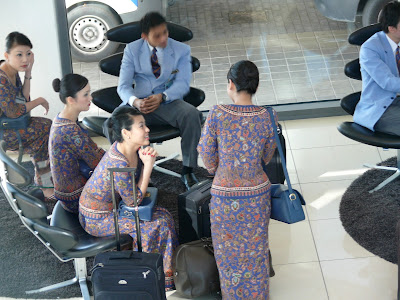 Singapore Girls in lobby of hotel in Copenhagen, 2008

In the Summer special of the Volkskrant was an article about the stewardesses of Singapore Airlines. These flight attendants are better know as 'Singapore Girls'. The name Singapore Girl is not a nickname, but is the official term for crewmembers of Singapore Airlines (SIA).
There is a lot of controversy around this name and what it stands for. SIA is the only airline company that actually hires on appearances and is being open about it. Is this a bad thing? If you know you get hired because you fit the code (size 6, flawless skin and always helpful and gallant).

The title Singapore Girl was new for me. I knew them as the pretty girls from Malaysia Airlines that had batik uniforms. My grandmother told me about these pretty girls and they always travelled with their airline company when they went to Indonesia.
The first time I saw them in real life was in the lobby of a fancy hotel in Copenhagen. I think I might have squealed and I photographed them like paparazzi. I thought it was maybe a little weird for them, but my mother said that they were used to it, being the pretty girls of Malaysia Airlines and all.

When I went to Indonesia, I didn't look for the cheapest flight, but just booked Malaysia Airlines. Family tradition and to see the batik uniforms up close. Oh my, these pretty girls were beautiful, helpful, spoke great English and when my veggie-meal was not on the list, the most gorgeous of them all arranged a Indian vegetarian breakfast and told me it was from her country and hoped I liked it. If anything, these Singapore girls can only be bad for one's self esteem.
Below some advertisements of SIA, mostly from the seventies, the last one is from my 'Guide to Java' from 1974. 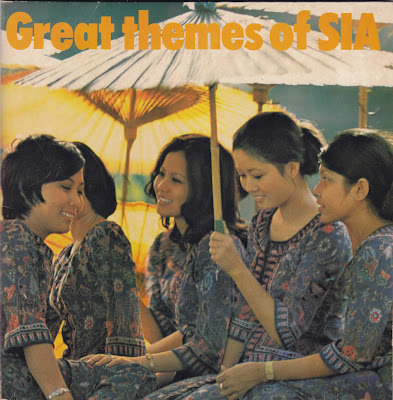 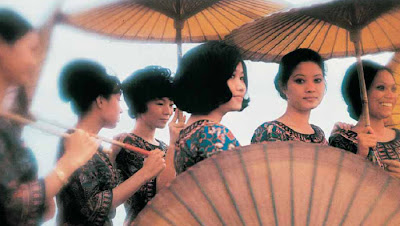 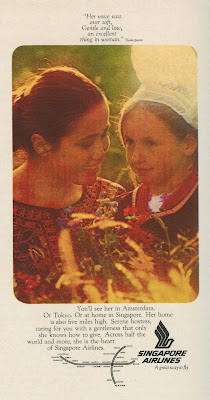 But of course what I love about the Singapore Girls the most is their Batik uniforms. I couldn't find information about the chosen pattern or if the original ones were actually batiked (they look printed on pictures), so I will keep you posted if I do. Below are some nice things I did found out, and if you are in the Madam Tussaud in London, please send me a picture of you with the Singapore Girl!

In her distinctive uniform, a sarong kebaya in batik material, the Singapore Girl is one of the airline industry’s most recognizable figures. Her timeless elegance has graced the Airline’s innumerous global marketing campaigns, constantly winning over travelers around the world.

Malaysia-Singapore Airlines ceased operations on 1 October 1972 and Singapore Airlines took over as its successor. Singapore Girl was coined in 1972 when Pierre Balmain, a French haute couture designer, was hired by Singapore Airlines to construct and update the Malay "Sarong Kebaya" as part of the cabin crew's uniform. His talent as a designer lay in his ability to make simple, tailored suits as well as grand evening gowns, all with the same aesthetic of slender and elegant lines. Balmain designed the iconic uniform of the Singapore Airlines Singapore Girl, loosely based on the traditional Indonesian kebaya.
Since then, the uniform has gained worldwide recognition as part of SIA's recognizable signature branding.

In 1993, she became the first commercial figure ever to be displayed at Madame Tussaud’s, the world-famous waxwork museum in London.
Madame Tussaud’s said that she was selected to reflect the ever-growing popularity of international travel. 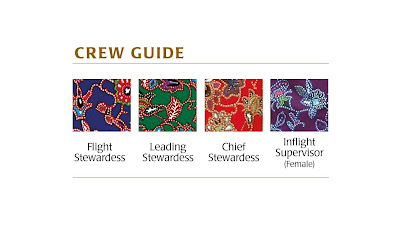 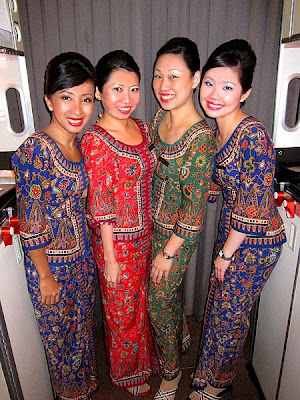 * Blogpost title based on the song 'My Little China Girl' by Iggy Pop
** Information from the Singapore Airlines website www.singaporeair.com and Wikipedia 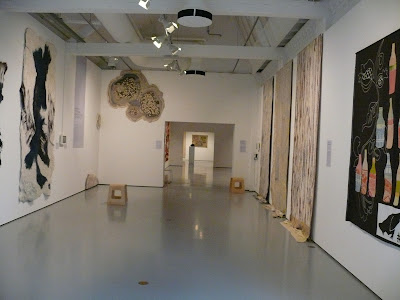 'Eye on nature' exhibition at the Textielmuseum in Tilburg*
Susan and I went to the Textielmuseum in Tilburg to look at carpets and to make a Inuit or Japanese doll last week. "Wall hangings are back in a big way. Designers and artists have rediscovered a passion for these interior textiles. With Eyes on Nature: wall hangings, the TextielMuseum illustrates the evolution of Dutch wall hangings in the past 50 years. The exhibition ranges from realistic and abstract works, to rough and narrative modern pieces. The focus is on the depiction of nature", according to the Textielmuseum.
The wall hangings were nicely shown and gave it a When-I'm-grown-up-I-will-get-me-a-big-white-wall-to-hang-a-nice-wall-hanging-on feel to it. The evolution was for my taste to much focused on abstract tapestries, but I really liked that there were very different kinds of wall-hangings.
I especially liked the wall-hangings by Hella Jongerius. The re-use of old fabrics (for the bottles she used blankets) to make hip designs and the pieces for the IKEA PS collection show a great way of making new things without only consuming. 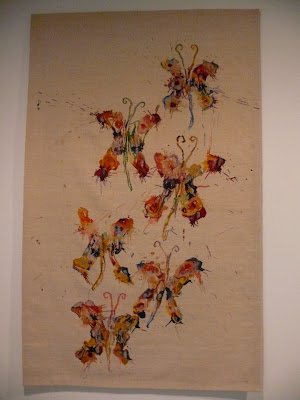 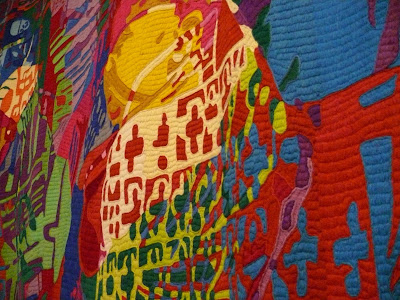 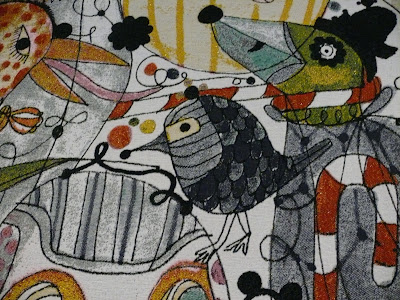 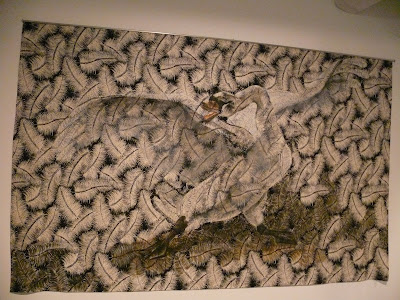 "Threatened Swan" by Wilma Kuil, 1990. Wilma Kuil uses printed cloth and paints on top of that. This work is based on the painting by Jan Asselijn 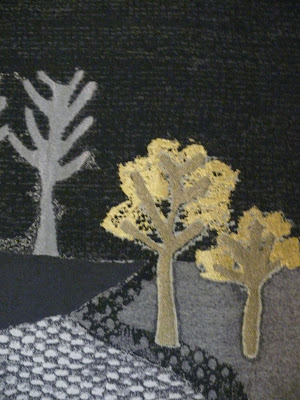 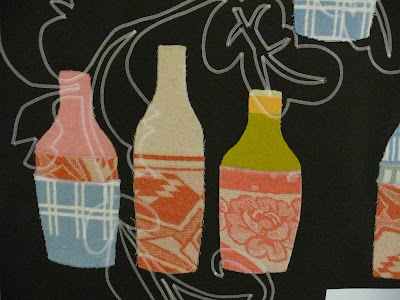 "Paravent (#7)" by Hella Jongerius, 2005. For this carpet secondhand blankets are used with the needle-punch technique 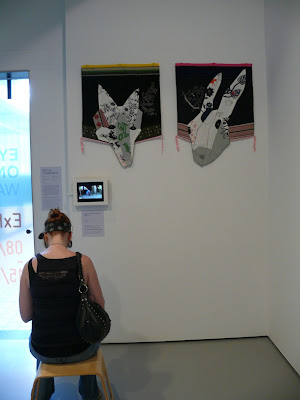 Susan next to 'Pelle' and 'Mikkel' from the IKEA PS collection, 2009

These wall hangings by Hella Jongerius are made during a IKEA-Unicef project that helps Indian women to earn a living and meet other women while their children attend school. The wall-hangings result from both industrial and craft production and honour the role of the craftspeople, as each specific fabric carries the name of the woman who contributed to it. The images are taken from Swedish fairy tales, a reference to IKEA’s homeland.**

Hella Jongerius way of working reminded me of another great carpet-project, Carpet of Life***. The Carpet of Life concept is based on traditional Moroccan carpets called Boucherouite or Boucherwi, made by most families from nomadic background. This traditional way of making carpets almost disappeared. Textiles to create products are hard to come by in isolated parts of the world. The Carpet of Life concept works with secondhand clothing, not anyones clothing, but someone's wardrobe. You send your old clothing and they make a carpet from it. You can choose your own (abstract) design and what clothing is used were. The traditional way of making carpets in the Sahara is being protected while a custom made product is being created. A wonderful combination of re-use, re-consuming and re-enjoying!

The exhibition 'Eye On Nature' at the Textielmuseum in Tilburg is till 15 september. Below some pictures of the making of carpets from Carpet of Life. 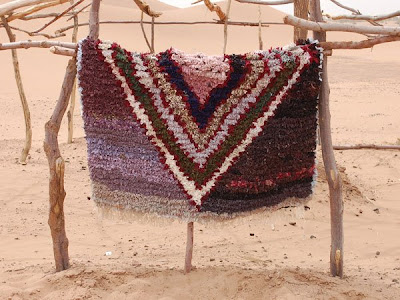 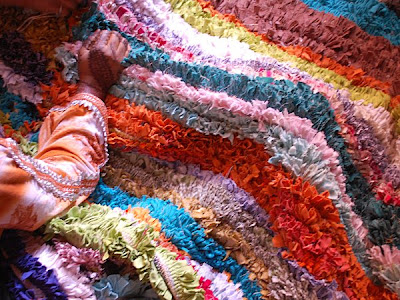 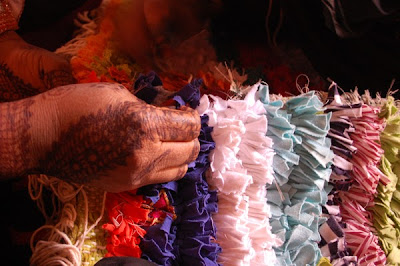 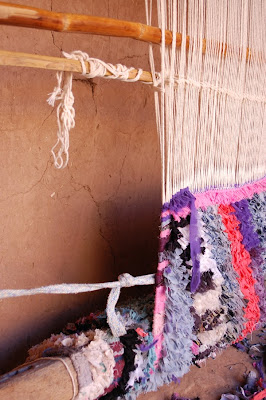 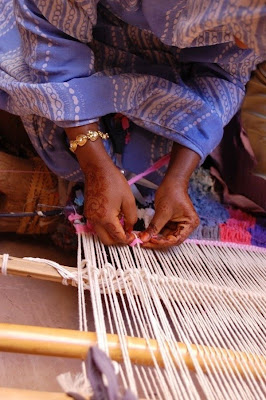 * More about 'Eye on nature' on www.textielmuseum.nl
** Information from www.jongeriuslab.com
*** More about Carpet of Life on www.carpetoflife.com 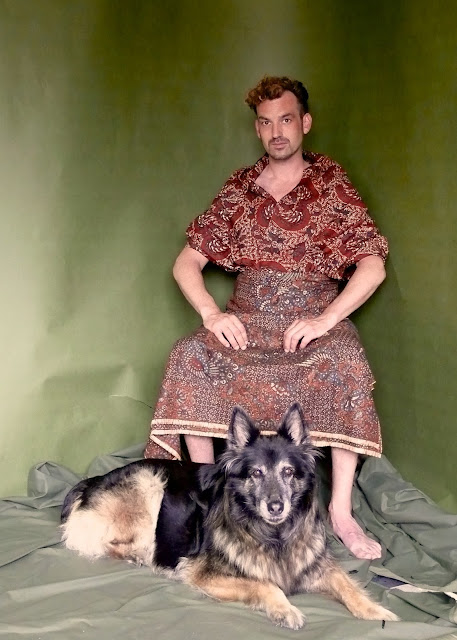 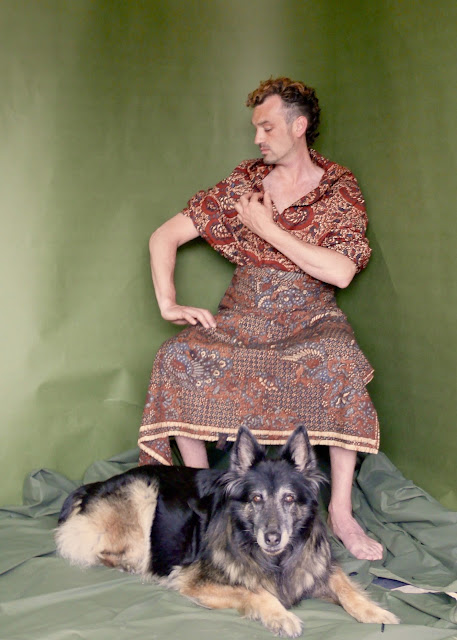 Photographer, performer and make-up artist Remick asked me to make his Batik Statement. We have our studios in the same building, and so we talk a lot about our ideas, plans and artistic problems.
Remick makes these big, epic costumes for special occasion like Cultuurnacht in Breda*. In his performances and his outfits he noticed that he is always referring to his roots. Not consciously, more from the genes. The movements of Javanese dancers and shadows like Wayang dolls. Also the headpieces and other ornaments have a strong Asian feel to them.
To explore his Indonesian roots more he asked me to dress him up in Batiks. He was also my model during the Batik Statement Fashionshow**.

On the photos he is wearing Batiks from Madame Rosielle-Bergsma collection, which I also used during the Batik Statement Fashionshow. His dog Sonja turned out to be a great model as well. Thanks Mickel for your Batik Statement!


Got inspired? Get your Batik on! Make a picture of yourself wearing your favorite Batik and send it to me by email or post it on my Facebook wall. For inspiration see the previous 'Batik Statements' (tip: sunny, nice locations, lots of colors and good memories).