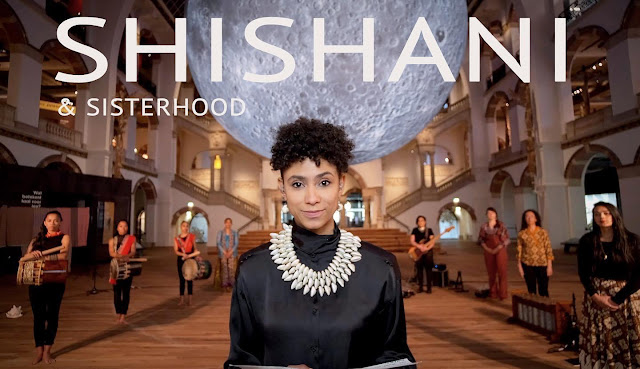 How stories can return to you and find a new stage, a way to be re-told that you could have never imagined. That happened to me with the amazing storytelling concertfilm project 'Shishani & Sisterhood'.
I think I met Shishani the first time during an event in Den Haag, I saw her perform a couple of times after that and was every time moved by how she takes an audience with her on a journey. She sings in multiple languages, most unknown to me, yet I fully understood the emotion and point she wants to put across.
Shishani was invited to perform at Erasmushuis in Jakarta (ID), but because of the pandemic it was decided to broadcast it instead.
She wanted to dive into the complex and confronting shared history between Indonesia and the Netherlands to create this show and to collaborate with musicians and artists based in the Netherlands that have a connection to Indonesia  When she asked me if I would like to join this project and share Batik I was like, Yes!, but also wondered if I should be part of it. I do not take this shared history lightly, so I shared my thoughts on this also with Shishani. To share about Batik in this project is such a great opportunity, not just for me, also for the Batikmakers I want to give a stage to and the many stories that are in need of re-telling. So yes I was very happy to join.
The plan originally was to use the Batiks as a kind of set-design backdrop. But because Batik is surely not a representation of the whole of Indonesia, we figured the Batiks should just be a segment in the program. We had a rehearsal a week before the recording in the amazing Gamelanhuis in Amsterdam. It was great to be in a room surrounded by a full Javanese and full Balinese Gamelan. It was the first time we (almost) all met, spoken word artist Tieka Masfar, musician Wulan Dumatubun, dancer Asih Sungkono and bass player Jaimie van Hek. Being surrounded by musicians, a poet and a dancer brought back many memories of when we were creating 'Dance in ricecarpet', already 10 years ago. 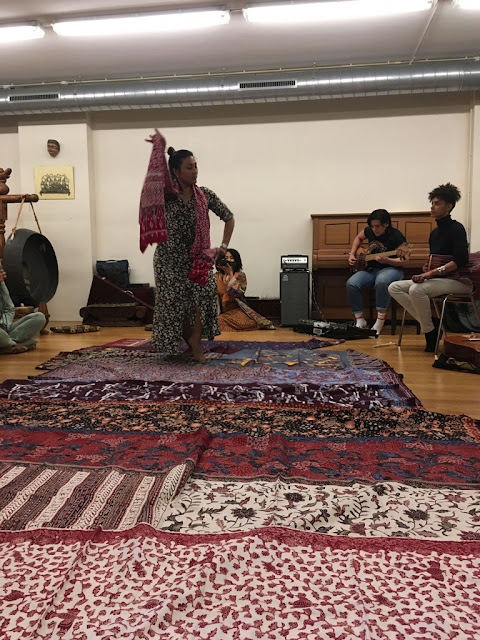 Rehearsal at Het Gamelanhuis in Amsterdam
As a collaborative inspiration Shishani choose Raden Adjeng Kartini & Dewi Srikandi. When she told me, I was like, that is so great, because both have a strong connection to Batik. Raden Adjeng Kartini as a promotor and maker of Batik and Srikandi the name of Ibu Ramini's batikworkshop in desa Jeruk. During the rehearsal I laid out the Batiks to display them to the others. I told a little about me and what story I would like to share. I used the blogpost I wrote on Kartini from 2015. I thought it would be nice if her role in Batik history, also in providing knowledge about it in the Netherlands, could be share in this project and in the Tropenmuseum, our stage for the show.
The laid out Batiks turned out to create a nice stage for dancer Asih to preform on. Shishani suggested she might use movements from 'Tari Batik'. Everything came together in that moment.
So now I had to tell my story while laying out the Batik. I wrote my text, practiced saying it together together with folding open 9 Batiks, each Batik representing one of the performers, over and over again the week before the recording.
I also went to Amsterdam to pick up an outfit. A Guave suit made with Batik Tulis from Lasem (ID) and an old pink/coral woven fabric from Enschede (NL). I had the suit reserved already a year ago, thinking I would have plenty of opportunities to wear it in 2020... But nevertheless this was the perfect moment! 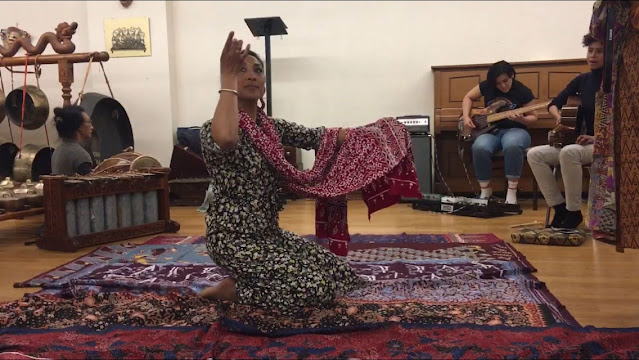 Dancer Asih on the Batiks 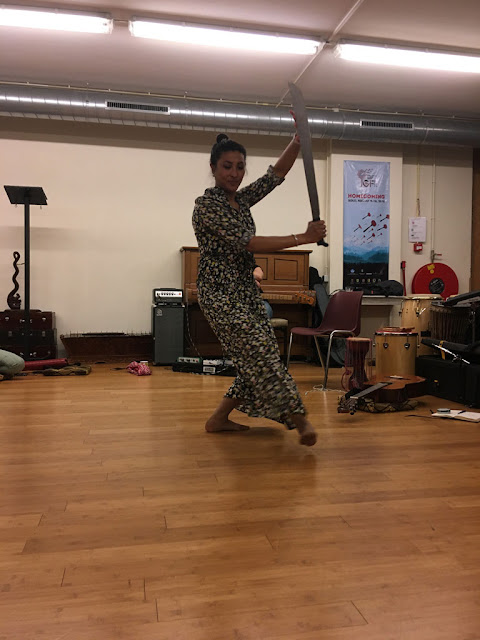 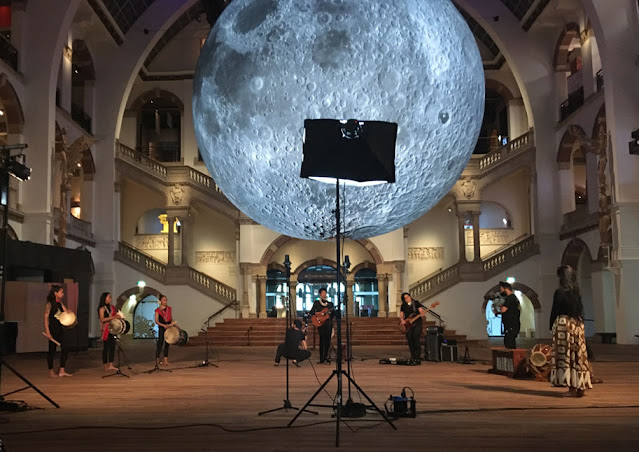 Quick shot between takes of the show at Tropenmuseum
On Sunday 11 April 2021 we had our recording day at the Tropenmuseum. Being in a museum after not being able to visit museums after so long is surreal and awesome. Of course I was here before to visit the depot, but I haven't been inside of the museumpart of the building since I think the opening of the Bali exhibition in Februari of 2020.
In the 'Lichthal' the main big hall of the museum hangs the temporary artwork 'Moon' by artist Luke Jerram. Part of the exhibition 'Healing power' and a perfect centrepiece for our performance.
We had only a short amount of time, which included the run-through, set-up of technique and building off again on time. Al was filmed by Beyond Walls and recorded by Waargebeurd.music. Running behind schedule, I had only two takes, with my heart bounding I manage to remember my words, trying not to make to much noise (the first take my sound was not good because my earring hit my mic) and try to act like I do this every day, hehe.
Being in this space, this colonial space, and hearing the music, the words, seeing the movements of the dance was so, so powerful. The sound of the tifa of Tiga Batang Rumah echoing through the huge space. Shishani's voice sometimes not more than a whisper still carrying all the weight of the words. It was intense and moving, it was needed and felt it was healing this space in a way.
I am so happy Batik is part of this Storytelling Concertfilm. Kita bersama!
Ayo, go watch the show, enjoy!

Some stills from the film 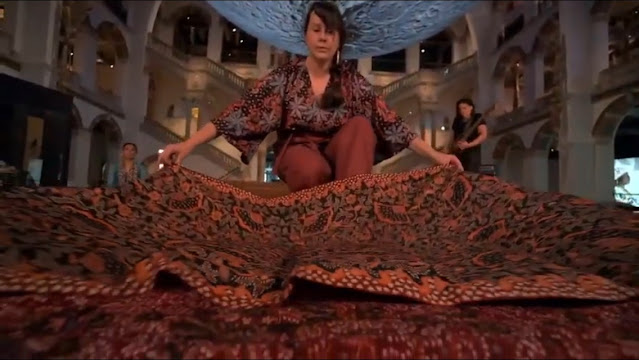 Me laying out the Batiks 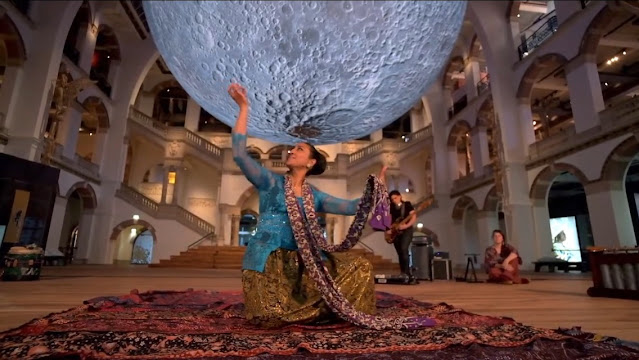 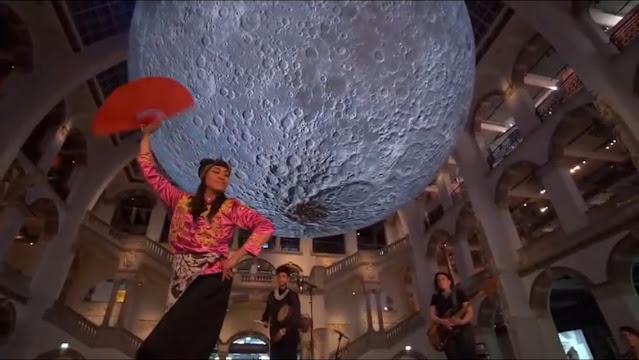 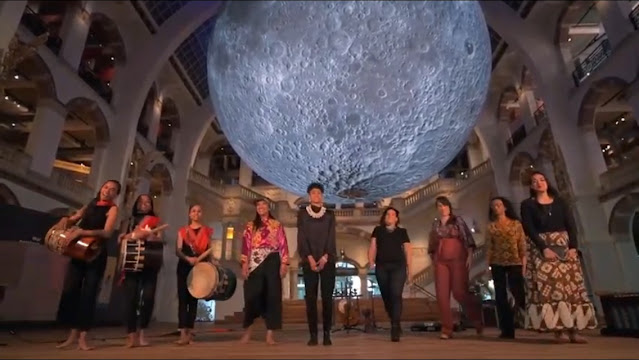 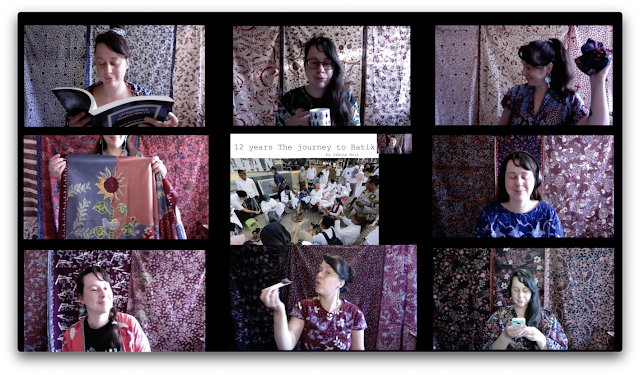 A Batik Statement for this years birthday of my blog 'The journey to Batik' had to be an online meeting!

21th of April 2009 marks the starting date of my blog, first started in Dutch, so it become the long website link www.dereisnaarbatik.blogspot.com

This 21th of April I celebrate 12 years of blogging on my blog and 12 years of my journey to Batik. My blog is now on the more easy link www.journeytobatik.org

I want to thank everyone who has been following my journey! Thank you for your support, guidance and appreciation through out these years. The last year was tough, for everyone and also for Batik. Batikmakers have it extra hard during this pandemic. Batiks mostly get bought for special events like weddings and through tourism, which came to a full stop last year and haven't improved since.

So on my blogs birthday and on Kartini day, all my warm wishes to all that make, support and buy Batik.

To many more years of continuing my journey to Batik :)!