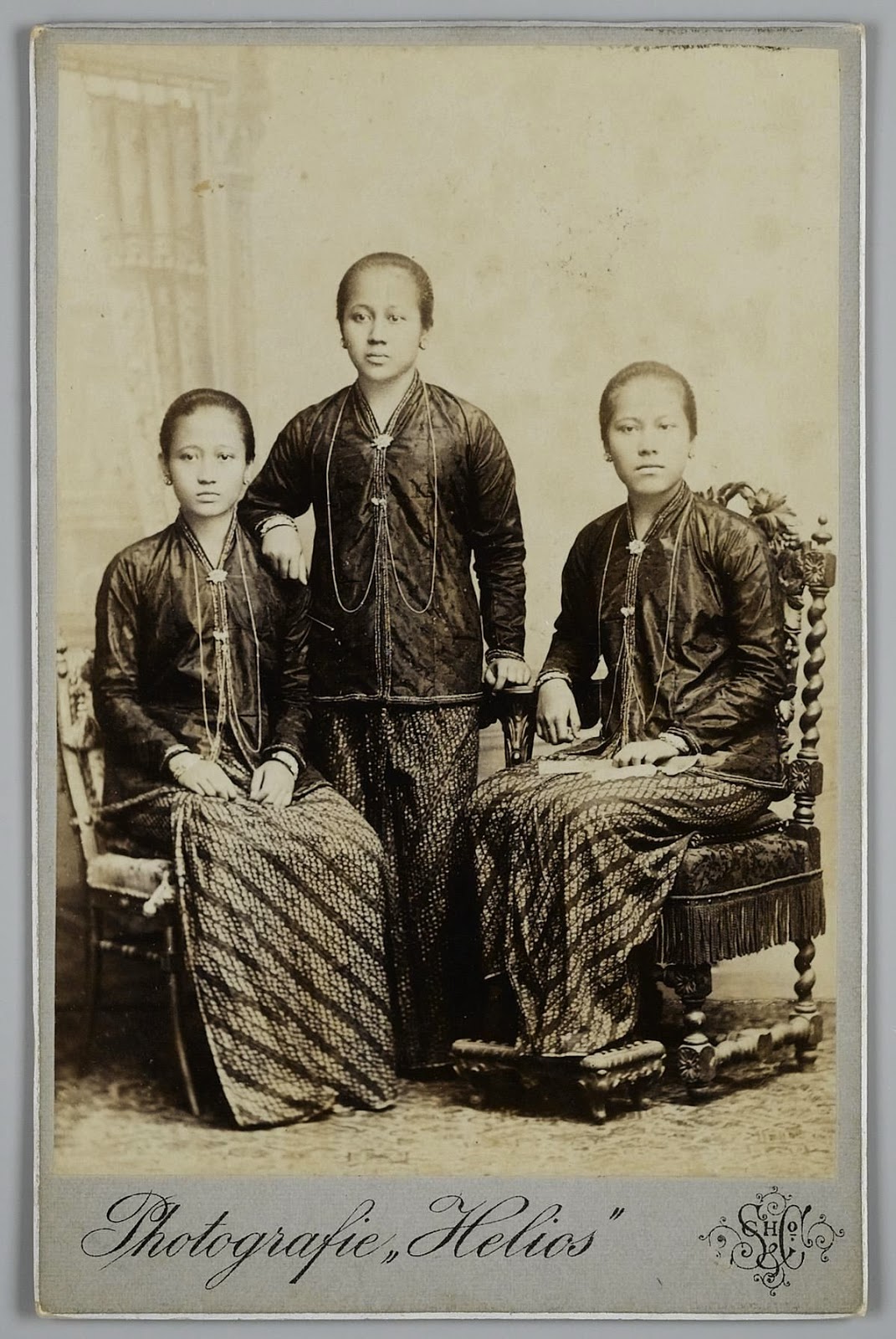 Kartini, in the middle with her jonger sister Kardinah and half sister Roekmini,
in Semarang, Indonesia, 1900 (KITLV)


Tomorrow Hari Kartini or in English Kartini Day is celebrated. Kartini Day is an Indonesian holiday commemorating the birth in 1879 of Raden Adjeng Kartini, one of the country's national heroes and a pioneer in the emancipation of Indonesian women. Throughout Indonesia women wear their national dress, sarong and kebaya, to symbolize their unity, and the nation enjoys parades, lectures, and various school activities.
Kartini was a freedom fighter for equal rights. Not just for women, but for her people to be able to study and in that way grow on the social ladder.

In 2013 I had the honor of celebrating Hari Kartini with a Batik Statement Fashionshow. I used that day to honor the Batikmakers from the Batik Belanda period, like Maria Paulina Carp, Lien Metzelaar and Eliza van Zuylen. What I didn't know was that Kartini made Batiks herself. 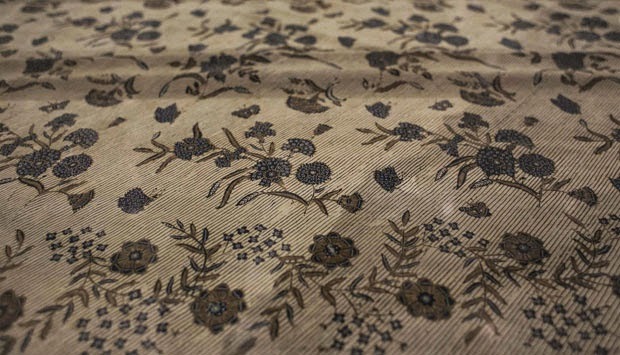 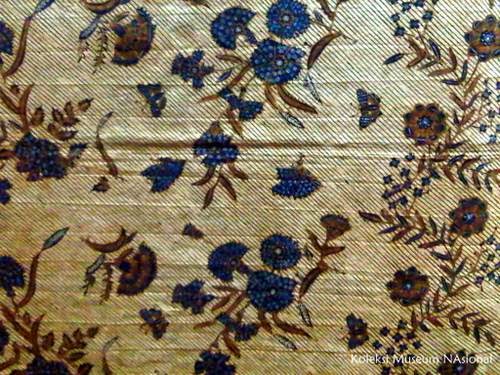 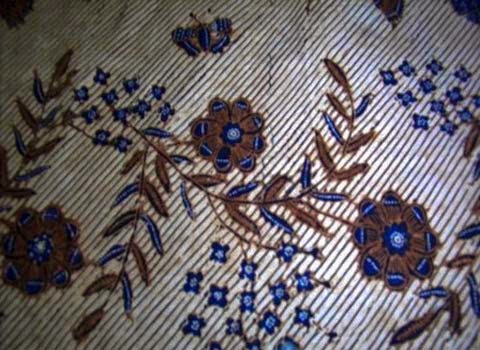 Batik made by Raden Ajeng Kartini, around 1900 (images found online)

As daughter of a Regent, her father was Regency Chief of Jepara, she and her sisters learned how to make batik from regency's batik makers. Possessing the skill to make Batik was the same as embroidery in Europe, noblewomen could show their patience which was a attractive quality to possess.
The Batik I found online and in 'Batik Belanda' by Harmen C. Veldhuisen is surprisingly modern. A Kain Panjang, 250 cm by 102 cm, with on it two kind of flowers, European carnation (anjers) and a more 2D flower which was pretty common in Batik Belanda in that time, in a fine, lined brown and white background. Small butterflies are also placed in a repetitive pattern. In 'Batik Belanda' is noted that she wore this batik when visiting Dutch friends. In other books and articles is noted that she wore strictly batik keratonan, Batiks for noble. On the pictures she is often wearing parang motif. Parang motif sometimes referred to as the keris or sword pattern by outsiders, the Javanese call the Parang motif 'lidah api', or tongue of fire. Parang are one of the most powerful of batik motifs with their strong parallel diagonal lines.
One theory why she made this for her unwearable kain, is that it was her way of 'rebelling' against feudal culture. 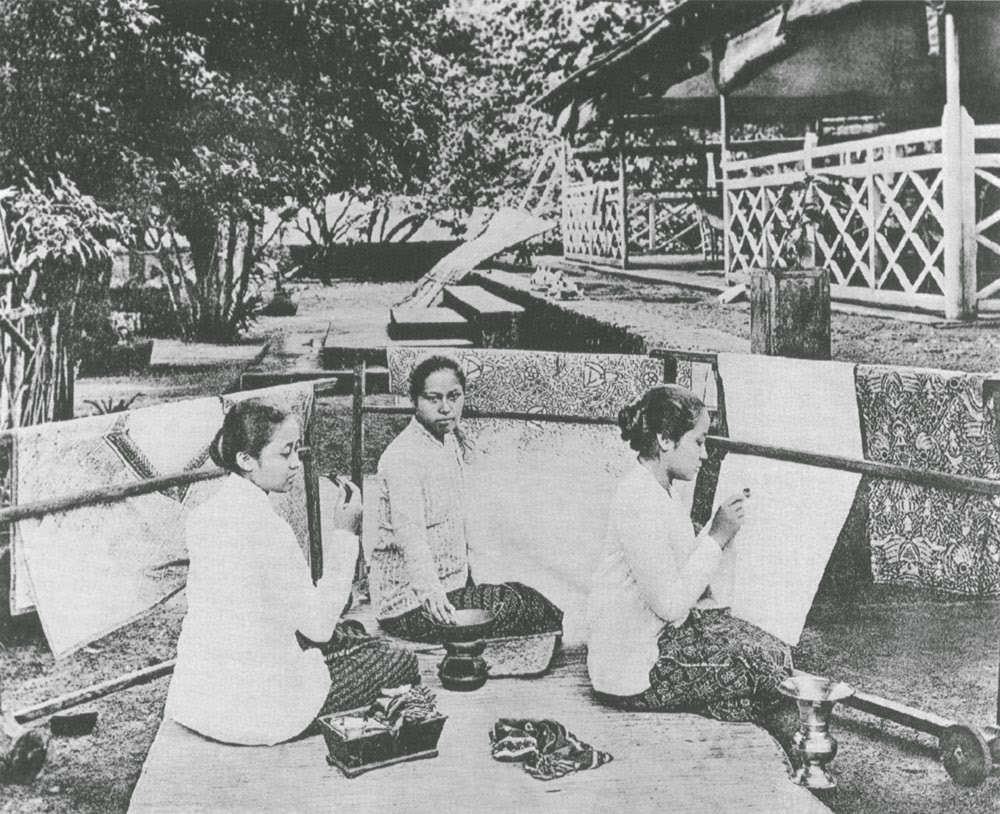 A photo of Kartini making batik with her sisters Roekmini and Kardinah in a garden from around 1898 was brought to the Netherlands by her brother Kartono. The image was used in 'De batikkunst in Nederlands-Indië en hare geschiedenis' by G.P. Rouffaer and H.H. Juynboll, many publications about the Dutch Indies and as a 'schoolplaat'. A 'schoolplaat' was a drawing or photo used in schools to visually support different subjects. The names of Kartini and her sisters weren't added to the schoolplaat, only "Teekenen met was voor de Batikweverij Java"/ "Drawing with wax for the Batik workshops Java". This image formed for many schoolchildren the idea of how women in the Dutch indies lived. An absurd synchronicity to say the least.
In the same year, 1898, De Nationale Tentoonstelling van Vrouwenarbeid, The Dutch National Exhibition of Women's Labor took place in Den Haag. Kartini had close connection with the Dutch women movement and made a contribution for the exhibition consisting of different Indonesian crafts like woodcarvings, painting and batiks including works from her own hand.
She also wrote an essay about the Art of Batik. This paper explaining the technique was according to the book 'Feministische Openbaarheid' not used for the exhibition. This didn't sit well with Kartini and she was very happy when she got the news that Rouffaer and Juynboll were going publish it in their book about the Art of Batik. However, in the actual  'De batikkunst in Nederlands-Indië en hare geschiedenis' her text was used, but not as an article. It is unclear which text belong to her. In the preface they praise Kartini knowledge and expertise, but her paper was only partly used and also her input on feminisme for the 'Nationale Tentoonstelling van Vrouwenarbeid' got lost.
I read in an article online a different set of events. Not only was her article with the title 'Handschrift Jepara' present at The Dutch National Exhibition of Women's Labor. It fascinated Queen Wilhelmina who read it at the Java booth (the part of the exhibition about the Dutch Indies). 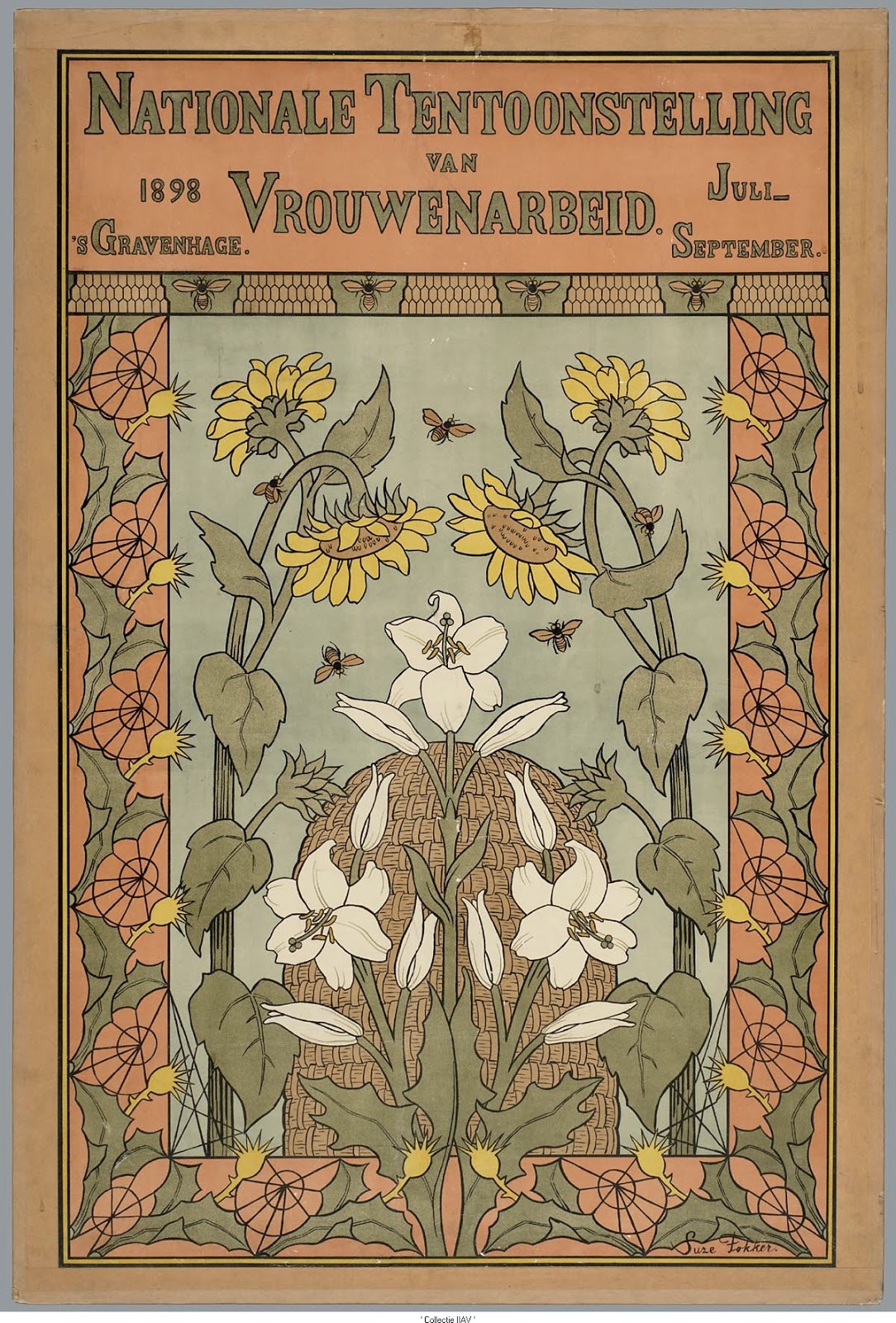 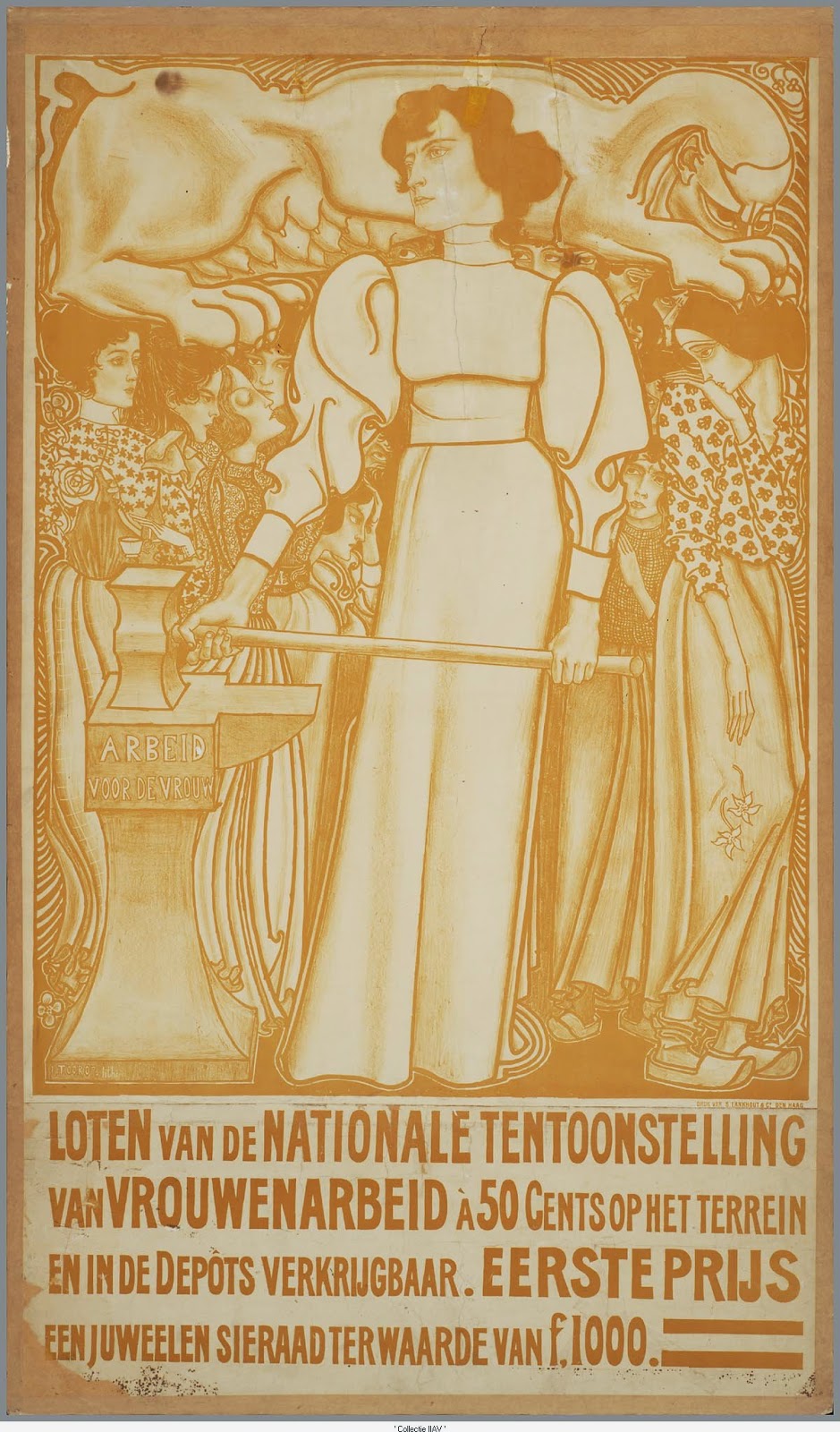 Design by Jan Toorop. There was a lotery during The Dutch National Exhibition of Women's Labor and the Grand price was jewelery. The design is at least tougher...

Wauw, do I prefer that last version. I can't believe that they didn't see at the time what her written words and presence meant for the world. And that it was only a few year later that her written words made such an impact.
Kartini's dream was to study in Europe. When she finally got the news she was invited by telegram to follow her dream, it was one day to late. She just accepted Raden Adipati Djojo Adiningrat's, Regent of Rembang, hand in marriage. Her wish was very strong, but her love for her parents was stronger. She didn't want to disappoint or embarrass them. She was married on the 12 November 1903. Kartini's only son was born on 13 September 1904. A few days later on 17 September 1904, Kartini died at the age of 25.
After Raden Adjeng Kartini died, Mr J. H. Abendanon, the Minister for Culture, Religion and Industry in the East Indies, collected and published the letters that Kartini had sent to her friends in Europe. The book was titled Door Duisternis tot Licht/Out of Dark Comes Light and was published in 1911. It went through five editions, with some additional letters included in the final edition, and was translated into English by Agnes L. Symmers and published under the title Letters from a Javanese Princess.

I bought that book in 2013 to prepare for and to get inspiration for the Batik Statement Fashionshow. Her letters are very nicely written and this empowerment just pops off the page. She is one tough cookie!
I remember reading her strong words standing in this dull box of a working place waiting for costumers. Can't help but wonder now if she helped me to quit the slumber I was in.


"We will not, we cannot believe that our lives will be only commonplace and monotonous
like the lives of thousands of others before us,
and as will be those of thousands of those who come after us!"
- Kartini to Mevrouw Abendanon on 4th of September 1901

Have a great Hari Kartini everyone!
Celebrate the words Kartini gave us and make sure to never stop fighting for equality for all!


For my sources and to read more see: 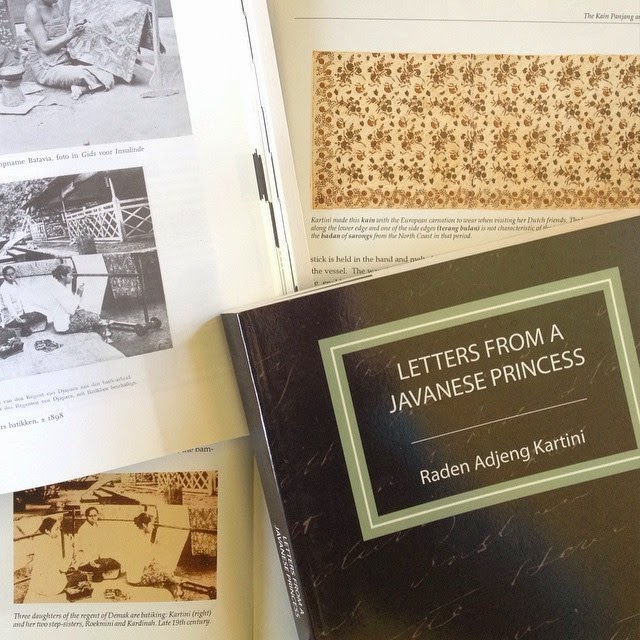 I'm glad I found this article. I've been looking for R.A Kartini photos with her sister in unofficial pose then it leads to your blog. Thank you for sharing