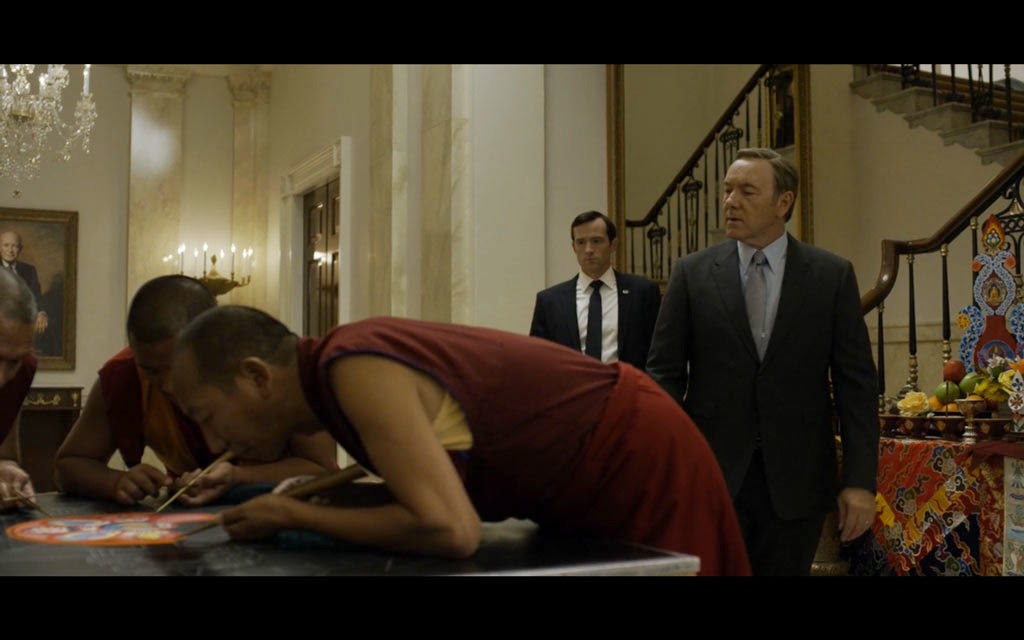 Still from 'House of Cards' episode 7*

Juggling with my time, I noticed that it is clear to me what I want to do with my time, I just don't have the time to do them all. Or at least not as much as I want to. So my blogposts will be less frequent, but I think it is more important that I can write a nice post once in a while, than not posting at all.
A subject that is bugging my mind lately is very intertwined with my own work as an artist. It is a subject I already wrote about previously, but I think it is interesting and helpful, probably mostly for myself, to write about it some more.
Ephemeral Art, or as I call it Temporary Art.
When I get the question: "What do you do?", I answer: "I'm a visual artist". People mostly pause and then ask me: "What do you make?".
When I start my process of explaining what I visually make, you have to remember I'm trying to create with words an image in peoples minds, who I just met, of what I make with my hands. In other words, what I make without using words and is meant to look at, I have to explain to someone who is looking at me mostly with a 'What?!'-face.
After explaining that my work is temporary, I never use Ephemeral and in Dutch 'tijdelijk' is the best translation of "temporary", I tell which materials I use. "I make installations on location using wall-paper and organic materials. With the organic materials I make carpets using things like rice, beans and lentils."
The number of times people reply "like Mandalas?" is uncountable (just as much as asking if I glue the materials...).
I never really know how to reply to that. I mean do I look like a Buddhist monk to you?
Not everyone that makes Ephemeral tapestries makes Mandelas. But I noticed at the same time that a lot of so called 'Ephemeral artists' do use the Mandala form to create their works.
So I thought before sharing temporary works of 'art' I discovered, saw and adore.
I will start with: What is a Mandela?

Mandala is a spiritual and ritual symbol in Hinduism and Buddhism, representing the Universe. In Sanskrit, the primary liturgical language of Hinduism, Mandala means 'circle' or 'of essence'. In various spiritual traditions, mandalas may be employed for focusing attention of practitioners and adepts, as a spiritual guidance tool, for establishing a sacred space, and as an aid to meditation and trance induction.
A mandala is made of coloured sand. Historically, the mandala was not created with natural, dyed sand, but granules of crushed colored stone. In modern times, plain white stones are ground down and dyed with opaque inks to achieve the same effect. Before laying down the sand, the monks assigned to the project will draw the geometric measurements associated with the mandala. The sand granules are then applied using small tubes, funnels, and scrapers, called chak-pur until the desired pattern over-top is achieved. Sand mandalas traditionally take several weeks to build, due to the large amount of work involved in laying down the sand in such intricate detail. It is common that a team of monks will work together on the project, creating one section of the diagram at a time, working from the centre outwards.
The destruction of a sand mandala is also highly ceremonial. Even the deity syllables are removed in a specific order along with the rest of the geometry until at last the mandala has been dismantled. The sand is collected in a jar which is then wrapped in silk and transported to a river (or any place with moving water), where it is released back into nature. This symbolizes the ephemerality of life and the world.**

In 2013 I was really exited because an actual Tibetan Sand Mandala was being created in Breda (NL). When I went there to document the progress of the carpet, I was so disappointed that the Mandala was not created free hand. The basic form was drawn on a wooden board with thick black lines and for me it just smacked the mystique right out of it.
When a few days later, they finished the mandala, I went to see the destruction ritual. The finished Mandala looked really nice. On top of the base form was now a detailed pattern of symbols made apparently free hand. The destruction ceremony was not very spectaculair, but it was nice that the audience joined in. They gave everyone a bag with sand which I gladly excepted. My hands were blue from the pigments and I couldn't help but think that this was a touristic version of the real ritual.

I decided not to make a post about it, till a few weeks back. While watching the evilness in 'House of Cards', I knew that I did need to share a little about Mandalas. They are so well known. And if they are used in a series that populair to represent good or goodness, it's good to know what they represent.
And to make clear that I do not make Mandalas. Using a temporary form of expression, always represents our temporary state on earth, but that is never all. The symbols, forms or kinds of material can represent many more things. In a way it is merely an material to express oneself and in a traditional sense there was no need to make everlasting ways of expression. Ephemeral Art is a rather new movement in art (well say starting the sixties) and is part of a long heritage of creating temporary works (and man is not the only creator).
Creating works that are temporary are not new, and are not all the same. There are many reasons why people create temporary works, and using temporary materials doesn't make it the same kind of work.
That is like saying all oil paintings are alike!

So to set the record straight, here are some artworks made on floors or on the ground, so like carpets, made from temporary, organic materials. They are Ephemeral Art, but definitely not a Mandela, although they have their location (lying down instead of hanging) and material (organic/temporary) in common. 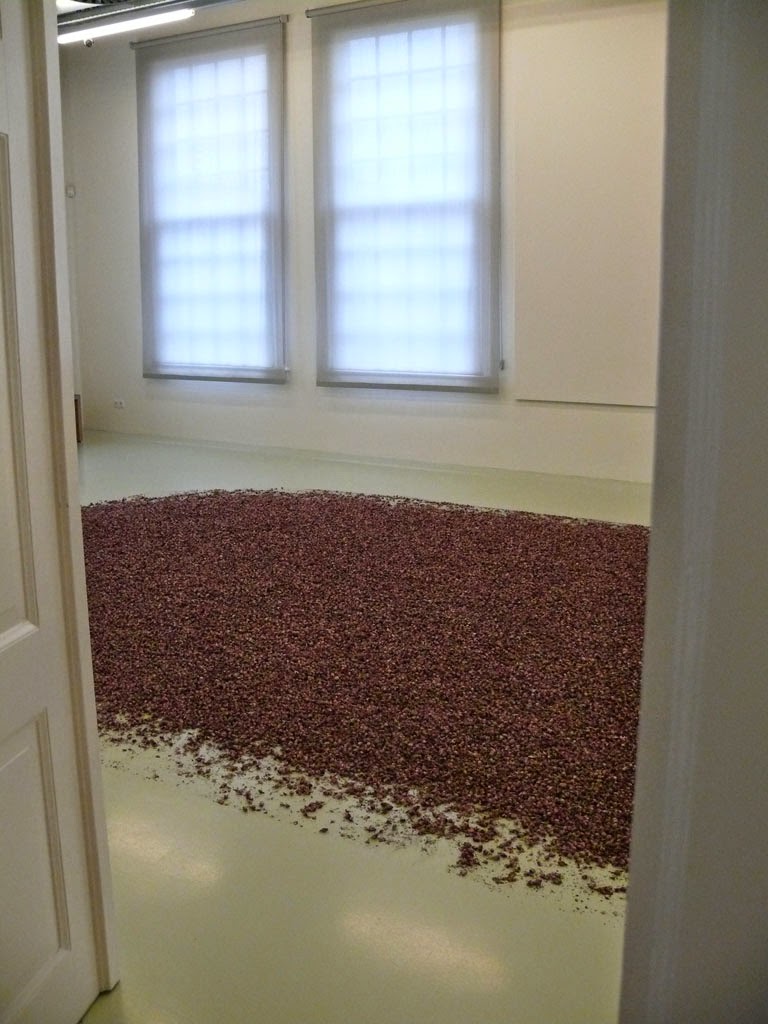 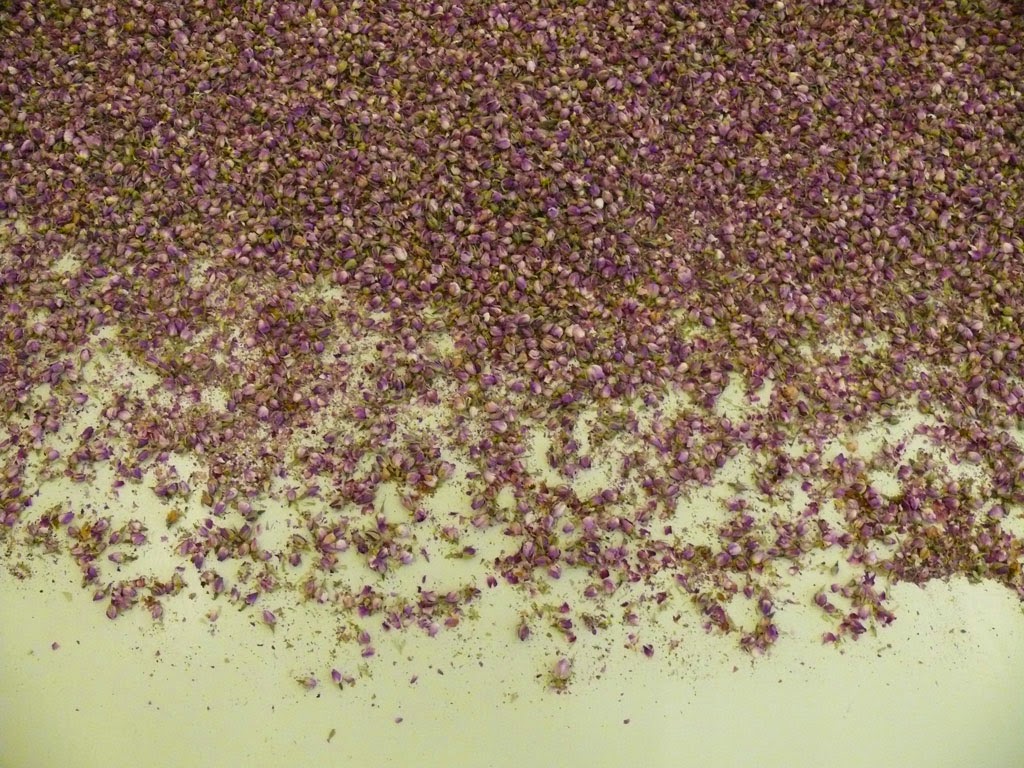 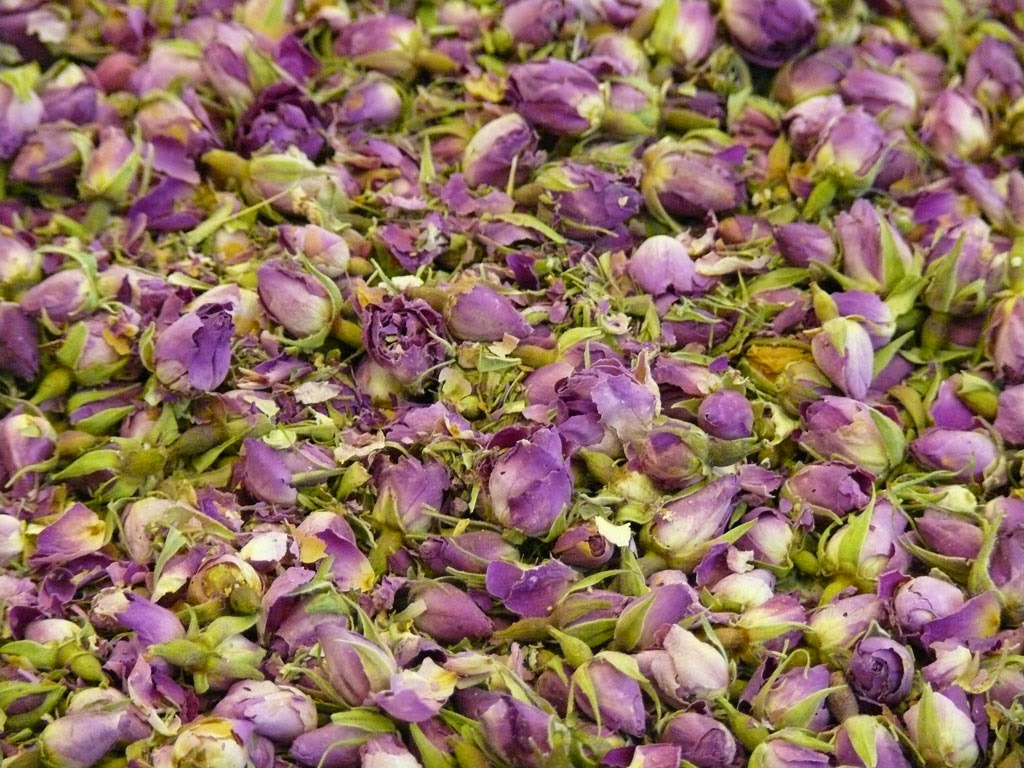 For my birthday on my birthday in October 2014 I went to see the solo exhibition of herman de vries in Schiedam. I say Schiedam, because his work was in the Stedelijk Museum Schiedam, the Ketelfactory and in a park between these two locations.
I first encountered his work when Emmy told me this wonderful story of a visitor walking into his lavender carpet in Enschede (see and read in the post "Lavender floors and muddy walls"). When I went to see this carpet myself, I followed my nose through the halls of the museum, till I found this big rectangular purple piece on the floor. I was in love!
In the Stedelijk I really tried not to run through the hall to go straight to his roses carpet. When I finally got near some other people were in the room. So I waited till it was empty, closed my eyes, stepped in and just took a deep breath. Roses are not really my thing, but the way this art work works, is!
herman de vries is representing the Netherlands at the 56th International Art Exhibition – La Biennale di Venezia. Under the title to be all ways to be the Dutch pavilion will exhibit new sculptures, objects, works on paper and photography by de vries. If you are going, please send me a postcard (or a photo on Social Media) of his work!***** 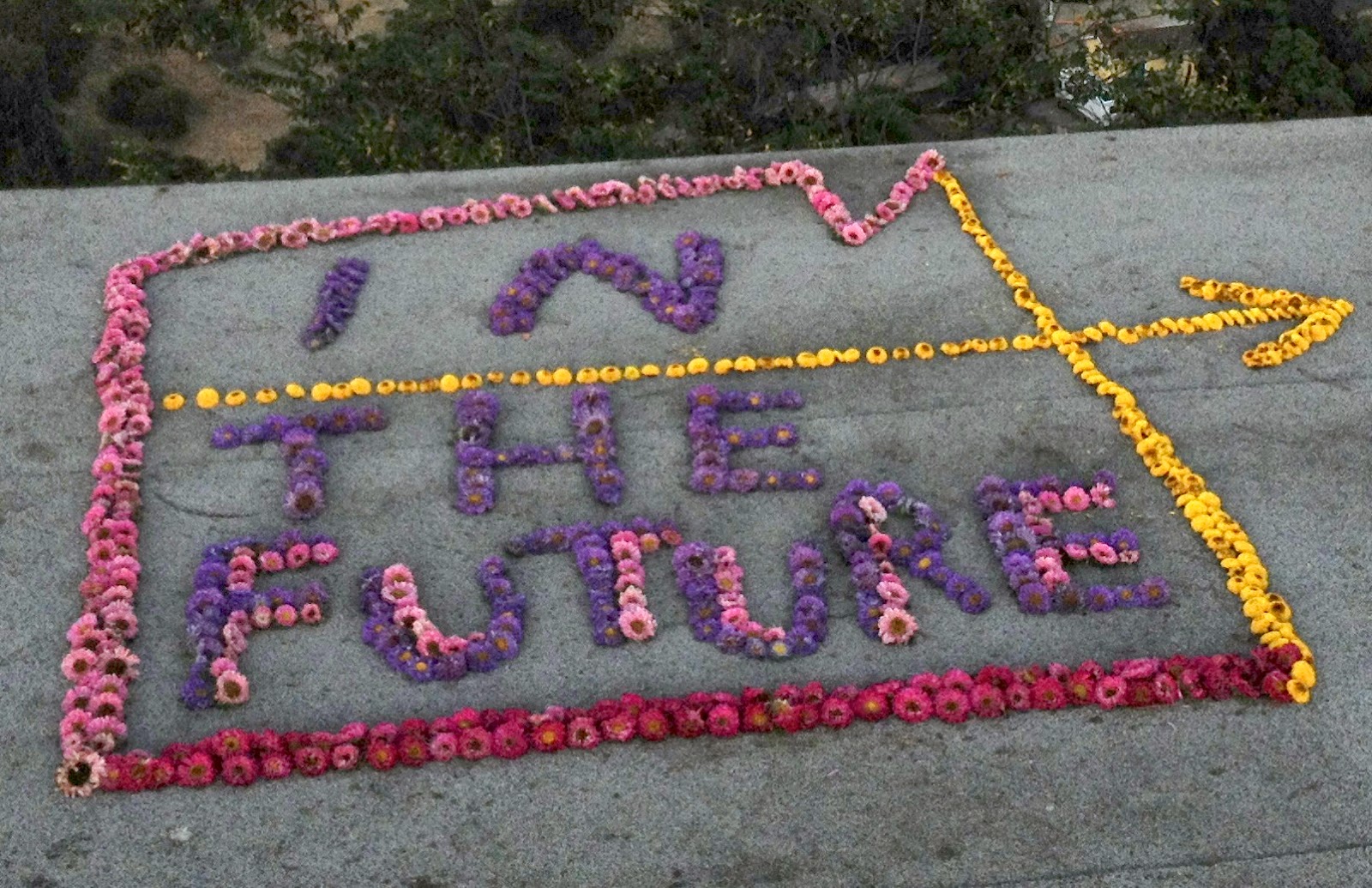 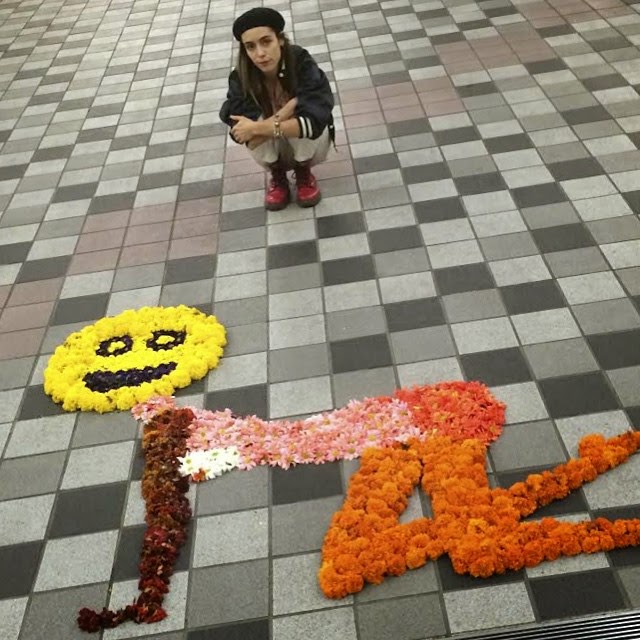 Next up, Lola Rose Thompson. A (Onooo I have to say it now..) young artist from California whom I discovered on Instagram. She makes short statements and female forms out of flowers. Her work is fun, colourful and really now. First I was jealous and now I just like it very much! She has her own rough style and I'm looking forward seeing where her temporary art-road leads her.******

And saving the best for last, or better said the-art-piece-that-almost-made-me-quit-my-job, the sand carpet created by this little Japanese pufferfish. This little guy makes an extraordinary sand sculpture to attract and win a mate.
This circle of love is unbelievable. My number one temporary carpet maker was the Bowerbird, and still is, but this fish definitely blows my mind when it comes to making Ephemeral Art.
I'm so happy suddenly that my last name is a fish!


* Blogpost title from episode 7 of 'House of Cards'
** Information about Mandela from Wikipedia
*** A (glued) Tibetan sand mandala at Wereldmuseum Rotterdam
**** Read on page 166 of Design by Nature how to "Create a personal mandala"
*****More about herman de vries at the biennale on www.mondriaanfonds.nl
******More temporary works by Lola Rose Thompson on www.lolarosethompson.com
*******More temporary carpets I spotted on TV in the previous post "Temporary carpets on unexpected places"