Europalia - Power and other things at BOZAR 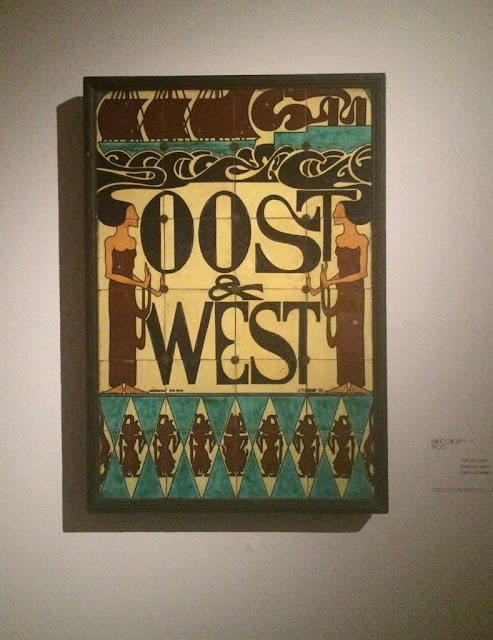 My second visit to one of the Europalia exhibitions was mixed with joy and surprise. I made a second visit to the growing installations at WIELS, looking forward to the next step in the work by Ada van Hoornebeke and Maartje Fliervoet & seeing my beans grow. I started my morning with receiving a gift bag by Europalia which I won entering a competition online. The bag included a wonderful purple umbrella and a miniature boat of which I saw the original big one later in Liège.
I just finished reading the biography of Gerret Pieter Rouffaer (1860-1928) by Frank Okker to help me with my research. His life and legacy is something I'm exploring now to find out more about Batikmaker Carolina Josephina von Franquemont (1817-1867). So when I entered the exhibition 'Power and other things' fully expecting "modern art", I was pleasantly surprised entering at 1865 with two paintings by Raden Saleh (1811-1880). It was as if I continued in the timeframe I already was fully immersed in. And not only that, with strong markers, pieces from history, that matched the storylines in my head.
The paintings by Raden Saleh show the strength and power of the Merapi volcano. One shows an eruption at day, one at night. The Merapi is a very visible marker in the landscape on java. When I was on Java in 2016 Merapi was blowing smoke the whole time. Merapi was for me the 'I'm almost home' point. Having my temporary home in Sleman, it was every time a relief finding that Merapi hadn't erupted. Raden Saleh's paintings visualise the eruptions both beautifully and terrifyingly well. 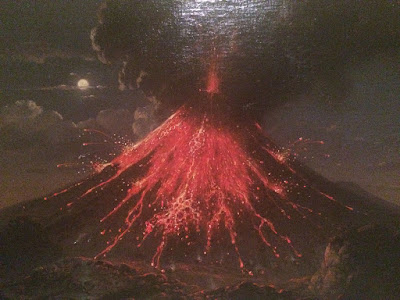 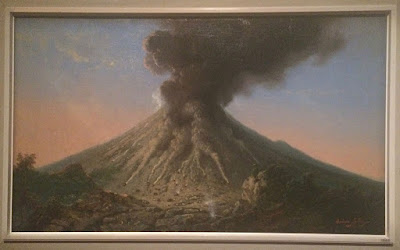 
Next up was Jan Toorop (1858-1928). Where Raden Saleh represent the Javanese artist getting praise outside Indonesia and more specifically in the Netherlands for showing us true Javanese culture. Jan Toorop is the Javanese born-artist getting praise for being Dutch...He left an interesting body of work in which his roots clearly shine through, however he is always seen as an Dutch symbolic artist with a interest in Indonesia. It really emphasizes the Dutch view on their colonies and the people that were a direct result of these colonies. By only looking at the Dutch, it feels like there is no room for this shared heritage, this mixed history and what it meant.
There were different wonderful works on display and a photo album showing portraits of Jan Toorop. My favourite work had to be Toorop's Batik Statement. The young artist, 22 years old, sitting in room covered with batiks, surrounded by different objects, looking at the ground as if lost in thoughts. 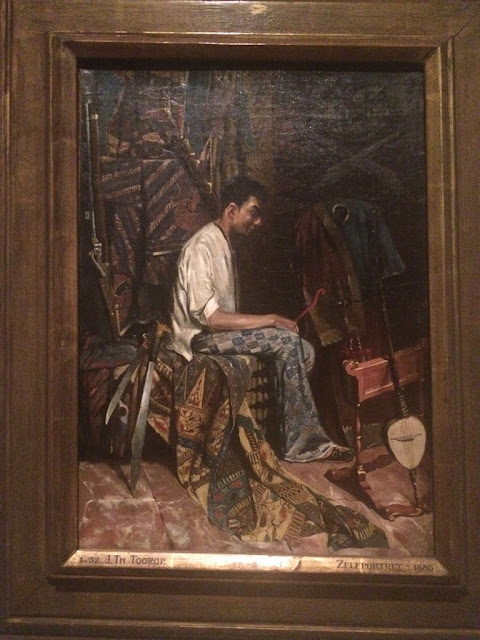 The photo I started this post with is of a tile tableau designed by Jan Toorop in 1900. I know this image as long as I can remember. It is always used when showing the "fusion" of East & West ("Oost & West"), Indonesia and the Netherlands. I always thought of it as such a cliche, not realising what the image actually was (See the sketch of this work in this post). As I mentioned above, I was and am fully submerged in between 1850 and 1910. Only two weeks before I was standing in front of this work, I was flipping through an catalog of an exhibition about "Nederlands-Indische kunstnijverheid" ("Dutch Indonesian crafts") organised by and at 'Oost en West'. This tile tableau was made specifically for their location, a gallery for showing Art from Indonesia. Rouffaer was one of their experts, writing about and sharing his knowledge on many subjects. Batiks from the batikworkshop of Raden Saleh's wife were on display in the gallery. Oost en West was a place with a group of people with whom, if it was today, I would probably hangout all the time. 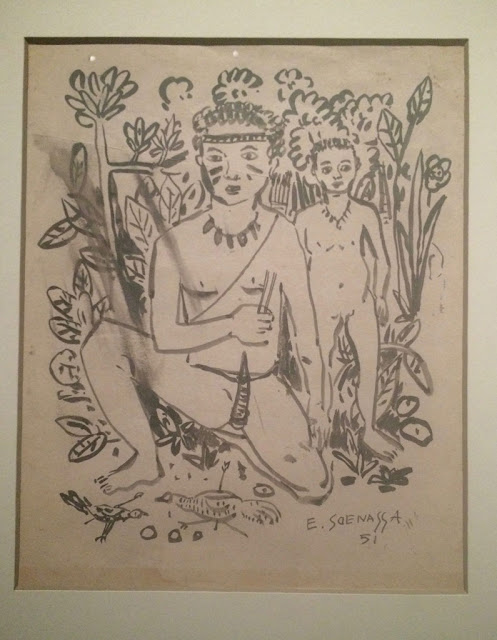 Next to this visit back in time, there were certainly artworks from a nearer past that were just as inspiring. The fast sketched drawings by Emiria Sunassa of Papuan men stepping out of the jungle, showing there hunt trophies. The style is simple and so fresh. 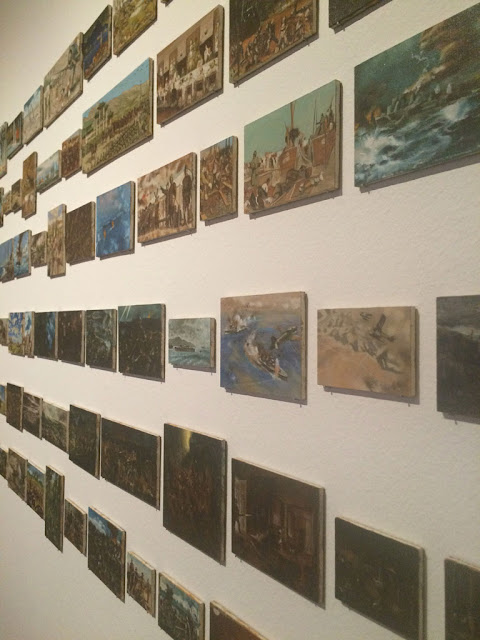 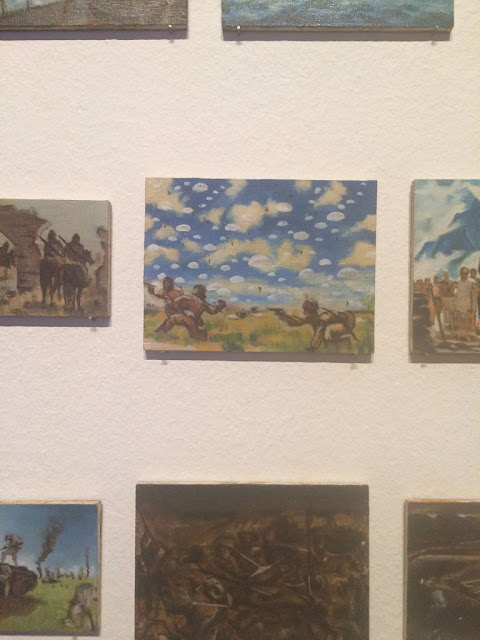 The miniature paintings by Japanese artist Makoto Murata are small copies of 153 war paintings,  sensōga , in the collection of the National Museum of Modern Art in Tokyo. Displaying the sensōga let to different conflicts and the museum has an ongoing issue with ownership of the paintings. Murata's tiny copies allows people to view the entire collection and look back at the history of the Asia-Pacific War (1913-1941). 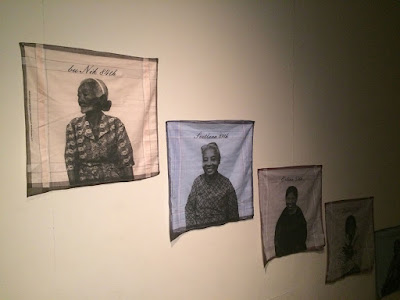 The exhibition had also two interesting works on fabric with very different stories. The handkerchief with portraits on them hang in a staircase leading down to an installation. The portraits are of women who due to their commitment to the Indonesian Communist Party were put in concentration camps in 1965. I think it is a beautiful and strong statement to portray this women on something that can catch sadness.
The second story on fabric was in a temporary set-up between the two exhibitions, 'Ancestors & Rituals' and 'Power and other things' at BOZAR. The work by Alexis Gautier was made around the creation of a new island. This magic island that appeared over night, aka was made by the artist, was a way of seeing how people live, interact and own islands. Part of the exhibition was 'Princess's Weave'. The story goes that in 1505 Queen of the small Buton island in Sulawesi decided to cut her striped dress into small squares, creating a currency for her island! For the five following centuries the bank notes were exclusively woven by the princesses. This amazing story is true and how did I never heard of it before. Apparently 12 pieces of this woven money survived and are being kept in Museum Nasional in Jakarta. It sounds like to most amazing money in the world! 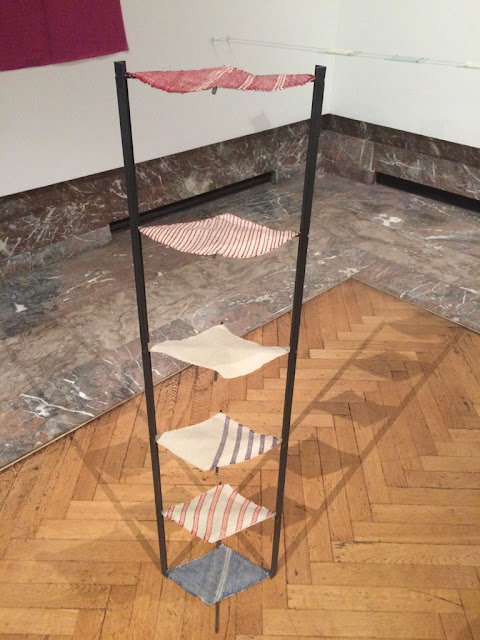 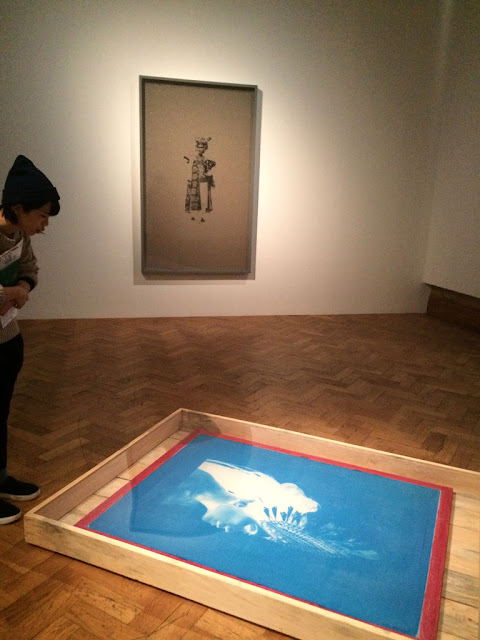 Work by Octora Chan based on Colonial Balinese portraits