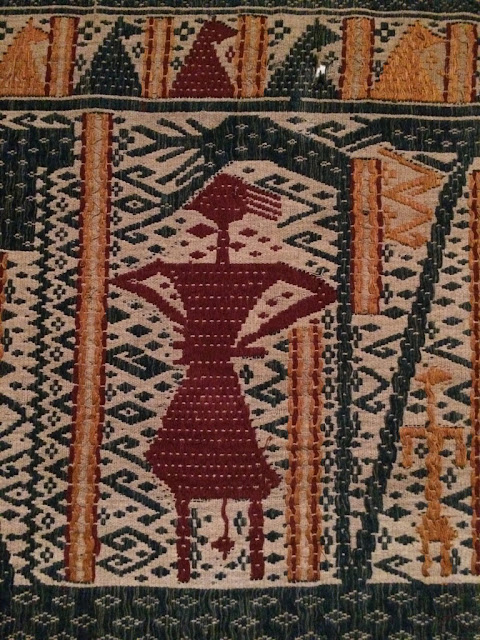 When I saw this detail in a palepai at the Europalia exhibition 'Ancestors & Rituals' I was imagining how it felt; standing on ship, with the wind in your hair, moving forward to the unknown with such confidence. I always love discovering these stories in textiles or on other objects, and this exhibition was full of stories.
I was in October last year in Brussel to participate in a work by Ada van Hoornebeke and Maartje Fliervoet in collaboration with Manoeuvre. The Batik-workshop-installation at WIELS was an interesting growing sculpture on which I will write more in an upcoming post. Before I headed to WIELS, I made my way to BOZAR. Why is ever artspace name in Brussel written with capital letters? Anyway, as synchronicity makes my path, it was no coincidence I could combine my visit. When Art festival Europalia announced that their focus country would be Indonesia, I knew I had to see as much as possible. Unfortunately their music, dance, performance program I missed entirely, their exhibition program I did manage to see, entirely, amazingly! So time for some revisits! 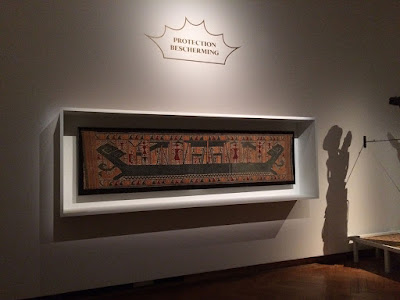 First exhibition I went to was the 'Ancestors & Rituals' at BOZAR. It was just opened, so I didn't know what to expect. The exhibition started with objects from Dong Son Culture. Objects from 500 AD made to honour ancestors and to use in rituals to ask them for guidance.
At the entrance was a well rounded figure of a woman with on her back a child. The statue stood once in Pagaralam (South Sumatra). So much strength came from it. It made me sad she was removed from her location, yet happy the statue survived. Its always a double feeling with these kinds of objects. 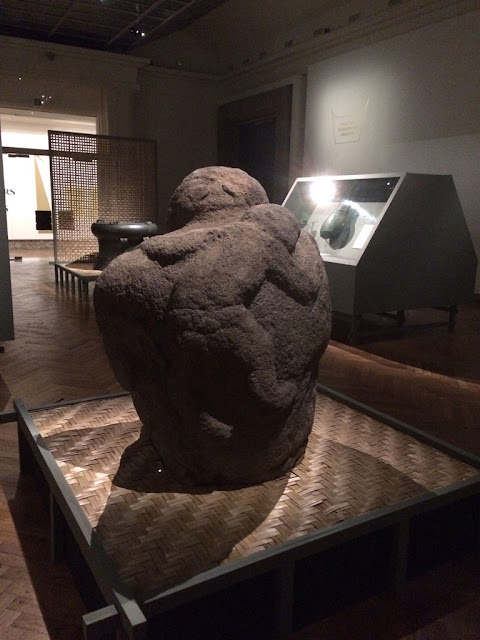 Another object from the same culture, a bronze vessel, was decorated with a familiar looking motif; Parang Rusak. This motif is nowadays the most popular pattern in Batik on Java. Originally Parang Rusak is from Yogyakarta and was a pattern used only by the royal family. The design on the bronze vessel from 200 AD is thought to be the original inspiration for Parang Rusak. 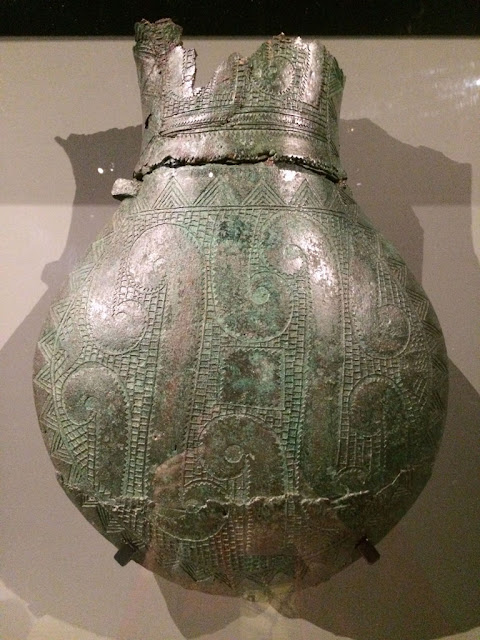 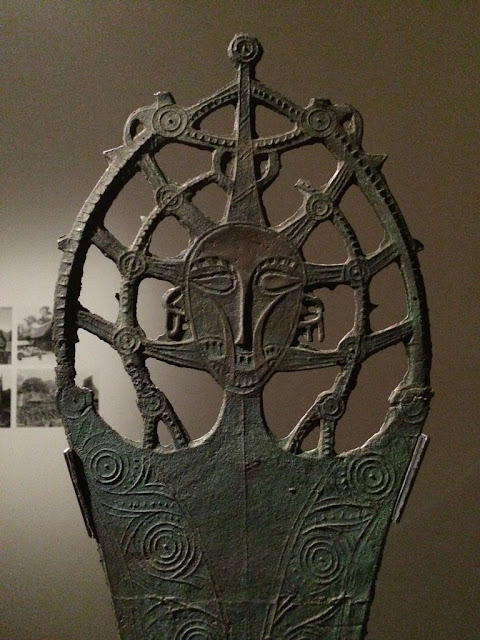 
With this discovery I started looking differently at the objects in the exhibition. There were no actual Batiks on display, but I started finding Batik motifs and other interesting patterns on sculptures, a kris and jewellery. In one room stood three buddha like statues. I recognised some from my visit to Museum Nasional in Jakarta and after I quickly made a little bow before it, I took a closer look to examine the patterns on the fabrics carved out of stone. The statues from the 14th century are from the Majapahit dynasty, a kingdom on Java ruled from 1293 till 1500. They look like gods, Shiva and Parwati, but are actually the kings and queens depicted as gods. The crossed legs are from Prajñaparamita, a goddess for wisdom and perfection. The motif on her knees look like a type of nitik, which is considered nowadays as one of the most difficult types of Batiks to make. Nitik is made using a canting, koper pen, with a square spout. When I first heard about it, I thought it wasn't possible to actually make square dots with a canting, but I saw it with my own eyes. A perfect Batik motif for a perfectionistic goddess. 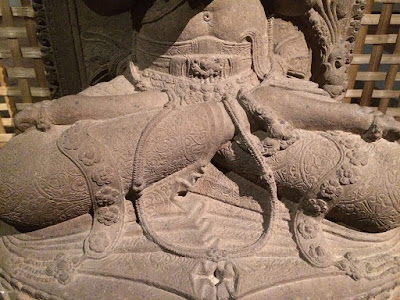 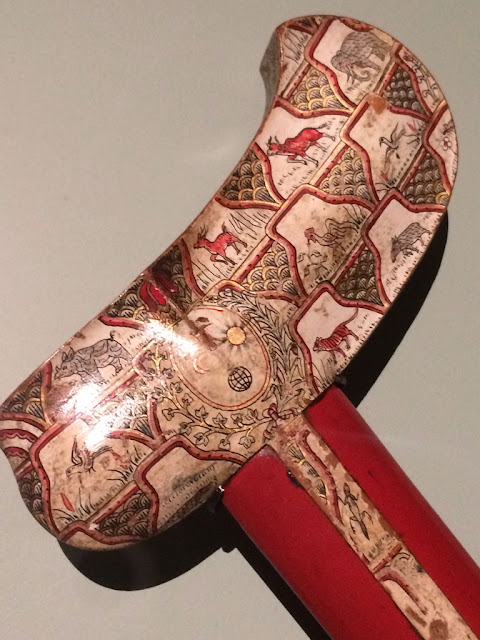 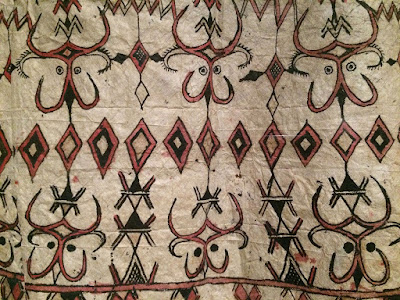 The last object I want to write more about is this fellow on a chair with a nice top-hat. I'm always fascinated by ancestor objects, especially and mainly because they tell so much about the person it is made for. They can be kind hearted, mean looking or just intelligent, bright or very very sad. This one I found so wonderful. Normally these types of statues have a squatting pose. A typical way of sitting without sitting if you are flexible enough. This statue from the Moluccas is made before 1888 for a person who was probably Christian. If the person was European the information didn't say, but the hat and the chair surely suggest he was. I just love that although this person for who the statue is made didn't believe in the ancestor worshipping, they made it anyway, just in case. And added his top hat he probably wore on special occasions and gave him a chair so he didn't need to try to sit in a squatting pose. 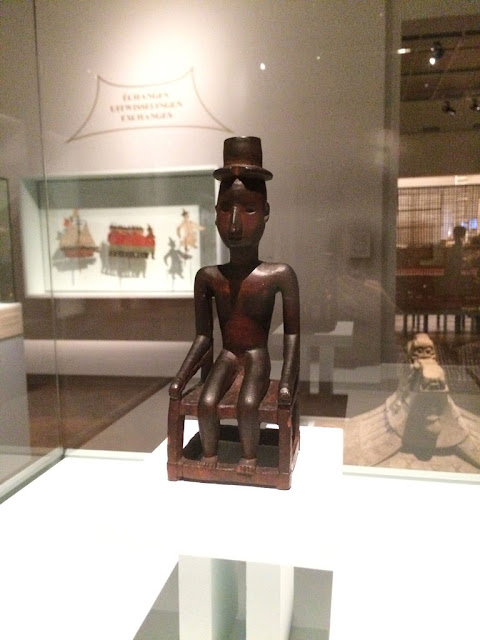 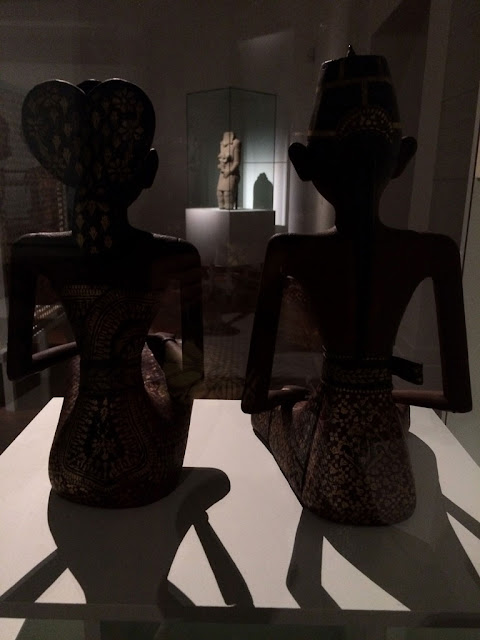 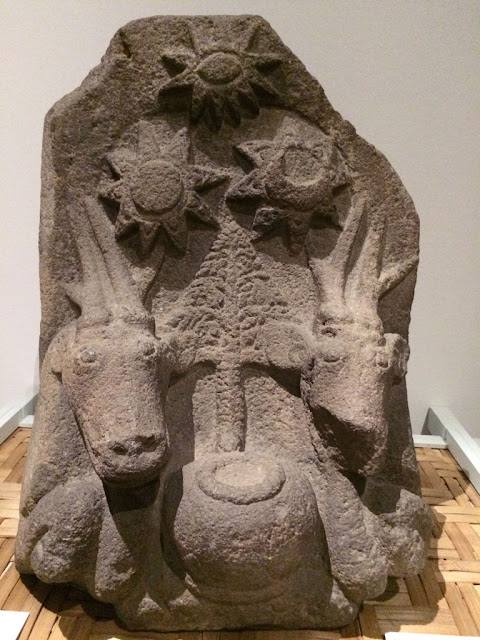 Majapahit-ancestor statue with two deer heads, a tree of life
and apparently the rainbow broke off... 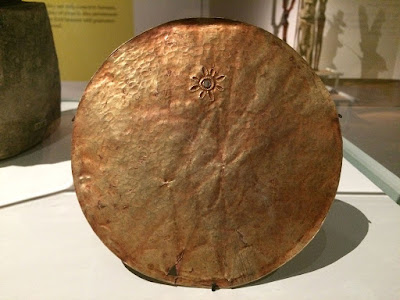 Pectoral disc, Belak
Made from gold, 19th century
From Timor 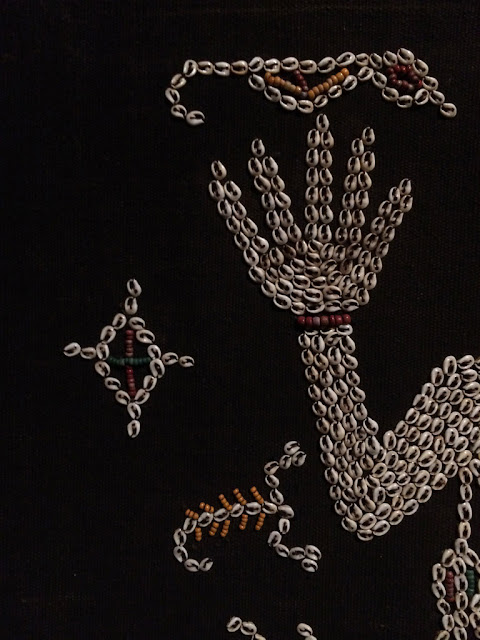 Detail of cloth decorated with beads and shells
From Sumba