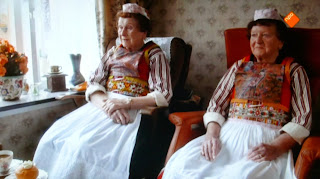 Ladies from Marken watching the coronation of Willem-Alexander 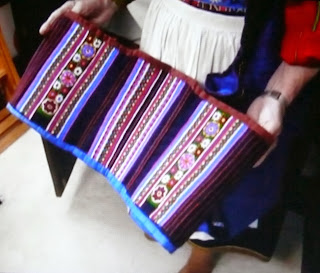 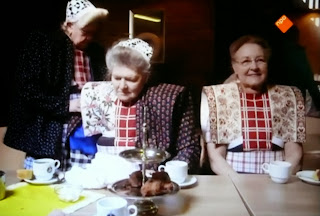 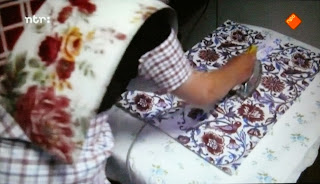 This post is about the wonderful documentary "Levende Klederdracht"(= Living Traditional Costume, English title is "Dutch Darlings") by Niek Koppen.* The docu shows the last wearers of our Dutch traditional costume. These women from Arnemuiden, Staphorst, Urk, Volendam, Bunschoten-Spakenburg, Westkapelle, Scheveningen and Marken are shown in their daily life.** It's like watching tropical birds displaying in the forest including the wildlifephotographers who are documenting the whole thing from only meters away. These women aren't being exotic, they just didn't stop wearing these costumes. Most women stopped wearing traditional costumes during the Second World War. Materials were scarce and I think this type of clothing is especially impracticable during wartime. Not only because of how it was worn, but also because you would have stand out.
Most women were happy to give up this tradition. Most men already stopped wearing it and it was therefor considered a liberating act.
The women in "Dutch Darlings" also stopped wearing it during the W.O. II, but all started again when they got liberated. They didn't feel like themselves in the modern, practical clothing. Some of the women tried it out many times, but husbands and children wouldn't recognize them in jeans and sweaters.
The documentary deals with preconceptions in a beautiful way. Of course religion played an important role in the traditional wear, but nowadays it's tradition and not believing in God that makes them choose to wear it. The ladies watching the coronation of Willem-Alexander *** on the first still, tell that they heard from this computerscreen in a museum that they (their traditional costume) are 200 years old.
In Staphorst the lovely Margje laughs when they conclude that she has many children, she answers that for Staphorst criteria she doesn't have that much. They also ask if she has a television. Of course she doesn't, "but on the internet you can see everything!", she replies. 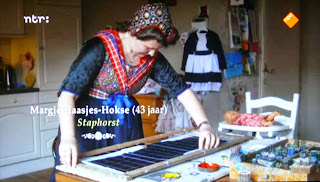 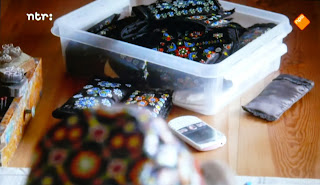 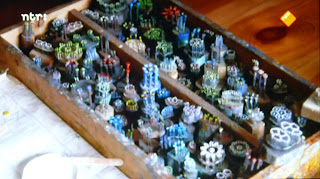 Margje is making a print on fabric during the interview. I found it absolutely wonderful to see the making process, so I tried to share it with you with these stills from the documentary. The quality is not that good, I have to take the pictures while playing, because otherwise a big orange "play" symbol is in the frame.
First some background information about Staphorst and its folk art tradition. I have two books about Dutch folk art in which the focus is on how to do it yourself. In the 70s there was a folk art revival for both indigenous as foreign forms of decorating clothing, furniture and other  objects. In a book from 1965 they say the technique in Staphorst was kept secret between folk artists. In another book they claim the Staphorst dot folk art is pretty new. They first learned mural painting from a German emigrant early 1800. He was an ornamental painter in the 'bauernmalerei' tradition. After the war the abstract dot technique replaced the floral paintings. With approval from the clergy the dots were put on caps and other objects. To make these dot paintings yourself, you can best buy the paint in Staphorst (Bring your own jars). The special paint dries up like a pearl on top of the fabric. ****
They make the dots with a stamp. The stamp is a made very simple by putting nails in a piece of wood or cork. Margje in the docu inherited her stamps from her mother. I'm so happy that these stamps are still used! And I hope her youngest daughter, next to her in one of the stills, takes over this tradition of making Staphorst dot paintings.
Margje is making a fabric for a mutch (a close-fitting linen cap). She cut it in the right shape, so she doesn't print pieces of fabric she is not going to use. The fabric is on a wooden bord and over the fabric is a grid made of wire. I found this very clever, in this way the print is symmetrical and straight. She makes a print of a vase filled with flowers. They ask her what other things she makes. She answers that cellphone covers are her best selling object, and she makes bookmarks. Have to get me one of those cellphone covers! I'm very happy that traditional costumes will find their way in modern living, thanks to Marja's cellphone covers and this great documentary by Niek Koppen! 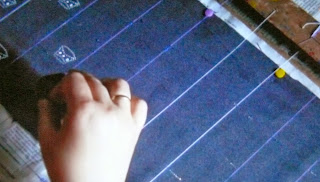 Vase print in the grid 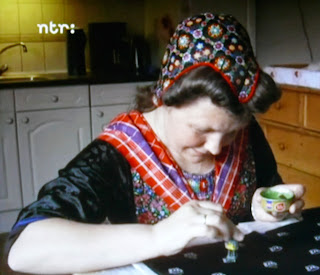 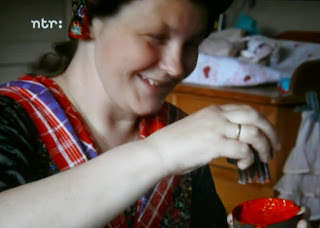 Adding bright red in a tick paste like paint 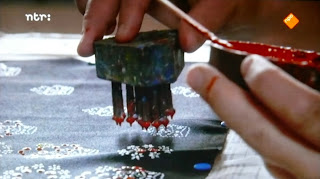 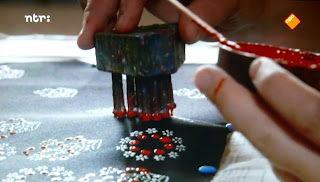 The paint stays on top of the fabric 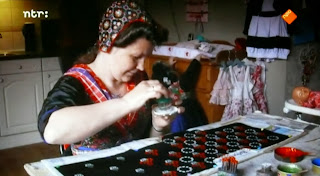 After the floral filled vases a pattern in between is added 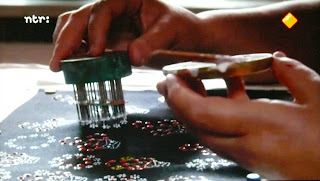 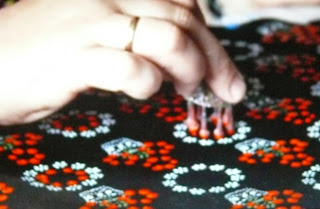 Every pattern is built up with plural stamps 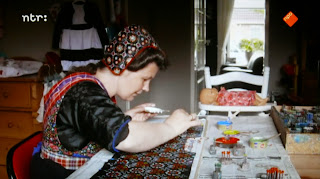 Almost finished, on her head a finished mutch

* More information about "Levende Klederdracht" on www.selfmadefilms.nl
** You can watch the documentary on Uitzending Gemist, http://gemi.st/NPS_1227986
*** See post "The day that you knew was coming is finally here"
**** Information from "Volkskunst der Lage Landen" by Dr. TJ. W. R. de Haan (1965), "Nederlandse Volksschilderkunst" by J. Zuidema (1977) and "Volksschilderkunst" by Michel Spohr (1978)
***** You can buy "Dutch Darlings" in the webshop of Beeld en Geluid