I'm not mixed, I'm influenced by 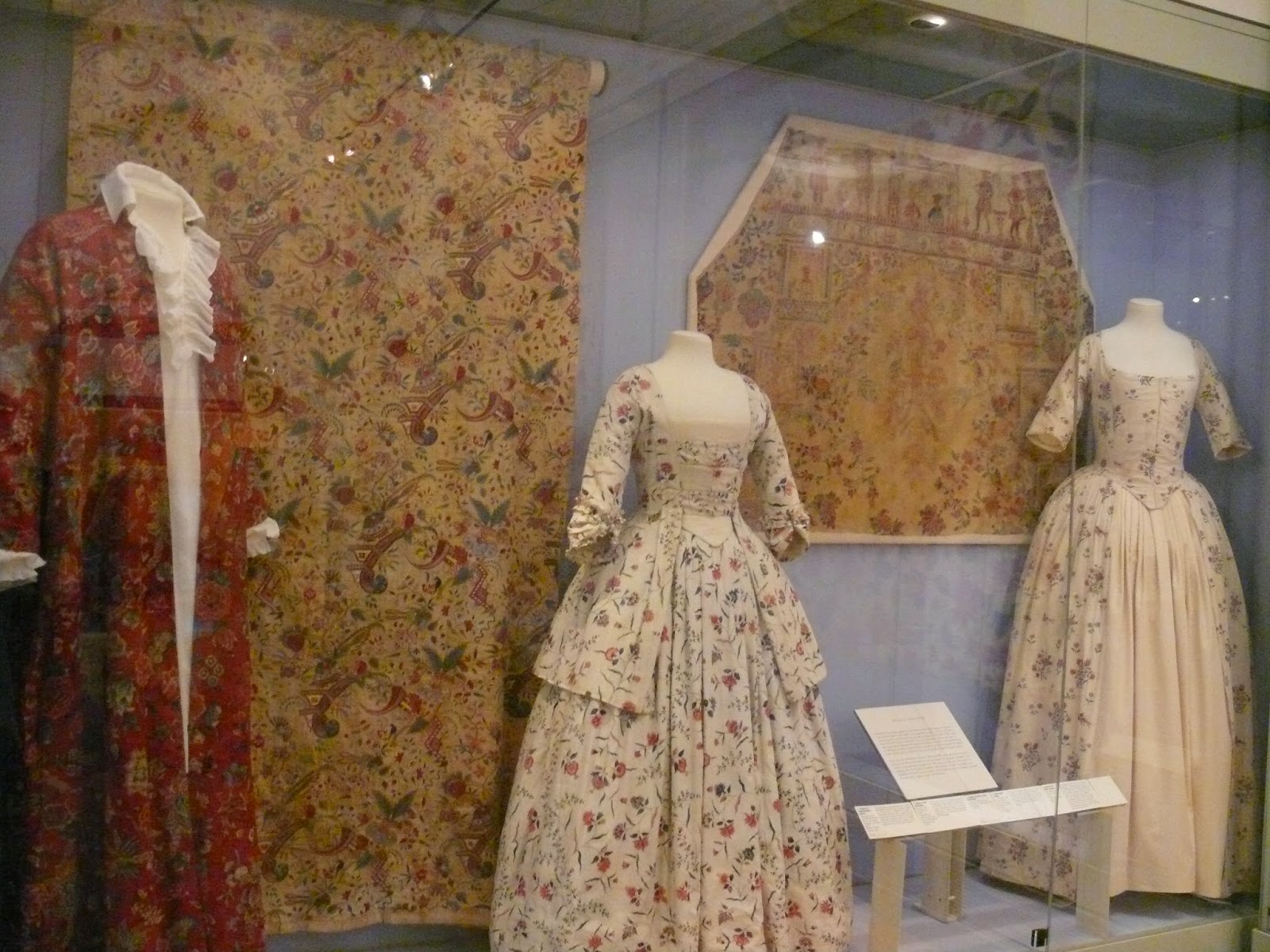 Display at the Victoria and Albert Museum

When Chayet from Nothing But The Wax stayed a weekend here (we visited the African Fashion Week in Amsterdam, AFWA, soon more about that), she re-inspired me. We share a great love for Wax prints, but maybe even more for the search to our roots.
My journey to Batik taught me more about Dutch culture than I could ever imagine. I started learning about different culture and folk art, because I didn't get the same inspiration from European art.
When I returned from Indonesia, I started visiting all the places where I could find Indonesian culture. The more I did, the more I got confronted with mine. In a way I was finding my roots.

My search and love for patterns brought me on a pathway leading me towards Batik, Wax prints and Chintz, circling back to my own heritage. I'm maybe not mixed, but I'm influenced by many cultures.
From my research of the language of patterns I learned that a pattern tells a story. Not only through their meaning, new or traditional, but also through their origin.

Everywhere I go I have this longing to see patterns. In textiles, folk-art, architecture or any kind of local expression. Because where I go, is Europe, I tend to bump into Dutch stuff. Even when I was working my way through the different cultural layers at the Victoria and Albert Museum to find batiks on display, I found chintz, the Dutch ones.* 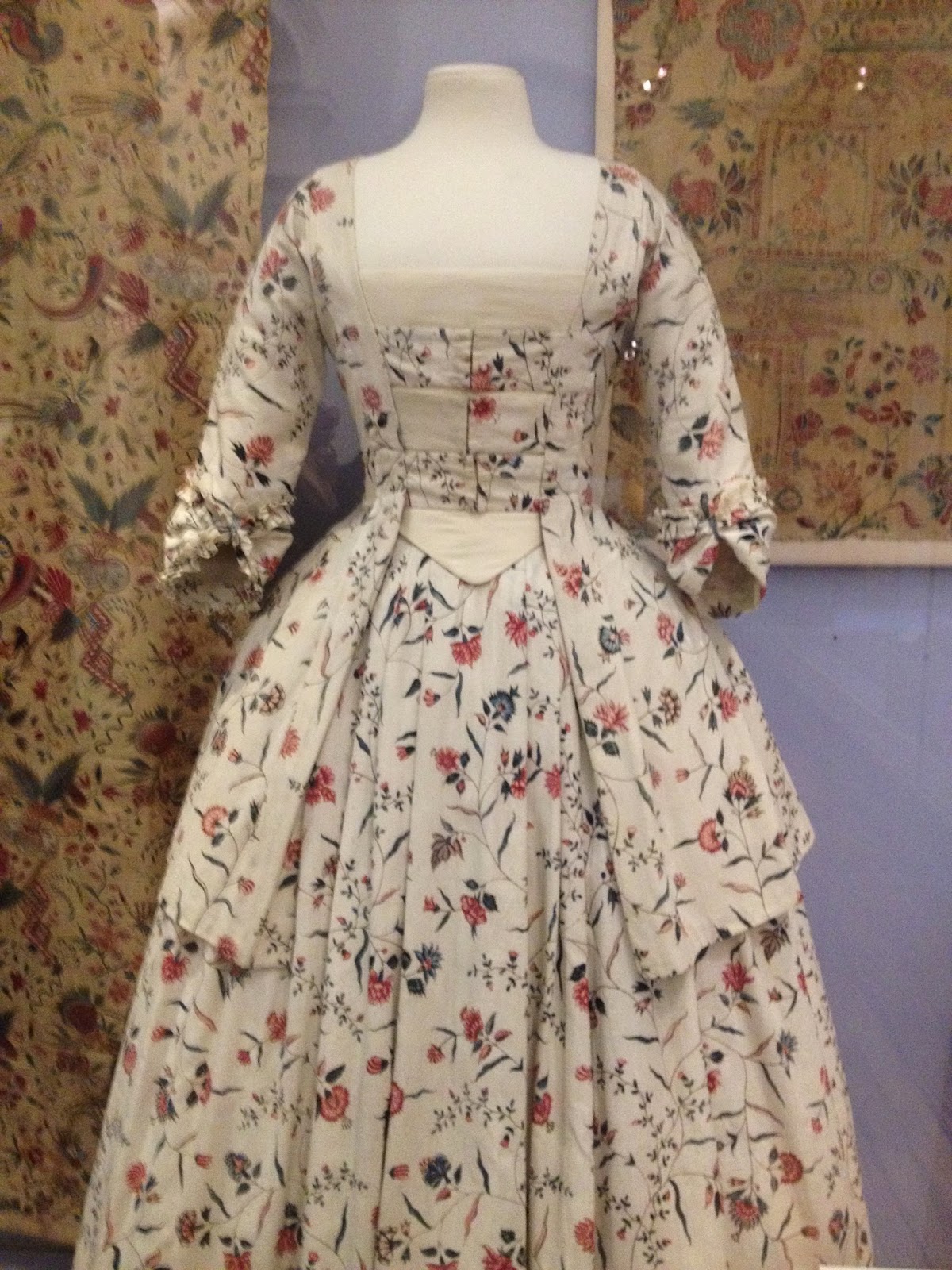 The fashion for costume made from Indian painted cotton began in England, France and Holland in the 1660's. It was especially popular at that time for men's morning garments . By the end of the 17th century , chintz had become fashionable for ladies garments as well, especially in Holland. The accession of William and Mary ** to the British throne in 1690 gave a boost to Dutch fashions in England, and soon all the ladies of fashion were wearing chintz materials that had previously been favoured by their maids.***
This last remark from the V&A display is striking. In the book 'Katoendruk in Nederland' ('Printing cotton in the Netherlands') they ask the question if the printed cottons were worn by ladies from different classes and if so, did they wear different patterns.**** 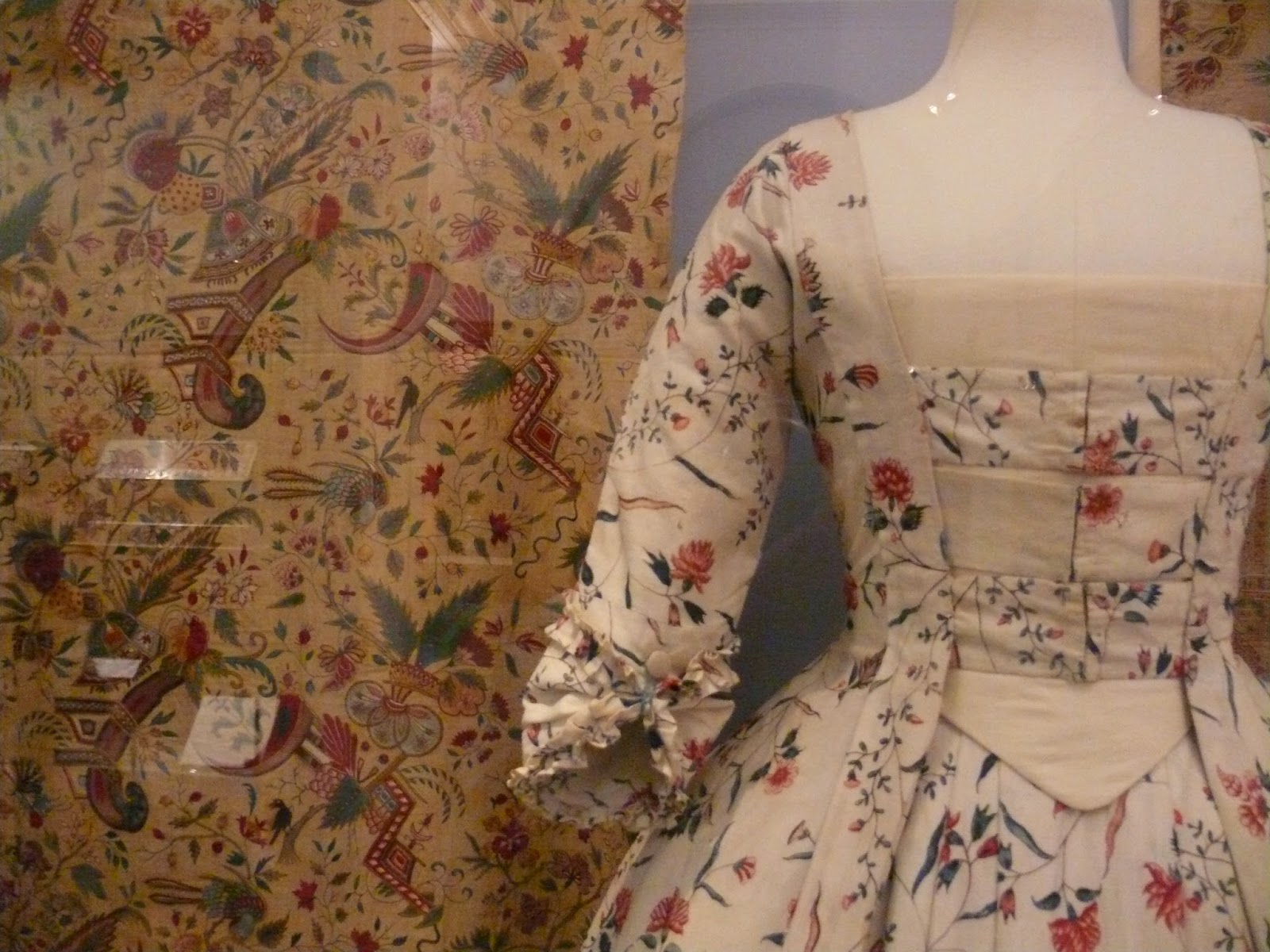 Detail of chintz dress at V&A 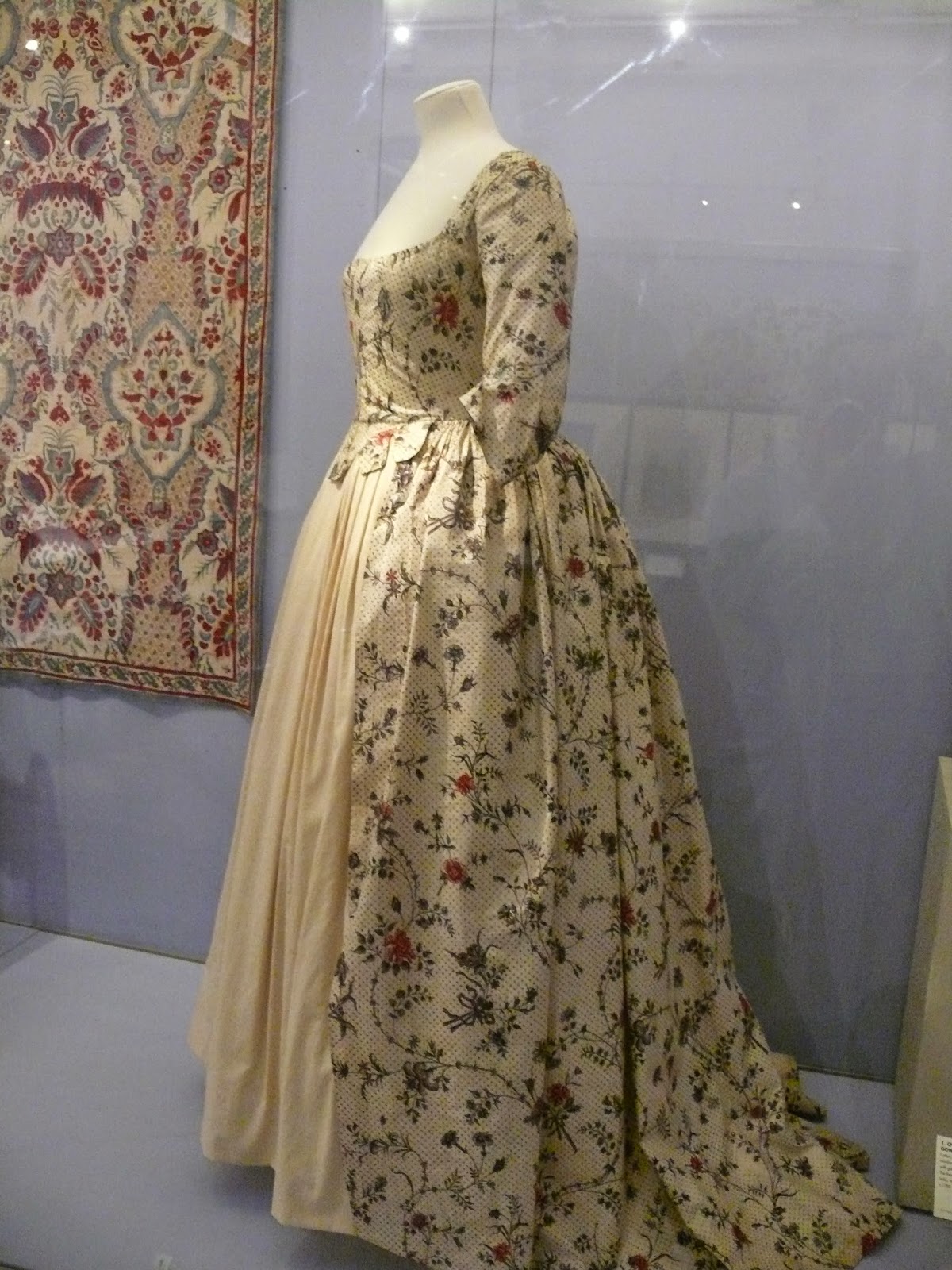 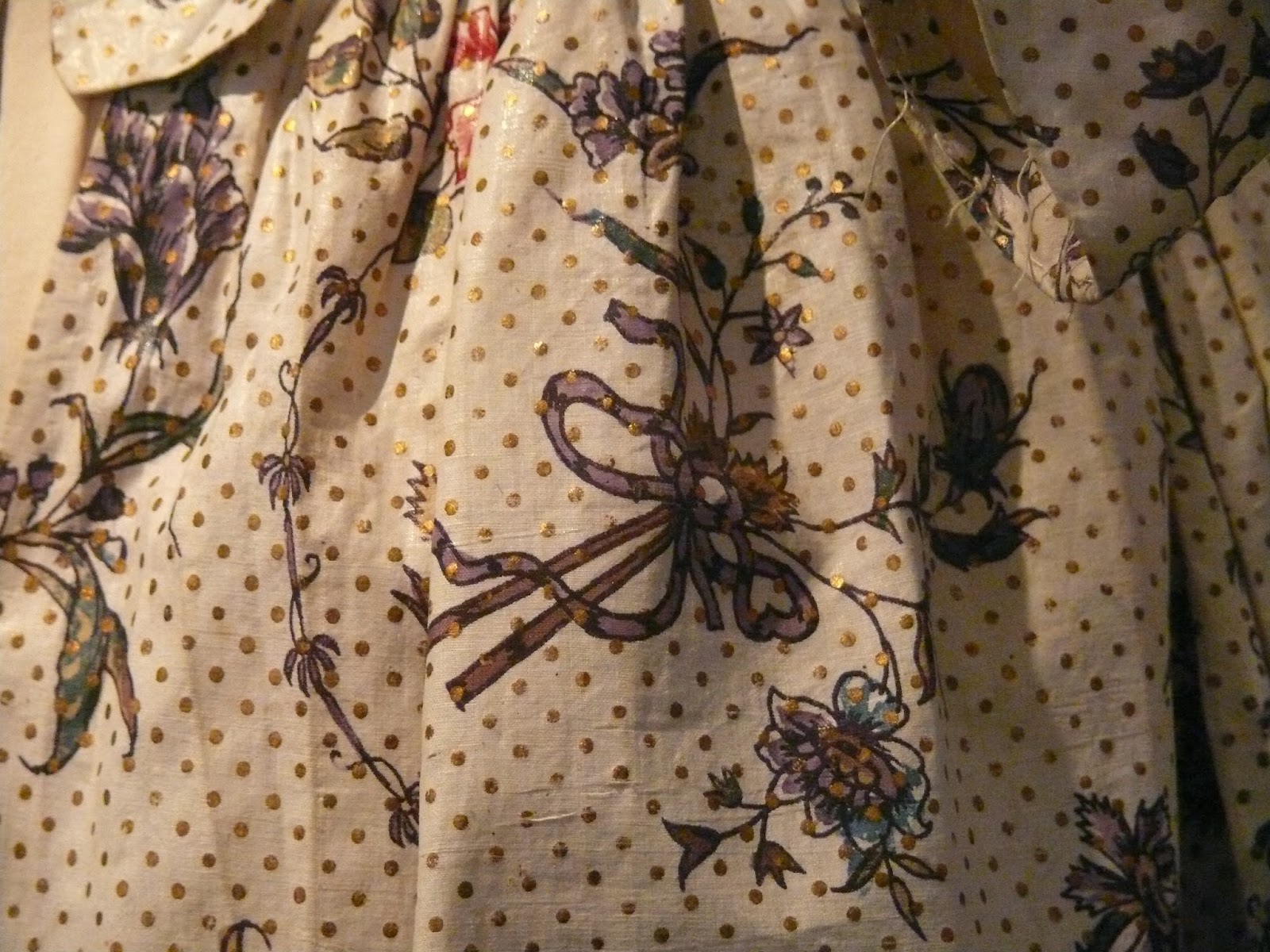 The fabric for the chintz gown is from South-east India, made up in Holland c.1780

This fashionable open gown would have been worn over a petticoat of silk or matching chintz fabric. The tightly fitted bodice contrasts with the gathered, full skirt which may have been augmented with padding over the hips and back of the skirt. The printed gold spot pattern wold have been applied to an adhesive, probably gun arabic, after the chintz fabric had been painted and dyed.*** 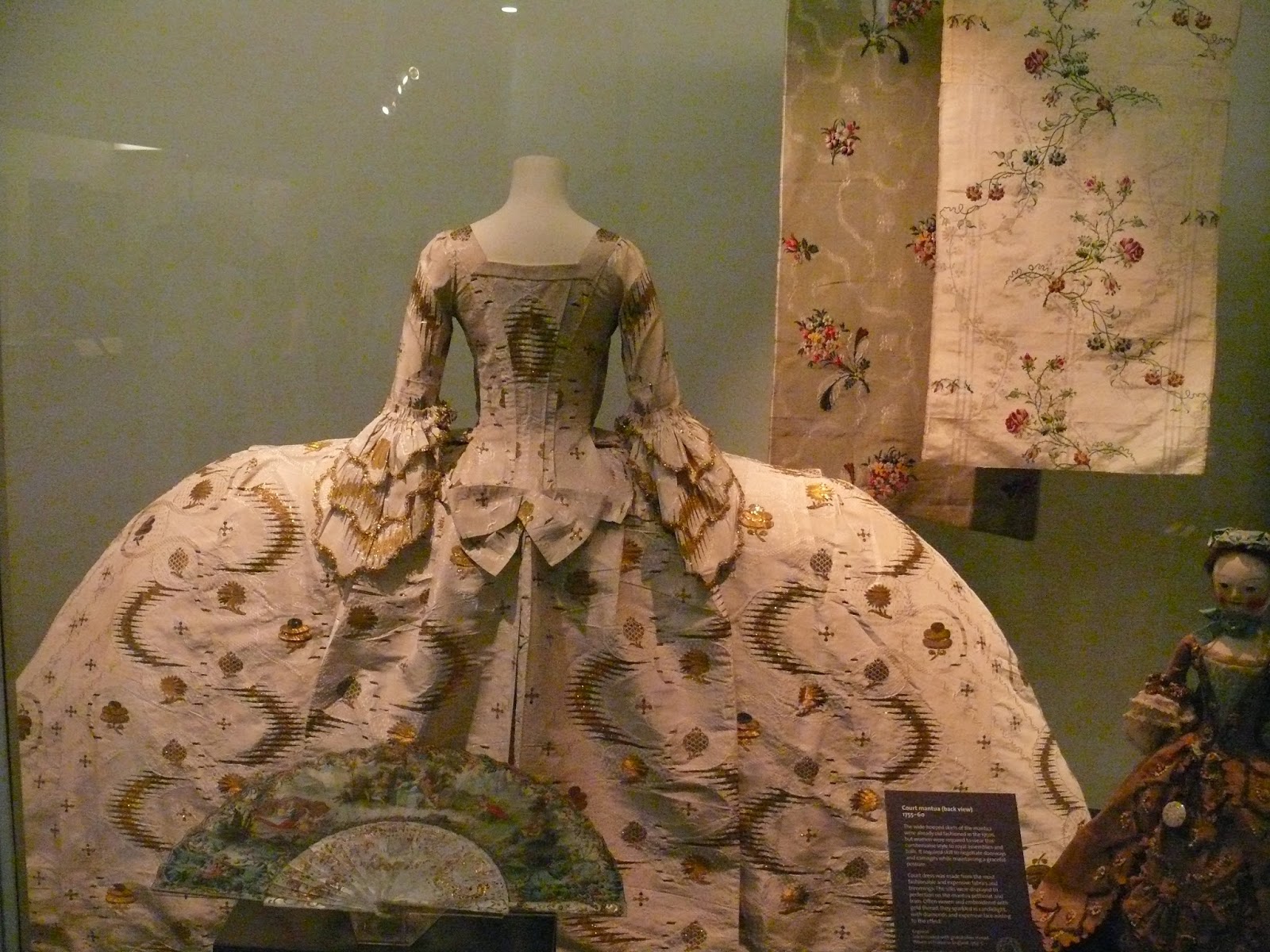 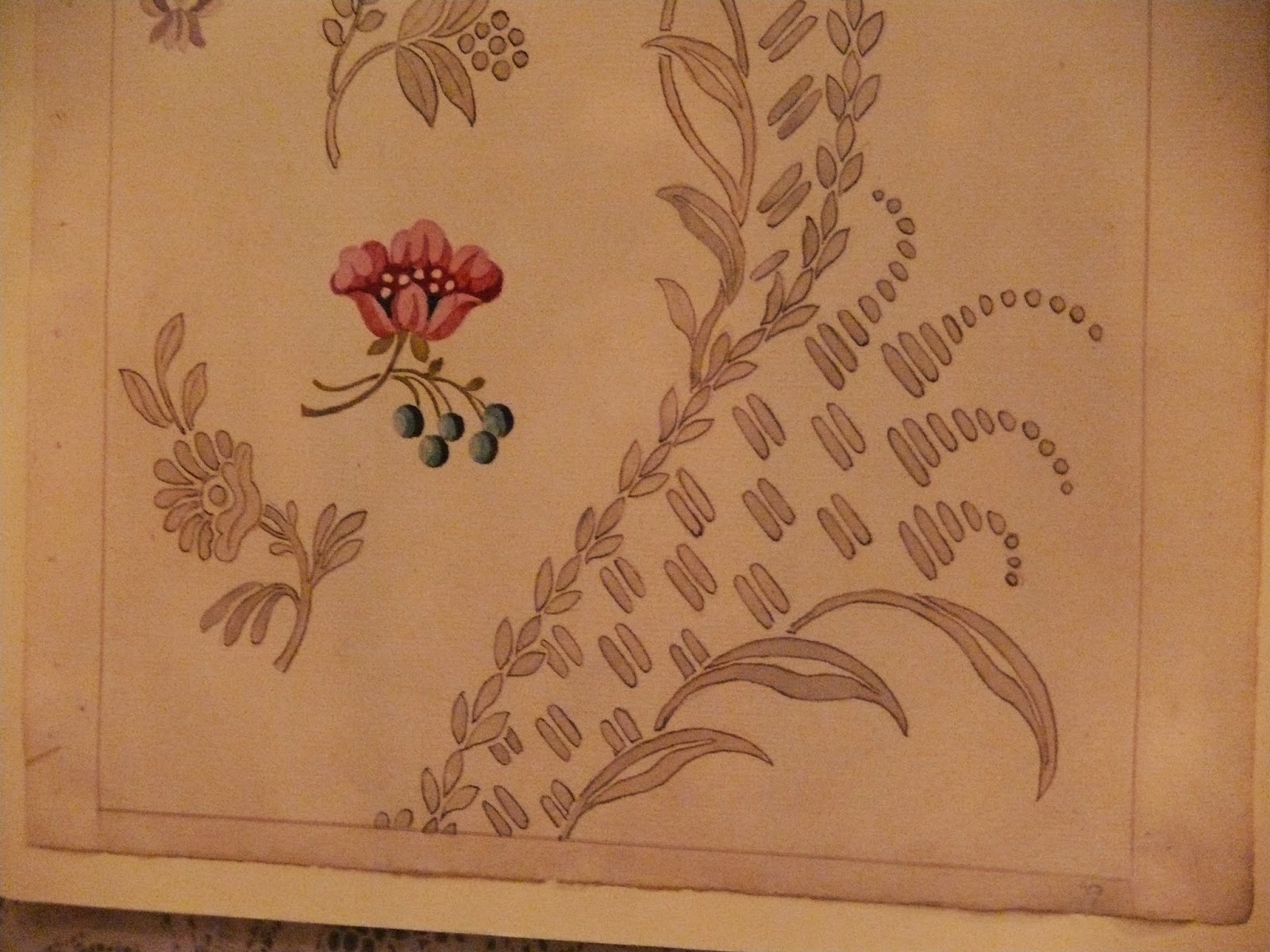 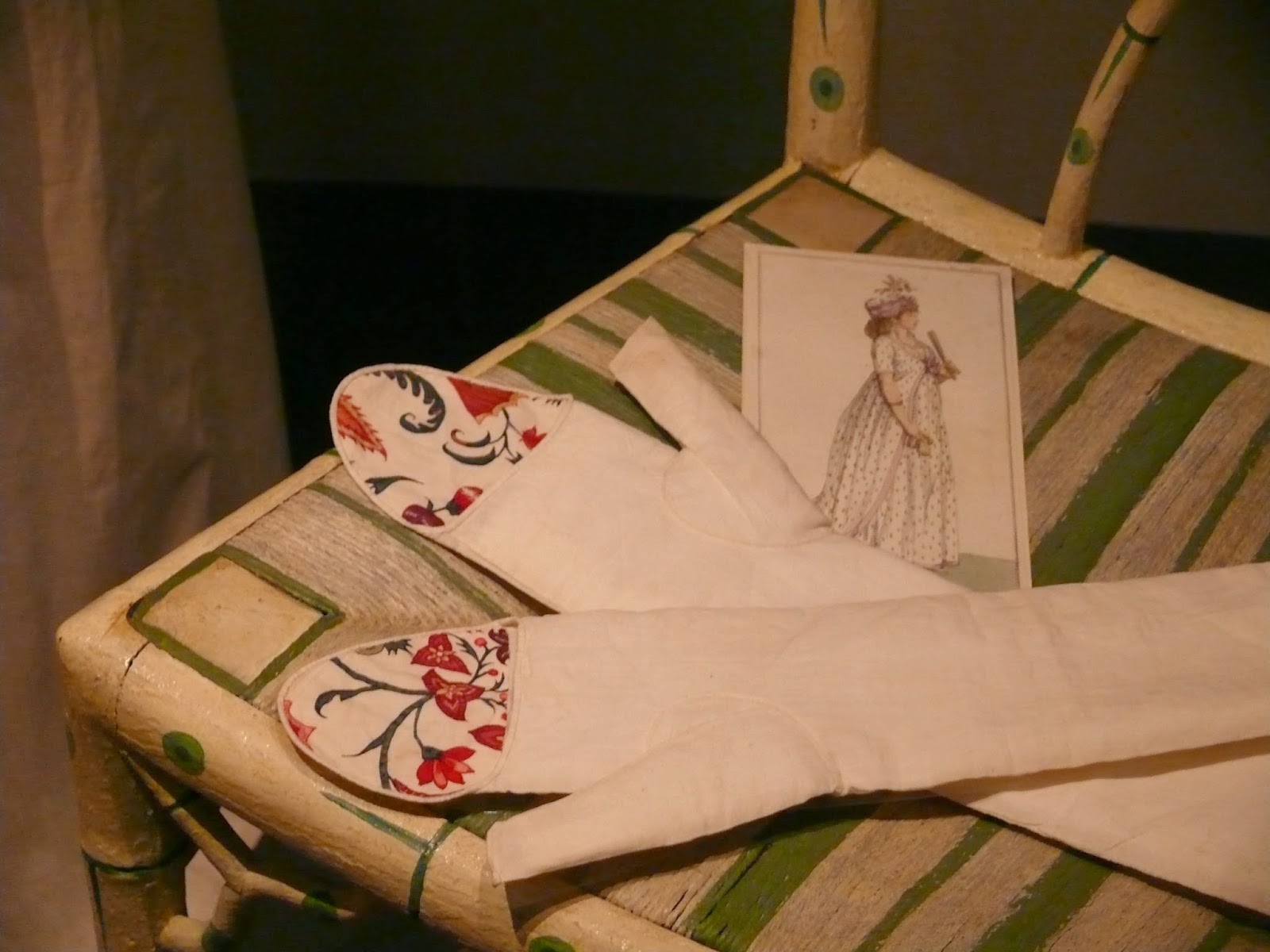 Around 1675 different factories in Europe started to make printed cotton on a 'East-Indian way', in other words an imitation of chintz from India that were washable and colorfast. In Holland, England, France and Germany they experimented with this new process. The number of cotton printing factories developed fast in Amsterdam due to the market position of the Dutch East India Company (VOC). The VOC traded porcelain and chintz from 1602. They started importing huge quantities of plain cottons and were they main supplier of Indigo, the raw material to make blue, from Northwest-India. Madder ("Meekrap"), the base for red, was being grown in the Netherlands itself. The cotton print industry flourished fast, but was already out of fashion around 1800.**** 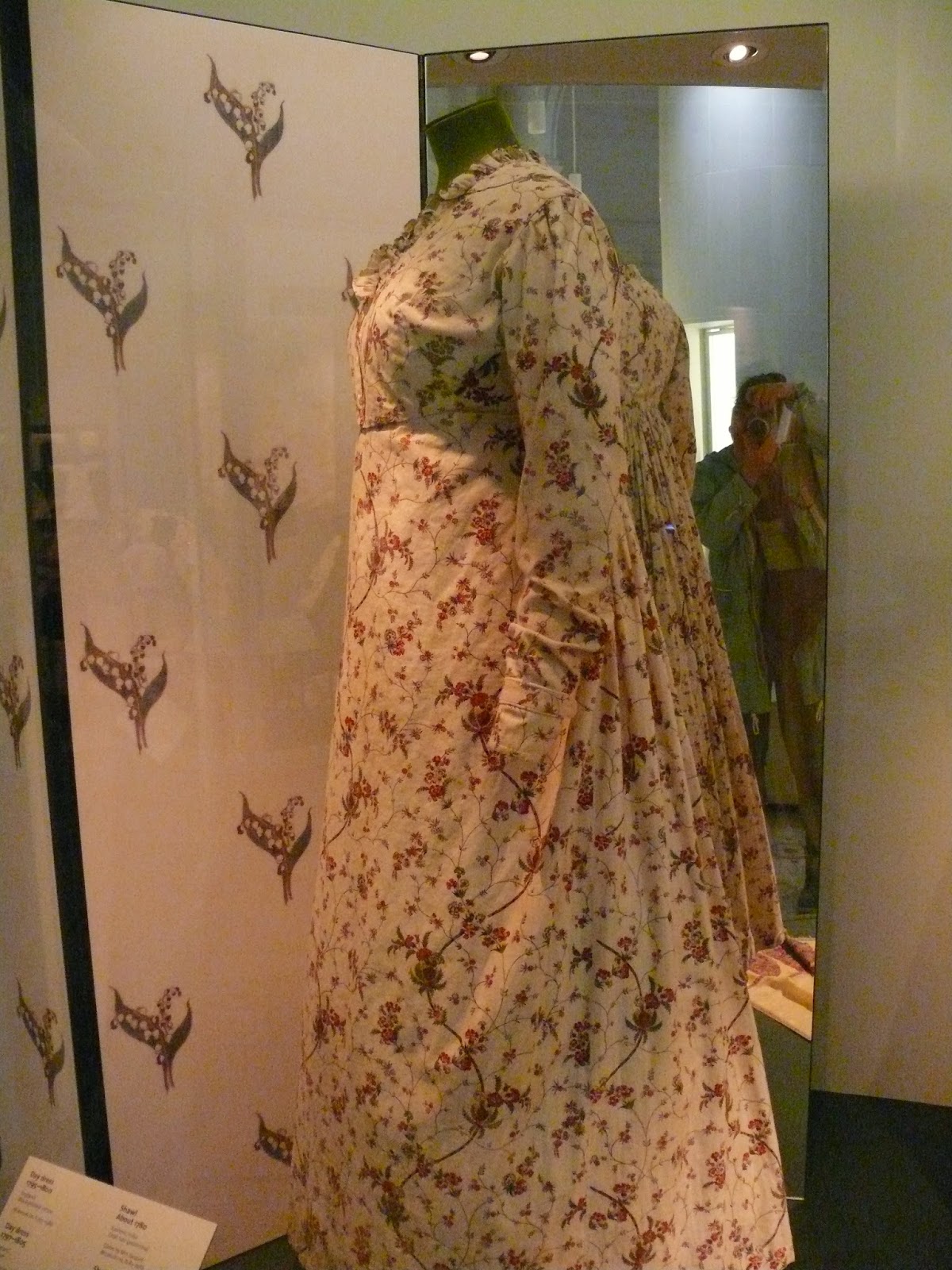 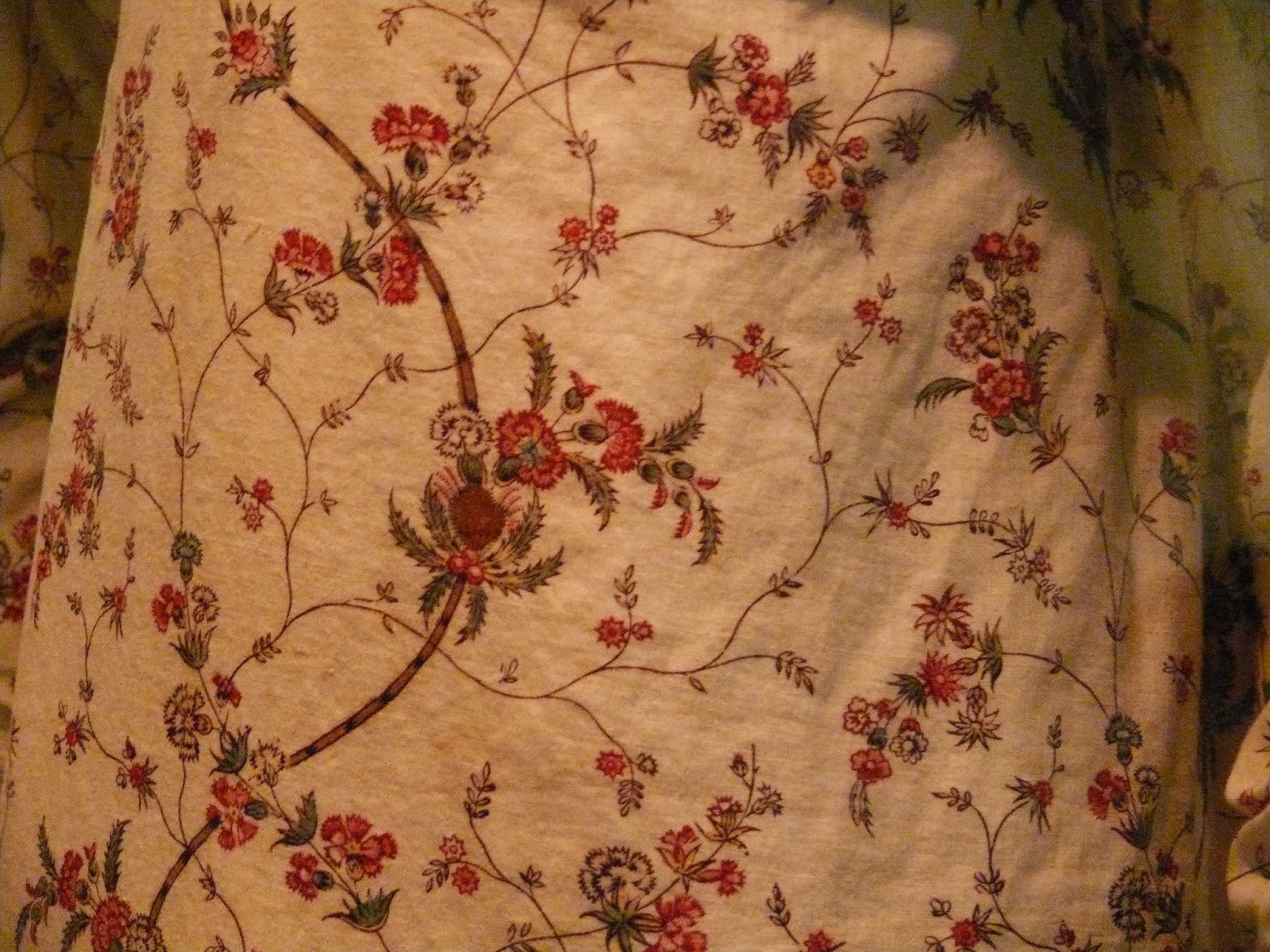 Detail of Day Dress at V&A 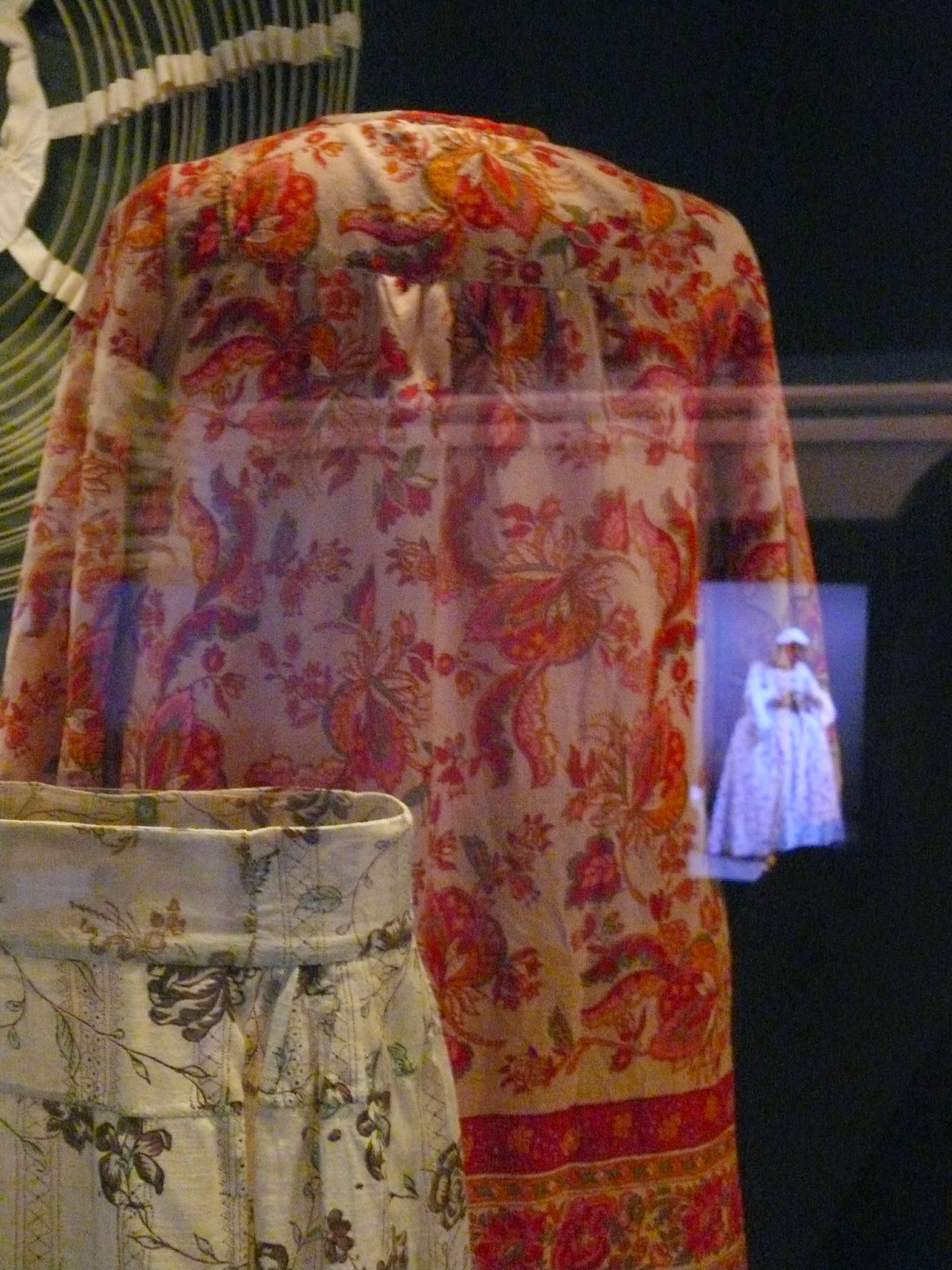 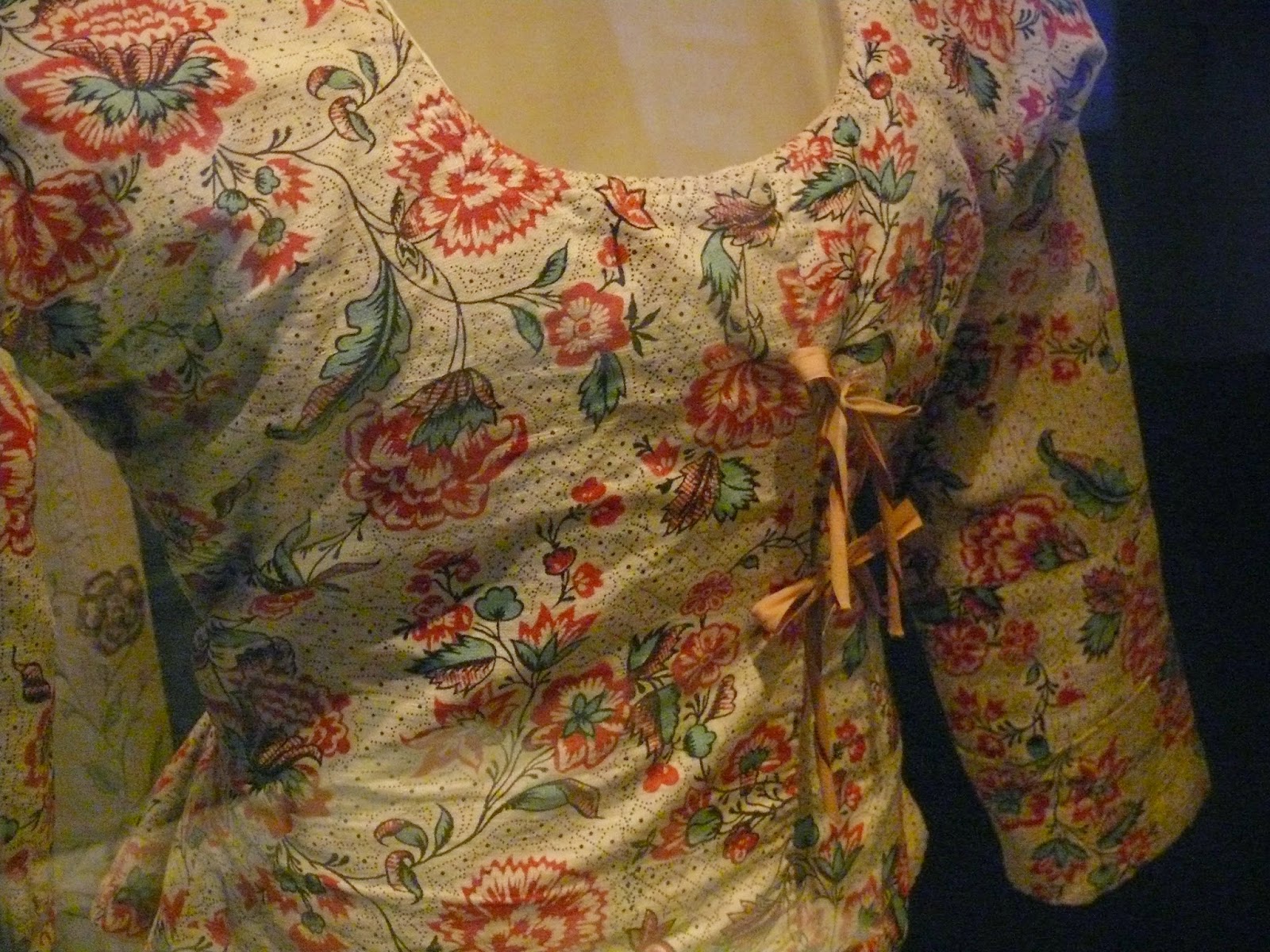 From the historical clothing display at Nordiska museet 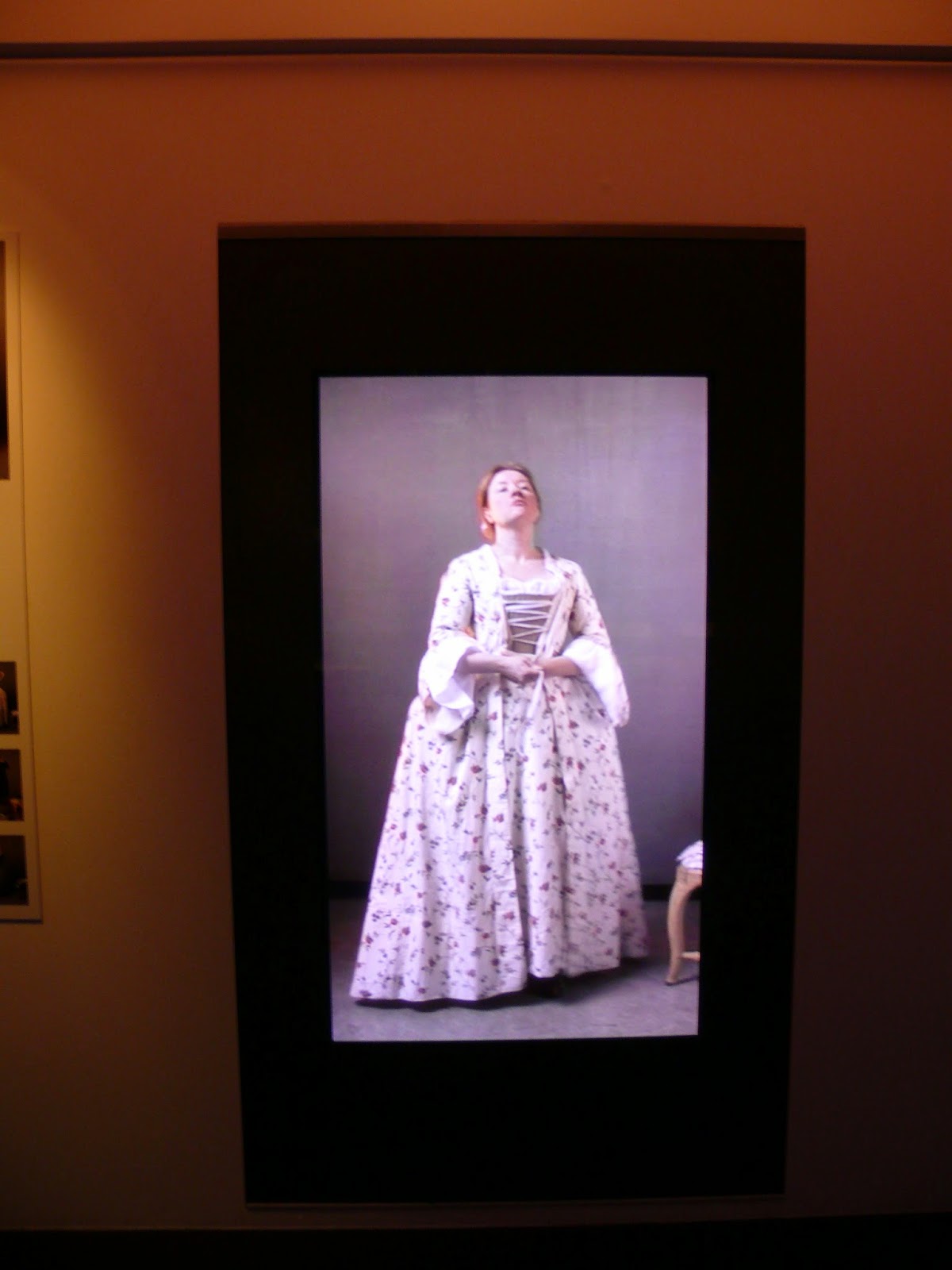 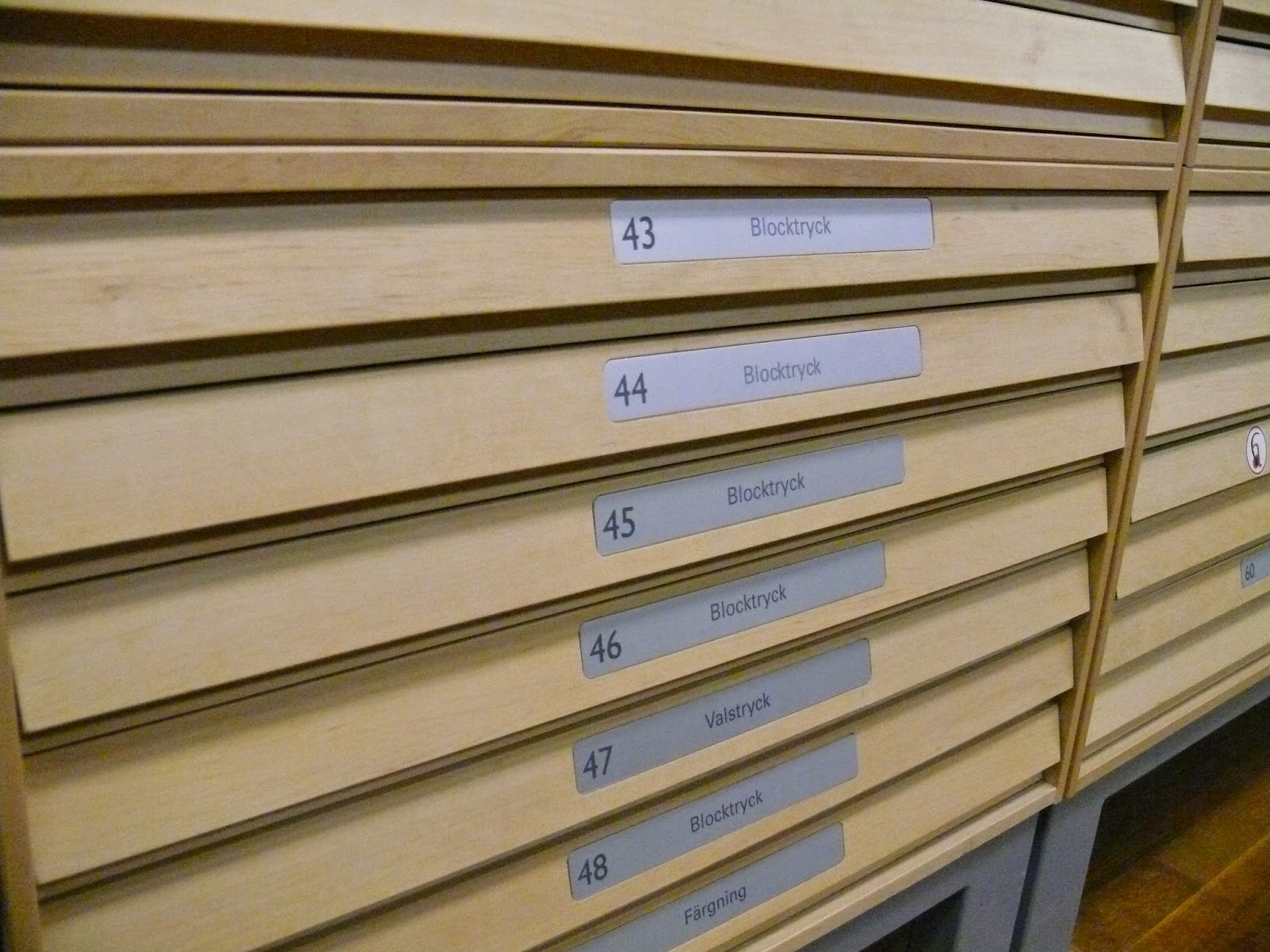 In August I visited the Nordiska museet in Stockholm, Sweden. To my surprise there was a whole room dedicated to textiles.***** In sliding tray cabinets 500 pieces of fabrics are on display. A wonderful way of showing them, and yet keeping them save from daylight. A good example for other museums that now have their textile collection hidden away in depots!
The first trays I opened were filled with embroidered textiles, but on the other side of the room I found all this cabinets with 'Blocktryck' written on the side. 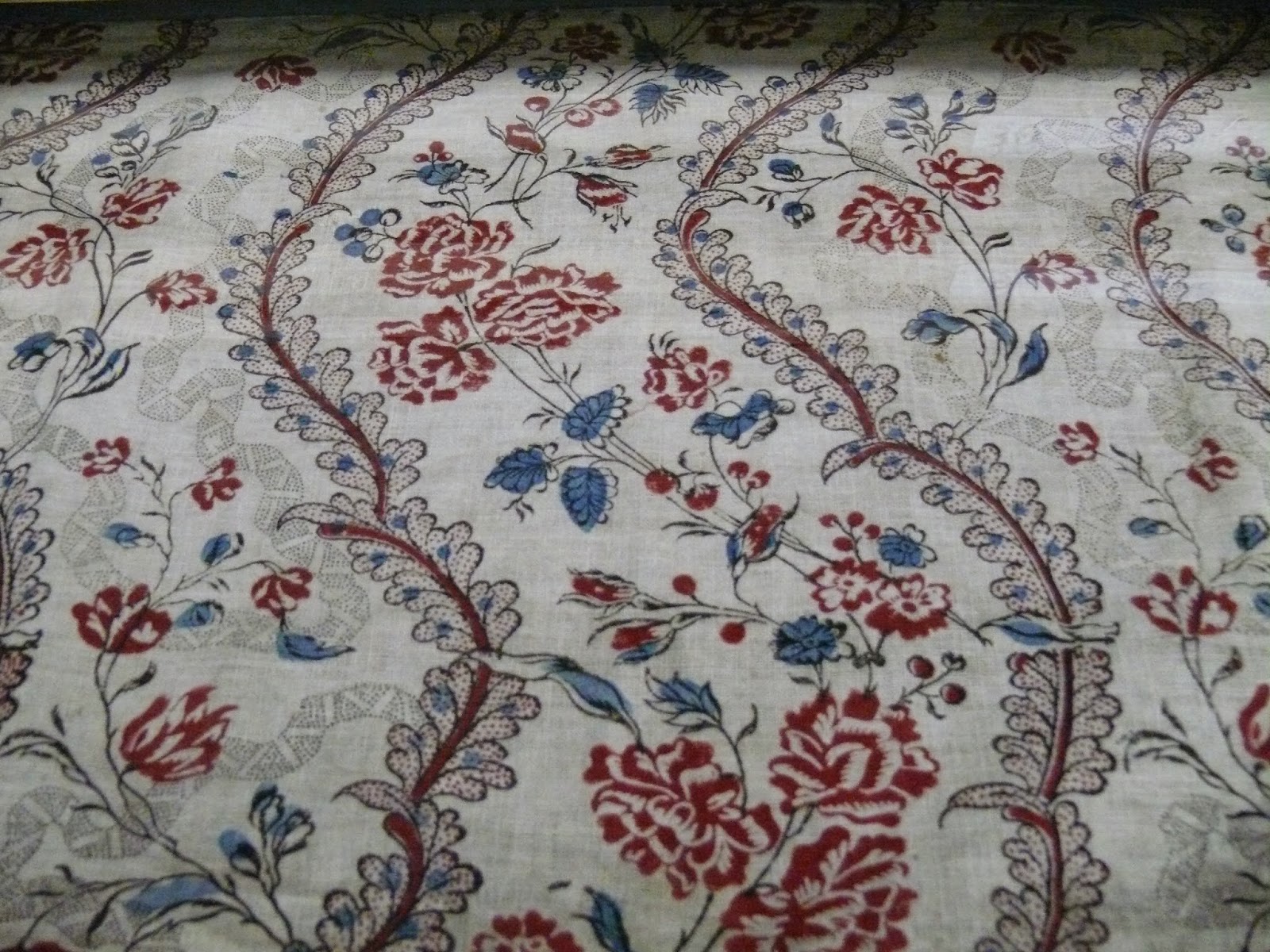 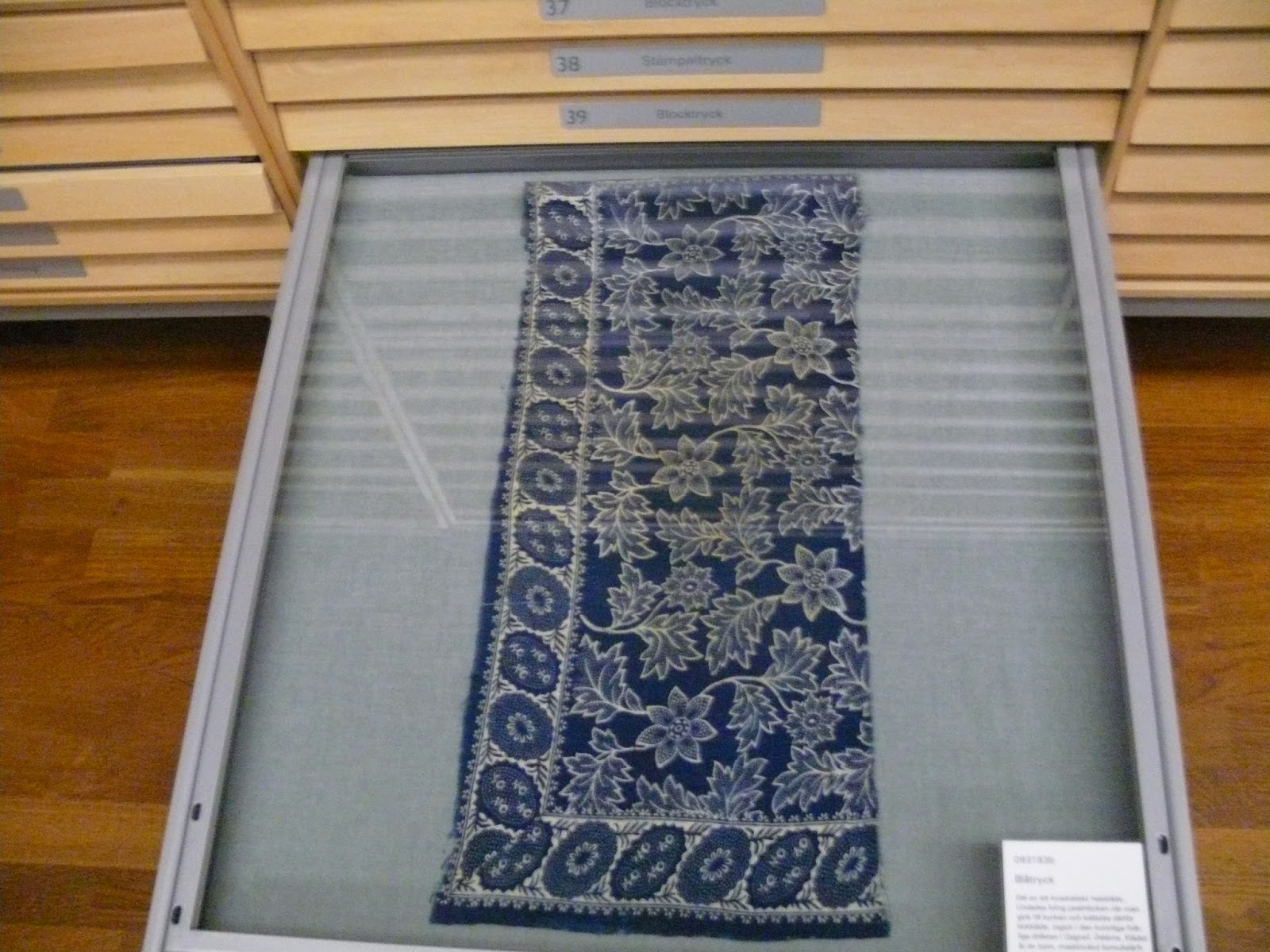 My favorite one was a 'Blåtryck'. It looked so much like Batik, but I couldn't find any information in English. In the giftshop I spotted napkins printed with the same design (I wish I had bought them) and even their exhibition leaflet had the textile on its cover.
The briljant 'Katoendruk in Nederland' book, which I mentioned before in this post, says the following about 'Blådruk', or blue print or Indigo Dye:
"Blue print was already well known in The Netherlands (before Indigo was used and very popular). The pattern was applied with wax on the textile and dyed in a "blue-tub" (blauwkuip"). After the blue-tub the wax was washed out. The pattern would be visible in white on a blue background. Before Indigo was imported, they used woad, which gave a less strong blue colour."

Okay, I will definitely look in to that!