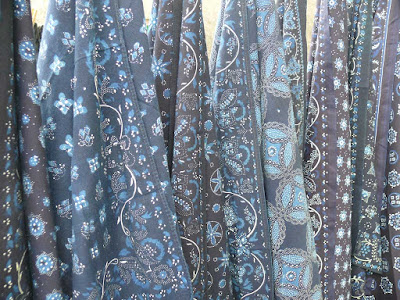 
What is better on Blue Monday then to dive into some blues from the Summer.
Last Summer me & Koen went to a Wedding near Staphorst. On the way back home we visited Staphorst (NL) just to have a look and some eggs. It was a weekday so everything was open, so we made a little walk.
I spotted a sign for the local museum and apparently there was a clothing auction. Well to stick with the blues theme, this happens once in a blue moon. Really.
Only when someone dies in Staphorst it happens that an auction is organized to sell their traditional clothing collection. And it was already two years ago that an auction was held.
Totally unprepared and totally excited I found myself surrounded by clotheslines filled with traditional Staphorst folkwear. Skirts, apron, caps, bags, handkerchiefs & headscarfs with traditional dot stamps and printed patterns. On the last rows where only indigo coloured headscarfs with matching handkerchiefs. Oh nooooo, I wanted one, I wanted all. But I never been to an auction, and I know only a little about Staphorst textiles. So before getting our savings into trouble, we found three ladies in traditional wear kind enough to show us what was what. The Indigo coloured headscarfs were the highlights of the auction and were saved for last. There were some from 1920-1930, some from the 50s. All hand stamped and some newer from 1960 and up, that were printed. They told us the old ones will make at least 120 euro, sometimes more. The one I liked instantly, was old, but not that old, probably from 1950-1960. It was hand-stamped and a very nice example of stippelwerk (dot-work). With mordant ('beits') a white with light blue pattern is made on the cloth. In the outer edge the stamp was maybe dropped onto the cloth, so a part of the pattern is visible in white. The dots created by a stamp made of nails on a piece of cork have such a nice Batik dotted feel to them. I needed this cloth for my collection, so much was clear to me.
The auction started and we were told that we needed to sign up now if we wanted to bid later. I run to the stage and signed up will the first black wollen skirts and Staphorst dot works were being auctioned away.
I was so nervous and didn't dare to bit for anything. A row in front of us was a well known Staphorst dot-artist I know and a row before that a lady with a list who knew exactly what she needed. The ladies in Staphorst bid fearless and I wonder how I ever could make that headscarf mine.
Sticking to my true blue, I kinda squeal when my cloth was going under the hammer. So there went my pokerface and the auctioneer said: "You can offer 50 now and just own the cloth". I was like, no, I want to play, so the bidding begin. A lady in traditional wear behind me wouldn't let the cloth go so easily, but finally kinda let me have it. I was totally in heaven. Only when the matching handkerchief arrived on stage together with another one from a different headscarf, she wouldn't let me have it. 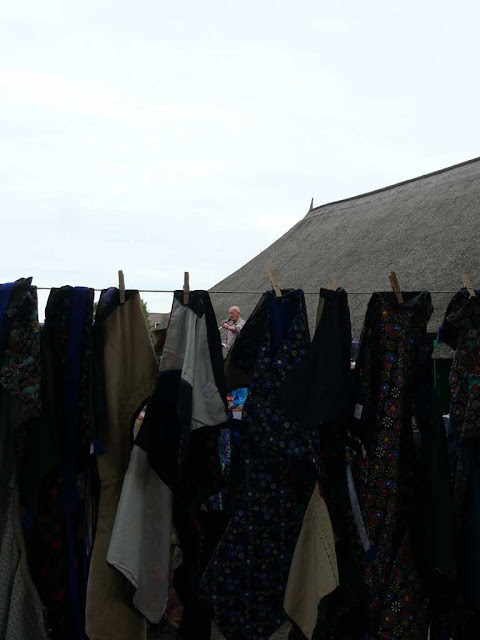 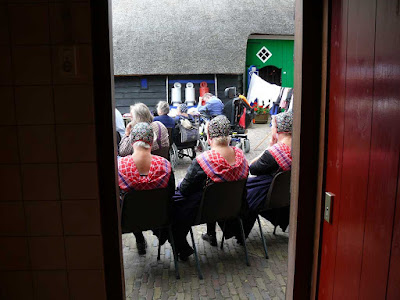 Ready for the auction 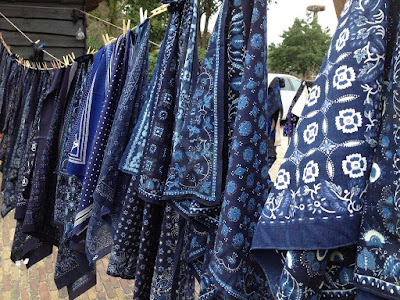 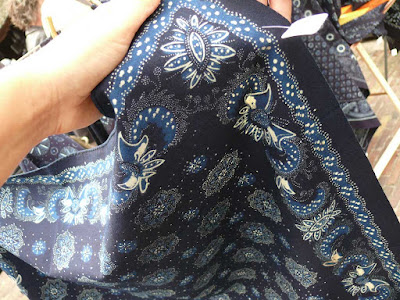 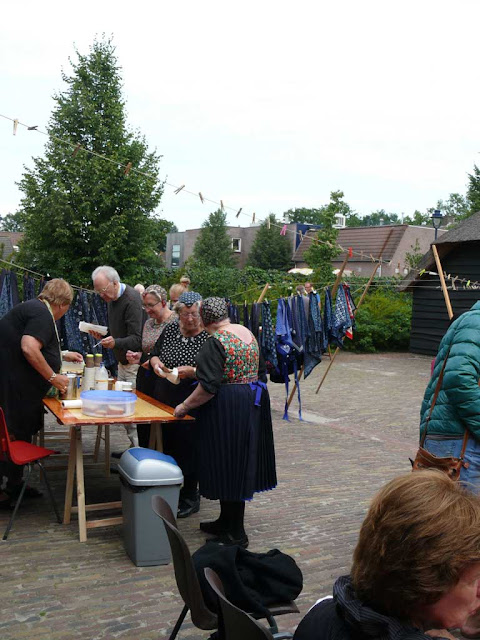 Empty clothing line in front, the indigo cloths in the back 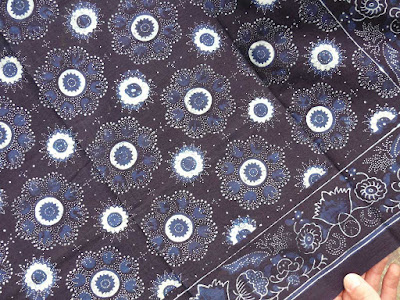 The one I wanted 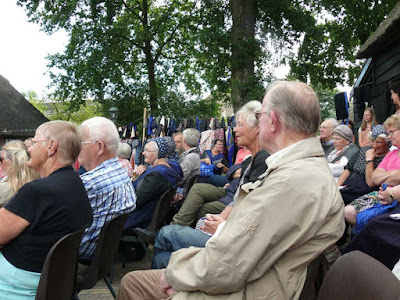 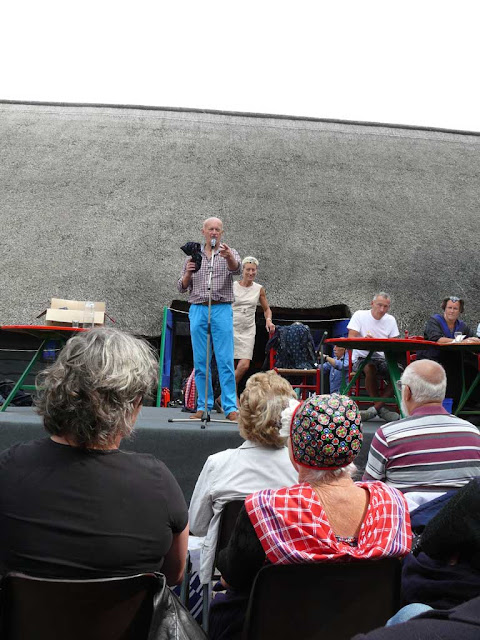 Going once, going twice, sold to this lady 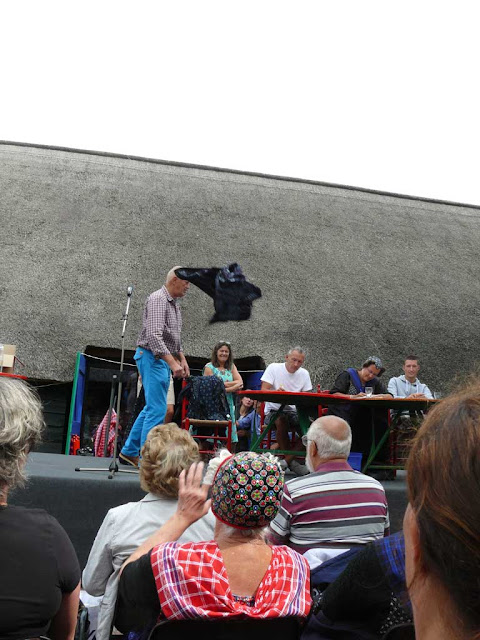 My cloth was thrown to me like this too 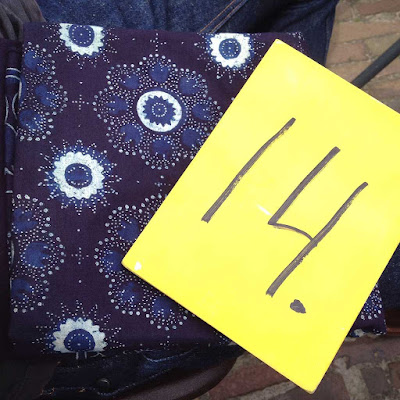 Bidding number and my headscarf!

Till around 1960, you started wearing traditional folkwear from birth. The traditional wear from Staphorst looked for a boy or girl quite similar. For women the folkwear consists of some layers of skirts with on top a black wollen skirt and an apron. The hair was covered with a headscarf or cap, like a bonnet with the Staphorst dot work and over the shoulders a woven red with blue scarf. For men it was a dark coloured woolen trousers and a long sleeved shirt.
Today the folk wear is still worn by about 500 women, but not by any men or children. The colours in the clothing show which day of the week it is, or at least on Sunday the colours are less and less bright.
For mourning blue is worn. They say, how deeper the blue, how deeper the grief. The mourning period was a long one, sometimes for life and sticking to the dress code was partly a reason why traditional wear lost support in the Netherlands. Staphorst is pretty unique for still having so many women wearing folkwear and for practicing their traditional folkart, Staphorst stipwerk (dot-work).