Turn Of A Century 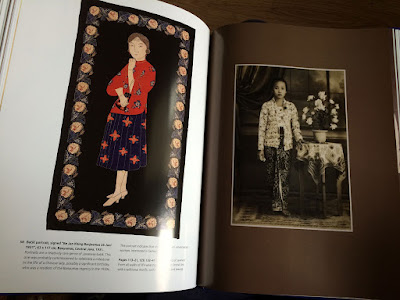 One of my favorite pages of the book 'Batik, Traditional Textiles of Indonesia, from the Rudolf Smend & Donald Harper Collections'. What a Batik Statement! A Batiked Portrait!
Signed 'Be Jan Khing Banjoemas 26 juni 1931'

Don't know what it is with the end of the 19th century and the beginning of the 20th century that makes it so captivating for me. Maybe it is many things, maybe too many things. Maybe it is the fast progress the world was in? Everything was in development, yet the world was still wild and unexplored somehow. Discoveries were made every day. It was the beginning of entrepreneurship as we admire today. Artists practiced many disciplines at once. Ranging from free art to applied art without using Design as terminology.
Walking through Jan Toorop's overview at Gemeentemuseum Den Haag, I was in awe of the body of work, the quality of it and the different techniques he mastered. He was so talented and it's inspiring to see how he could use this talent in so many ways while keeping a true and clear person style.
In another part of the museum were the always lovely 'Edith' by Schiele and the fierce 'Judith' by Klimt. Walking through an exhibition I was going to skip, my head filled with so many great pieces from the beginning of the 20th century, my eye fell on a dark painting of a wilted Sunflower. A work by Wojciech Weiss from 1905.
This turn of the century was a time in which life began to move faster and marked the beginning of the times we live in now. The wheel kept turning and we spinnend out of controle. We now know the costs of this development. The western world on his high horse destructed as much as it created. I now wonder if we can stop the wheels from turning, I envy the artists that lived more then a century ago. The endless possibilities, the dreams of far away exotic lands and the developments of new technology. While Van Gogh was painting his Sunflowers in Arles, the Batik industry overseas flourished.
In Januari I visited Galerie Smend in Köln (Germany). I saw some pictures online, but that hadn't prepared me for seeing so many high quality Batiks from around 1900s. It was a selection of the Batiks featured in the new book 'Batik, Traditional Textiles of Indonesia from the Rudolf Smend & Donald Harper Collections'. I believe there were about 15 Batiks on display. How lucky these ladies must have been, rocking these sarongs while drinken tea in their backyards. And what a pity it is that today Batik Tulis isn't worn like that because it is considered such a luxurious good. It was a luxurious good then, so you can imagine how high that horse was.
The Batiks in the book are of a wide range of marker and customer. Chines, Arabic and Indo-European workshops are mentioned and the question rises; where there also many Indonesian workshop that altered their designs for a different market?
The Batiks in the book with no workshop specification are more traditional Javanese. So concluded could be that every workshop worked for their specific target group. However these target groups are of such a wide variety that it is sometimes hard to tell for who it was or by whom it was made. 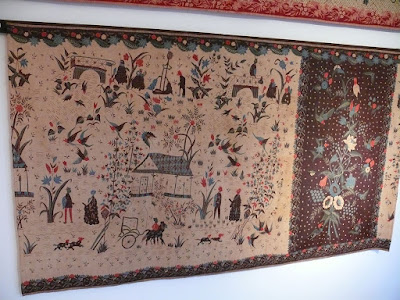 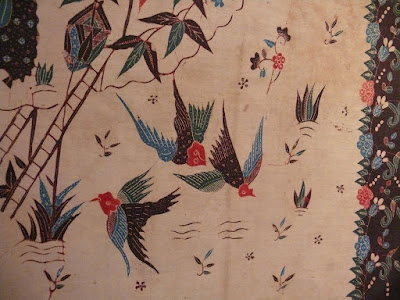 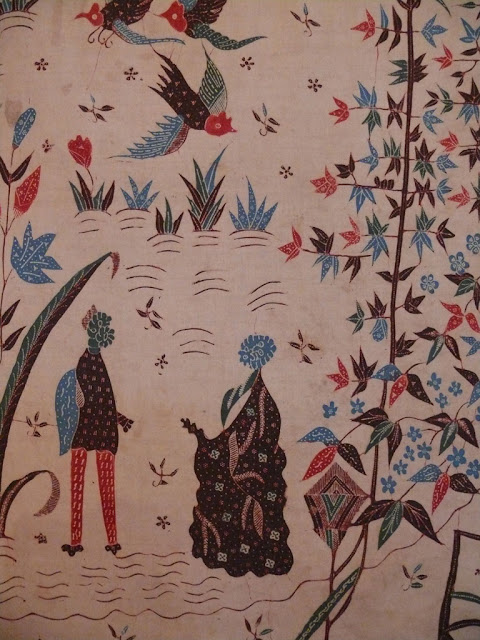 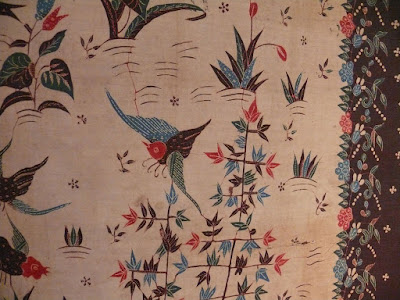 Details from Sarong, probably made in an Arabic workshop in Pekalongan, early 20th century
At Galerie Smend

There are two Batiks in the book that are "probably made in an Arabic workshop". The unsigned kains show a city view with mosques & cars and a rural view with bridges around a house. The colour use doesn't differ much from Batik Belanda style that was populair in Pekalongan. The big difference are the faces. All people and even some of the animals have abstract flower like faces. This is called 'Aniconism'. 'Aniconism' is the absence of material representations of the natural and supernatural world in various cultures, particularly in the monotheistic Abrahamic religions. It may extend from only God and deities to saint characters, all living beings, and everything that exists.
This is practiced in many different religions, but best known in Sunnism (Sunni Islam). And 90 procent of the Indonesian population practices that religion.
In the text in the book is also mentioned that there were 130 batik workshops run by members of the Arab Peranakan in the late 1920s and that in Pekalongan many batik workshops were run by Indonesian Arabs. A little wikipedia to help us out: "Arab Indonesians are citizens of Indonesia of Arab, mainly Hadrami, descent as well as would include those of Arab descent from other Middle Eastern Arabic speaking nations. Restricted under Dutch East Indies' law until 1919, the community elites later gained economic power through real estate investment and trading. Currently found mainly in Java especially West Java, they are almost all Muslims.'"
Apparently this group consist of Indonesians with roots in the Middle Easts, roots in both China and the Middle East and new comers from the Middle East. This whole community was forbidden till 1919 to join certain schools, were restricted from traveling and had to settle in special Arab Kampoengs.
I'm familiar with what I though were Batik for and by Arabic people with checkered motifs in blueish black filled with arabic inscriptions and symbol. But thats only one type of Batik profiled for a group that varies in descent just as much it varies with personal taste. The Batiks in the book are of such a different style that it makes you wonder if Peranakan Arab ordered a Batik in Pekalongan in which she wanted two worlds combined, but the makers had to be creative with the faces. Or was it a Indo-European who ordered a Batik in her taste at a Arab workshop and the markers had to make something they normally wouldn't make. Interesting stuff that can make you dream and wonder all afternoon long. 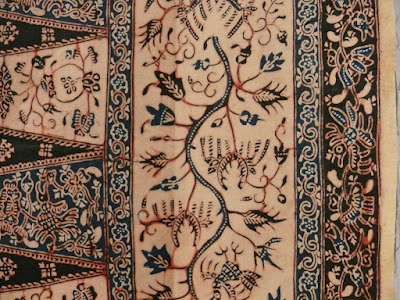 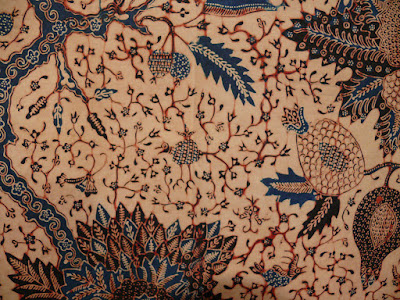 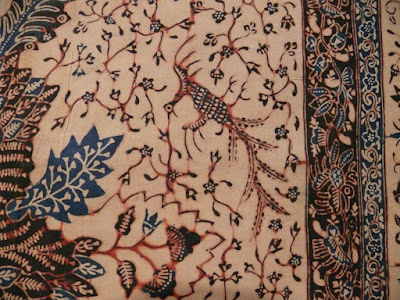 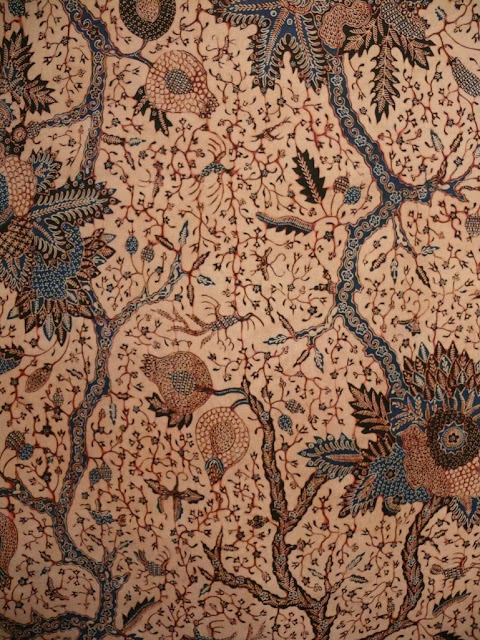 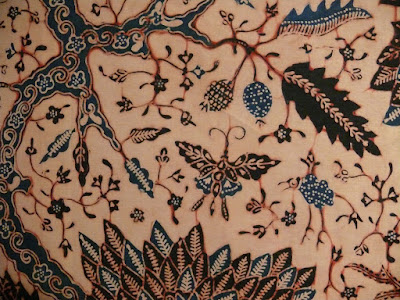 Sarong, made in an Indo-European workshop, Pesisir area, 1870-1880
The cloth is decorated with the tree of life, commonly found in chintz textiles from India's Coromandel coast and were populair with Indo-European women in the East Indies.
At Galerie Smend 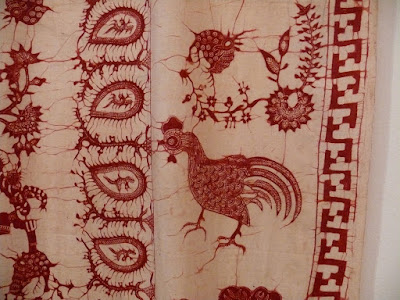 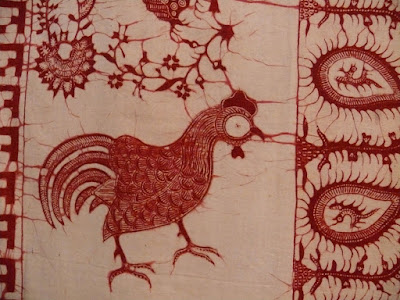 Details of Ceremonial hanging made in a Chinese workshop, 19th-20th century. Look at those beautiful roosters!  This hanging was probably used to hang above the nuptial bed in a Peranakan home. The cloth indicates a wish for many sons.
At Galerie Smend 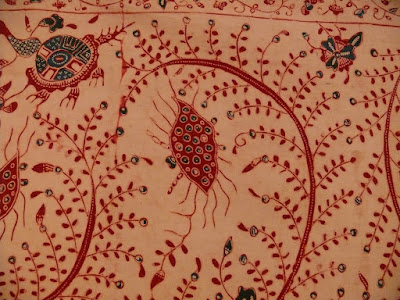 Detail of sarong, made in a Chinese workshop, Pesisir area, 19th-20th century.  On the Batik a so called zoo design, 'drintin'. Animals are placed among the floating seaweed pattern, 'ganggeng'. Of course I made a picture of the most unclear animal of the bunch...
At Galerie Smend 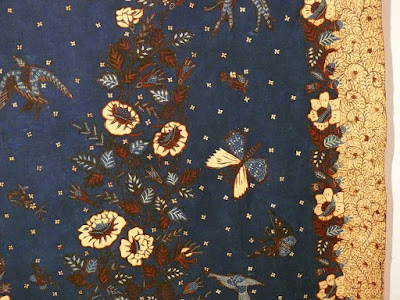 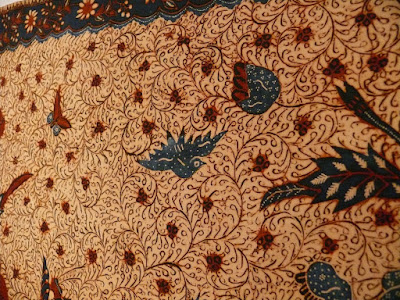 Details of Sarong Buketan, signed "M. Coenraad. Pajitan", Pacitan, 1890-1900.
The Coenraad sister opened a batik workshop in Pacitan in southwestern East Java around 1880. They are known for their indigo blue with sogan brown floral motifs. The chrysanthemums (not in this photo) indicate it was for a Chinese customer.
At Galerie Smend 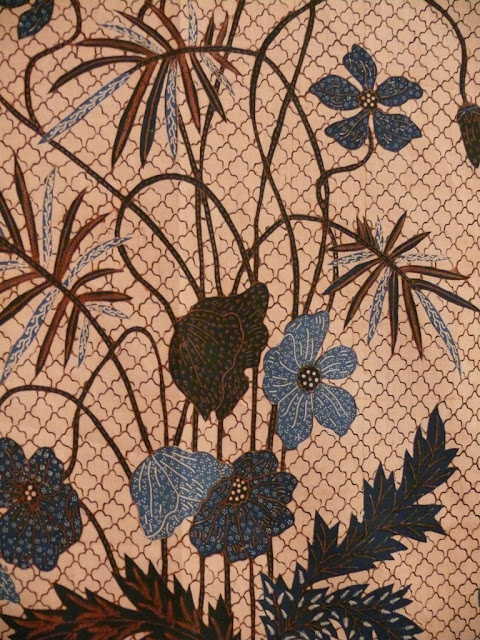 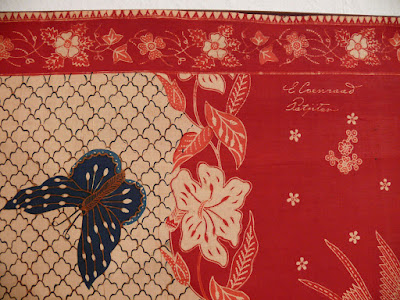 Details of Sarong Buketan, signed "E. Coenraad. Pajitan", Pacitan, ca. 1900-1910.
An unusual Batik for the Coenraad sisters, which I very much liked. The Art Nouveau style of the flowers, the bright red, the wonderful pattern on the background.
This was part of one lucky girls trousseau!
At Galerie Smend 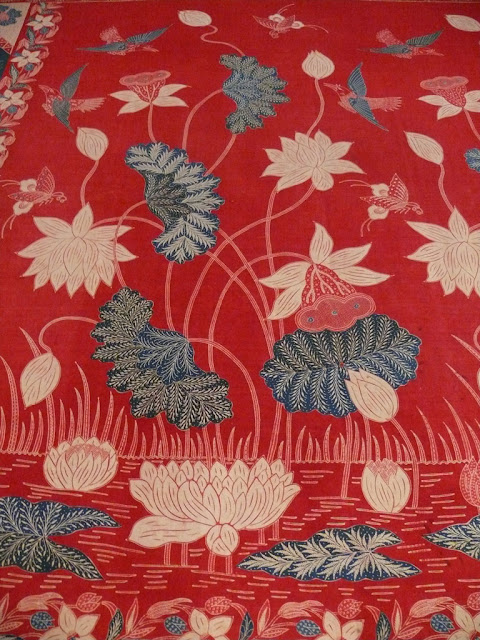 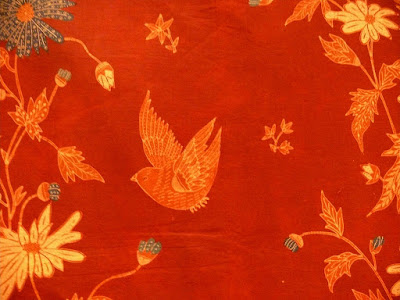 The typical Van Zuylen bird. Detail of Kain Buketan, signed "E v Zuylen", made in Mrs Eliza van Zuylen's workshop, ca. 1930. My photo is somehow bright red, but in the book it is much darker. In the text is noted that the dark colours indicate that this cloth was suitable for an older woman.
At Galerie Smend 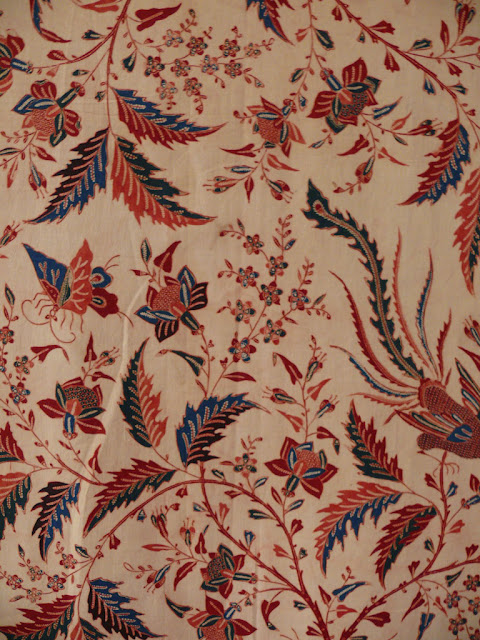 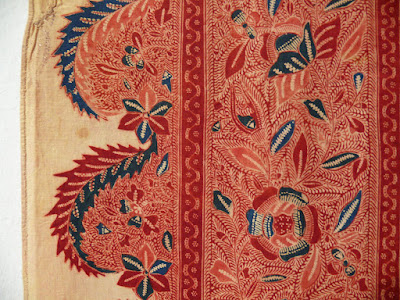 Details from sarong from Lasem or Semarang, second half 19th century.
At Galerie Smend 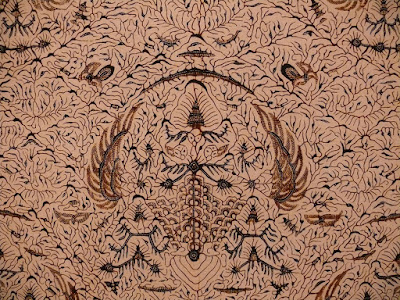 Detail of sarong made in the Masina family workshop, Trusmi, near Cirebon, late 19th century. Wheras in Central Java a sarong is considered to be an everyday garment for commoners, in West Java it is also worn by the nobility. The motif on this sarong indicate that is was made for a member of the Kesepuhan or Kanoman Sultanates of Cirebon. Admire the background, it is flawless!
At Galerie Smend 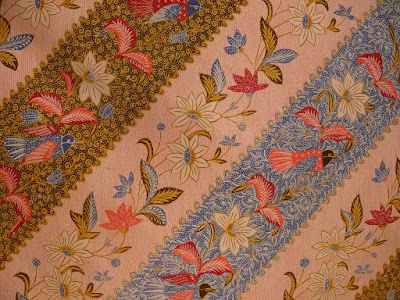 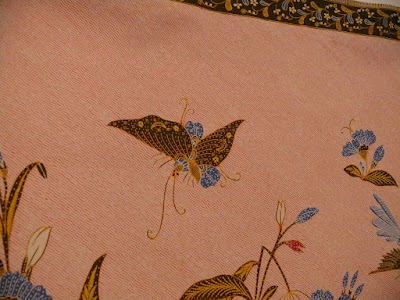 Details of sarong dlorong buketan, signed "Nja Lie Boen in Koedoes", made by Njonja Lie Boen In, Kudus, 1920s. Lie Boen batik production was rather limited (which I can image drawing those fine lines in wax) and her clients were mainly members of her extended family.
At Galerie Smend 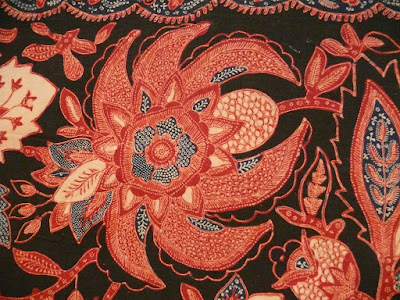 Sarong, made in an Indo-European workshop, Pesisir area, ca. 1860.
Very clearly based on Indian chintz from the 17th and 18th century.
At Galerie Smend


The collection of Batik shown in the book 'Batik, Traditional Textiles of Indonesia from the Rudolf Smend & Donald Harper Collections' and of which I could observe a selection up close, shows that Batik at the turn of the 19th century, where made by and for a wide range of people who used this technique to express their wide range of interests, beliefs and roots.
And I hope that during my visit to Java later this year I can still find theses different styles and expressions in a cloth that was used by so many to set their mark, to express who they were and what they stand for. And just wanted to look beautiful while doing all that!