For my upcoming project, my second 'Journey to Batik', I'm exploring how Batik inspires local artists on Java by asking them to make a local motif in their own style and technique.
In some regions the traditional pattern is still very clearly found in the Batiks being made. Like the 'Megamendung' from Cirebon. When you spot these abstract clouds on a Batik you can surely say its made in Cirebon. But there are also, maybe most of patterns used today in Batik that changed in location, meaning or evolved into a new pattern.
One popular motif that is well known outside of Indonesia is the 'Parang' motif. A 'Parang' is a type of knife and the motif is also known as the broken knife pattern. If people here (in the Netherlands) see a 'Parang' motif they will say "That is real Batik!". Even if it is clearly printed.
The brown and white patterns that is repeated diagonal on the cloths is for most a pattern they would like to wear or at least own a cloth with it. But the thing is with the 'Parang' motif that it use to be exclusive for royalty. The royalty in Yogyakarta and Surakarta (Solo) had a motif that was only intended for them. In a still closed section of the Kraton (the Sultan Palace) in Yogyakarta you can see these Batiks for the royal family, but it is forbidden to take pictures.
Later the 'Parang' motif was used by other families to show their wealth an high born status. Different families got there own 'Parang' motifs and today at weddings the families will still wear their owns motif. Everyone will wear the same pattern and its nice if you see pictures of the families standing next to the wedding couple forming almost one repeating pattern together.
Batik fashion hero Iwan Tirta introduced 'Parang' in the nineties as high fashion. He made dresses and shirts with the motif enlarged on it or mixed between bright flower patterns. Beautiful pieces about which the marketing people writes today: "'Lereng' symbolizes fertility, the desire for prosperity, determination, to have courage to do what is important to both the nation and the people."
Who doesn't want to get all that from a dress! 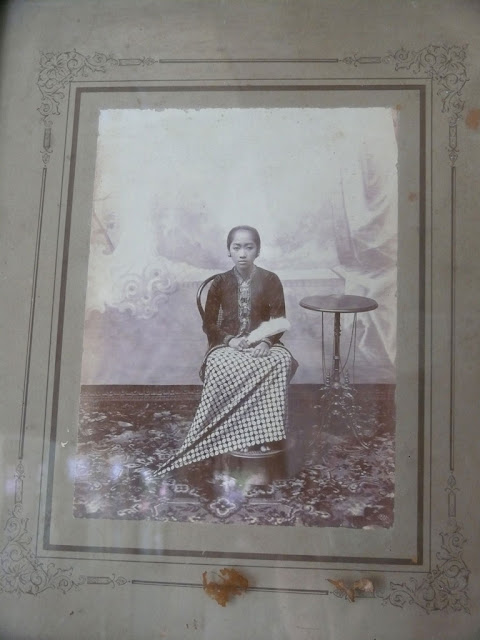 At the kraton in Yogyakarta

The motif this post is about is a well known pattern on all of Java. But what the origin of pattern is, is not so clear. 'Kawung' is a Batik motif made mostly in the colours brown, black and white. The patterns is a repetition of oval shaped circles. It is a simplistic pattern, nowadays made with cap, which makes it a very fast pattern as well. If you look closely you can read the pattern in two ways, one of four oval shaped forming a one whole or one circle with a diamond shape in its center.
It is thought to be a royal motif too. At the kraton in Yogyakarta there is a picture of a woman wearing a sarong with 'Kawung'. The motif is also linked to the Sultanate of Mataram, it was the last major independent Javanese kingdom before the island was colonised by the Dutch. Yet 'Kawung' i found on temples from the 13th century on Java. So it much be older.
When I travelled on Java in 2009 I would ask at ever Batik shop: What pattern is typical for here? And without doubt they would pull out the 'Kawung' pattern. I don't know if it is because they thought it is typical for their city or that it merely the most popular motif. But it surprised me and made me wonder about this pattern.
'Kawung' was being made everywhere I went. I spotted it in Yogyakarta, Solo, Pekalongan and Semarang. It was used traditionally as one pattern covering the cloth or to fill up parts in the design. 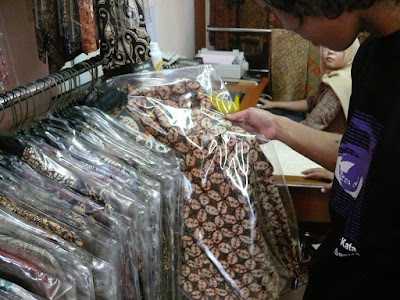 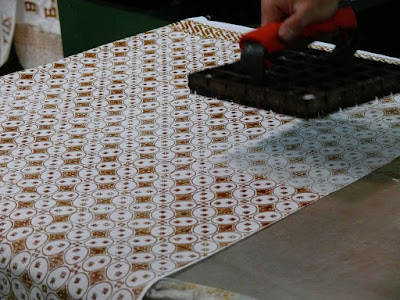 In Yogyakarta, Kawung made with cap 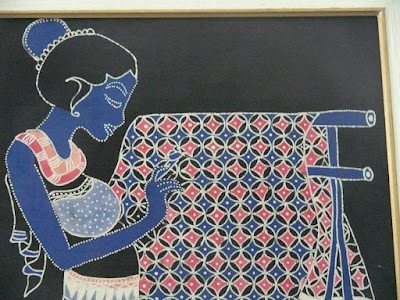 The 'Kawung' motif symbolizes four abilities one must possess to be a good person. They are represented both in the motif and in the use of colour. The colours stand for character traits, but also for the wind directions. Like a moral compass. The shape that is repeated is also like a compass, a wind rose even, and it would explain why I'm fond of this pattern.
Putih, the colour black or blue is the North. It stands for tranquility, peace, firmness and also for being bold.
Hitam, the colour white is the East where the Sunsets. Its a new beginning and stands for purity and honesty.
Merah, the colour red or brown is the South. It stands for strength and also anger.
Kuning, the colour yellow, is the West. The full circle is made, grace and knowledge are on your side.

This four points of the 'Kawung' pattern explain that you live your life meaningful and even tells you, you are the perfect man. Even a god. It is thought to be a pattern of the times that sultans were representatives of the gods and therefor were gods themselves.
But it is not necessary a motif for demigods. It can just represent the way you have to live. Also the making of the motif could have been part of reaching for the devine. When this pattern was first being made on a cloth, it wasn't made with cap but with canting. If you have to repeat the same pattern over and over, you will go through the different stages as mentioned in the description of the colours. The four abilities or character traits. You will have to stay focussed, have to make it neatly. You have to be patient, but you will get overwhelmed, maybe even exhausted or angry. But as you get closer to reaching the end you will enjoy this victory, calm and with a little smile. And the final cloth will be proof you possess all four. In Pekalongan, Batik with 'Kawung' together with 'Parang' 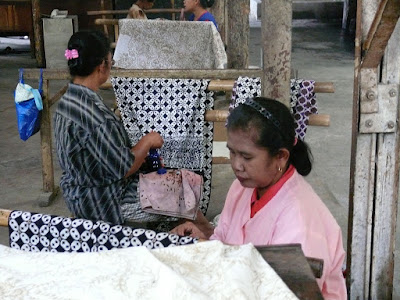 But how did they come up with the 'Kawung'? For this question are also many answers. First there is the name 'Kawung'. It could have been taken from 'Kwangwung'. A 'Kwangwung' is a Rhinoceros beetle. This kind has a black head with the typical rhino-horn on it and a nice shiny brown body that is oval shaped. They are very popular on many places in Asia and used for gambling fights. Since the male Rhinoceros beetles naturally have the tendency to fight each other for the attention of females, they are the ones used for battle. But is this angry, little, fighting beetle the base for the 'Kawung' motif?
Another one is that the ovals are abstract leaves of the Lotus or the scale of a fish, but in my opinion that is just to easy.
The one I really like is the fruit of the Sugar Palm, or Enau, or Arenga pinnata. If you split open the 'buah kolang-kaling' it will show the white sweet soft fruits, protected by a yellow skin and surrounded by a brown bark. How it is shaped is very close to the 'Kawung motif' and would give also a nice extra explanation of its meaning.
The sweet core is hidden by a thick, hard layer. Showing sweetness, friendliness comes after the tough, strict approach. Or you have to go through the bad before reaching the good. Also the whole Sugar Palm is useful and the fruits gives fortune. So not a bad fruit to put on your cloths. 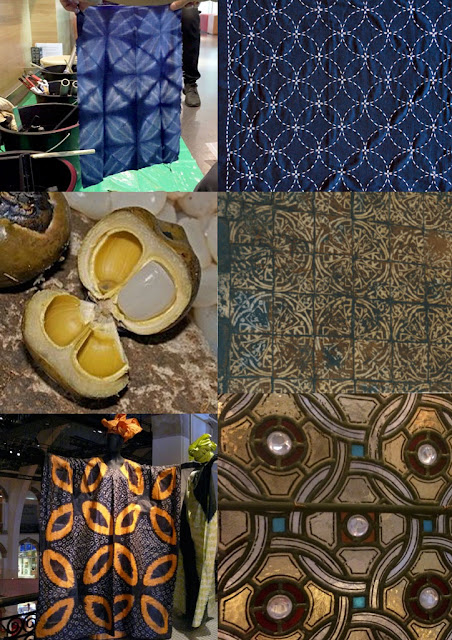 But there is more to 'Kawung'.
This motif is not only a motif in Batik, but in many different art forms. It is not called 'Kawung', yet the pattern is the same. I started spotting 'Kawung' in African and Japanese cloths, in tiles and even in bricks walls. I realized that the motif is maybe not designed, but maybe just a logical result of technique. And properly not the canting technique of Batik. I realized this when I saw a picture of a Shibori workshop. The cloth was put folded and bound into an Indigo dye. When it was unfolded a perfect 'Kawung' pattern in Indigo was visible on the cloth.
There is a logic in the pattern that makes it easy to get invented. It happens by placing bricks or tiles in a certain way. It happens when a suface is divided in a certain way and it happens when a cloth is folded in a certain way. Patterns are based on natural phenomena and natural phenomena form the base of ever pattern. So another nice one for the Pattern vs. Technique debate and a quest for answers during my stay on Java. later this year.

Notes:
* 'Lereng Parang Kupu Teksing' by Iwan Tirta on iwantirtabatik.com
** all photos of 'Batik Kawung' are made by my during my first 'Journey to Batik' in 2009