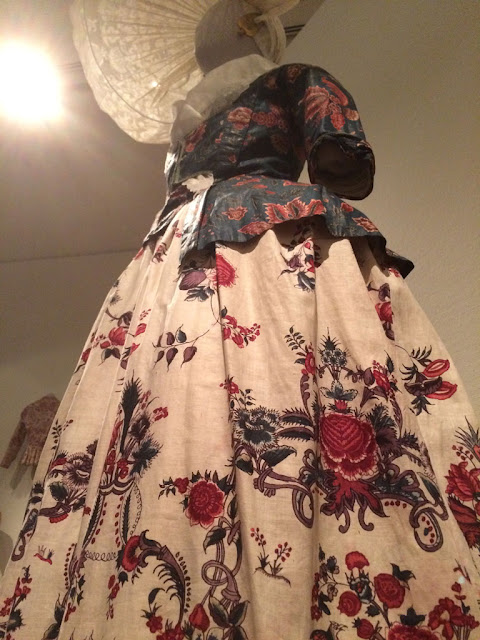 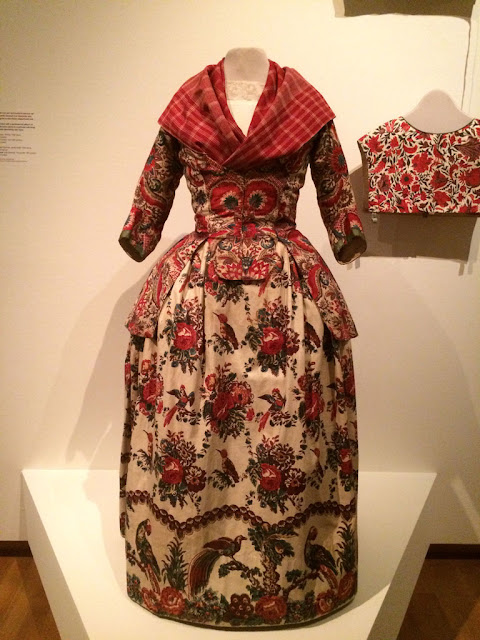 Dutch traditional wear with a Chintz skirt
filled with exotic birds like parrots & the Greater bird-of-paradise
I woke up this morning from a dream that felt so real and made me realise I'm still hurting from something I didn't really notice before. In my dream I was in a long line of people presenting themselves. I presented this intricate ricecarpet (which I'm not even sure I could make in real life). The jury came by and I saw everyone being excepted and jumping of joy. When they arrived at my work they just looked displeased and told me "I didn't fit the profile". When I woke up I remembered that the people next to me, who were accepted for whatever we were hoping to get into, were actually two people who rejected me in real life. Or well my work, but if you are an artist you know what I mean.
One of the projects I didn't get selected for is now on display as part of the 'Chintz' exhibition at FriesMuseum in Leeuwarden. I just read back my proposal and I'm still puzzled why it didn't fit. I wrote about how I would love to explore the patterns, the use of colour, how I am researching Dutch Folkart and how they are influenced by other cultures and how in my opinion you can't just talk about Chintz when you want to show the cross-cultural exchange caused by the VOC: "The history of textiles can not be seen without our colonial history and the trade routes of the VOC. I therefor would like to say that your project could benefit greatly if not only the VOC route with India is explored, but also the other trading routes that influenced the Dutch and many other cultures."
I got a reply from them that my plan didn't fit their ideas, research plan or final products. I believe that my candidness about their project is what failed me to be part of the team.
Only one artist in the "final" project addresses Chintz within the colonial history. Unfortunately in the exhibition only this is said about his work: "Luxury goods from the East have both a price and a past. Inspired by this, Jasperse designed a traditional Zeeland 'boezoeroen' (Dutch blouse) with a pattern that refers to the VOC's textile trade".

Super Surprise Pattern spotted at the must-see exhibition 'The world of the Dutch East India Company (VOC)' at @nationaalarchief. Exhibition tells the story of the VOC with a lot of interesting books, letters, maps and some porcelain, smells (hidden in globes, really!), videos and textiles. This modern print by @gerardjasperse from 2014 is one of the rare newer things on display. A Must see, must learn-exhibition you can not miss❣️#nationaalarchief #exhibition #colonialhistory #mustsee #textile #pattern #india #voc #dutcheastindiacompany #knowyourhistory #denhaag #gerardjasperse

I think what bothers me most, is not that I didn't get picked. Well it bothers me, but being rejected is never easy or fun. The number of Artworks I could have made if a little more people believed in my plans would have been a lot more...But what bothers me most is the total lack of owning up to Colonial History.
I was super excited when I heard about the project and also about the Chintz exhibition. For me it seems like the perfect opportunity to talk about our past and the perfect tool to educate people. But there is such a big cloud surrounding our history. The fear of saying the wrong thing or having to address things we rather not talk about, result in, for me, painful exhibitions & lectures. It started with the exhibition from 2015 in the Rijksmuseum, 'Asia > Amsterdam. Luxury in the Golden Age'. It was literally gold, silver, delftware and tapestries. All the luxury goods the rich surrounded themselves with. Not a word on how we got so rich, what influence we had on Asia or any other part of the world.
I also went to the symposium and it was about four lectures on Delftware in paintings from that time and what people ordered in Batavia (Jakarta during the Dutch East Indies) to be custom made for their tropical homes. I understand that many of our past stories are hard to talk about or even grasp, but don't you agree this is not the way? This is not respectful, it is even insulting.
So I had high hopes for the 'Chintz' exhibition and everything that would be organised around it. Maybe I missed some hidden explanations in the texts on the walls of the exhibition, but I can't say I felt educated on our history by it.
The exhibition focus is showing Chintz, and a lot of them. Chintz made in India, both original and adapted ones, copied versions from Europe and new interpretations. In the second room of the exhibition they quickly introduce the VOC with a huge map, the work of Jasperse, a morning gown in Japanese style and a very interesting skirt. I first read about the skirt on the Modemuze blog. On the skirt is a scenery of ships from the Dutch West India Company on their way to or from Curaçao. To my surprise I found the skirt was displayed almost hidden, behind a travel trunk, in a far corner of the stage. I believe there is a blow-up of the skirt on the wall, but its so different from seeing the actual textile and the impact from it. This was something I would have loved to learn more about! The blogpost on Modemuze mentions there is more about the skirt in the publication of the exhibition... 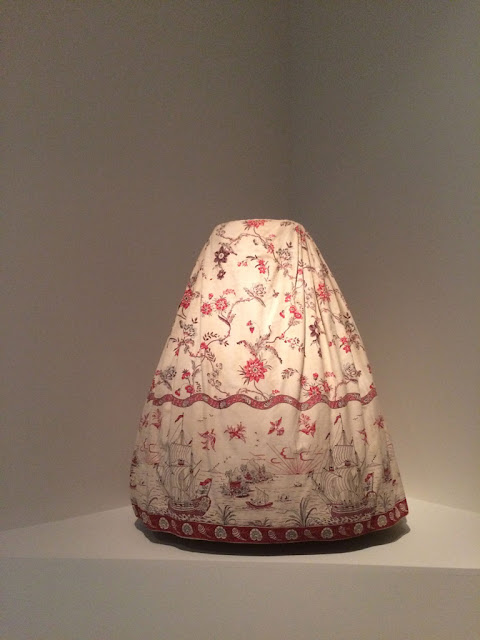 The skirt with a scenery of ships from the Dutch West India Company (WIC)
on their way to or from Curaçao at Friesmuseum, Leeuwarden
When Chintz is explained it is mostly put in context with the fact that it was a useful fabric to trade spices with in the Indonesian archipelago in the 17th century. And that it later, by the end of the 17th century, became a popular textile in Dutch households. First used in interiors then in clothing. Usually they leave it at that, no further explanation needed. Apparently everyone is well aware of our colonial history, trading routes and business spirit. Don't expect any TABOO kind of confessions... by the way, I can't wait for the second season of that! 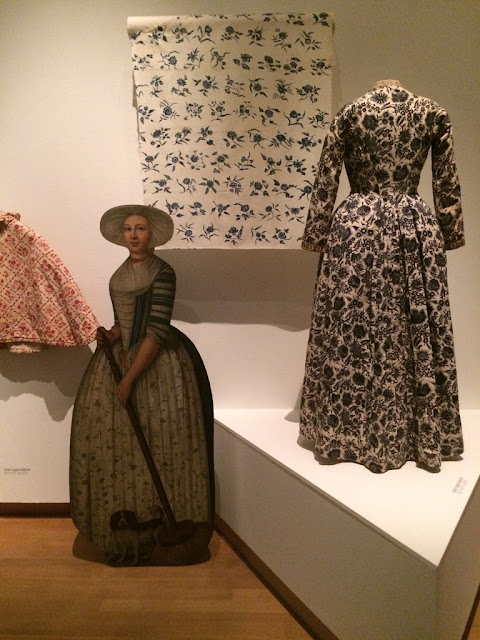 Wooden fireplace figurine (Placed in front of the fireplace during Summer)
showed with other Chintz that are suitable to wear in mourning
at Friesmuseum, Leeuwarden
Chintz can still be found in our traditional wear, from amongst others: Hindeloopen, Volendam, Marken and Spakenburg. But you see it also in costumes from the 18th century that were based on France or English fashion. The fashionhouse Oilily, founded in 1963, based their designs on Chintz found in traditional Dutch wear and the new ones made in India. The Dutch brand was huge in the 80s and its typical colourful, playful and multicultural clothing is well known. Funfact, the Oilily scarves, that we Dutch link to a certain group of people, is actually a hot item in Staphorst. This little Dutch village known for their traditional wear and folkart wears these scarfs and transform them into 'kraplappen'. Their use of colour and motifs fits with what they traditionally used, but isn't made anymore.

The Summer day of the Dutch Costume Association (Nederlandse Kostuumvereniging) was all about Chintz this year. A new part of the project, the project that inspired this post, got launched. I haven't seen it at the exhibition yet, but it is an alternative tour of the 'Chintz' exhibition. With the website 'Meanwhile in India', www.ondertusseninindia.nl, Saar Scheerlings and Lieselot Versteeg share reflections from India on the shown pieces. So for example a Chit maker, Chit is the wooden stamp used to make Chintz, reflecting on the 3D printed stamps in the exhibition. I quote: "Everyone sees it as Craft (Making Chit) and then there is modern techniques [Like 3D printing], but that is stupid. Because this newer techniques will became older and older and will be [seen as] Craft [one Day]". An interesting project which shows at least a little bit more of the makers in India then just the technique.

When you know you own that print!
Wimpje researching her traditional wear for the exhibition that is now at Museum Spakenburg
Another nice presentation was about a new exhibition in Museum Spakenburg. With the title "How Dutch is my traditional wear" Spakenburgs own ambassadors of traditional wear, Wimpje Blokhuis and Hendrikje Kuis, started this quest visiting museums in the Netherlands and looking at piles of Chintz. The little publication was sold during the Summer day and I love that their quest ends with more questions! As they put it on the website: Wimpje and Hendrikje went looking and came to the conclusion the journey is more important then the purpose. I haven't been to the exhibition yet, but I hope to go soon. 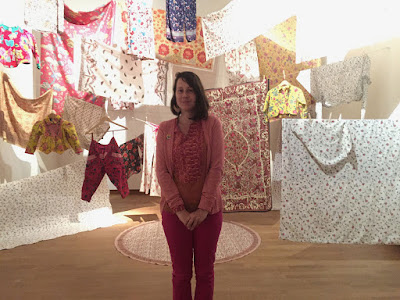 Sorry for this, is it a review, is a rant, or is it just one of those blogposts? I don't know, anyway, thanks for reading till the end and please feel free to comment below on where to see, read & learn more about Chintz, Colonial History, WIC and the VOC.