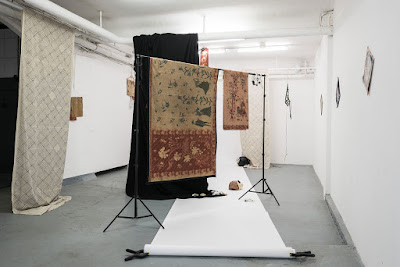 Where Batik Belongs by Ada Van Hoorebeke, Frankfurt am Main, 2017 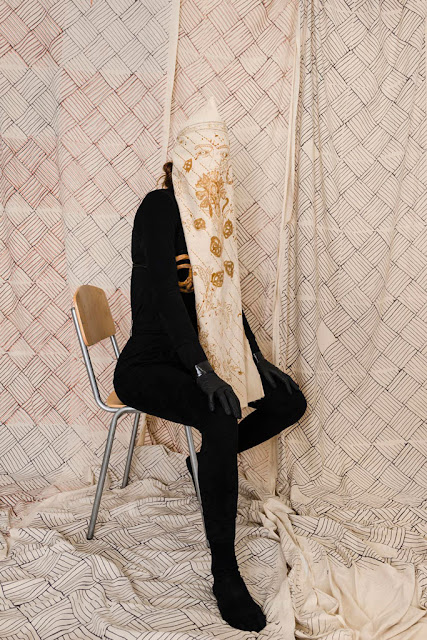 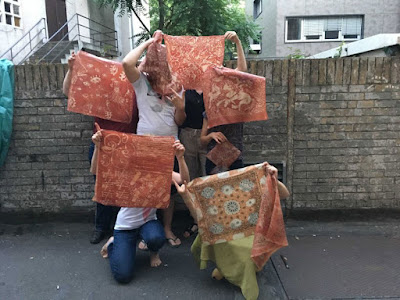 This weekend I'm travelling to Brussel to see and to participate with the work 'Fake Calligraphy' by Ada van Hoorebeeke and Maartje Fliervoet, a co-creation with the Gent based Artspace Manoeuvre.
I met Ada a few months ago when I was in Köln for the Mini Batik Symposium at Galerie Smend. Rudolf told me another one of the "new generation", as he calls us, would join. When I introduced myself asking about her upcoming exhibition, Ada asked me if I was the writer of this blog. She told me she got inspired by my posts about Fairytale Batiks. And that she had printed copies of it to make her exhibition 'Where Batik Belongs'.
We continued sharing during lunch. She learned making Batik during a residency in Gambia and is now exploring Javanese Batik. She complimented me on my interesting take on Batik and that she really liked my writing. While continuing Ada casually said: "My birthday is on Batik Day, the 2nd of October". I casually replied: "Mine too ". 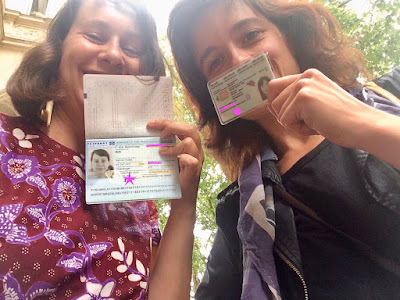 Me & Ada, Selfie to share our birthdate is on Batik Day

Talking about synchronicity! Rudolf made a special announcement after lunch of our discovery.
In Where Batik Belongs Ada was exploring the Fairytale Batiks and especially Little Red Riding Hood. She gave a Bandana workshop in which you make your own red dyed Batik headscarf. I recently learned that Bandana comes from the Indian technique Bandhani which is a type of tie-dye. So a different way of creating dots on textile.
Ada's style seems rough, investigative and spontaneous, yet everything comes together, fits. Like a pattern taken from an actual Batik Tulis from the Smend collection which is repeated as a backdrop for the Grandmother picture (see picture above). The dyes are natural, yet from unconventional sources. An Art take on Batik. Where Art meets Traditional Textiles. When Batik is put into a museum as Art. When you are exploring where Batik belongs...

This weekend wil be a different yet again interesting take on Batik.
Fake Calligraphy is a sculpture inspired by the calligraphic batik, Batik Besurek, a tradition from Bengkulu (Indonesia). Batik Besurek, originally conceived by Indonesian Muslims, is derived from the Arab script but the signs are not always readable as such. The Fake Calligraphy sculpture presented at WIELS is inspired by those calligraphic batiks that are playing with the aesthetics of a written language abstracted from its original meaning. The sculpture is made as such that it can be activated, reminiscent of a workshop, where it serves as an environment to create a new interpretation of calligraphic batiks. In this sculpture different stages of batik production such as creating a design, transferring it in wax on texte and dying with natural dyes are used as a means of communication that goes beyond language barriers. Fake Calligraphy aims to be a platform for exchange of speech, body language and the sharing of different cultural knowledge in an artistic and social context.