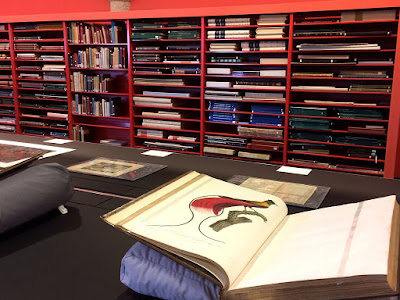 On the 14th of September 2017 the Asian Library at the University of Leiden was opened with a grand opening filled with lectures, pop-up exhibitions, dance and films. My film 'The journey to Batik-Tari Batik' got its first screening on that day! So on my Social media you already saw me enjoying a rickshaw ride in the pouring rain with my love, spotting Queen Maxima and watching the amazing opening dance by Aafke de Jong, but I still have more to share and I love to look back at this special day.

Early morning the ceremonial opening started in the Pieterskerk. The church was filled with people who dressed all very nicely for this occasion, mostly in suits, but I spotted some overseas traditional wear and textiles. I was happy I treated myself to a custom made Batik Tulis dress!
After a little wait for the royalty to arrive, the opening started with a traditional Balinese dance followed by a modern interpretation, improvised by Aafke de Jong.
It almost never happens, but I didn't make any notes that day, being too nervous for my screening later on, so you just have to believe that the opening-speech, especially the one by Professor Peter Frankopan was really good!

After eating a sandwich while staring at the queen, we headed to the University of Leiden. The program was in all buildings and even the Hortus joined in. We first went to the Asian Library - Cinema Room Vos. A new part of the library with a big screen and lovely chairs. When we entered my parents were already inside! Such a nice surprise!
With pounding heart I watched the movies, waiting for my own... it was so great to see the film on the screen! What a perfect place to premiere my film!* 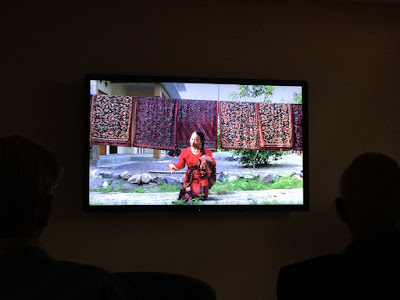 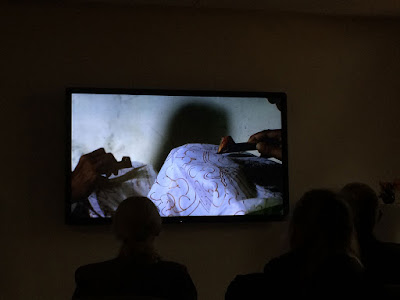 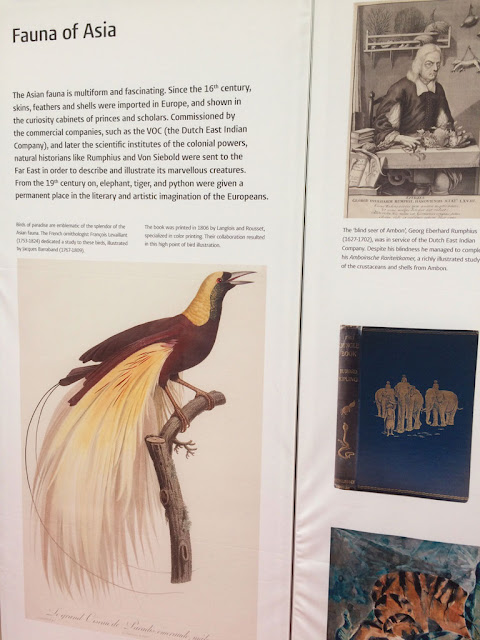 Panel in hallway of the Library 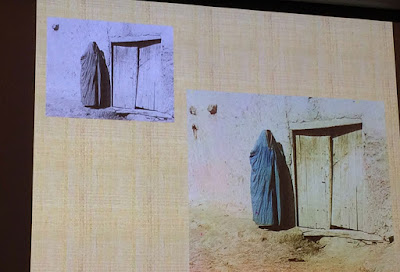 While the films continued playing in the Cinema Room Vos, we went to the lecture "Dressing the 'Stans': Textiles, dress and jewellery from Central Asia" by Dr. Gillian Vogelsang-Eastwood in the Academy building. What amazing places to study at by the way, wauw, lucky students!
The lecture about the exhibition with the same title at the Textile Research Center, on display till 21 December, gave an insight into traditional dress of Central Asia and why TRC chose it. Next to having an interesting collection of pieces to show, they found that the Leiden Asian Year had a lot on Southeast Asia, but nothing on Central Asia. To fill the gap they made a selection of textiles worn and used in Afghanistan, Kazakhstan, Kyrgyzstan, Tajikistan, Turkmenistan and Uzbekistan. In the presentation she also showed some new developments on textile research. Black and white photos coloured in. But not in a technicolor kind of way, in an actual scientific way in which they can see which colours the grey-tones must have had. It results in very colourful group portraits, but also a women posing in a burqa which is now a beautiful Indigo blue (see photo above).
It changes your perspective on a history that looks grim and without color, but instead was filled with colours, patterns and gorgeous textiles. Love to know and see more of this photo-project, so if you read this and you know more, please comment below! 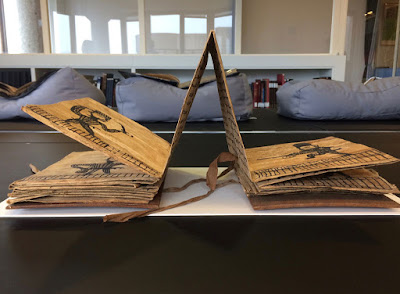 In the Dousa Special Collections Reading Room, Pop-up exhibitions were made throughout the day. Unfortunately we could only see one. For next time, yes please, University Leiden, make it a two day thing. Everything on the program was amazing, but impossible to see it all.
Anyway, I found a new place to live. No seriously, but I wouldn't mind to spend a couple of days there. What a marvellous collection of books! Liesbeth Ouwehand made a selection of books with and from animals! I joked I wouldn't get this close again to a tiger ever again, so here was my chance! Next to it was a bookcover made of crocodile-skin, wauw!
Also a selection was made of books in different forms like the magic books, Pustaha, from Sumatra. So special to see these beautiful books up close, I took many pictures so I could share some with you! 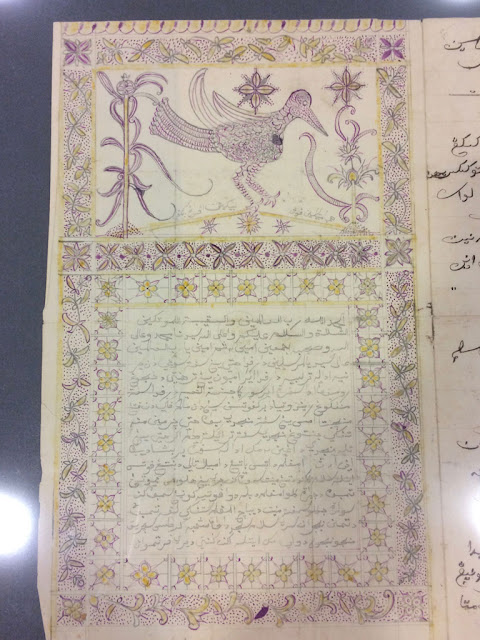 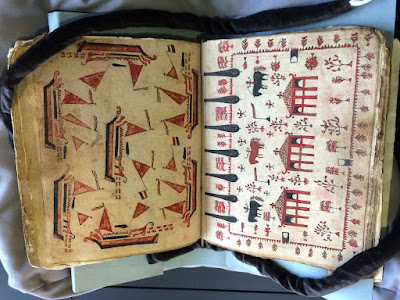 "Tatimbai Anak Dalom, a Lampung tale of a young man, Anak Dalom,
living at the court of Bangkalulu who sails to Petani to abduct his two chosen brides"
Lampung is the region at the southern tip of Sumatra, Indonesia 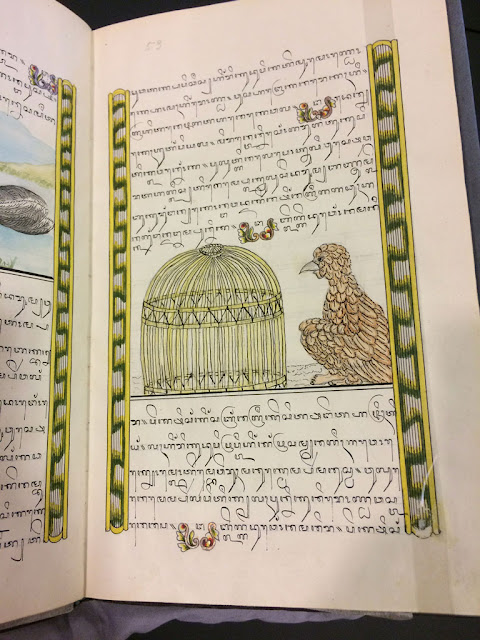 Part a collection of 31 fables with mostly birds as main figures,
look at this Pino kind of bird, lovely! 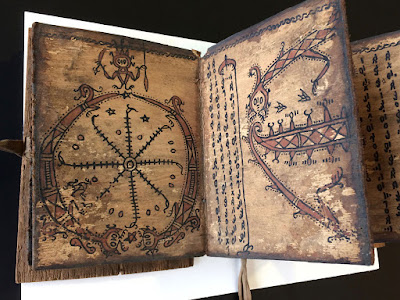 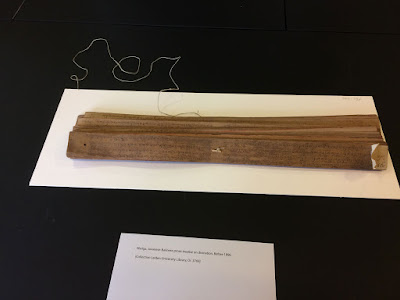 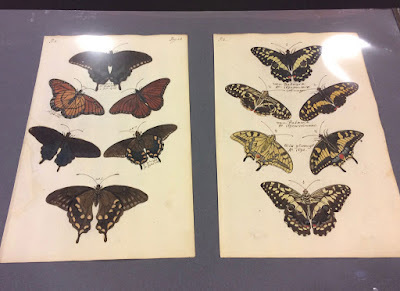 Manuscript in 3 volumes dedicated to insects and amphibians, around 1656,
Mayor of Delft and collector Hendrik d'Acquet commissioned artist to make drawings after his impressive animal collection 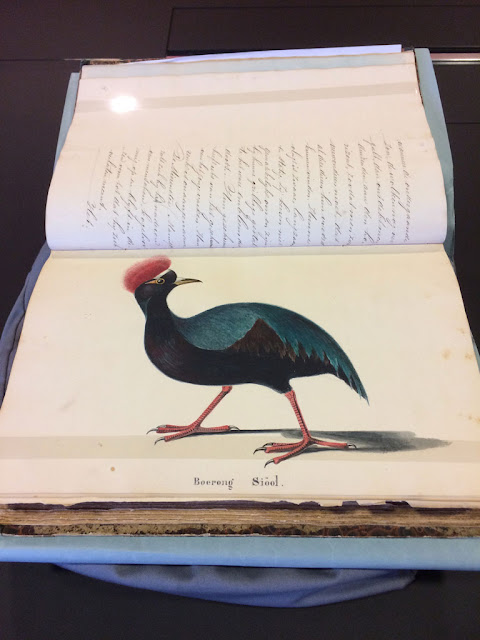 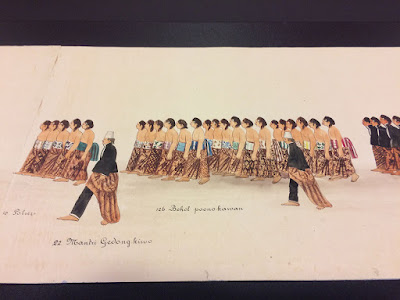 Watercolour by R.B. Djajeng Soedhirdja, made in 1904.
It shows the Sultan of Yogyakarta and his followers on their way to visit the Dutch Resident 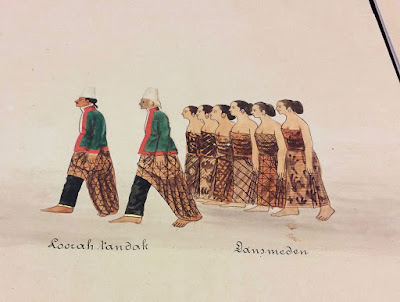 
Apparently anyone, not only students, scholars or professors, can use the Asian Library and make appointments to see the special collections. Also they are working on digitalising parts of their collection. There is now a crowdfunding to scan the 250 ancient tales of Prince Panji which will not only make them available for a wider audience, they will also be preserved. 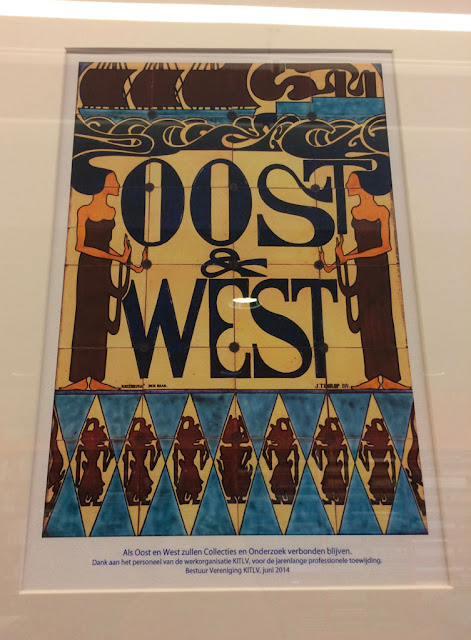 * For more about my film 'The journey to Batik-Tari batik' and for screening info, visit www.sabinebolk.nl and/or send me an email