Horn of Plenty II Reap what you sow 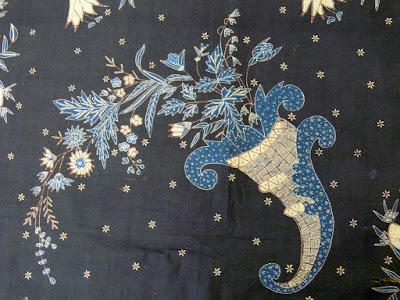 Detail from a Batik Tulis made by Maria Paulina Carp
From Pekalongan, Indonesia around 1900
Collection Tropenmuseum

In my research of patterns used in Batik and other textiles, I come across patterns that will pop up again and again and confront me with their meaning. One of this returning patterns is the Horn of Plenty. This boot or horn-shaped basket filled with fruits and flowers is the image for a rich and successful harvest. Thats why it is often used for Thanksgiving. But what does the Horn of Plenty actually mean?


The Horn of Plenty, or in Latin Cornucopia, originated from Greek mythology. Amalthea, the loving or feeding goddess, was present at the birth of King of Gods Zeus, as a goat. In one of the stories her horn breaks off. Whoever possess the horn gets everything he or she desires Zeus gives the horn to goddess Fortuna, the goddess of, right, abundance in wealth. But the horn is also linked to Dionysos, better known as Bacchus, best described as the god of overconsumption.
With this original interpretation this pattern gets a whole new meaning. It is not just a symbol to celebrate a successful harvest, but it seems also to celebrate the right of that harvest. That the owner deserves this good harvest.


In this context I saw the Horns of Plenty in a new light. I found the symbol a lot on Batiks from between 1880 and 1920. These Batiks were made in Indo-European and Peranakan Chinese Workshops. The cloths were of the highest quality made on demand by one specific group of clients, the Dutch and Indo-European living in the former Dutch East Indies.

Batiks were an important tool to wear, they represent who you are, what your descent is and what wishes you have, but they also show off your status. The pattern choice of the Dutch and Indo-European clientele is kind of sweet in this specific period  - like bouquets, butterflies, birds and once in a while a fairytale figure. So I knew the Horn of Plenty didn't get on the cloths by accident, they were chosen.

As I mentioned before, this pattern kept popping up. After first learning about this pattern in Batiks, already 6 years ago (see previous blogpost 'Horn of Plenty'), the pattern wouldn't let me go. I saw it on other fabrics; in lace, in embroidery on merklappen, on Chintz from India and kraplappen from Spakenburg  I even saw it in sculptures and gates. An entrance at the Zuiderzeemuseum is decorated with two horns of plenty! I spotted them also on handbags, on the handle and stringed in beads, on golden 'ear irons' and other jewelry.


Seeing the symbol so many times, I started to see a pattern. The symbol was used in a period even earlier then the Batiks I discovered it first on. It was used in many materials. Mostly materials and products that aren't naturally found in the Netherlands, but are directly linked to the Netherlands.
I realized this when I visited the exhibition 'Sits, katoen in bloei. The textile, with a colonial history, was exhibited in the Fries Museum and the symbol was on a skirt, underskirt, children's cap and palempore (a kind of bedspread or wall hanging).
The skirt and underskirt were shown together. They lifted one sight so the embroidered pattern in blue on white was visible really well. The Chintz skirt is from India around mid 18th century and the underskirt is embroidered in the Netherlands probably third quarter of the 18th century. 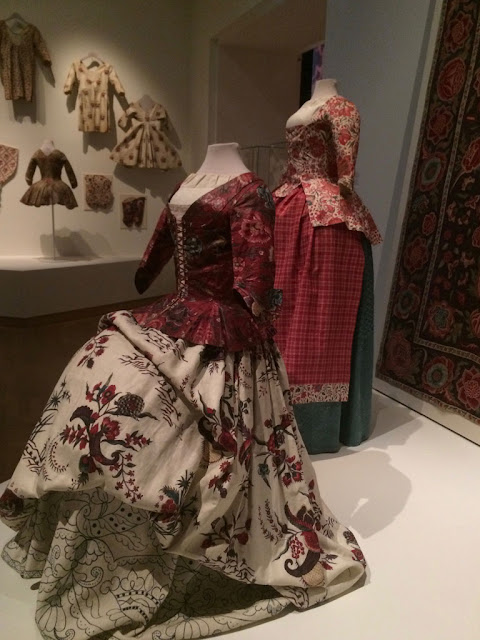 Skirt from Chintz with embroidered underskirt
both with Horn of Plenty symbols on it
at the exhibition ‘Sits, katoen in bloei’, collection Fries Museum


Gieneke Arnolli, curator of the exhibition and former conservator fashion and textile at the Fries Museum, told me the skirt of Chintz was donated in 1936 by Miss Meintje Beucker Andreae. The wearer was presumably Taetske Margaretha (van) Beucker (1710-1772) who married Daniël Hermannus Andreae (1697-1771) in 1733. He was born on the former island Onrust, now Pulau Kapal, before the coast of Jakarta (Java, Indonesia). He was a preacher in Blija and Hogebeintum in the province Friesland. In short, the skirt belonged to a wealthy family.
The underskirt is made of fustein, a European fabric of linen with European hand spun cotton, and was worn by Hykke Jans (1740-1788) from Makkum in Friesland. On 20 June 1762 she married Gerben Aages, presumably a captain.
So the wearers were European with a colonial past, just like the wearers of the Batiks. A past that can be directly linked to collecting an abundance of wealth. And those wealths were products gathered overseas. Like the Batiks and Chintz, but also the gold and silver. And which symbol fits that better then the Horn of Plenty...?


But the meaning of patterns and symbols aren't fixed. Symbols can gain or lose meaning, change or adapt in time, carrying out new messages, but they will always tell something about the period in which they where used most.
When I was certain of the meaning of Cornucopia, I was surprised twice by a different use of it. I spotted it between butterflies, lobsters, crabs and deer on a Batik made by Peranakan Chinese on the North-coast of Java. The Batik, also intended for Peranakan Chinese, was meant to be used as a door hanger. In shades of red all kinds of luck symbols are put onto the cloth.  During special occasions like Chinese New year, this cloth would give hopefully extra luck in the upcoming year. The Batik is from around beginning of the 20th century and wasn't made in a European-colonial context, but made in a old traditional context with a new symbol for luck added to it.

The second surprise came with an invite for the Keti Koti Talks organized by the Tropenmuseum. In their Facebook event they used a black and white picture of a lady in a beautiful koto, a kotomisi. The picture is from beginning 20th century. Her skirt and top are filled with big Horns of Plenty. I can't see what kind of fabric it is, but I was so happy with the wearer of this fabric and the new meaning she gives to it. 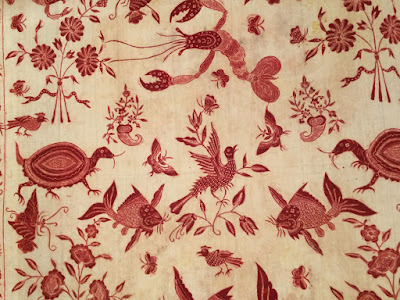 
New article today on @modemuze.nl 🎉Read about my thoughts and findings on the symbol ‘Horn of plenty’🎉This article is in Dutch {link in bio} I will translate it soon for my blog🎉Photo is a detail from a beautiful Peranakan Chinese Batik from the Rudolf Smend collection🎉 #modemuze #newpost #blogging #batikblogger #batik #batiktulis #hornofplenty #hoorndesovervloeds #thanksgiving #reapwhatyousow
A post shared by Sabine Bolk (@sabinebolk) on Nov 22, 2017 at 11:50pm PST

All photos  used in this article are made by me, for more examples check out the article on Modemuze "De Hoorn des overvloeds. Zoals we zaaien, zullen we oogsten"