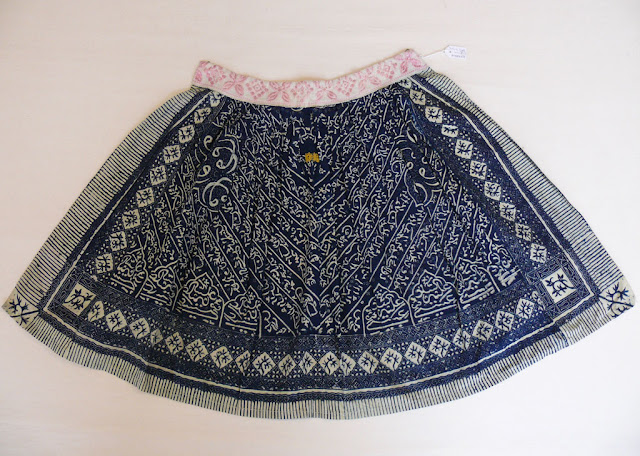 Searching for some examples of Calligraphy Batiks, I came across this piece in the online collection of the Textile Research Center. A Summer apron from former Dutch island Marken, in Dutch "zomerboezeltje", made from what appeared to be Calligraphy Batik. What a remarkable combination! So when Modemuze asked me to write an article for their FashionClash Festival collaboration blogpost-series, this apron seemed to be the perfect match, or clash, to write about. [1].


Batik is a resist dyeing techniek in which hot wax is used to create patterns on fabric. Calligraphy Batik, or Besurek Batik, is a style or type of Batik within the Indonesian tradition. These Batiks, often blue with white patterns, are full of signs recognizable as Arabic or Islamic Calligraphy. They were made on Java (in cities like Cirebon and Demak) and intended for the Sumatran market.[2] On Sumatra Islam was introduced in the 11th century. The style of the calligraphy used on Besurek Batik looks a lot like calligraphy from the Ottoman Empire (1299-1922), now Turkey, and it is plausible that the texts on Calligraphy Batiks were copied from these kinds of handwritten calligraphy.

Calligraphy Batiks are seen as talismans and give protection to the wearer. In most museum collections you'll find Besurek Batiks in the size of a headscarf.[3] These headscarfs were probably worn during prayers and rituals. There are also Calligraphy Batiks known in other sizes like sarongs, banners or even jackets with on it the soerat al-ihklaas – a verse from the Koran which would give the wearer protection.[4] Besurek Batik in sarong size weren't meant to be worn as such, they were used as shrouds or to wrap around important things like a Koran.


On old Besurek Batiks the texts are readable or recognizable as the Arabic saying Bismillah or as other prayers. Sometimes texts are styled into the shape of an animal or flower. A lion stands for Ali, a bird for Allah and Mohammed is depicted as a horse.[5] This form of zoomorphic calligraphy or zoomorphism is a way of depicting live animals without them being directly recognizable as such. The Koran disallows idolisation: within the Islamic Art its quite common to not depict humans or animals.[6]


Back to the apron from the Textile Research Centre (TRC) collection, because: How does Arabic Calligraphy end up on an apron worn as part of the traditional wear on Marken?

The apron, called 'boezel' in Dutch, is a typical example of wear commonly used on former island Marken before the Second World War. [7] Children had within this traditional wear their own 'fashion'. Boys would wear girls clothing, including this type of apron as long as they "went in the skirt" (“in de rokkies gingen” in Dutch)[8]

Between the age 5 and 7 boys started wearing pants. The age depends on achieved nighttime dryness of the children. Girls would wear red and white chequered aprons, while boys would wear dark blue aprons with a white pattern. The 'boezels' of the boys in museum collections often have a bunch of grapes om them. I found this motif also on other clothing items from Marken and even as curtains for a bedstead.

This house😍A building originally from Marken, decorated as it was in the 1930’s💙💛Everything in this house is soooo wonderful❣️Where did our colourful past go? Happy some of it is saved at @zuiderzeemuseum 💛💙I need to explore Marken better, check out the fabric used for the bedstee-curtain😍#marken #zuiderzeemuseum #enkhuizen #exploringdutchculture #traditionaldutch #textile #pattern #yellowandblue #tiles #Iwanttolivehere #tinyhouse
A post shared by Sabine Bolk (@sabinebolk) on Sep 22, 2017 at 1:41am PDT


A bunch of grapes has many meanings, among them fertility, but in this case it is more likely to be linked to Christianity. A bunch of grapes can be a symbol of the Last Supper and the blood of Christ, similar to the sacramental wine.

The population of Marken is mainly Protestant and this is expressed through their traditional wear in different ways. Not only the grapes, also in other parts of their clothing: they change it on Sunday and to go to church, for different celebrations or stages of mourning.
Between Pentecost (May-June) and St. Martin's Day (11 November) the Summer apron is being worn. These blue with white aprons for boys are in all kinds of grape-motifs. Later it seems all kinds of blue with white motif fabrics were welcome to be turned into Summer aprons.[9]  I found one with a chequered motif, one with a very fine floral motif and a couple with Batik-like motifs [10] and of course the one with Arabic Calligraphy. 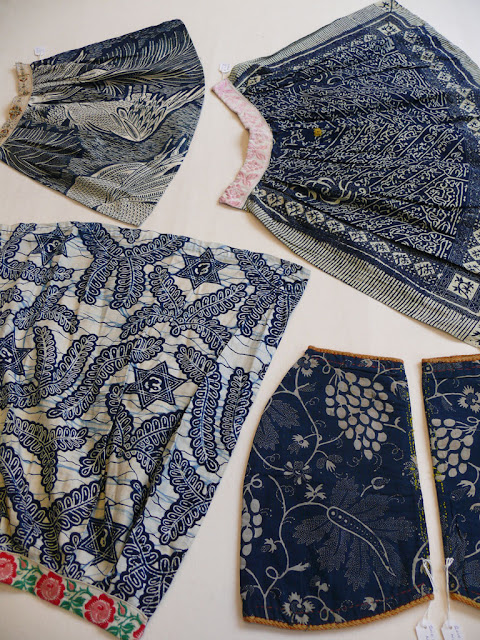 
I visited the TRC in Leiden to see the Calligraphy Batik-apron and other pieces from their collection. The TRC has an interesthing textile collection with all kinds of techniques and traditional wears. The requested items were sorted from the depot and were put neatly on a board covered with fabric. I was free to take photos and to touch them!

To my surprise the apron turned out not to be a Batik after all. It is an imitation Batik. Another apron I requested also turned out to be a imitation Batik. I recognized the motif of a Vlisco Wax Print I have at home. A Star of David is surrounded by leaves with a craquelé effect on the background.
So the Calligraphy Batik from the TRC is a copy of a copy of a copy: first handwritten writings or calligraphy from the Ottoman Empire, then an Indonesian Batik and then an imitation Batik or in other words Wax Print. 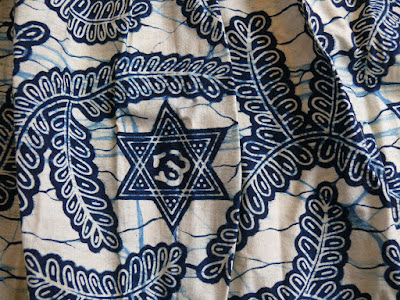 When Batiks are copied to make a pattern for a Wax Print, the pattern changes a little and become less readable. In the case of the Calligraphy Batik it would have been interesting if it still was readable. And if I could link it to an actual text or prayer which would tell us more about the use within the Islamic belief. I also thought if I could trace it back to the original Batik on which this design was based, I could figure out when and how it got on Marken. I found an original Batik before on which Vlisco based a Wax Print, so I started searching.[11] 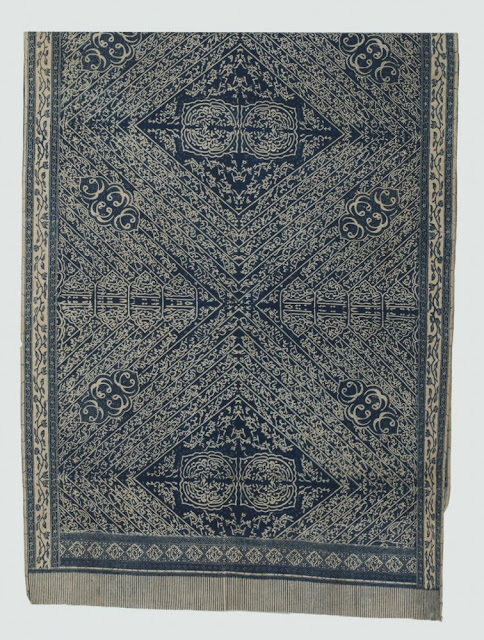 I actually found the original Batik in an online catalog, image above. The pattern is clearly the same, even the mirrored calligraphy placed in a triangle. I assumed the mirroring was a printing error, or a design solution to make a repeating pattern, but it  is actually already in the original Batik.

I haven't gotten extra information yet on this Batik, I will definitely keep on searching. The story isn't told completely yet, but what a story it already is. This apron takes us on a journey from the Ottoman Empire, to Indonesian Sumatra, through the Vlisco factory in Helmond to the former island Marken.


Two religions onto one apron came together in an unusual way. Is it a clash or a match, who knows?

See the original post on Modemuze for more photos www.modemuze.nl

Check out the project ‘Fake Calligraphy’ by Ada van Hoorebeke and Maartje Fliervoet in collaboration with Manoeuvre in Gent (Belgium), show at WIELS in Brussel.

Notes
[1] This blogpost was written as part of the series 'Fashion My Religion!' in collaboration with FASHIONCLASH Festival
[2] Nowadays Besurek Batiks are made on Sumatra in Palembang and Jambi
[3] Find more examples of Calligraphy Batiks in the collection of Stichting Nationaal Museum van Wereldculturen en het Wereldmuseum with search words ‘Kalligrafie Batik’.
[4] More on the jacket online https://hdl.handle.net/20.500.11840/169561. Believed is that this and other similar jackets were worn by warriors, or against the Dutch on Sumatra during the Aceh War (1873–1914), or when Indonesia became independent.
[5] Chapter 8 ‘Islamic talisman, the calligraphy batiks’ by Fiona Kerlogue in the book 'Batik, Drawn in Wax'.
[6] ‘Turn Of A Century’ on this blog with nice examples of Islamic influence on Batik. The heads of the people on the batik are turned into flowers.
[7] For more on the traditional wear of Marken, check out the second episode of Community Dressing on YouTube.
[8] From the book ‘Marken’ by Dr. P.J. Kostelijk and B. De Kock.
[9] Examples in the online collection of Modemuze with search word ‘boezel’.
[10] Apron, collection Zuiderzeemuseum, objectnr 021828. Apron for boy, collection Zuiderzeemuseum, objectnr 012284. Apron, collection Zuiderzeemuseum, objectnr 012285. Apron, collection Textile Research Centre, objectnr TRC 2016.0720.
[11] My previous Modemuze post ‘Batik ‘Tiga Negeri’ & de Java Print ‘Good Living’ in Dutch, on my blog 'Good Life II' in English.