With this recent visit to London, I noticed how my interests are interwoven with everything I do and how I am so much more aware of our history, and how it is interwoven with everything!
We had the great pleasure of spending some quality time with my lovely niece and artist Surya de Wit and her fiancé. Thanks for having us!
Of course I thought I planned nothing, but I fully planned everything, so our program was filled to the max, hehehe!
It was a wonderful visit and can't wait to go there again! Till next time London! 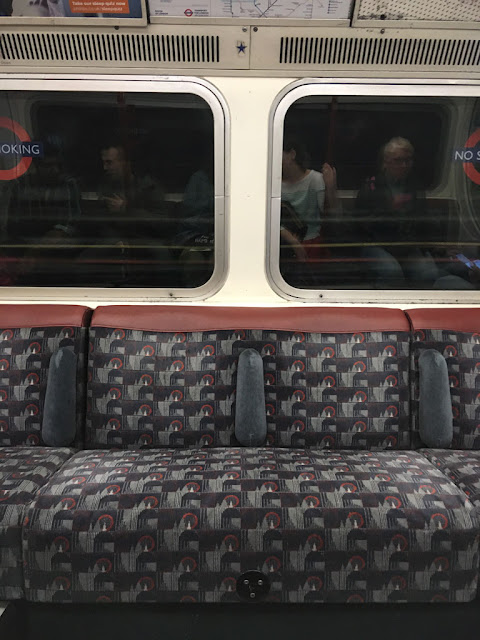 Our first full day, after arriving the evening before, started with a visit to the Alfies Antique Market. If you haven't been, it is a real treat for the eyes {and great pie btw}! I finally got the chance to meet Duncan Clarke and see his wonderful collection of Adire African Textiles.
We wondered through the rooms, looking at all the blingbling, fabrics and vintage, and seeing the tiniest cutest dog in the world, after continuing our day at the British Museum. 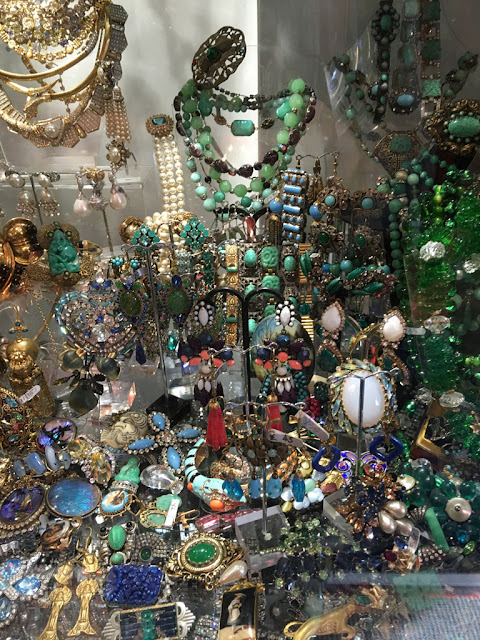 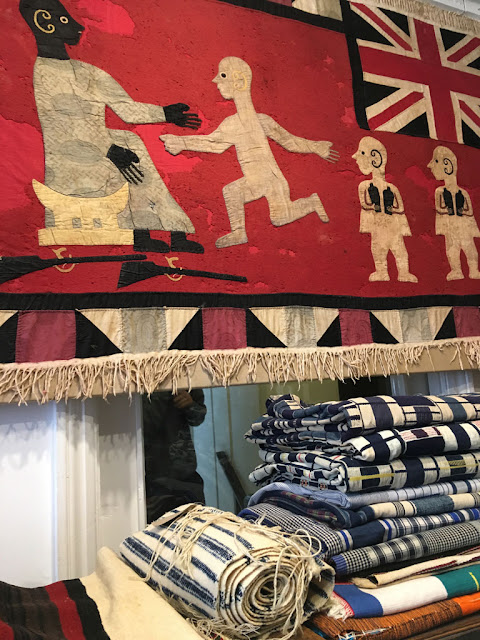 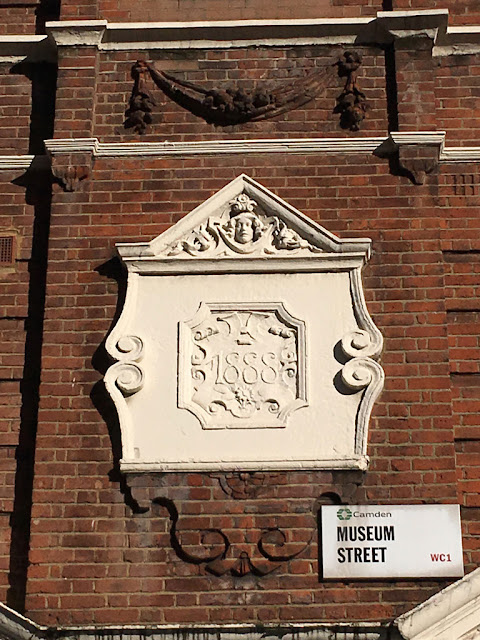 Museum Street across the British Museum

British Museum is big, busy and filled with so much high quality things. We chose to see the Mummies, Textiles & pretty things from Japan. Maybe an odd choice or just the perfect combination, who can tell? However, you can not stop wondering how these things ended up here and how this amount of things present a peculiar history... They don't go much into detail in the museum, and maybe understandably so. Similar like the Rijksmuseum; playing it safe or just presenting the bare minimum {The BBC series 'Civilisations' gives some amazing insights on this collection}.
In the African part of the museum there was a lot of room for textiles, rows and rows of them. And I loved there was so much on Kanga's! Next to a big display, a video was playing explaining how Kanga's travelled from India, to East Africa, to Spain, and other European countries. I know only a little about the history of Kanga, but it seems like an intertwined one, just as the history of Wax Prints, I would love to learn more about it in the near future.
Highlight of the day for me were definitely the three Batiks in the small display about Australia. After learning about the Batiks by Emily Kame Kngwarreye and her Utopia Batik group, I am fascinated by it. These Batiks are from another group of Aboriginal women at the Ernabella Arts in Pukatja in South Australia. I love how they use the Javanese Batik technique to create their own unique style in motifs and colours! Would love to make a journey to Batik down under! 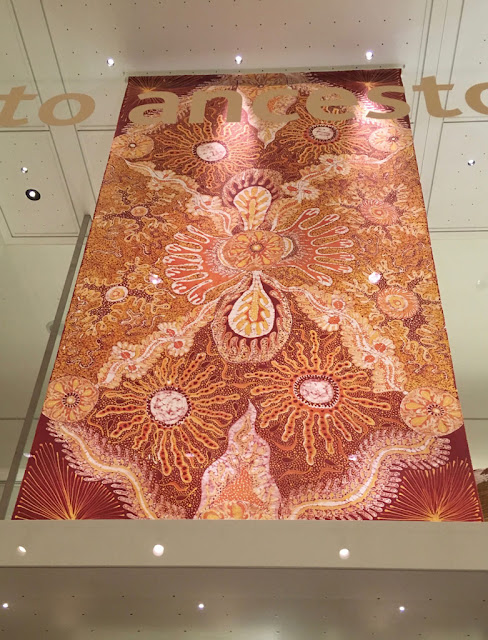 Batiks from Australia on display at The British Museum 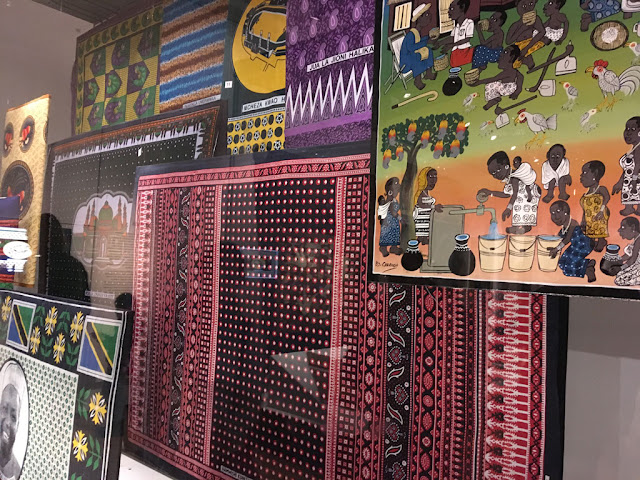 Kanga's from East Africa on display at the British Museum

After the British Museum, we went to Liberty. After finding a small sampler-booklet of 'Liberty & CO, East India House' in the travel-journal of a cotton-printers son from 1884, I just needed to learn more about it.
Liberty is kinda the "Oilily of England". Only one big difference; Oilily got their inspiration from Dutch traditional wear and therefor from Indian Chintz, in 1963. Liberty was actually selling Chintz and imitations of Chintz from 1875!!!

Arthur Lasenby Liberty was born in Chesham, Buckinghamshire, in 1843. He was employed by Messrs Farmer and Rogers in Regent Street in 1862, the year of the International Exhibition. By 1874, inspired by his 10 years of service, he decided to start a business of his own, which he did the next year.
With a £2,000 loan from his future father-in-law, he accepted the lease of half a shop at 218a Regent Street with three staff members.

The shop opened during 1875 selling ornaments, fabric and objets d'art from Japan and the East. Within eighteen months, he had repaid the loan and acquired the second half of 218 Regent Street. As the business grew, neighbouring properties were bought and added.[2]

In 1884, he introduced the costume department, directed by Edward William Godwin (1833–86), a distinguished architect and a founding member of the Costume Society. He and Arthur Liberty created in-house apparel to challenge the fashions of Paris.

In 1885, 142–144 Regent Street was acquired and housed the ever-increasing demand for carpets and furniture. The basement was named the Eastern Bazaar, and it was the vending place for what was described as "decorative furnishing objects". He named the property Chesham House, after the place in which he grew up. The store became the most fashionable place to shop in London, and Liberty fabrics were used for both clothing and furnishings. Some of its clientele were exotic,[clarification needed] and included famous Pre-Raphaelite artists.

In November 1885, Liberty brought forty-two villagers from India to stage a living village of Indian artisans. Liberty's specialised in Oriental goods, in particular imported Indian silks, and the aim of the display was to generate both publicity and sales for the store.

During the 1890s, Liberty built strong relationships with many English designers. Many of these designers, including Archibald Knox, practised the artistic styles known as Arts and Crafts and Art Nouveau, and Liberty helped develop Art Nouveau through his encouragement of such designers. The company became associated with this new style, to the extent that in Italy, Art Nouveau became known as the Stile Liberty, after the London shop.

The Department store of Liberty is still very much there, in the center of London. It is an amazingly weird building with Timber framing. Inside are impressive wooden ornaments, glazed tiles, paintings on the ceilings and piles of textiles. It was for me so interesting to see, this relic of Colonial times, very much alive and well in downtown London. At the same time, how many shoppers actually know about this history? 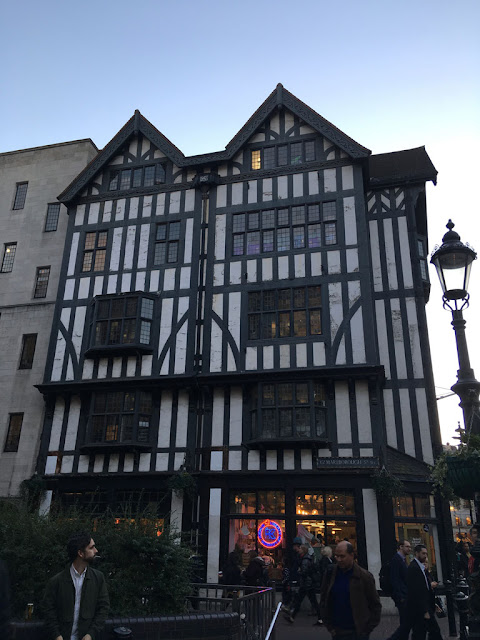 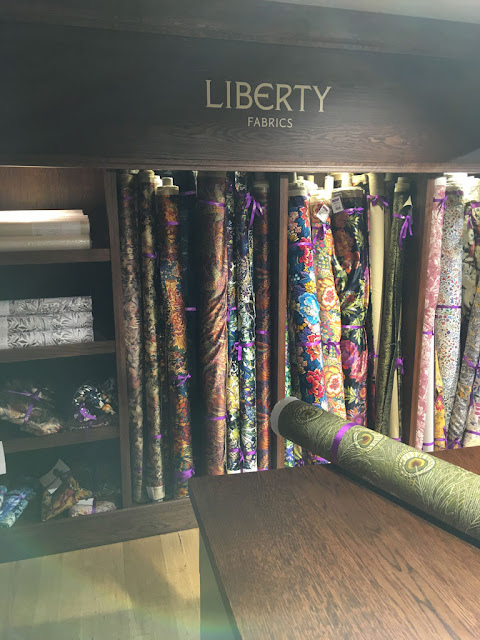 Liberty fabrics inside of the Liberty Department Store 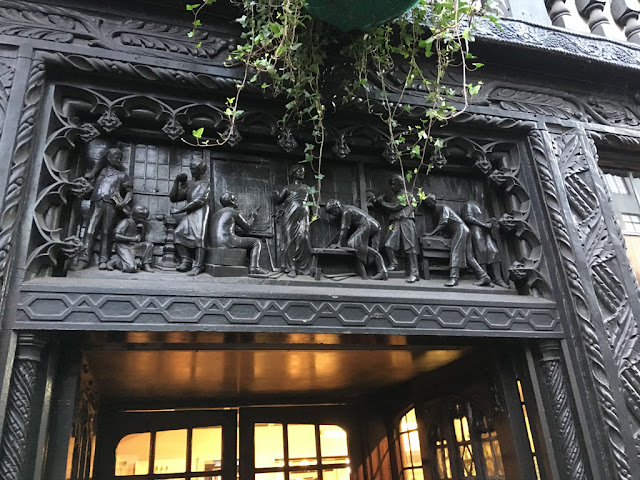 Above the entrance of the Liberty Department Store 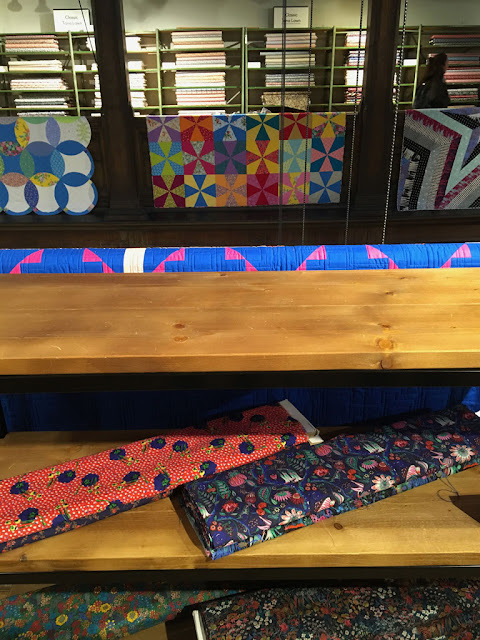 Inside the Liberty Department Store 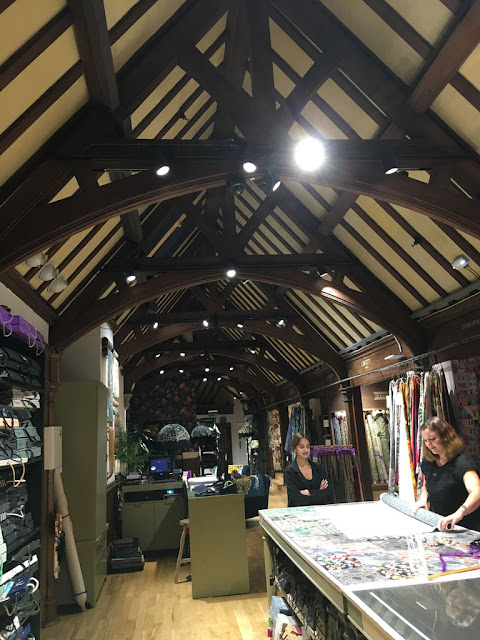 Inside the Liberty Department Store

Last stop for the first day, was the Open Studio at the V&A of the new artist in residence, Bridget Harvey! It was so great to actually be able to visit her and get an introduction on her amazing project. She will be looking at the V&A collection from a 'mending-point-of-view' and create new work from that the next upcoming 8 months. How lucky she is, and how deserved! Looking forward seeing what she makes, creates and repairs! 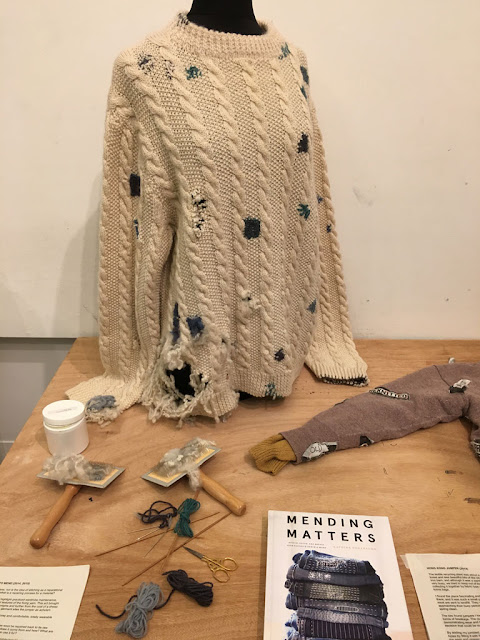 Introduction on Bridget Harvey's residency at the V&A


If you can’t take pictures at the wonderful ‘Frida Kahlo: Making Her Self Up’ exhibition at the @vamuseum, you just share some other awesome things💕I enjoyed the exhibition so much; it was truly a complete picture they painted of her and I loved everything about it💕So happy I can share this with @suryadewit, @koendewit and @_krean_ , feeling lucky😘#inspiredbyfrida #victoriaandalbertmuseum #fridakahlo #boomerang #baobabbatik #prettythings #family
A post shared by Sabine Bolk (@sabinebolk) on Oct 28, 2018 at 4:10am PDT


The Second Day was all about the exhibition 'Frida Kahlo: Making Herself Up' at the V&A. I am preparing a post about it for Modemuze, so more on that in the near future!
It was so good and I was so happy I could see it! I felt so lucky and so close to her. They made it so well, great job!
After the exhibition we were all so filled up with emotions and images, we just eat and sit and talked. We continued a little later and enjoyed the V&A some more. I believe you can go 3 days to the V&A and don't get bored. Or at least thats how I feel about it. I wish I could go there more often! 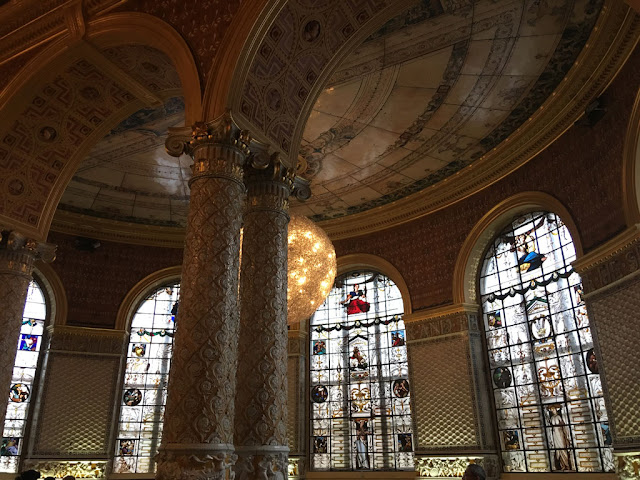 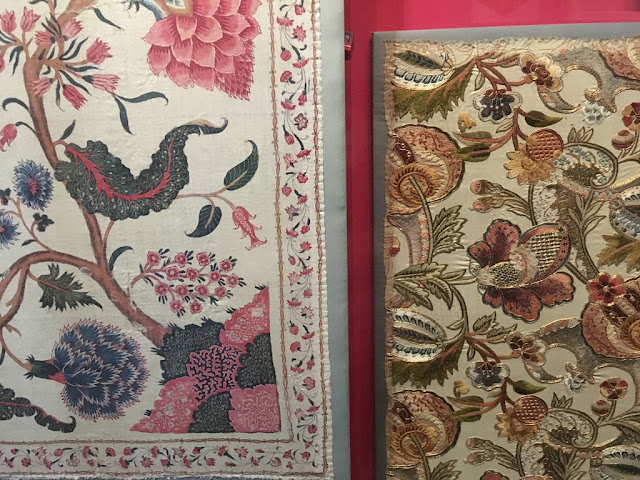 Indian textiles at the V&A


When everything that inspired the artist is in the same space as the works of that artist👩🏻‍🎨William Morris with his Arts & Crafts movement took inspiration from Medieval Art {Pre-Raphaelite}, next to textiles and other beautiful things from Japan, India and China😍So wonderful to step in this history for a moment and see all these things at the @vamuseum ❣️First; Dutch tapestries from 1500s, the stuff kings put in their drafty castles😲Then textiles from Japan & India and last a tiny corner of the museum café that was designed by William Morris😍 #victoriaandalbertmuseum #london #tapestry #unicorn #patterns #textiles
A post shared by Sabine Bolk (@sabinebolk) on Oct 28, 2018 at 2:30am PDT


The last full day was a mixture of muscle ache of dancing the whole night before and enjoying some more Art. We made a quick visit to Surya's Studio while enjoying the lovely Walthamstow neighbourhood. What a pretty part of London, no wonder William Morris got so much inspiration from it and how great that Surya's lives there!
Of course we needed to go to the William Morris Gallery also. This time it was the dot on the i. It is so interesting to see how William Morris is in the middle of this interwoven history and he was definitly in the center of this trip. He designed for Liberty & Co, he designed parts of the V&A interior, his was fascinated by Indian and Japanese Textiles and Art, by Medieval Tapestries and he loved Crafts. It was so great to spend the Sunday at this wonderful place, his Childhood home! 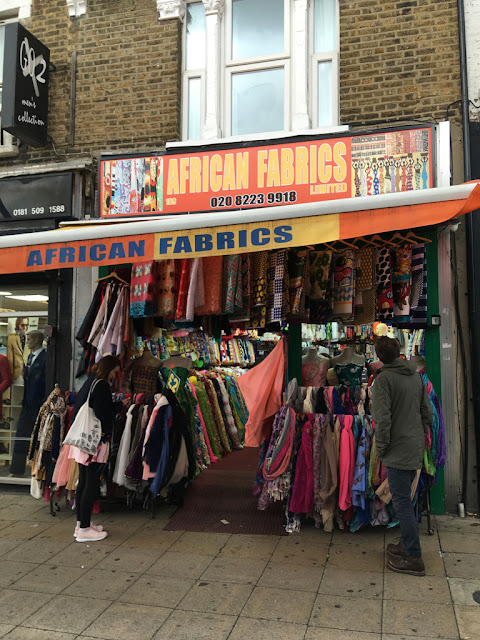 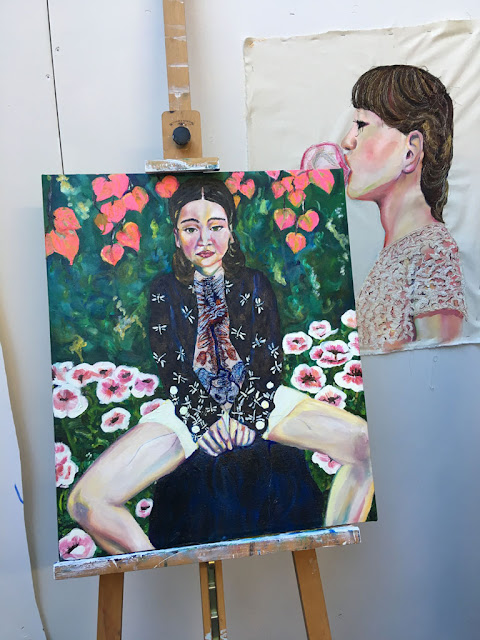 Surya's work at her studio 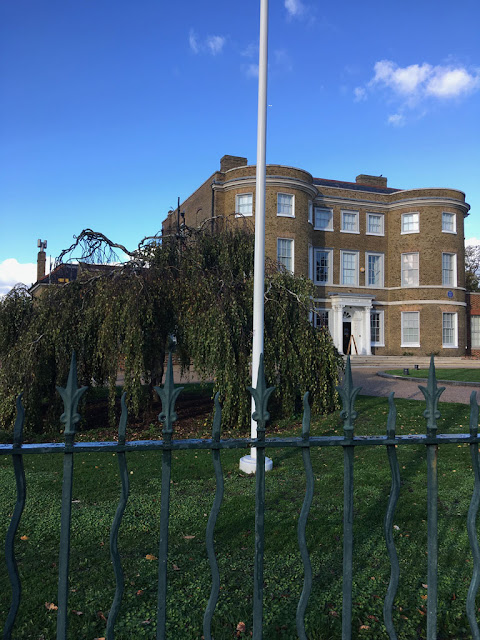 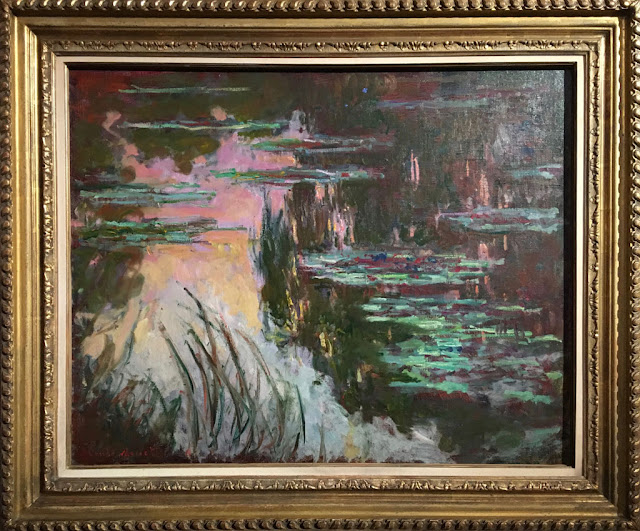 Waterlilies by Monet at the William Morris Gallery 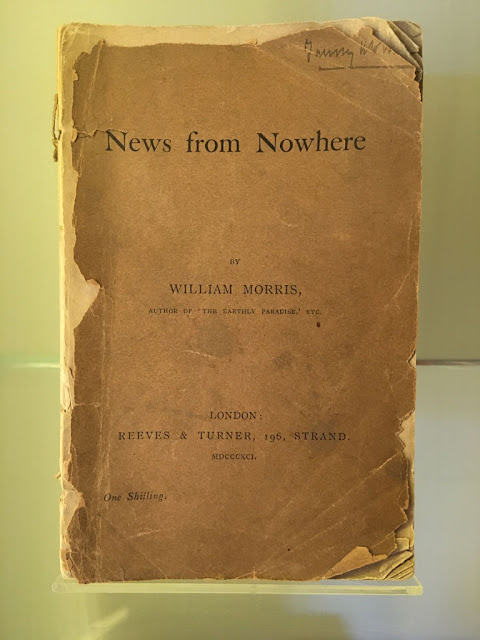 At the William Morris Gallery 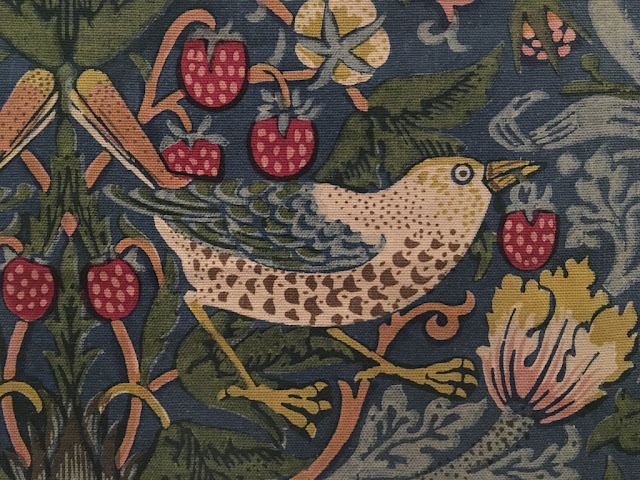 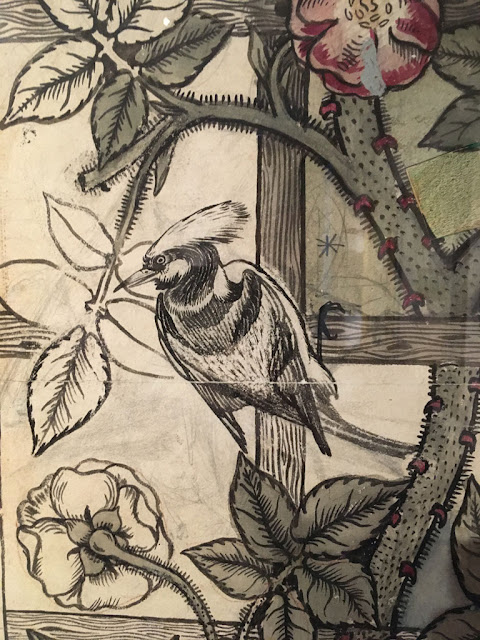 Sketch for a wall paper design
at the William Morris Gallery 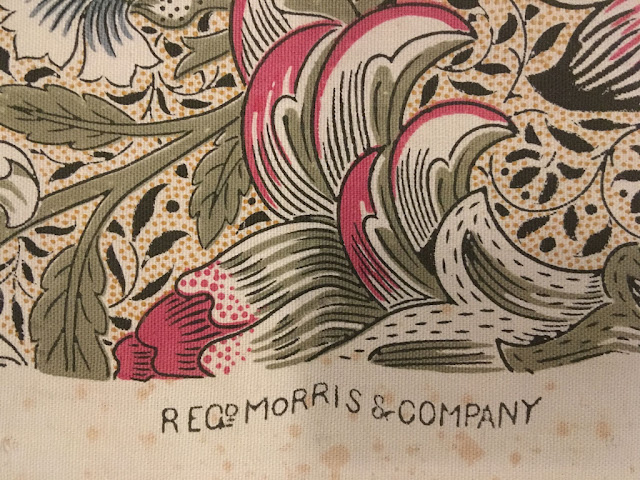 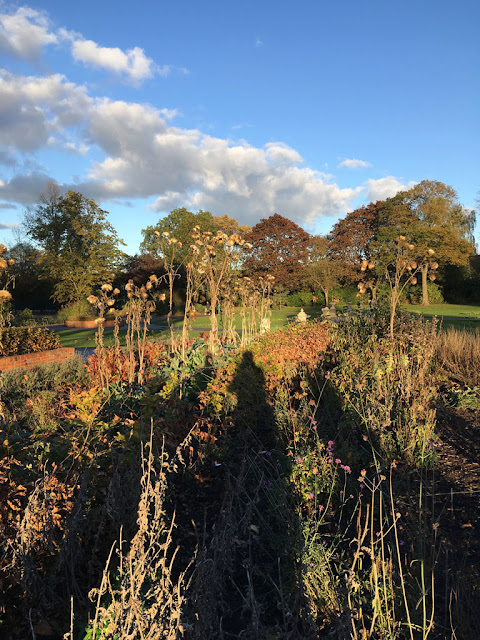 Garden of the William Morris Gallery