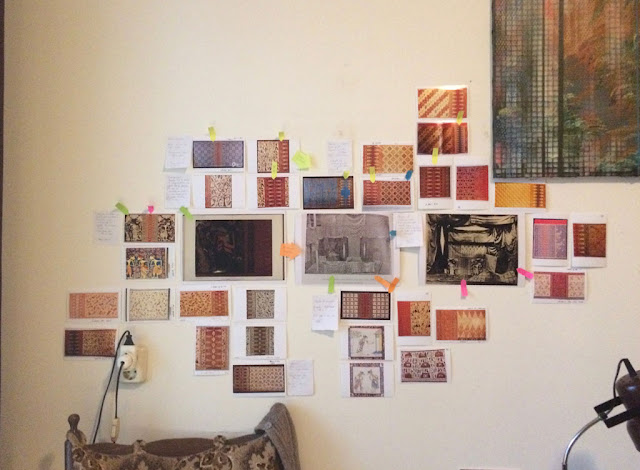 In the literature, some sources state that Batik entrepreneur Carolina Josephina von Franquemont was swept away in a landslide, while others state she died after a long illness. I became intrigued with this discrepancy in Batik history, which made me wonder about other existing literature we have accepted as fact, when there is still more research to be done. Talking with experts in the field; Batikmakers and researchers, it became clear to me that the history of how the Batik-style changed between 1850 and 1890 needed to be re-examined and re-told. Not by one person, or from one point of view, but as inclusive as possible. Including views of today’s makers with ideas from both sides, the Dutch and the Indonesian perspective.

With this project the goal is re-telling the history of the (Indo-)European influence on Batik between 1850 and 1890 on the North- coast of Java, Indonesia, together with Batikmakers, researchers, museums, collectors and Batik fans within a Post-colonialism framework. Answers are given in words and images to the following question: How was Batik influenced by Europe?
Can this influence truly be traced back to one or two individuals, Indo- Europese Batik entrepreneurs Carolina Josephina von Franquemont (1817-1867) and Catharina Carolina van Oosterom-Philips (1816-1877)? And what other factors played a role in this development? How is this evident in Batik designs from before 1890, from before Batiks were signed, and what can actually be considered as an (Indo-) European influence?
During the project what is collected in the Netherlands is connected to today’s Batikmakers on Java. In the form of a Summerschool for Batikmakers and with an open access online platform.


The project consist of three parts:
Part I - Research at RCMC, from June 2019 until June 2020
Part II - Exchange on Java - Re-telling the history, in October 2019
and (hopefully) Summer 2020 in collaboration with Museum Batik in Pekalongan,
Museum Tekstil in Jakarta and Indonesian Pluralisme Institute (IPI)
Part III - Sharing, throughout the project on an online-platform and in partnership
with Modemuze the project will be shared in a blogpost-series and with meet-ups


To create a base on which the re-telling is done, the research starts with collecting (digital) material from collections in the Netherlands and Indonesia; i.a. National Museum van Wereldculturen, Rijksmuseum, Textielmuseum Tilburg, KITLV, University Library Leiden, Vlisco archive, Museum Tekstil in Jakarta and Museum Batik in Pekalongan.
The research is done in the form of a Research Associate position at the Research Center for Material Culture (RCMC). With Francine Brinkgreve, Curator Insular Southeast Asia and Daan van Dartel, Curator Popular Culture and Fashion as my supervisors.

Batik has inspired me for 10 years now. Not just the technique, but the language of patterns, the philosophy of Batik. The last two years I have been fascinated by this particular history. A history from which the maker of today is far removed, yet they are intertwined with this history since the process of learning Batik is passed on from one generation to another. With this project I want to re-connect the makers to what is stored in depots with a Summerschool on Java and though the online- platform. At the same time this re-connecting functions as a re-telling, adding the story of contemporary makers to written history and replacing assumptions with facts. The last 10 years I researched Batik by myself. Luckily I have all this access to information from both sides, but I have come to a point where I need institutional support to make the next step, in getting this project to the level it needs to be. So I am very happy I can collaborate and work with RCMC, Modemuze, Museum Tekstil, Museum Batik and IPI. I see myself as the initiator of this project. Together with the collaborations here and on Java, I believe the re-telling can be done in a way not done before and thus creating a fuller truth.


The last 2,5 year I have been preparing this project, first everything went really slow and eventually really fast. I am still lacking funding for this project and also need to work out when I can share what where. I am building a new website that will function as an online-platform, just started as a Research Associate and am preparing my return to Java for end of September. So many things are set in motion!

If this project resonates with you and you want to contribute to it, please contact me. Maybe I already reached out to you in these past years. Any research, thoughts and ideas on this topic are welcome. If you have a paper/thesis on this subject you would like to make available. Or if you have Batiks or family photos of people wearing Sarong and Kebaya from before 1900. This project is about sharing and making this history available, so looking forward to your stories! 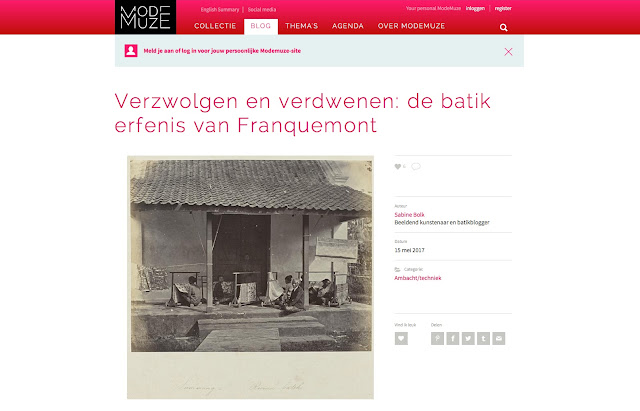 Read more:
In May 2017 my article about Carolina Josephina von Franquemont was published on Modemuze in Dutch 'Verzwolgen en verdwenen: de batik erfenis van Franquemont', English version on this blog 'What happened to Von Franquemont'