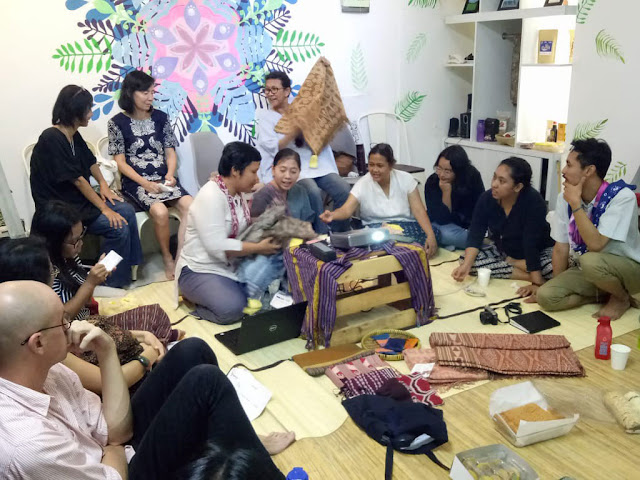 
During my last visit to Java, October 2019, I had many surprising encounters. Not all nice, but some very nice, so overall the balance was right.
For my first talk at Museum Tekstil in Jakarta, for which by far I was the most nervous, I got to must wonderful moderator, Nurdiyansah Dalidjo. He look so sharp in his white blouse on a loosely wrapped sarong. He addressed me in perfect English asking me all kinds of questions on my research.  Since I didn't really get much information on the event before, I had no idea who he was, but it was such a warm and interesting welcome. We talked short about what we both did and agreed on exchanging our activities on our platforms, since sharing is the best way of getting our messages across. So meet Diyan of Kain Kita & Penjelajah Rempah. 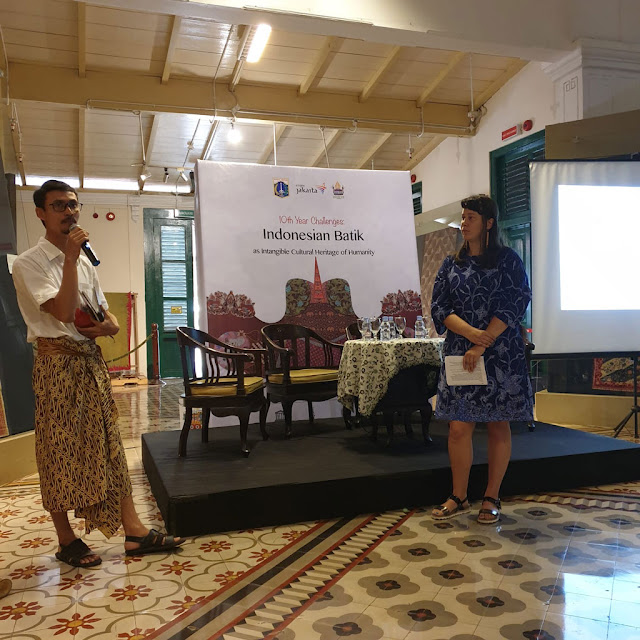 
Nurdiyansah (Diyan) is an interdisciplinary writer, researcher, and activist who seeks to memorialise the role of spices as the ingredients that fueled the revolution in Indonesia. He started his career as a journalist and has a master’s degree in tourism, and has over 10 years’ experience in development issues. He is currently based in Jakarta and spends his time exploring colonial histories through food and textiles in Indonesia.

Following Diyan on Social Media I got more and more inspired by what he shared. A post on his Instagram showed him posing casually in a woven textile from the weavers from Rendu, Nusa Tenggara Timur, part of the Lesser Sunda Islands. He start the post with the word "Power Dressing!", he continuing to explain that wearing fabrics made by Indigenous women is a way of connecting to their struggle, a way of addressing it. That their struggle of functioning in a world dominated by patriarchy, is closely related to Diyan's own position in the Indonesian world dominated by heteronormativity.
"I define myself as queer. I was born and raised in Jakarta, but both my parents are from Yogyakarta - a region in Indonesia known for its Batik. As a city kid, kain {textiles in Bahasa Indonesia} is not part of our daily lives. Many people in the metropolitan especially the youth labels kain as something traditional, old, complicated to wear and just not modern thing.... Kain as a tradition is also downgraded by the Developmentalism that is considered important in Jakarta. Traditional textiles get marginalised, alienated.... until now the rights of Indigenous Peoples in Indonesia are still not acknowledged." Diyan wrote me.
When following recent developments in Indonesia there doesn't seem much improvement in this acknowledge of the rights of Indigenous people, nor for the rights of the LGBTQ+ community. I was on Java when the student demonstrations were held, and it seemed their protest were in vain (read a little more here & here).
"Kain inspired me not to give up. Kain become a symbol from which I can show my to support women. By buying kain I can support these women economically. And with Kain Kita I can share their story."
Diyan, together with Cassandra Grant, started Kain Kita, to share the power of Indonesian textile through online articles, events and more. They share stories from makers and hope to inspire the youth to buy kain directly from the makers.
Through their #WomenAreHeroes series, Kain Kita introduce women from across Indonesia who use kain as a means to reclaim their rights and authority over their selves and bodies, cultural identity, and their traditional territories.
For example the story of Mama Aleta. Aleta Kornelia Ba’un (more commonly known as Mama Aleta) is an indigenous woman from the Molo community in East Nusa Tenggara (NTT). Her fame as an indigenous leader and activist has spread across Indonesia and internationally, largely due to her success in staging weaving protests against mining companies and preventing the destruction of her community’s sacred lands. Their indigenous land is the key to their identity, the materials to weave their traditional textiles are all from here: the cotton and natural dyes. Mama Aleta managed to bring together 150 women, while being threatened violently, to spent a year sitting on the marble rocks at the quarry, quietly weaving their traditional fabrics in protest. A weaving occupation! 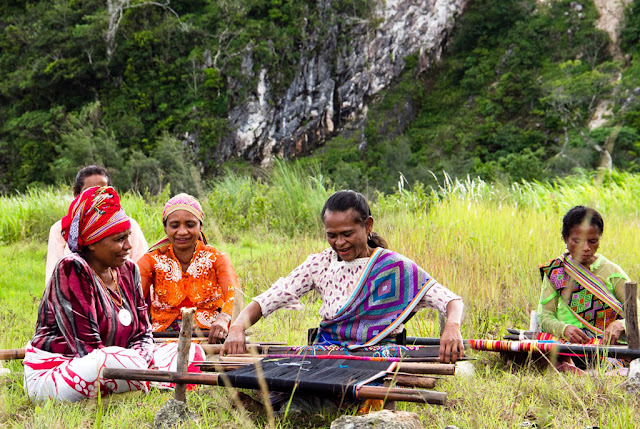 From the article 'Women Are Heroes, Stories of Resistance Behind the Beauty of Kain' 22 April 2019 by Kain Kita

"Meanwhile, kain representing the hybridity. The richness of our culture is not taken for granted. Kain recorded many things, our history and how we adopted and adjusted to different cultures.
So our kain not just as beautiful thing, but also a representation of our tolerance and shows how open we actually are to differences..."
The Indonesian saying and political campaign slogan "Bhineka Tunggal Ika",  meaning "unity in diversity" seems often a touristic cliche, but in the textiles of Indonesia this is still so clearly the case and it would be a pity if these values of Indonesia would be lost. 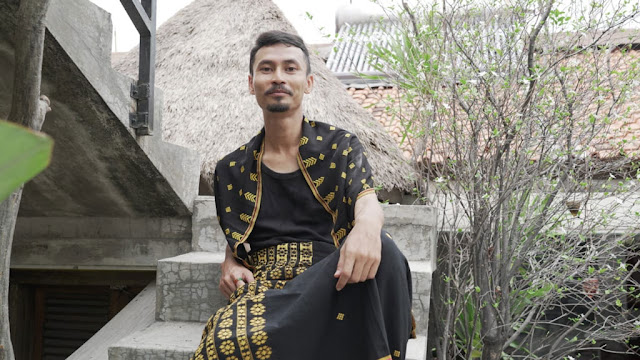 Of course I was curious to know if Diyan has a favourite among all the beautiful Indonesian textiles.
He explained that he likes Ikat, a common weaving technique for the Sunda-islands. He likes it because of its complexity; in the making with the backstrap-loom and the use of natural dyes.
The favoriete textile he owns is a kain tenun by the weavers in Rendu. The textile he wears in his 'Power Dressing' post. The weaving women of Rendu are forming their own protest. A dam is planned for their region, which will cause many issues for their land, like the mining did for the people of Molo. By buying their textiles, you can support these weavers in sustaining their activities in weaving, and protesting! What a beautiful story, and what a beautiful textile! Indeed, the power of dressing!

Kain Kita goals of promoting Indonesian textiles by showing their wearability and their strength is inspiring and I am very happy I met Diyan. It was not only nice to meet him, he was also a very good moderator. He helped me so well getting my story across, translating some extra things to the audience and just gave me the support I needed.
I am also happy to find that places as Museum Tekstil in Jakarta give us the opportunity to share our stories and give our platforms space in such an important institute, so also a special thanks to Ibu Ari.
Looking forward following Kain Kita's textile journey and if you want to read more, please check them out on their website 'Kain Kita', on Instagram & YouTube!