What to do with the Nutmeg batiks? 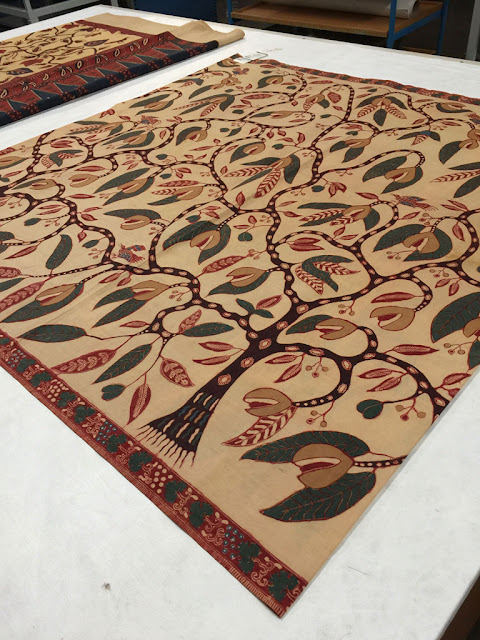 Nutmeg batik, TM-1585-4, next to TM-1585-3
in the depot of the Tropenmuseum,
both Collection NMvW
“What to do with the Nutmeg batiks?” has marked my agenda a couple of months now. This year we commemorate that is was 400 years ago,  to be precise on 6 May 1621 the genocide on the Banda islands occurred and on 8 May the massacre of the imprisoned Orang Kaya. JP Coen who led the “punishment expedition” has been questioned on his actions ever since and still we are discussion whether his statue and streetnames named after him should be removed from our public space (the answer is Yes! And #wegmetJPCoen). 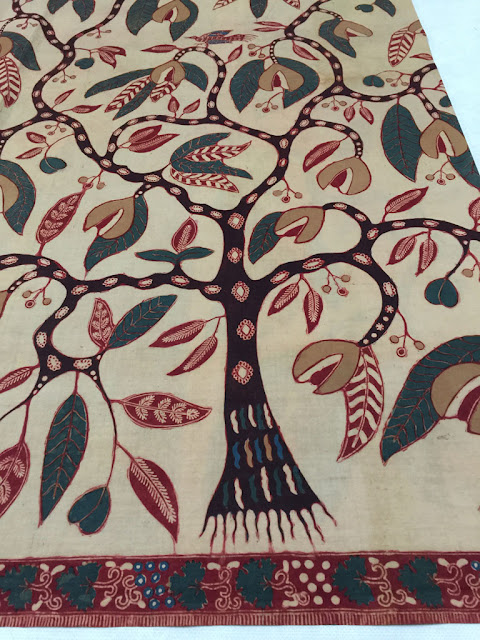 Nutmeg is not commonly used as a motif in textiles. Not in Batik, but also not in the earlier populair Chintz.
Chintz are block printed cotton fabrics from India that were often ordered by European with motifs fitting the European market in the 17th & 18th century . I remember standing in the V&A in London in 2014 in-front of a display and realising all the chintz had Papaver/Poppies on it. Opium is created from Papaver and formed an important product for the East India Company, the British VOC {our VOC also “dealed” in opium, a lot!}.
So it would be logical that other trading goods would make in onto cloths as a motif, especially cloths that are catering the wishes of the foreigners.
With spices this seemed not to be the case. Batik design started to changed half way through the 19the century. Batiks ordered by Europeans for the colonial exhibitions are often decorated with Zoo-animals, animals exotic for Java, cupids, as in fat angels, and a lot of wayang figures, which were before that time not common on Batik.
From all Batiks that survived I, till now, only found two with a Nutmeg motif on it. One that is seen as The Von Franquemont since half way the 20th century and one made as a goodbye-gift for the gouverneur-generaal of the Dutch East Indies from 1875 till 1881, Johan Wilhelm van Lansberge. This batik was later also, wrongly, attributed to Von Franquemont. 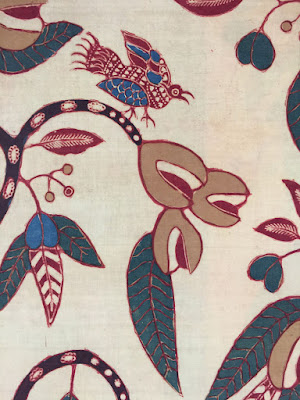 “De Nootmuskaat batik” as it is know in the Netherlands, The Nutmeg Batik, is part of a donation of no less than 196 objects. A large part consists of textiles of which a number of Batiks. Believed is they were worn by Adolphine Leonardina Wardenaar (1884-1942) the wife of P.H.Q.Bouman who made the donation in 1942. All batiks seem to be from a similar time, around 1900’s, but the Nutmeg got attributed to Von Franquemont in 1965 and is since then dated ‘1840-1867’. There is no additional provenance for this, but when it got published in a book in 1979 together with the spectacular, wrong, story about Von Franquemont’s passing, it has been shown/used as the example of what a Von Franquemont Batik looks like. 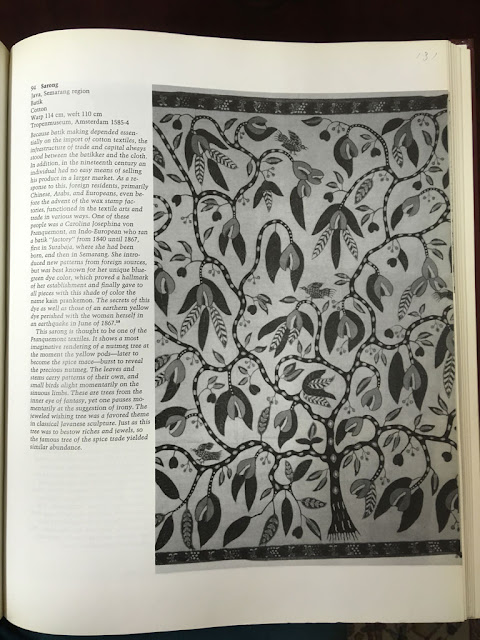 Page from the book 'Splendid Symbols. Textiles and Tradition in Indonesia'

I even found a copy of the famous Nutmeg Batik at the Vlisco archive. It is a very rough one-on-one copy, presumedly made for an exhibition to be sold in the giftshop, but never put in production. This Nutmeg wax print was donated in 1979, so was made before that date. 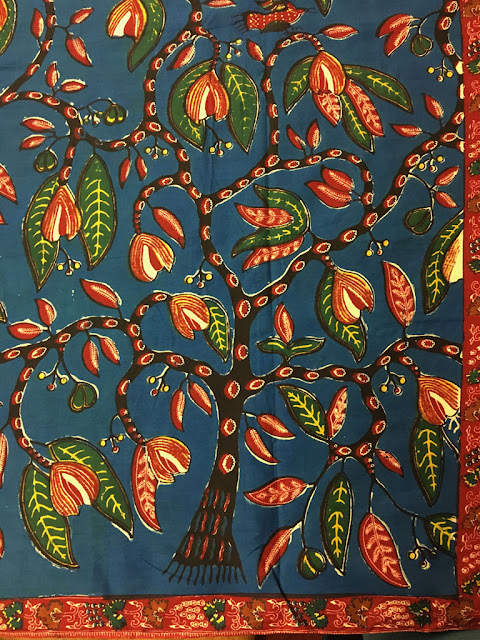 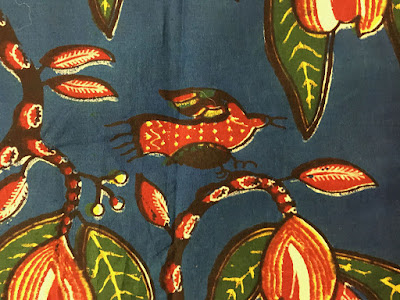 Detail of Nutmeg wax print from the Vlisco Archive 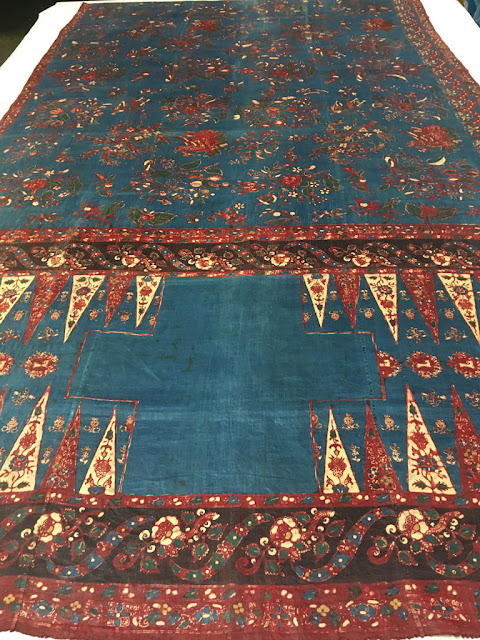 TM-H-91
in the depot of the Tropenmuseum,
both Collection NMvW
The second batik that has a nutmeg motif on is a piece donated by J.W. van Lansberge to the Koloniaal Museum in 1881. The batik is made on an unusual material, pine-apple fibre, also known as ‘rameh’, which was a very populair material on colonial exhibitions, but not really common in every day use on Java it seems. It now being used again to create Batik on! The large cloth, 1,5 x 2,5 meter almost, is designed as a Batik with a kepala, head, and Badan, body. In the kepala  the letter ‘L’ or ‘J’ and in in the badan between flowers, cupids on top of an H and an L, a mythical swan with a crown and nutmegs. 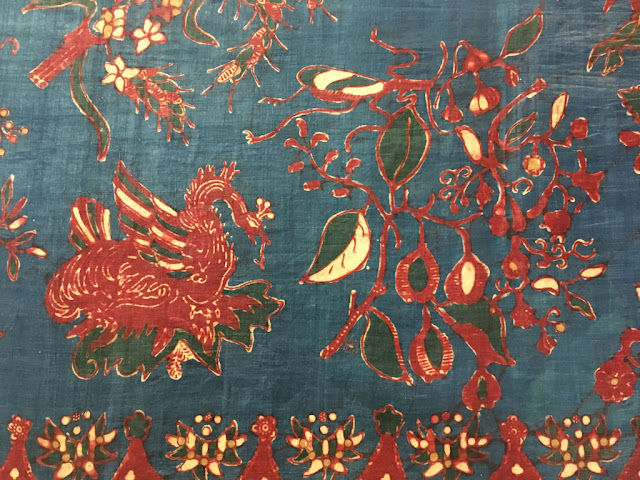 Detail of TM-H-91 with the crowned swan, the nutmeg and a part of the 'booh' 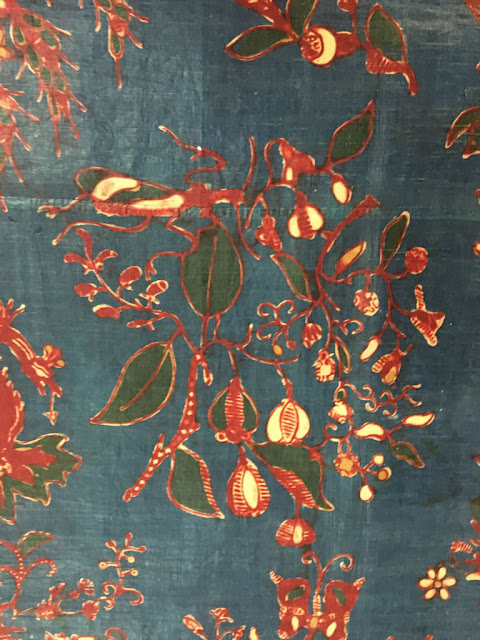 Nutmeg as a motif

For me it seemed odd there was nutmeg as a motif on these pieces and that it was almost proudly seen as the ultimate display of ‘European influence’ on Batik. “What to do with the Nutmeg batiks?” and their unclear attributions to Von Franquemont.
I first wanted to learn more about the history of Nutmeg, before making any further statements on these pieces.
I joined  the opening event of the online exhibition ‘From Cartography to Cookbooks: A web of Dutch Colonialism’ in January and there I saw speaker Dr. Joëlla van Donkersgoed wearing a blouse with a Nutmeg motif. She shared about her research on the Banda islands and her upcoming online ‘Banda 1621-2021 International roundtable series’. I contacted her afterwards about her shirt and the Batiks with nutmeg. She explained the fabric was sold in the Moluccas. The fabric was gifted to her and she let it made into a shirt. I later spotted the same fabric in photos of the making of the upcoming online exhibition ‘Pala – Nutmeg tales of Banda', used as a table cloth. Again this fabric was bought in the Moluccas. 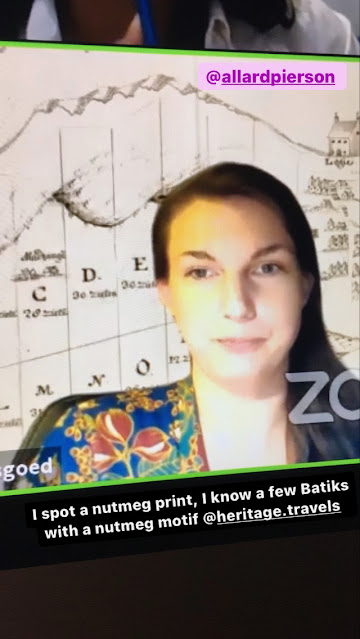 Screenshot I shared in my insta story 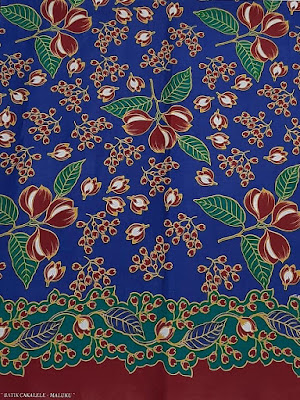 Joëlla send me a link to wear the fabrics were sold online.
This is from The Ambon Manise Shop 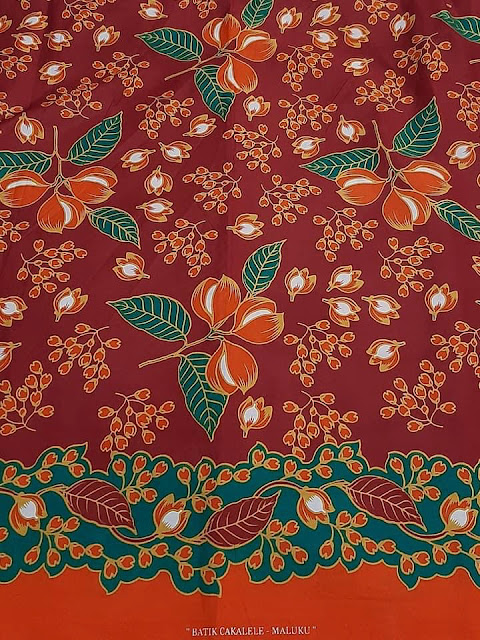 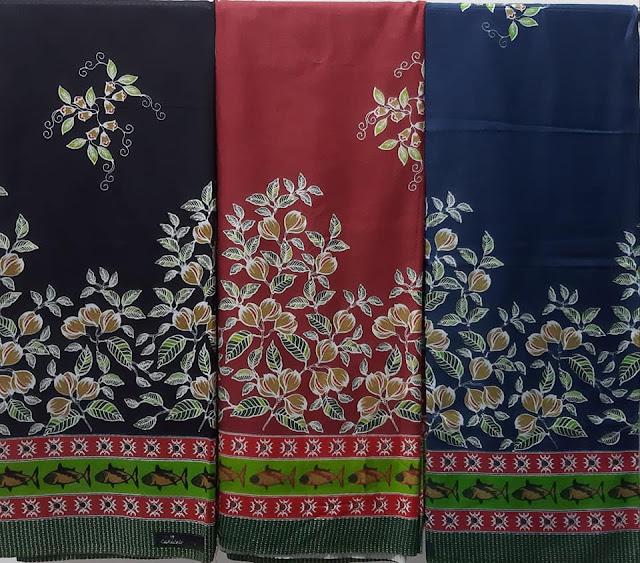 I attended the online 'Banda 1621-2021 International roundtable' and was inspired to learn more about how the history of the Banda islands was re-told, commemorated, how they used rituals and dances to heal from what occurred and strengthen their connection to their ancestors. If you haven't watched yet, you can watch it back on  you can watch them back on Youtube.
It seems the Nutmeg as a motif have been (re)claimed. However the Nutmeg motifs on the old Batiks seem to be made in a different light.
The Nutmeg Batik, TM-1585-4 is scheduled to be show in the upcoming exhibition 'De Erfenis', The inheritance, at the Tropenmuseum. I hope before it is put on display again a closer look will be taken at the provenance of this piece....

There is much to watch back, read and upcoming.
Please check the different programs this week as mentioned above, but also:

Exhibition ‘I love Banda’ by photographer Isabelle Boon, with an online opening on 6 May and a podcast series in collaboration with Beyond Walls

* All photos are taken by me, otherwise it is credited!

- Feel free to drop must watch/reads in the comments below -