Splendours of Malay World Textiles and more in KL 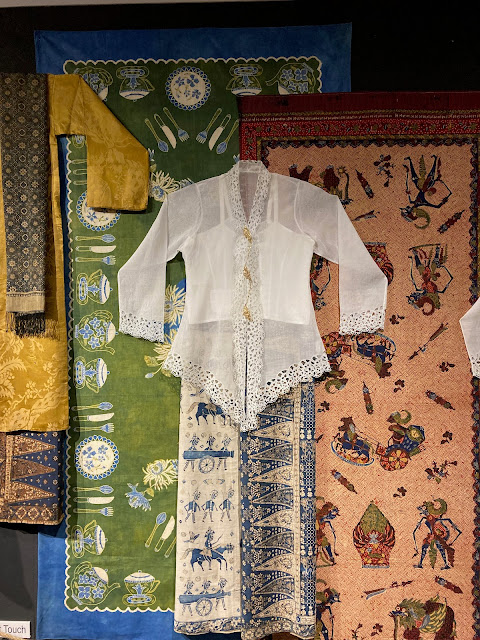 Together with John Ang, the new Vlisco wax print I brought in the display on Batik Besurek
in John's exhibition 'Splendours of Malay World Textiles' 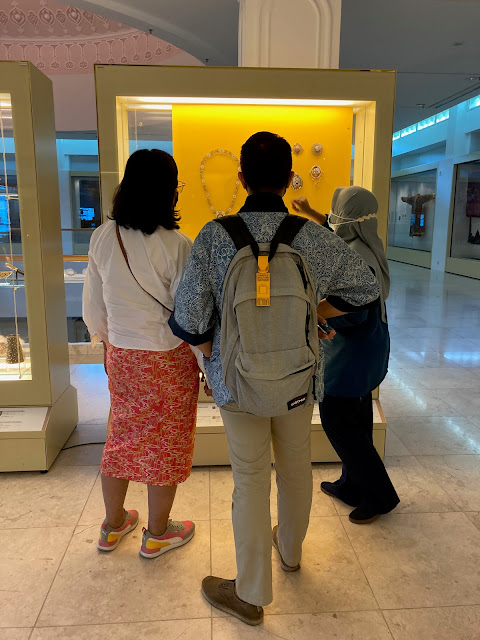 Maryam and Tony learning from curator Marina about jewellery
at Islamic Arts Museum Malaysia
Writing this from my hotel room in Jakarta where the jazz played in the hallway mixed with constant buzz from the AC in the room upstairs. Almost a week has passed since I had my last full day in Kuala Lumpur, Malaysia before traveling to Jakarta.
On Thursday it is the Batik Friday of Malaysia. Huh what? Friday’s in Indonesia are known as Batik Friday. The day everyone, mostly government employee have to, wear batik. The idea behind batik Friday’s was that more people had to wear batik, so more batik would be bought and therefor better protected. However most people do not wear Batik on Friday but go for the cheap mass-produced printed textiles, unfortunately…In Malaysia this day is on Thursday. I don’t know if people here were more real Batik or not, but we celebrated it by wearing batik and seeing Batik! 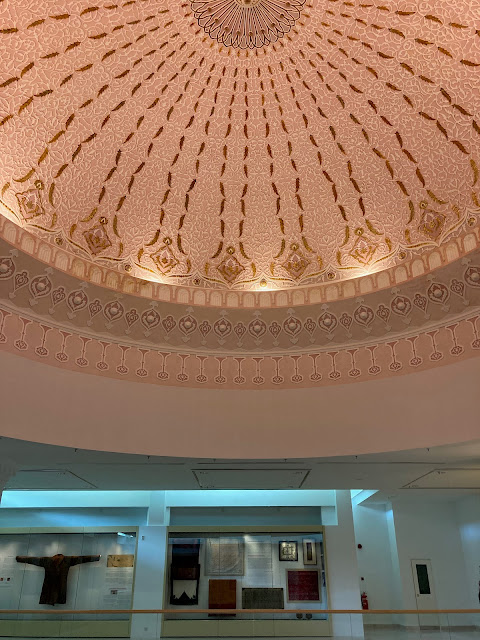 One of the domes in the Islamic Arts Museum Malaysia 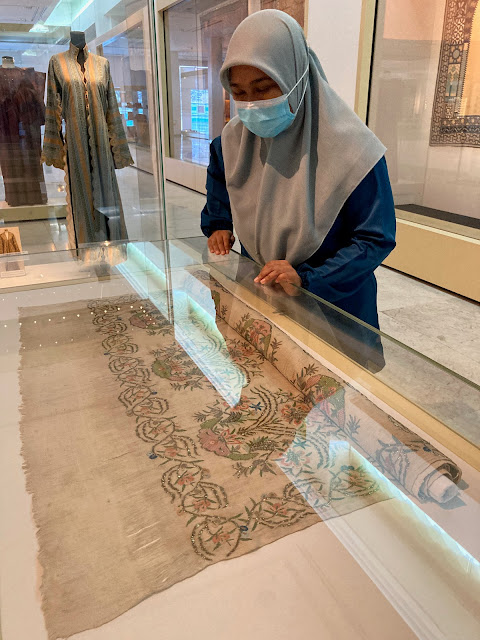 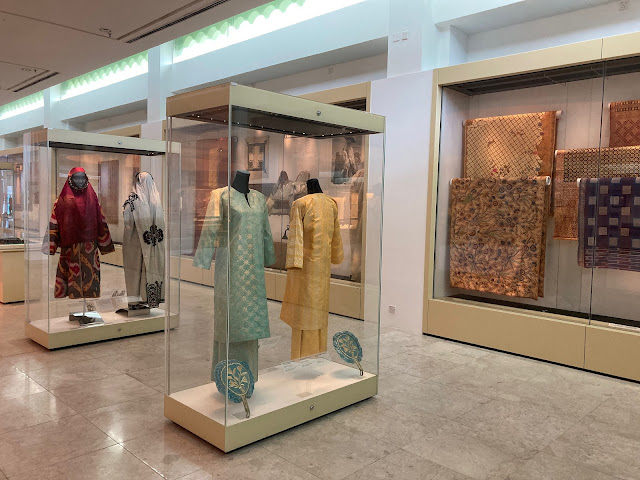 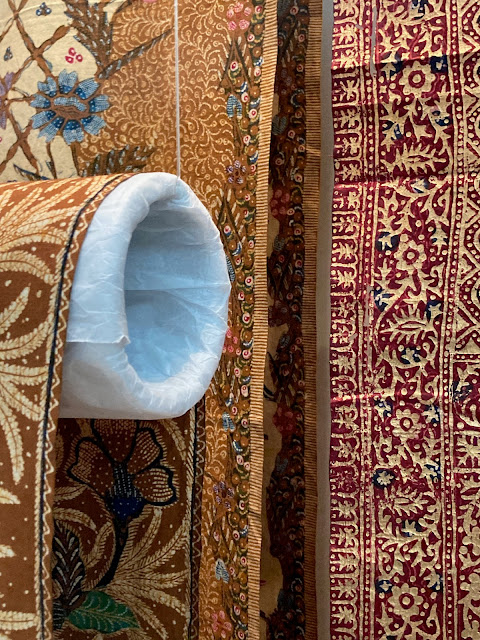 Detail of Batik and Telepuk 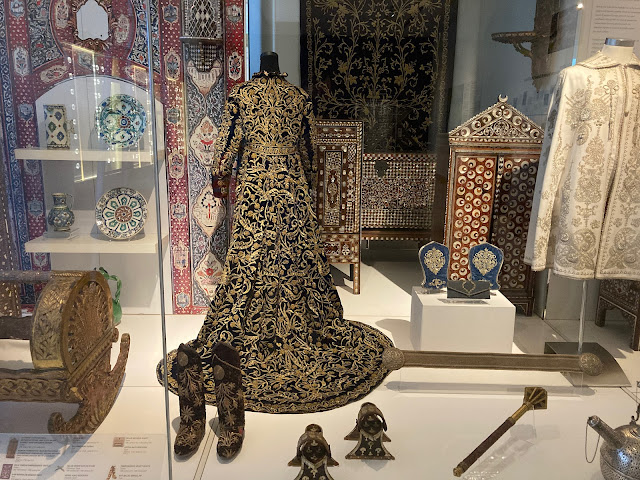 Textiles on display
at Islamic Arts Museum Malaysia
We started our day with a visit to the Islamic Arts Museum Malaysia. Maryam arranged for us to meet Curator Siti Marina Modh Maidin. Up on arrival the building is already spectacular and inside even more, with decorated domes and marble floors. Marina started with saying there wasn’t much Batik in their collection, to continue showing us all Batiks on display, which included amazing Batik Besurek pieces!
New ones have been collected and will be added in the exhibition they are working on behind the scenes for 2024.
The museum show Art, Crafts and Fashion from the Islamic world in all it diversity, beauty and development. It was refreshing and stunning to see how everything was displayed without pushing an agenda. We only saw part of this private run museum, but I definitely will revisit next time I am in KL! 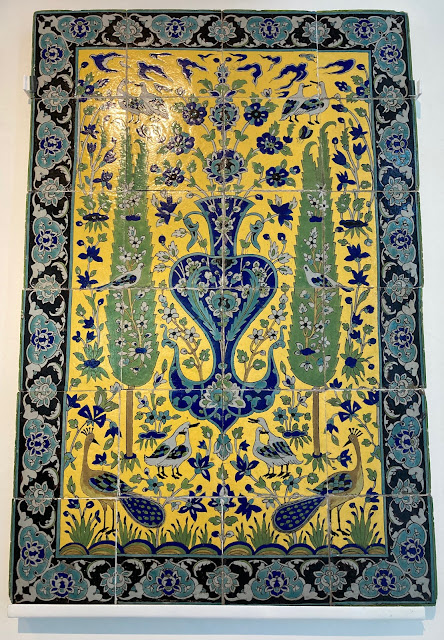 'Conference of the birds' 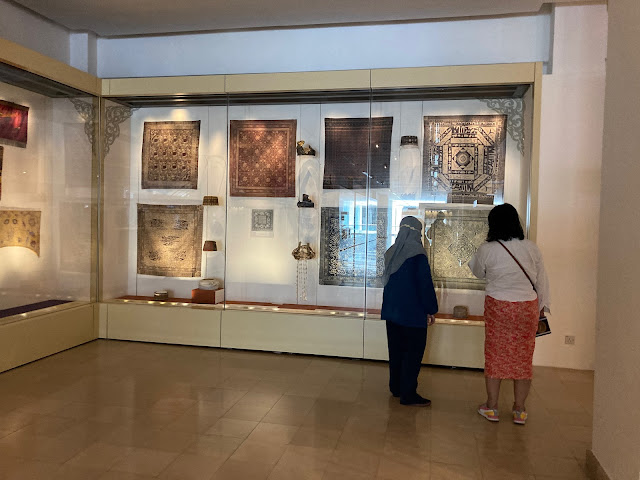 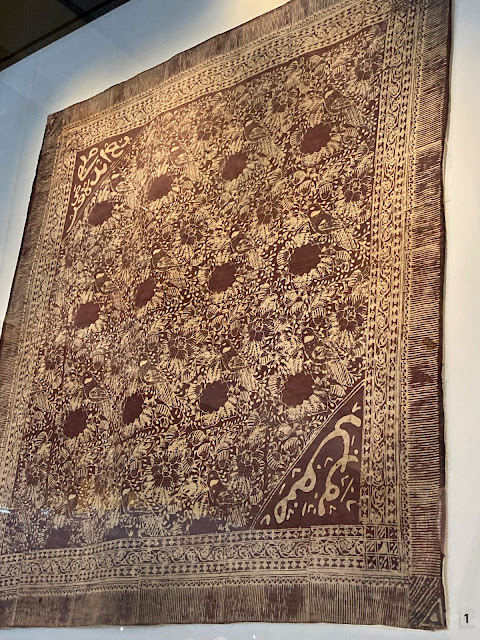 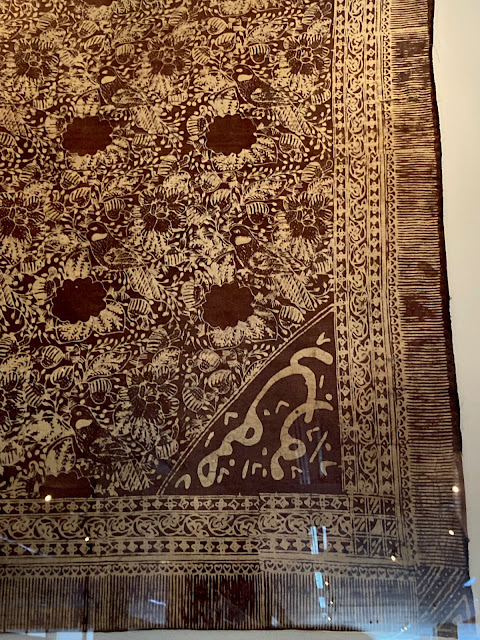 with Gelatik, rice bird motif, what a dream!
On display at Islamic Arts Museum Malaysia
Our next visit was to the exhibition ‘Splendours of Malay World Textiles’. Finally! The exhibition made by my dear friend John Ang. It was one of the main reasons for me to go to Malaysia. The talk in Singapore allowed me to travel here first, before continueing to Java, where I am now.
I saw my friend John Ang last in person in 2019. We stayed a weekend in Bangkok together, enjoying the exhibition of the batiks collected by the king, good food and many laughs.
Of course we were in contact regularly after through WA. Mostly discussing certain things John read somewhere, a textile he found or when I posted a recent find online. Whatsapp is nowadays the letters scholars use to send back in the day to each other ~ I do wonder how anyone can retrace our steps later with our messages through WA, Instagram DM’s, Messenger, the occasional email and phone call, on top of the many conversations in person… 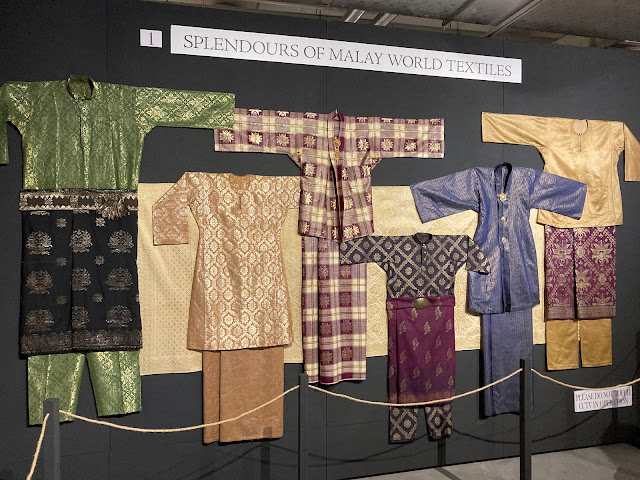 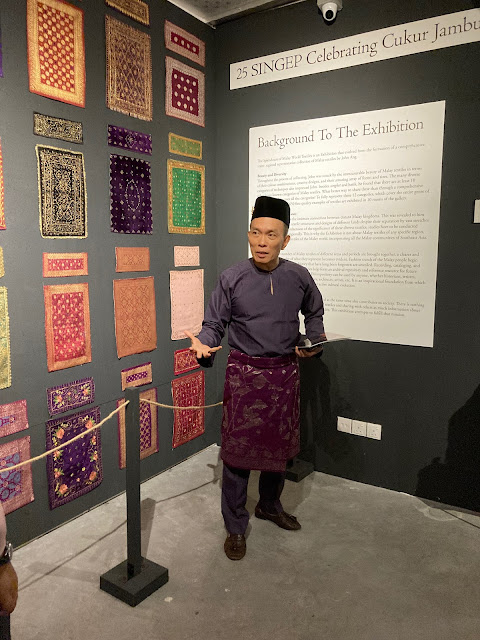 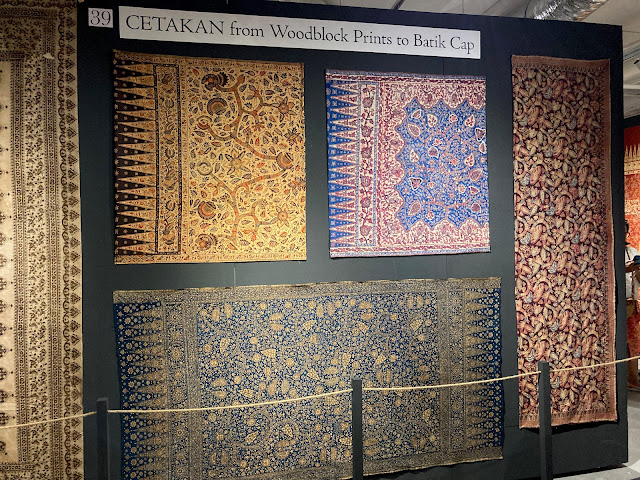 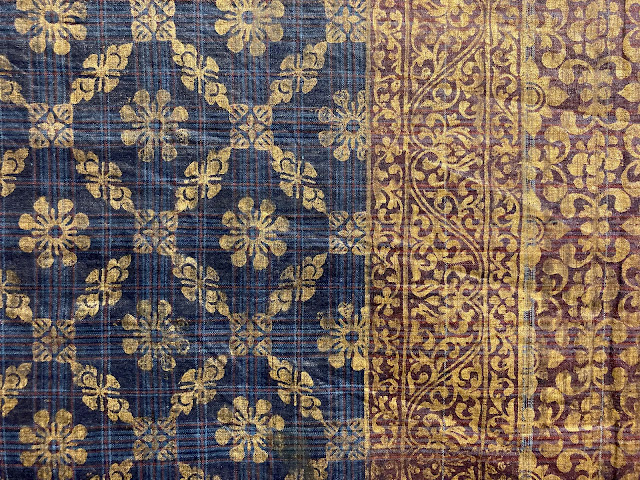 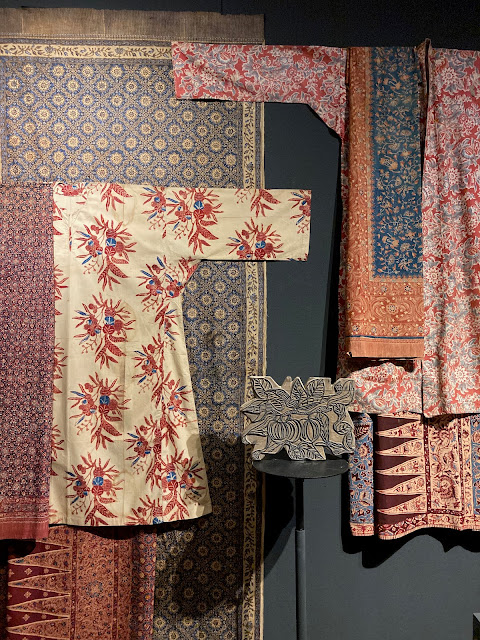 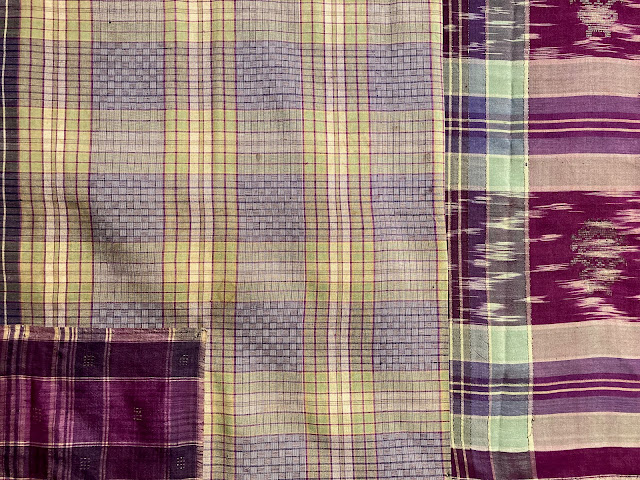 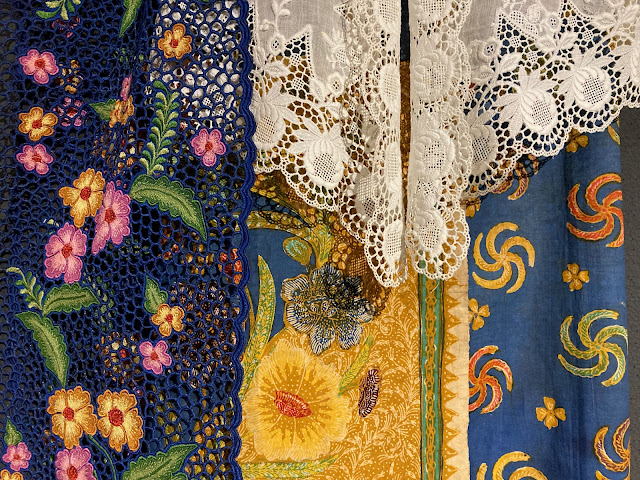 All the pieces are stunningly paired to make complete stories AND outfits!
Throughout the pandemic John was working day and night to make his exhibition. From his extensive collection he selected, I believe it is, 500 pieces to show in 12 categories the splendour of Malay textiles.
With zoom meetings John shared with us the different categories and the places these textiles are from. There are different opinions of what places and countries are part of the Malay world and there is even some controversy on the use of ‘Malay’ as a way of grouping the ‘Nusantara’, which I cannot explain in much depth, but lets say unity in diversity is a difficult concept to realise.
When the selection was made and the grouping in photo collages was done, a team of people build up the exhibition spending weeks ironing, hanging and pinning the carefully selected pieces. A labour of love!
Although I saw many photos during the process and from when it was opened in July, seeing the exhibition myself and getting to see the textiles up-close was an amazing experience. It is rear so many textiles are displayed, and these textiles are not behind glass, so you get to see all the details.
John invited us to join a tour he was giving to a group. Turned out it was for the Islamic Arts Museum we just went to. 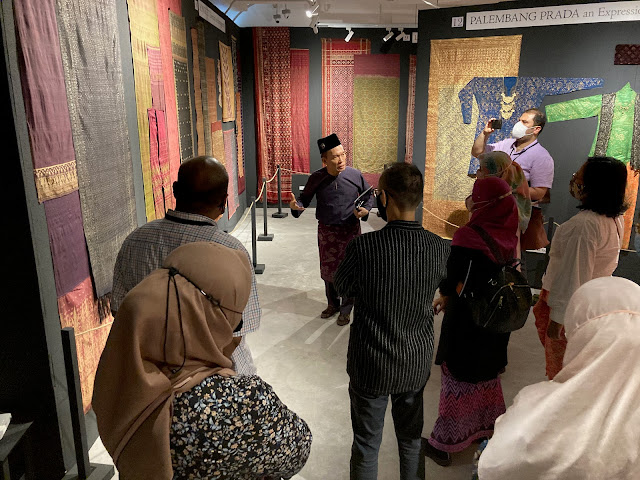 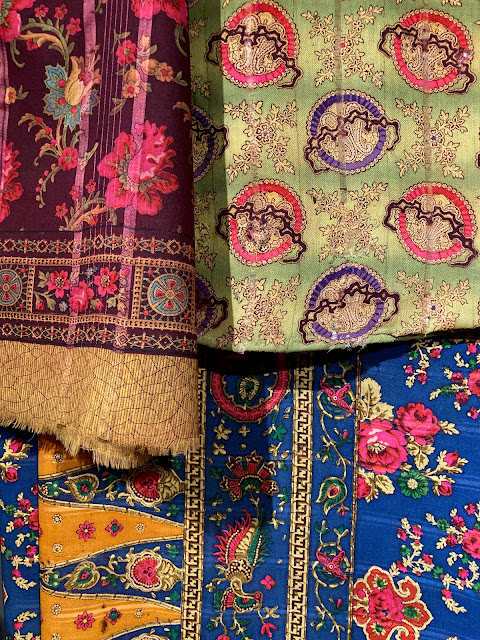 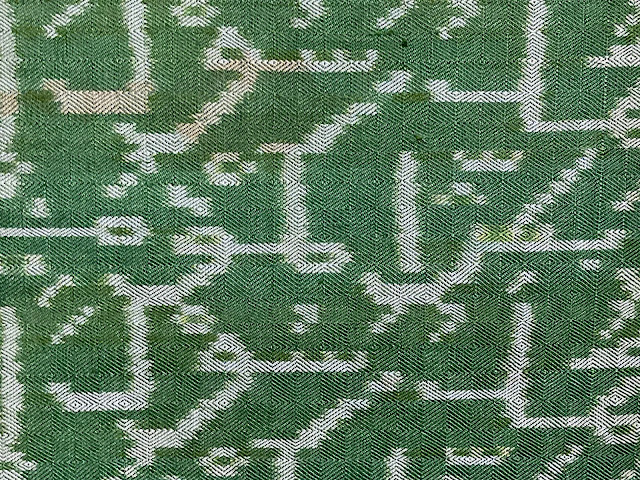 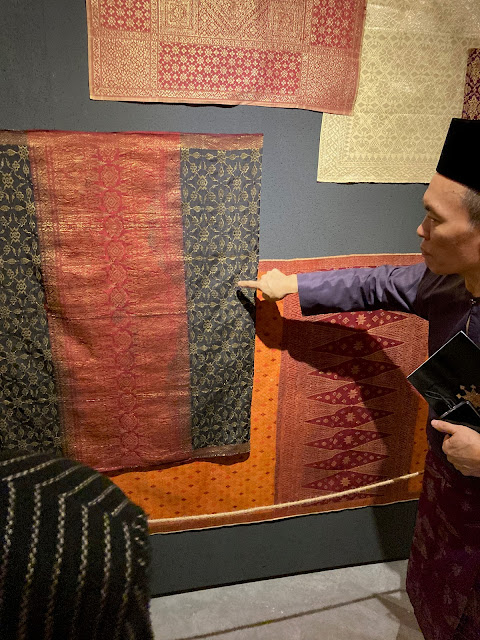 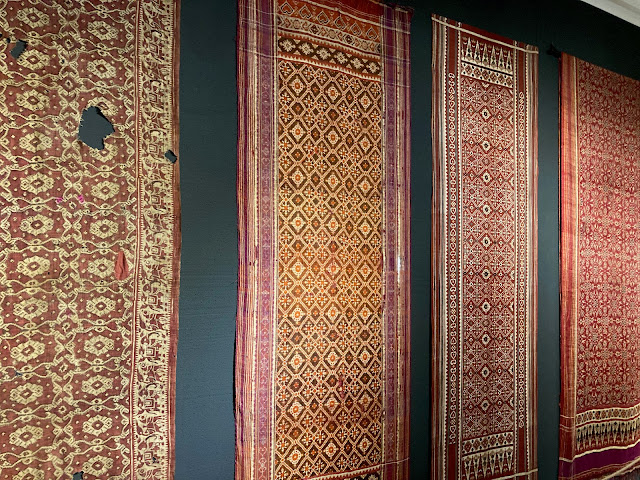 Patola's; originals woven in India, blocked printed ones
and a copy from The Netherlands made by De Kralingsche Katoenmaatschappij
in John's exhibition 'Splendours of Malay World Textiles 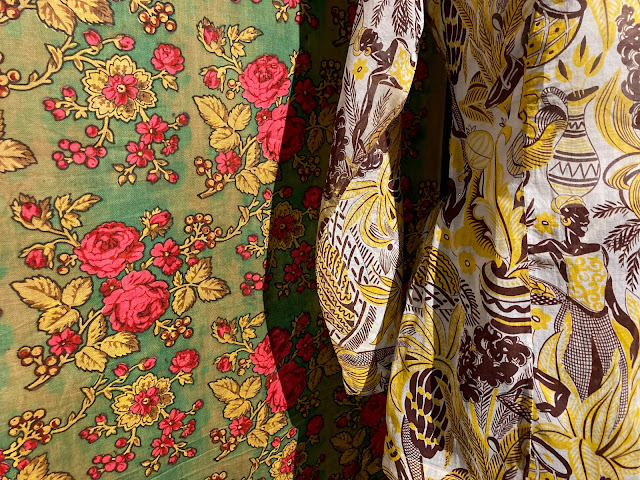 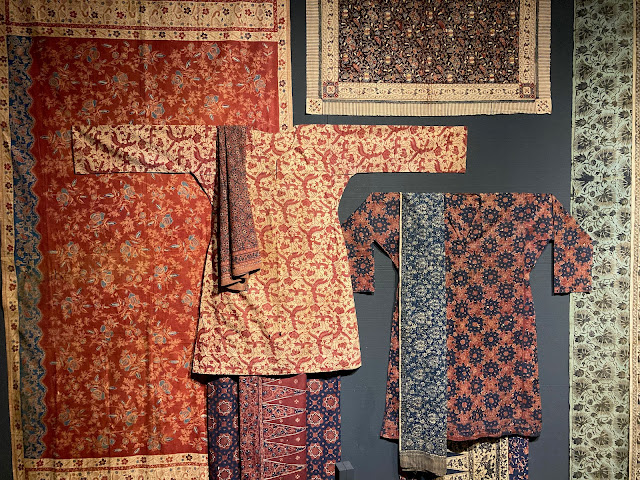 Batik Tulis, Woodblock prints and Batik Cap
in John's exhibition 'Splendours of Malay World Textiles
I was so happy that we could join a tour by John himself. The stories he shares on why certain pieces are grouped, the history they reveal and personal anecdotes make the exhibition come alive even more. You can book tours, so certainly do when you go to see the exhibition
Johns story, the marvelous display and all historical details really make me look forward to the book, the catalog, that will follow this exhibition even more!
When the group of the museum had to leave, and John called me “Sabine, we need you here”, for the last room of his exhibition. To my surprise the Vlisco imitation Besurek I got for John in the Summer of 2019 when he was in the Netherlands was featured here. John told how I told him how I found out Dutch imitations were made in the 19th century that now made their way into collections often mistaken to be real batik, like the one at ACM. 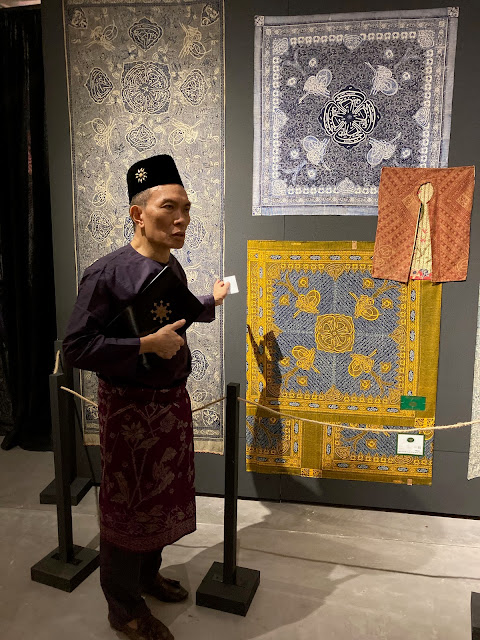 John Ang telling about our Batik Besurek discussions
After the tour, I was happy I could ask John to unwrap the present I brought him. Vlisco just released before my departure a new version of the imitation Besurek in purple decorated with rose gold (like prada). John showed it to everyone and we had to pose with it in the exhibition.
John invited us after tea for dinner. We went to this really stunning Peranakan Chinese restaurant. John was inviting someone in the car on the way there, I asked who will join us. And it was Thweep Ake Rittinapakorn, the Burmese textile researcher I got to meet in Bangkok for pies when I was with John there. Such a nice reunion, and it seems there are Dutch ~ Burmese textile histories we much explore further in the near future.
After dinner, John insisted on is seeing his home. We were all tire, but were super excited to see his home. It was almost midnight, so we would only look around quickly. John wanted me to also look at some Batiks. I said no we should sleep, but looked at a couple before going anyway since a no is luckily not accepted. Again amazing pieces that I tried to date as best as I could and wish to dive into further when I am back.

Me, Maryam and Tony enjoying some of John's Batik 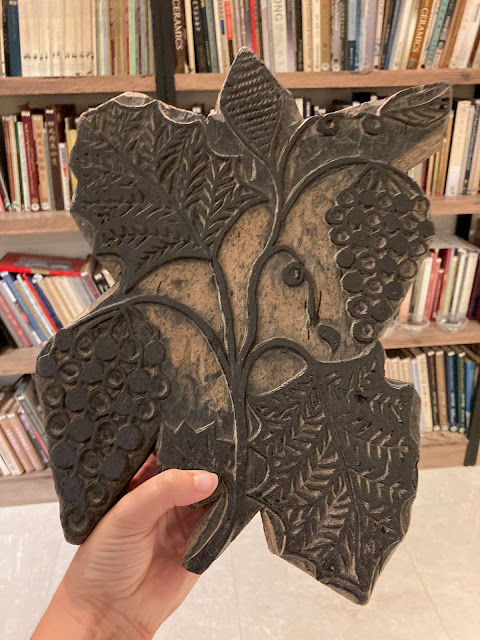 Looking forward to next time, when I will stay longer John, I promise.
Enjoy the lost month of your exhibition!
If you are near KL go see it, a must see for sure. If you are far, go see it too.
More info on www.johnang.com.my