Something else, biological fashion by Ami Goodheart of SOTO Productions

Wrote a short post called "Even iets anders, Bio-fashion door verschillende ontwerpers" (Something else, biological fashion by different designers) about a similar subject in December 2009. Now I came across this great example. 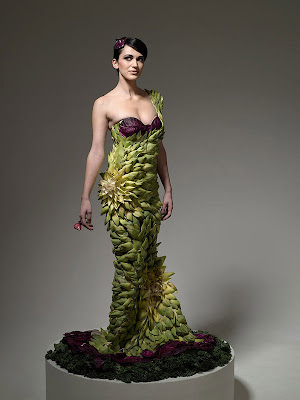 "Each model's clothing in the series was made entirely of real food and depicts a meal that the person was craving. This project was shot in January of 2009 (pre Lady Gaga). 15 designers, led by Ami Goodheart of SOTO Productions, were involved and each garment took hours to cook, create and assemble. The artichoke gown was designed by Daniel Feld and Wesley Nault of Project Runway fame. It took over 6 hours to finish (the model stood the entire time while they attached each, individual leaf)."

I think the idea behind this work is very good. For myself I'm more interested in the way they use these materials. In the earlier post about bio-fashion, the designers used flowers and leaves to make an ecofriendly fashion-show. It nice to see these temporary materials being used in such a positive way. Because I work with rice (and lentils etc), a lot of people start about the hunger in the world when they see my work. For me the rice is purely a (beautiful) material, like some artists use paint or clay. Sometimes I do use the fact that it's food, but always in a way that the temporality is emphasized. So I think the dresses, pants & shirts would have been stronger if it wasn't about their hunger, but about their favorite food.

Link:
"Hunger Pains" led by Ami Goodheart of SOTO Productions
"Even iets anders, Bio-fashion door verschillende ontwerpers" by me
(Something else, biological fashion by different designers)