Before we went to bed, I said "What if all patterns come from Africa?". Meaning that if all patterns have a source and if that source can be traced back to one, is it then the same location as where men originated from?
The next morning Koen woke me up with the words "There is a great article in the newspaper today". I went downstairs and read the head of the article.  "Oldest Cave Art found in Indonesia".*
The next hours I spend looking up Rock Art and found some pretty interesting stuff and went to get my own copy of the Nature journal, which turned out to be quite the challenge living in Breda...

We are all familiar with the Graffiti prehistorical style, hand outlines with red ocher on cave walls. Till now it was the common believe that these paintings, the hands and of all kinds of animals  mostly being hunted, were only found in Europe. Or at least that these ones were the oldest and therefor the source. Well that believe is officially turned upside down! 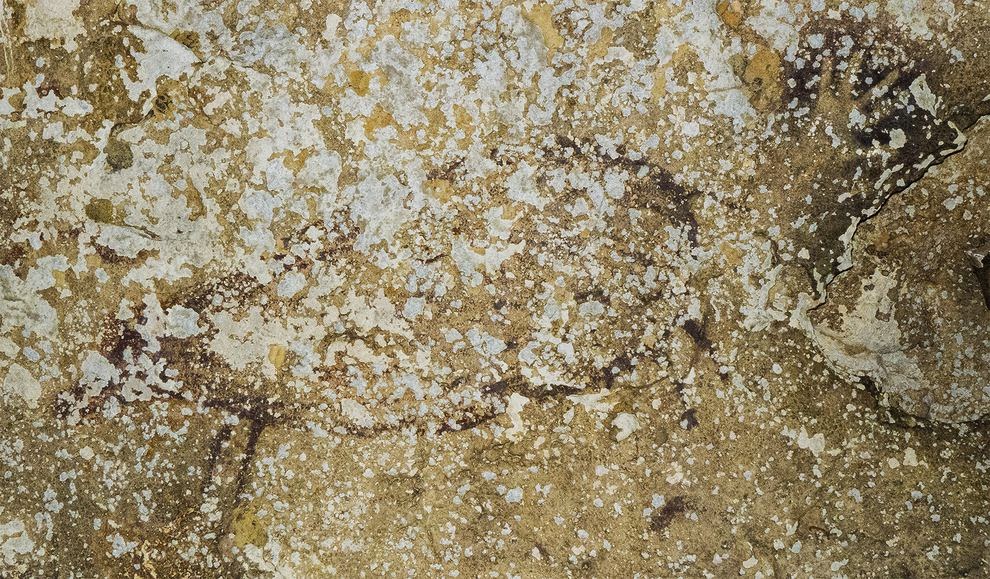 In the Dutch media they were writing about a painting of a pig. Food is always a strong motivator in (folk)art, but I wonder if the pig-deer, the Babirusa had also a more spiritual meaning.
This 'horned pig' is mentioned in notes by Alfred Russel Wallace.** He writes about Sulawesi, were this Rock Art is found, after describing the lack of knowledge they have on the botany of 'Celebes': Of its zoology we have much more knowledge, and we find that its animals are, considering its position in the very centre of the archipelago, wonderfully peculiar. Taking first its mammalia, we find that Celebes differs broadly from Borneo and Java in having no tailed monkeys, no insectivora, no feline or canine animals, no elephant, rhinoceros, or tapir. It has only five large, and eleven or twelve small terrestrial quadrupeds; the former are:— 1, A large black tailless baboon or ape; 2, a deer; 3, a remarkable small wild buffalo, resembling an antelope; 4, a wild pig; 5, the babirusa or "horned pig." ** 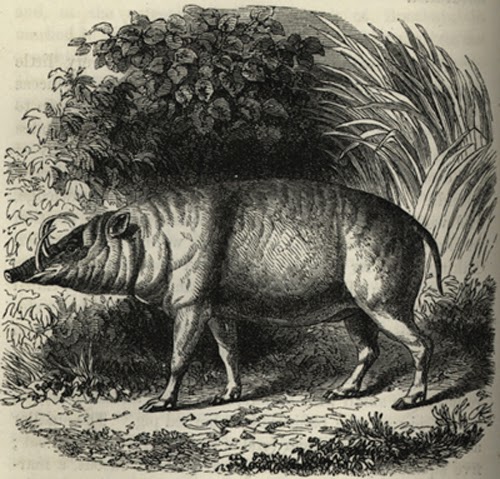 The Babirusa is found also in newer context. In the Balinese Hindu-era Court of Justice pavilion and the "floating pavilion" of Klungkung palace ruins this pig-deer is painted on the ceilings.
But also in the demonic masks used in Wayang Topeng the inspiration is clearly recognizable. The pig-deer was also used as a gift for visitors, fortunately the muse is now protected in Indonesia.*** 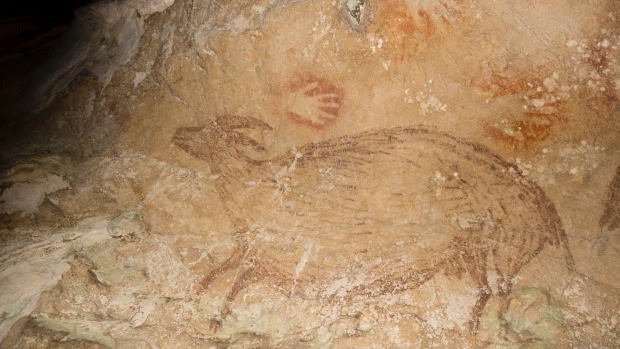 Hand stencils and a deer on cave walls in Sulawesi

Not only is the Rock Art in the caves on Sulawesi much older, in the South of Africa they already found similar kind of red ocher in a cave dated 70 thousand years old. It was just a fixed obsession that Europe was the origin of creativity. This new data will make it possible to find out more about different cave paintings in Borneo and Australia.


In the National Geographical August edition of 2005, which I'm also trying to get, was an article by Luc-Henri Fage. Here some very interesting quotes from this article:
"The paintings inside were as breathtaking as when we'd first seen them in 1999: some 200 stenciled hands, remarkably preserved, along with drawings of animals and humans. About half the hands were covered with dots, lines, chevrons, or other patterns. I counted more than 50 combinations. "They look like tattoos," I said to Chazine." ****
"...High above me in an alcove was a magical piece of art, six hand stencils spread like a bouquet. Each print was delicate, but together they seemed vibrant with energy as if they'd been created only moments ago."
"Handprints are a common motif in prehistoric rock art around the world. But unlike hands discovered at sites in France, Australia, and elsewhere, many in Kalimantan caves are decorated with dots, dashes, and other patterns, the significance of which is yet unknown."
"....I find a remarkable similarity between the act of creating these handprints and traditional healing practices in Borneo. To create the design, a painter would place a hand on the wall, then spray it by mouth with pulverized pigments made of ochre. A traditional healer would do much the same, laying hands on the affected part of a patient's body, then expelling his breath to spray on therapeutic ingredients. Both processes resulted in a kind of magic."
You can read the full article "Hands Across Time: Exploring the Rock Art of Borneo" online, unfortunately without pictures, but they look awesome, I'm sure!*****

To conclude this post, I quote one more thing. The last phrase from De Volkskrant article; "These were people that decorated their surroundings and objects (proof is found that not only the inside of the caves were decorated also the outside)".*

Should get into some spelunking...

* Article "Indonesië heeft oudste grotkunst" in De Volkskrant
** Notes by Alfred Russel Wallace on the Babirusa
***More about the Pig-deer or Babirusa on Wikipedia
**** Images from article "Cave Paintings in Indonesia Redraw Picture of Earliest Art" on National Geographic
***** Article in the National Geographic August 2005 by Luc-Henri Fage "Hands Across Time: Exploring the Rock Art of Borneo"
****** THE Nature article "Pleistocene cave art from Sulawesi, Indonesia"