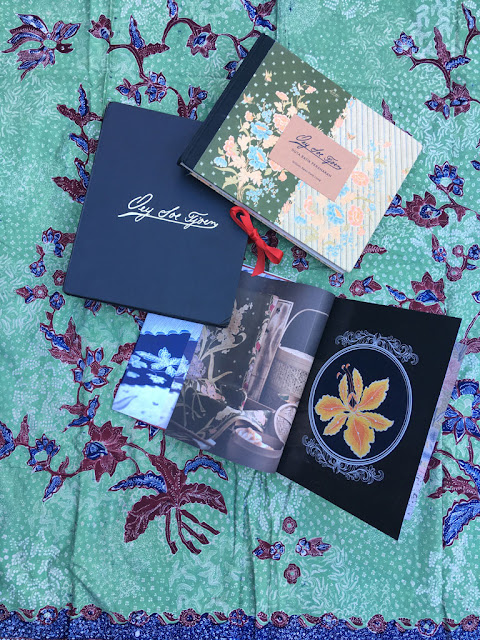 High on my wish-list of must-visit and must buy is Batikworkshop Oey Soe Tjoen. In the realm of Batik this is a very well-known name. It is one of the few Batikworkshops that is strongly connected to colonial history and still produces high quality high demand Batiks today.

I was planning to write on this for a while. I got two books in beginning of December and I was like, I will write when I have time to sit down and read them. Because I have a lot of reading and data processing going on for my researchproject next to starting up 4 collaboration projects, I did not manage to do more than flipping through the books. So today I though, I will just start this post and make this shout out to the third generation successor of Oey Soe Tjoen, Widianti Widjaja, nickname Kiem Lian. 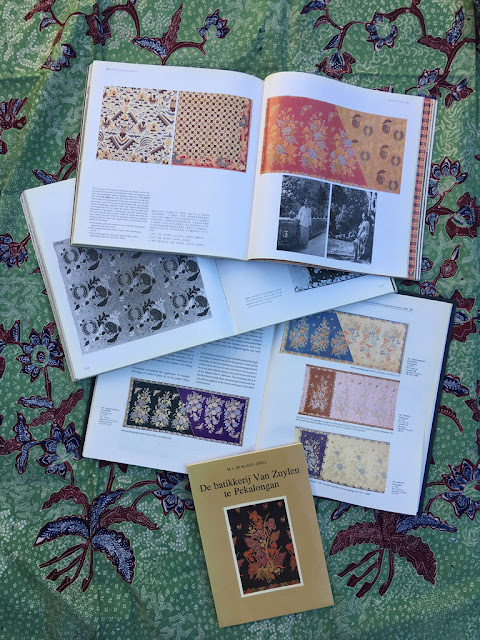 First a little more about Oey Soe Tjoen, Buketan & books. The first book I bought on Batik, 'Batik Creating an Identity' by Lee Chor Lin, included beautiful pieces by Oey Soe Tjoen and every book I bought after that. Even the books that were more focussed on Indo-European influence on Batik like 'Batik Belanda' by Veldhuisen and 'Fabric of Enchantment'. This has in a large part to do with the use of the 'Buketan' motif, the bouquet of (wild) flowers, on many of the Oey Soe Tjoen Batiks. The Oey Soe Tjoen family have always been working with Batik. At the end of the 19th century it starts with Oey Khing Tik and his wife, Siauw Tik Nio, as the first generation. The couple worked as batik traders. They did not make their own batik, but purchased Batik Kain and sarongs directly from pembatiks living in the Kedungwuni region, and re-sold them. Eventually they started producing their own batiks; Tulis, Cap and Kombinasi (Combination of Tulis and Cap). Their son Oey Soe Tjoen followed in their footsteps. Oey Soe Tjoen began to learn the business at a young age by helping his parents. He married in 1925 with Kwee Tjoen Giok Nio (more often called Kwee Nettie). Kwee Tjoen Giok Nio parents sold natural dye materials. In the beginning Oey Soe Tjoen would have used natural dyes, but their batiks are far better known for their bright colours in synthetic dyes.***

Oey Soe Tjoen started making imitations of the very popular motif ‘Buketan’, bouquet, after the designs of Indo-European Batik entrepreneurs Eliza van Zuylen (1863-1947). From the beginning of the 20th century until today the Buketan motif is very populair on Batiks from Pekalongan (ID). The tradition was starting, according to Dutch scholars, by Eliza van Zuylen, nickname Lies, and her sister Christina van Zuylen, nickname Tina. Tina's husband had a shop from which he sold school supplies, while his wife Tina sold floral arrangements aka bouquets. At some point they added Batik to their items to sell and when this went well Lien Metzelaar, another famous Batik entrepreneur, 'lent' Tina three Batikmakers. Elisa van Zuylen at some point also got three Batikmakers and around 1900's made a workshop at the Heerenstraat.* Eliza van Zuylen, or Tina, might have been the inventors of the Buketan motif, it was the Peranakan-Chinese Batik entrepreneurs in the same region who brought it to another level, and Oey Soe Tjoen was one of them. He added his own effect to the design creating a kind of shade in the flowers leaves. A story goes that Van Zuylen tried to create this effect herself but couldn’t.*** Emphasised in this juicy quote from 'Fabric of Enchantment': "While Oey started by imitating Lies van Zuylen's bouquets, he is the one who created a unique three-dimensional effect, which was perfectly copied by other Peranakan entrepreneurs {...}Van Zuylen herself tried to imitate the effect after 1935 for a Peranakan customer but did not succeed".*

After Oey Soe Tjoen died in 1976, his son, Muljadi Widjaja, and daughter-in-law, Istianti Setiono, ran the shop with his widow Kwee, still signing the batiks with Oey’s name. Kwee passed away in 1996, leaving the business to the second generation to run it further.
Muljadi Widjaja and Istianti Setiono had three children. Their daughter Widianti Widjaja was born on November 23, 1976, and was taught the dyeing techniques by her father. Muljadi Widjaja passed away in 2002 and the family business was carried on by his widow Istianti Setiono.
Today the batikworkshop is run by their daughter Widianti Widjaja and she continued producing the classic Batiks in the legacy of her parents and grandparents. She experiments with developing new designs, but always including the aesthetic elements that had become the trademark of Oey Soe Tjoen Batik.*** 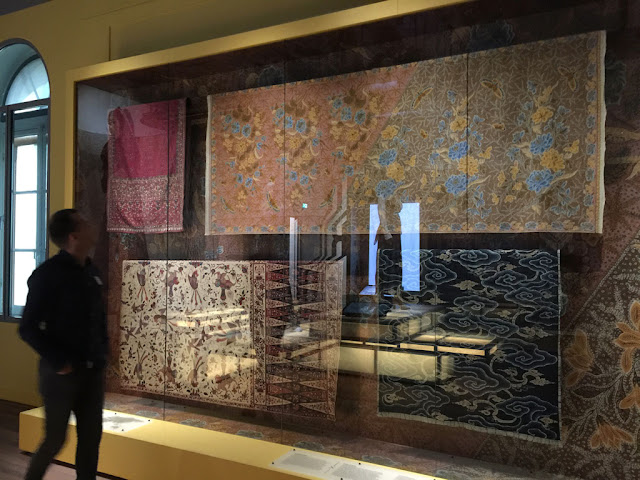 With going to the Oey Soe Tjoen workshop on my wish-list and returning to Java being somewhere in the future, I got very excited when the news came a book on Oey Soe Tjoen would be published, again. The first book that was written on this Batikworkshop was by no other than my Batik-mentor Pak William Kwan. It was only published only limited edition and sold out before I knew it was out. Luckily last year the book got re-published and also a new book was made. I could swap the two Oey Soe Tjoen books with two Dutch published books on Batik. I managed to get the special edition and when I opened it, I literally screamed of joy! The book includes a small Batik by Oey Soe Tjoen! So although I couldn't visit and shop at the workshop, I did get one! I am still over the moon with it!

I mentioned Widianti Widjaja, the current boss of Oey Soe Tjoen, also in my recent previous post 'Taking Batik Online' and she truly is part of the current online development we see in Batik. Next to being a guest in all kinds of Zooms and IG lives, she uses her own social media to post pictures and video of the making process. Which is an amazing thing. The quality of her work is very high. She has Batikmakers, but she makes Batik herself and does the entire dye-process. Very similar to Ibu Ramini of Batikworkshop KUB Srikandi. They are not bosses, they are Batik! And it is amazing to get in invite in this process through the internet. And not by someone who visits, but by Widianti herself! So go check it out on www.instagram.com/widianti_lian/ 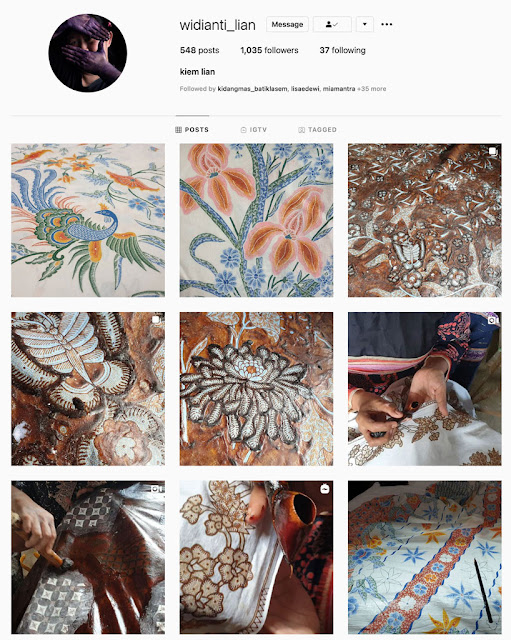 At the moment in the Wereldmuseum in Rotterdam one amazing piece from the Oey Soe Tjoen workshop is on display in the new semi-permanent exhibition 'Kruispunt Rotterdam'. It opened in September 2020, but the museum has hardly been open. Although the textiles on display will be changed, I hope we still can see the current picked pieces. The Batik by Oey Soe Tjoen was bought, or ordered to be precise, by the former textile conservator of the Wereldmuseum during a travel & collect journey she made on Java in 1968. Because I was involved in the selection process of the Indonesian textile pieces for this exhibition, I got to see this Batik up-close and it still has the price label on it! It is displayed with this to the wall, which is for me odd, because often signed/tagged/stamped pieces by Indo-European Batik entrepreneurs, as mentioned before, would have been displayed with their signature in full sight... So I share the pictures I took in the depot of the signature, labels and stamps here below: 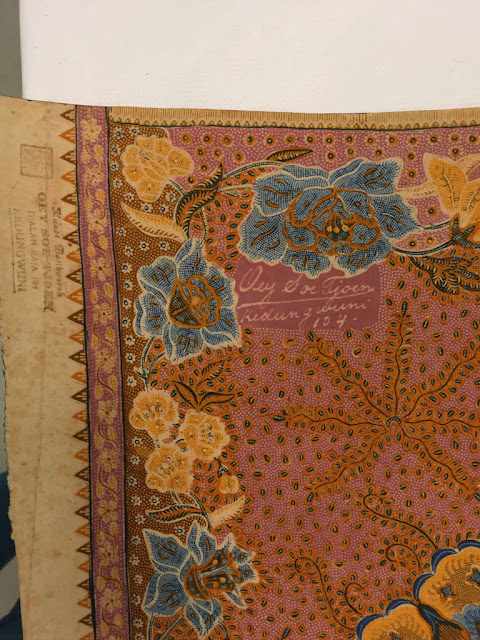 Stamp & signature on Pagi-Sore Batik currently on display at Wereldmuseum 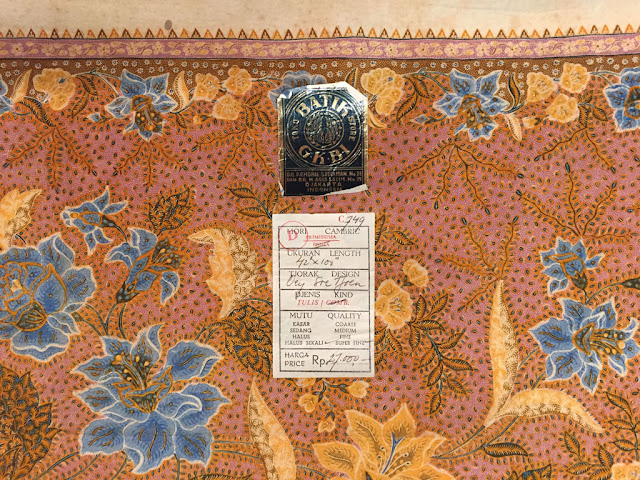 With Batik history how it is shared in the Netherlands, it is interesting how a Batikworkshop as huge and important as Oey Soe Tjoen mainly gets mentioned in comparison, however the Oey Soe Tjoen legacy still exists and flourish today! And I am so happy it is being celebrated, with books, exhibitions and online!

To enjoy more Widianti Widjaja, check out the IG interview aNERDspective 30 by aNERDgallery. On the website of aNERDgallery you find the full interview written out in English.

And on IG Live with Widianti Widjaja on Lawasan Batik

To enjoy more Oey Soe Tjoen, buy the books, also through aNERDgallery, or look at the pieces in the NMvW collection 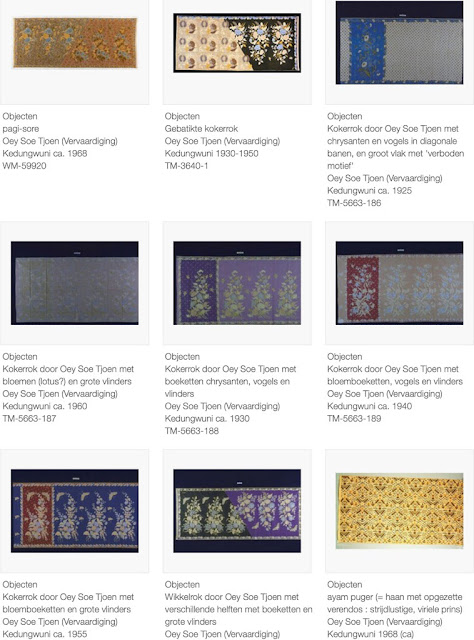 or in the online exhibition 'Singapore, Sarong Kebaya and Style: Peranakan Fashion - Discover the style of the Peranakan – a hybrid of interactions between people from Asia and Europe' on Google Arts & Culture

* From 'Fabric of Enchantment' and 'De batikkerij Van Zuylen'

** Blogpost title 'Fangirling over'; a girl or woman who is an extremely or overly enthusiastic fan of someone or something. fangirl. verb. fangirled; fangirling; fangirls.