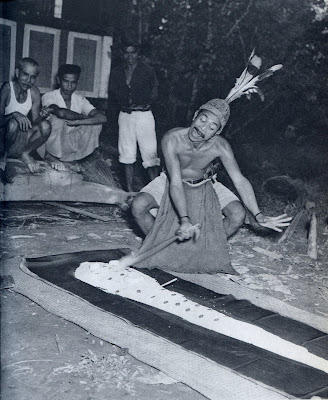 Found this picture in a book I bought at a secondhand shop. A man is performing a ritual dance during Tiwah, ceremony for the dead, at Manusup, around a fish made of rice.

"Death, the Dayaks belief, is considered a migration from the world of the living to the hereafter. Basically, the death ritual is to honor the soul simultaneously as a means to lead the soul of the dead towards the hereafter. Therefore, for the Dayaks of Central Kalimantan especially the Ngaju, the death ritual, called Tiwah is considered of the utmost importance.
The Ngaju believe that the soul Liaw of the deceased person keeps lingering in the family's surroundings. Only after the ritual known as tiwah has been held is the soul free to travel to the hereafter, called Lewu Liaw or lewu tata.

The death ritual consits of two parts. First, the ceremony which is held immediately after a person's death. Second, the tiwah, which is to lead the soul to the other world and concludes the death ritual. Generally, this ceremony is held a year after the person's death. Commonly it is held after the harvest season when there are not much work to do and food stocks are available. However, since a lot of money is involved, most people usually wait until enough has been saved, or else organize the event collectively. The ceremony may last for week or a month, depending on the wealth of the family. The bones are collected and wrapped in a kakandin (red cloth, placed into a garantung gong), then stored in the Sandung, the special storage house. All the while, the gongs and drums are sounded and there is chanting. The Upo or ceremony leader, speaks a formula, which is repeated by the basirs of panumba that is, the members of the group perfoming the ritual. The drums are again beaten, in the rhythm that changes with the mood of the narration. First, the soul is awakened. Then, it is invited to put on proper clothes and offered various delicacies. It is also given a new name."
- from www.borneotourgigant.com/Tiwah