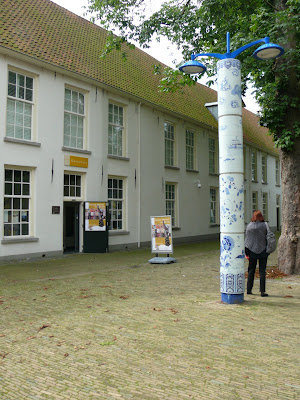 In the previous blogpost I told about my quest in Delft. A long time I wanted to visit the Museum Nusantara. The museum shows the history and the cultures of Indonesia and the 400 year old relationship between the Netherlands and Indonesia. The museum was founded by "Indische instelling" (1864 - 1900) in Delft.

So I started my day in Delft. The museum is on a beautiful location in the center of the city, right next to Museum Het Prinsenhof (former residence of Prince William of Orange)
On Saturdays between 11am and 1pm the 200-year-old Javanese Gamelan is played in the museum!

The exhibition "Between Heaven and Earth" shows the highlights from the collection in two different themes. The first theme is the Javanese court culture of which the krisses (see pictures below) and Gamelan are a part.

The second theme "Images of Magic" shows the spiritual life of the previously isolated island of Indonesia. The rich cultures following the important (unwritten) life rules of the adat in which Ancestor worshipping plays a big part. 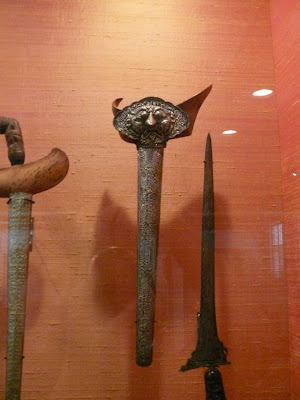 Ceramonial kris. The pendok or sheath of silver is shaped like the demon Kala, who as the story goes, stops the impact of snakes and blows. 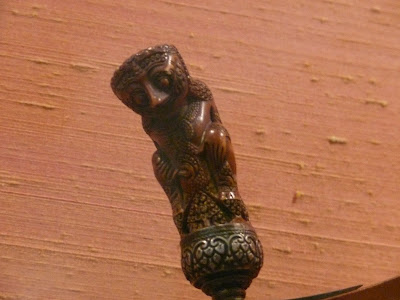 Handle of ivory, Kris of the type Jawa Demam, showing an human like figure with jewelry around the neck and ankles shaped like snakes or naga's 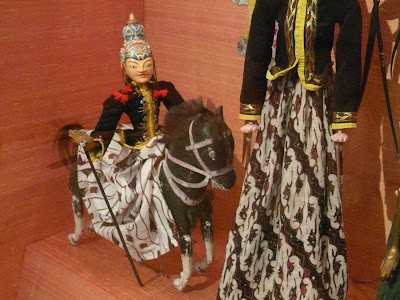 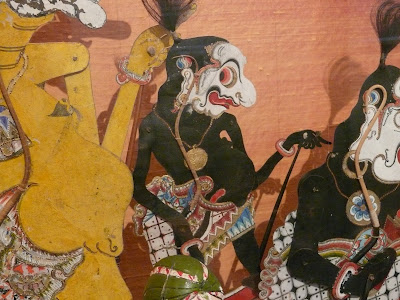 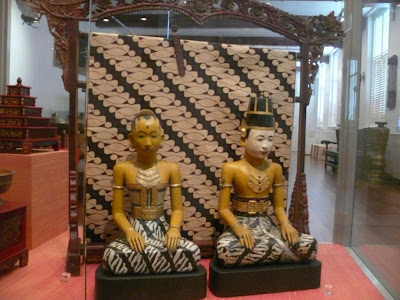 Everytime I visit a museum I'm always surprised by some information I didn't know but I should have known. Like the lovely bridal couple on the picture.
On Java you'll find these figurines everywhere. In special rooms, in every important building, but also in almost every house and in all the gift shops. I asked in Indonesia who they are, but they didn't know or told me that it was the sultan with his wife. This is the younger generation I'm talking about. I had a couple in my hand in one of the big gift shops in Yogyakarta, but didn't buy them, because I wasn't sure who they represented or what they represented. Sometimes "Good luck" isn't enough.

If I knew about this then, I think I would have bought more than one. It's Dewi Sri and her Sadono. (or Sedana). I was so surprised, how couldn't I have known. She's my favorite Goddess!
The figurines are called "Loro Blonyo", meaning two becomes one. They stand for fertility and prosperity.The figurines normally are placed in front of the wedding bed, Kobongan. In Surakarta (now Solo) the use of these figurines was reserved for royalty.
In the bridal room also pots for cooking rice are placed under the bed. In many legends they tell the story about Dewi Sri, the Goddess of rice and how she and her brother (also called Dewi Sedana) were the bringers of prosperity (in the form of Rice) and were the protectors for the farmers (in one story they change in a Burung Walet (Swallow) and a Ular Sawah (Sawa snake) to protect the rice plants from being eaten by insects and rats).
I still don't know why her groom is also her brother. There are many different stories about Dewi Sri, the origin of Rice. And the role of her lover or brother in these stories are different every time. Maybe the translation sometimes change their relationship, or it's more about the strong connection between two persons. Maybe the term brother or groom isn't the right word, but comes closest to the divine connection Dewi Sri and Dewi Sedana have.

I bought this wonderful book about Dewi Sri in the gift shop at Museum Nusantara. It's by Ruud Greve and tells all about the stories, legends and rituals around the Goddess of Rice. So more where that came from next time! 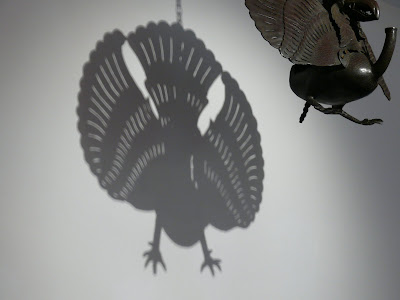 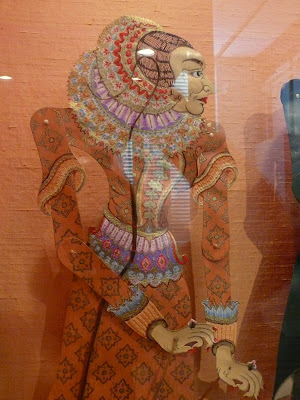 In 2009 the museum ordered this Wayang group at the Wayang puppet maker Ki Ledjar Subroto. It tells the story about the murder of Willem Of Orange. East meeting West on a very special way. 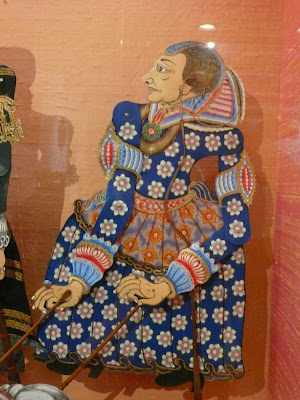 Nusantara owns a big collection of Ikats from Sumba. They are beautiful displayed (but it's very dark, for the safety of the fabrics, so difficult the photograph) and they have new & older ones. Below some details of two Ikats. 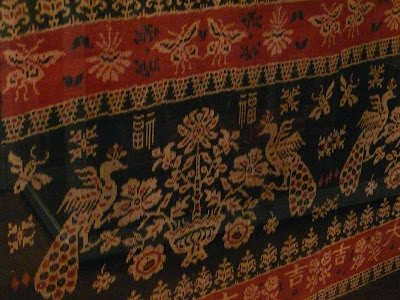 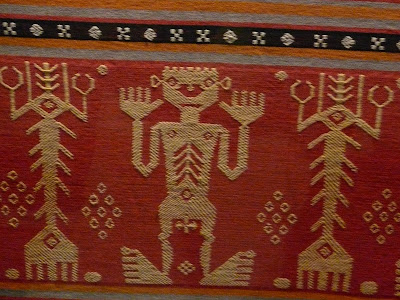 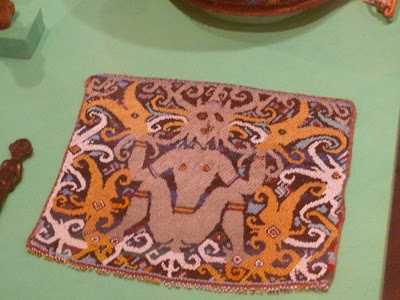 Beadwork patch for a baby carrier from Kalimantan from before 1934. The central motif is called kalong kalunan. The figure has arms that become hornbills and feet that become dragonlike figures called asu. Symbols for the tree of life and the entire cosmos. Only nobility can use this motif. 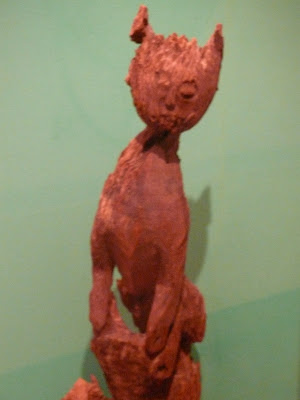 Guardian figure shaped like a feline, a clouded panther Neofelis diardi from Kalimantan from before 1925 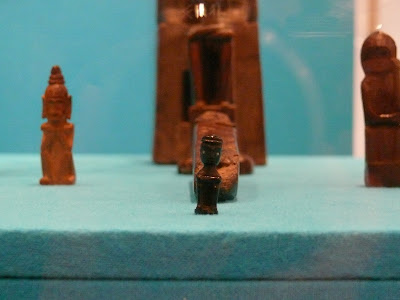 When I left the museum I wrote something in the guestbook. I sat outside for a while and decided to visit the Museum Het Prinsenhof. I was putting away my backpack when the security of Nusantara entered, looking for me..He read my comment in the guestbook and thought I should meet the curator ("conservator") of the museum. I'm very happy he did that for me! I met the curator shortly and received shortly after my visit an email.
In the exhibition of the museum there are no Batiks on display, but they have Batiks in the depot and I'm invited to see them, jippie! But first I'm going to interview the curator. I always been very interested in history, archeology & Anthropology and before I went to the Art Academy I dreamed of becoming an restorer.
So how do you become the curator of the Museum Nusantara, what is her connection with Indonesia and what are her favorite items of the collection, more questions and more importantly the answers end of October here on The journey to Batik (see blogpost Interview with Assistant curator of Museum Nusantara.)