Give honor to whom it’s due 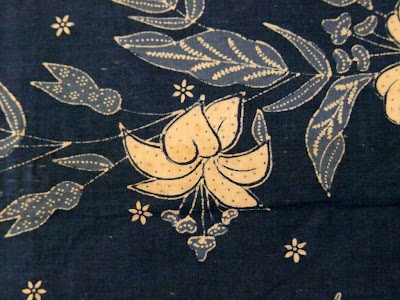 Detail from a Batik signed by Maria Paulina Carp


Saturday 17 december a special textile exhibition Sarongs van naam. Design in batik 1880-1940 starts in Museum Nusantara in Delft. The exhibition including Batik Belanda among which a very special new collection item, a Little Red Riding Hood-Batik signed by Eliza van Zuylen.
I interviewed Assistant curator Louise Rahardjo when the exhibition was still in its early stages of choosing the right Batiks for display. She also told me about the Little Red Riding Hood-Batik, but it wasn't sure if the museum would get the Batik, so I couldn't share the information with you.
I saw a Little Red Riding Hood-Batik in, I think it was the Batik museum in Pekalongan. I wasn't allowed to make pictures there. I know that I came in a room full of Batiks on wooden-displays. On my left I saw a Batik which I immediately liked. The guide laughed, I was liking Batik Belanda. On the other side of this Batik was the Little Red Riding Hood-Batik.
I felt a bit silly. Not only did I liked the Batiks made by Dutch hands more, or better said, its easier for me to like them, because I understand them. And that was the whole reason "we" interpreted Batik and made our own readable ones. In short, I felt like a Dutch colonist. Fortunately I learn more about Batik and my history everyday.

With the upcoming exhibition on Batik Belanda I thought: This is a good moment to share the Batiks made by Maria Paulina Carp. In August I visited the Tropenmuseum in Amsterdam to document these Batiks. I was invited to give a presentation about my journey to Batik at the Indische Huiskamer in Eindhoven. I met madam Rosielle-Bergsma, the granddaughter of Maria Paulina Carp. She told me about the Batiks she gave to the Tropenmuseum. I decided to surprise her and ended my presentation with photos of Carp's Batiks.

These Batiks by Carp are getting more and more interesting. Madame Rosielle-Bergsma told about her grandmother during the presentation. Apparently Maria Paulina Carp was at the time competing with Eliza van Zuylen.
Eliza van Zuylen claimed Carp stole her designs. This maybe explains why in the information I got from the Tropenmuseum they say: "The five signed Batik that survived show no own style, they are rather imitation of Indo-European works".
I was surprised when I saw these beautifully made Batiks before me. The conservator of the Tropenmuseum agreed with me, how can they say that about these Batiks. But at the time I didn't know that Carp was already accused by van Zuylen around 1900. I thought the experts concluded this later about the Batiks.

To find out more I visited the library of the Textielmuseum in Tilburg. Great library by the way. The librarian asked me why I was there, so I told about my blog and she knew it. So I didn't dare to touch anything at first, haha.
The quote about Carp's Batiks is from the book "Fabric Of Enchantment" (in the book they say six Batiks instead of five). Love to own this book, but I don't, but the Textielmuseum does, so there I was.

Maria Paulina Carp was the only, as far as known, Javanese Batikworkshop owner with a European name in Pekalongan. After 1860 Pekalongan became the most important production place for Indo-European Batiks, better know as Batik Belanda. The original Batik Pekalongan changed to fit the Indo-European market. The Indo-European Batikmakers introduced signing their designs, which makes it quite easy now to trace the maker. Although they signed their designs a lot of imitations where made. The so called "Peranakan entrepreneurs" copied famous or popular patterns. Copyright didn't exist yet.

The Batiks from Pekanlongan changed, become more western. The original "Pesisir bang biru" ("Red-blue batik from the waterside"/Coastal Batik) was interpreted in different shades of blue and red. The light coloured bang-biru's didn't resemble the original ones at all.
Also more straight lines and a division of the surface like seen in wallpaper was introduced in the designs. And last but not least Batik Buketan was created.
All three examples are nicely represented in Carp's Batiks. Which makes her the perfect new style Batik Pekalongan maker or a very good, "too perfection" as they say in "Fabric of Enchantment", imitator.
Probably Rens Heringa and Harmen Veldhuisen (the authors of the book) are right, but reading about Maria Paulina Carp I can't help but wonder if her being Javanese and all had anything to do with it.
The designs of Batik and the patterns used, tell something about the maker and the wearer. You can "read" from which area the Batik is. You can read what kind of plants grow there, what occupation they have, if they're rich, what their origin is and much more. Patterns are copied to explain this. By using the same pattern and design the right information is shared.
What made doing this so different around 1900. Is it something western to claim "this is ours"? Typing this, I'm already thinking: "Yes, of course!". How many times did we invade countries and claimed it to be ours..silly me..

The Indo-European where the first to sign their works. Before that the design of a Batik had to tell you where it was made, not the signature. The designs made by Indo-European Batikmakers where based on the original Batiks made in Pekalongan. Traditional background motifs were incorporated into the new designs, but the patterns lost their meaning, probably because they didn't know what it that meaning was. The "kraton" patterns like "Kawung" and "Parang Rusak" were adjusted for a larger market. Before these motifs were meant only for royalty. So how original were the designs to start with? 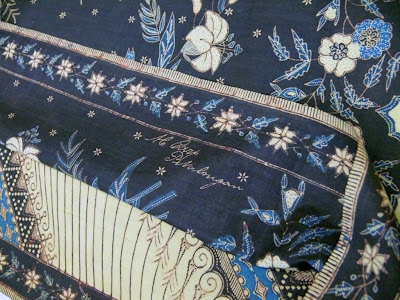 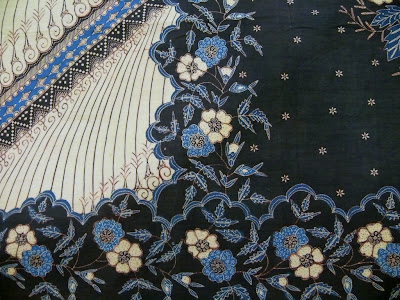 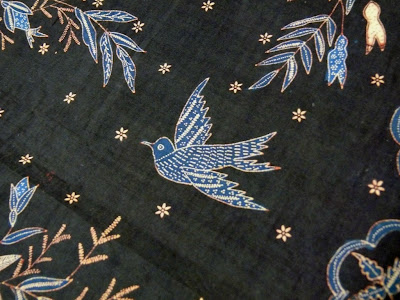 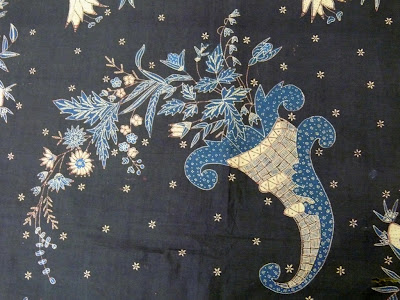 This dark and light blue Batik is a nice example of authentic motifs with western influence. The oblique lines are found in a lot of Batik and usually for the base of the Batik. I read somewhere that its called "drizzle". I remembered it because I found it strange that a pattern is called after a kind of rain in such a sunny country. The center of the Batik, "kepala", is filled with a french style motif. Birds and butterflies flying around wine baskets.
France had always, and still has, a big influence in fashion and lifestyle. Copying the french vogue in clothing, decorating and our interior. Apparently we even took the french style to Java.
Art Nouveau (during 1890–1910) pattern were adopted in Batik. Batikmakers used postcards and books to make their new designs. A. J. F. Jans made a Batik with orchids based, most likely, on a design by William Morris. I made a wallpaper (see Orchid, silk-screen print on (wall)paper) based on that Batik, its quite funny considering that it probably was a William Morris wallpaper design. 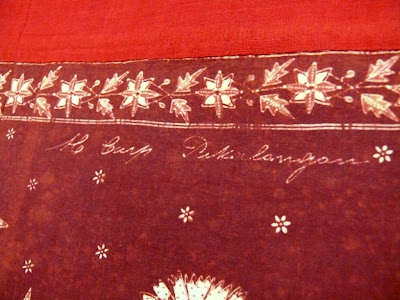 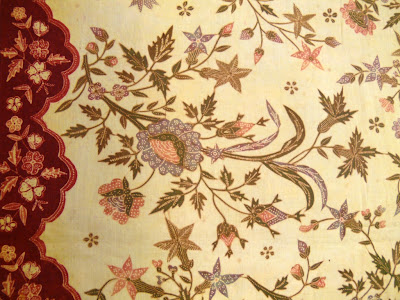 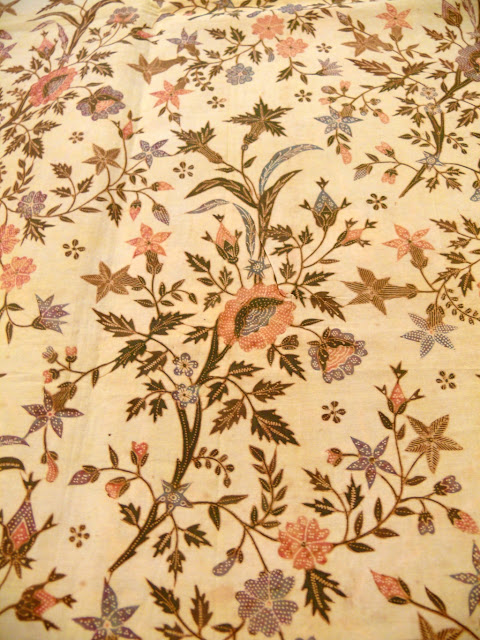 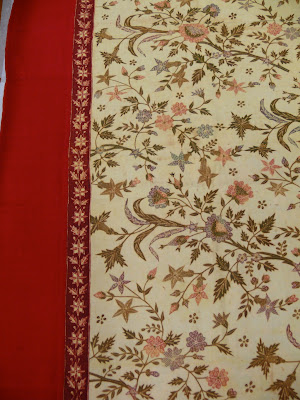 Typical Batik Buketan in both colour and motif. Really beautiful how the colours are still so vibrant. Nice contrast between de dark/light red and the white with the pastel flowers on it. This colour combination was and still is very popular in Batik Buketan (see also blogpost Batik Buketan). 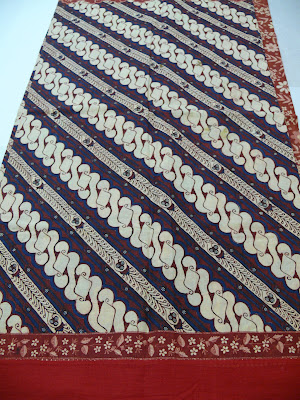 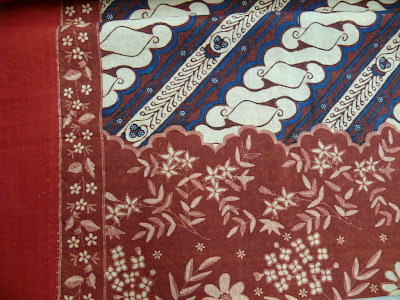 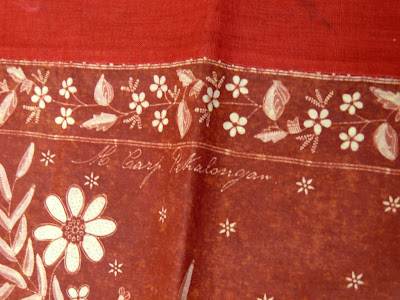 I think this is based on the original Batik from Pekalongan, "Pesisir bang biru". I don't know how much is changed or added in the design to make it more western. If you have more information, please let me know! 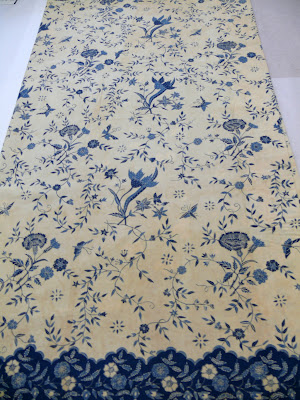 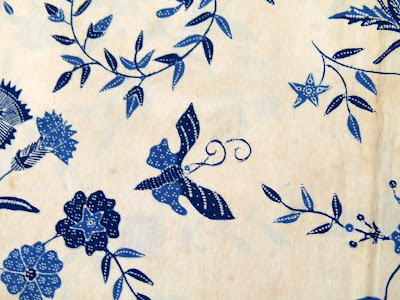 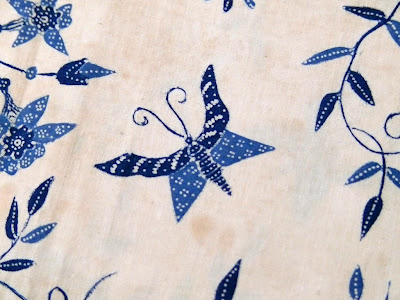 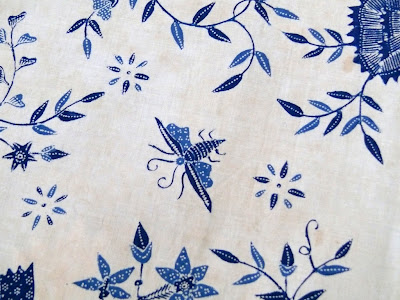 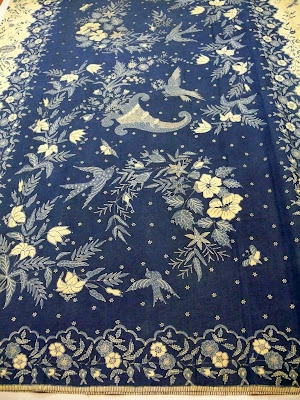 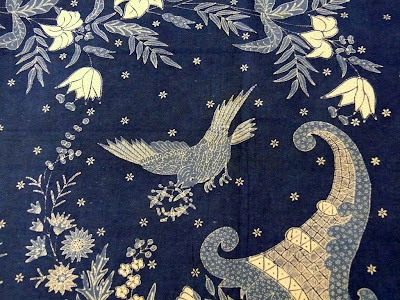 This last one will classify as a Batik Belanda based om Delftware. I'm learning more about Delftware to find out how Delftware influenced Batik and what is incorporated in the pattern. In Delft I went looking for Delftware (see blogpost A quest in Delft part II, haven't got any answers yet, only found more beautiful things with interesting histories.
In this Batik the Delftware influence is clear in the use of colour. A white background, "badan", with the pattern in light and dark blue. The flowers look like carnations with butterflies and moths buzzing around it. The "kepala" is dark blue based with a white and light blue pattern similar to the design of the first Batik. Flower garlands growing out of boot-shaped wine baskets while birds fly around carrying branches.

It's unknown how long Maria Carp's Batikworkshop was open. Only five or six Batiks remain, four of them are at the Tropenmuseum and one is in a private collection. The Batik in the private collection looks a lot like the "Pesisir bang biru" Batik above.

Of course I will be attending the opening Saturday at Museum Nusantara in Delft and give you a report here on De reis naar Batik!

Absolutely exceptional design work and a fascinating article. Thanks very much for the information.

Thank you :). I just visited a exhibition about Batik Belanda, so hopefully more information about this subject soon. It's a very interesting part of Dutch history, especially for me and my love for Batik.