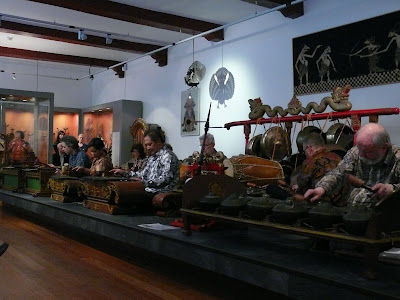 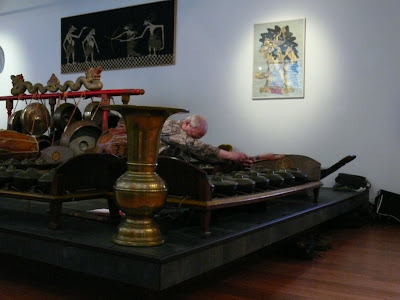 The exhibition opened with a Gamelan-concert by Gamelan group Marsudi Raras. For 30 years they rehears on the more than 200 year old Gamelan at Museum Nusantara. Every Saturday you can attend their rehearsals from 11.30h till 14h. They have a short break now and they will start the rehearsals on 14 January 2012. 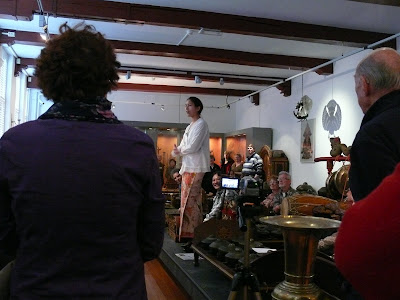 Assistent curator Louise Rahardjo gave a short speech about making the exhibition and her special clothing. She was wearing clothing that was traditional for Dutch women in the colonial time. When they arrived in Indonesia, their corsets and petticoats didn't combined very well with the tropical climate. They started wearing the traditional Batik as a sarong with a white kebaya. Louise Rahardjo was wearing a beautiful sarong. I photographed it when I visited her, see blogpost "Interview with Assistant curator" . The Batik belonged to her Indochinese grandmother who wore it at her wedding. The kebaya was from her Dutch great-grandmother who wore it in Indonesia.

It's a great exhibition for people who love Batik and for those who want to learn more about it. I saw so many Batiks I only know from books, great! In January more information about the Batiks separately will be added. So I'll keep you posted about that. Also I will be re-visting the exhibition. Louise will be sharing more information about the Batiks. She did a lot of research and I'm looking forward to hear what she discovered & learned. 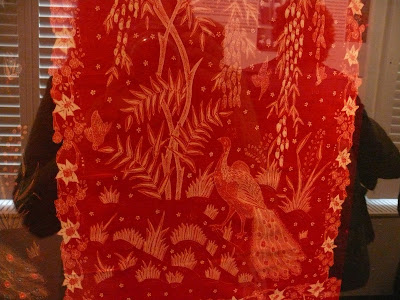 Very beautiful bright red Batik with fine detailed peacocks, I can imagine this was a bestseller 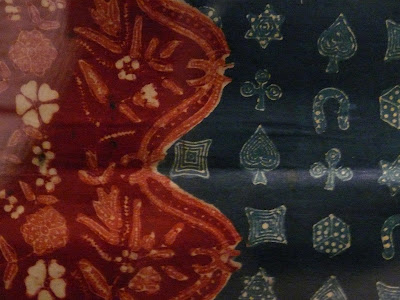 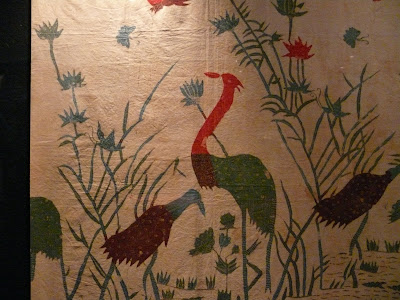 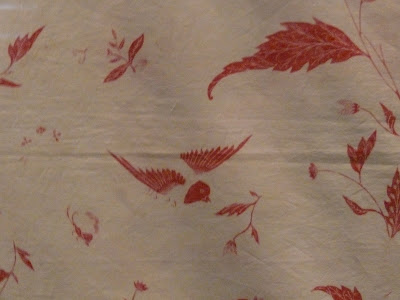 This Batik looks unfinished, with one red dye wash. The birds look like Metz-birds ("Metz-vogeltje"). Lien Metzelaar had a great influence on Batik. She was the first to make big changes in the motifs, like the simplified single standing flower bouquet that started Batik Buketan. More about Lien Metzelaar in my upcoming post about the Little Red Riding Hood-Batik 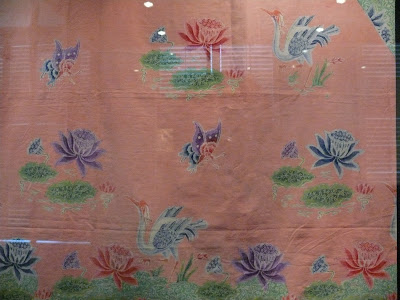 Found a Batik with water-lilies and also a very pretty one. This one shows the Chinese influence on Batik. Cranes in a salmon pink lake full of water lilies with typical Chinese style butterflies flying above it. The Batik from Pekalongan around 1930 is signed by Go Tjan Liem. (see blogpost "Water lilies & table linen")

In my next post I will be telling more about a very special new item that is shown at the exhibition. A Little Red Riding Hood-Batik. In my previous post I say it's signed by Elize Zuylen, but that's not true, my mistake. It isn't signed and the maker is unknown. Copying each others work played an important role in the Batik Belanda fairytale.