Little Red Riding Hood, where are you going? 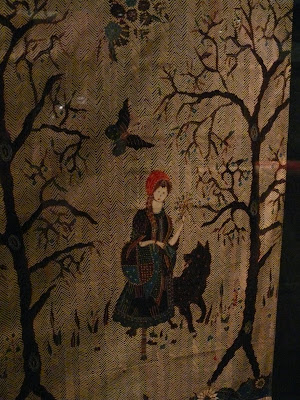 Reading three, no four books and an essay about the influence of the Netherlands on Indonesia, and visa versa, during the colonial time. First of I'm apparently interested in the same things artists where interested in during the beginning of the 20th century.
I quote:
"In the Netherlands at the turn of the 20th century, Dutch artists were inspired by batik as a technique and by its patterns as a part of a general new wave of Orientalisme in European art. It was used by applied art movements to revive Western art, which had been neglected in favour of industrial mass-produced decorative objects. Artists such as Carel Lion Cachet, Gerrit Willem Dijsselhof, Johan Thorn Prikker, Chris Lebeau, Agathe Wegerif and Bertha Bake designed room screens, book covers and wall paper, among other objects havng to do with interior design and functionality, and were part of the Art Nouveau or 'Nieuwe Kunst' movement of that time. This movement looked for inspiration in batik techniques and motifs, and all these developments resulted in a growing appreciation of batik as a form of art."

Can I ever think of anything new in this life time, haha...But seriously, this shows that Batik had a direct influence on our art scene. The quote is from the essay 'Collectors Collected: Exploring Dutch colonial culture through the study of batik' by Daan van Dartel, published by and filled with batiks from the Tropenmuseum. Very interesting and very helpful, so more information from that will definitely follow in next posts.

Sitting in Museum Nusantara I was reading some information about how Nusantara developed from a royal academy for engineers and colonial civil servants to a museum about the cultural treasures, history, religion and traditions of the Indonesian archipelago. In it the 'Wereldtentoonstelling' is mentioned. "The 'Koloniale Wereldtentoonstelling van 1883' ('International Colonial and Export Exhibition') was a colonial exhibition (a type of World's Fair) that was held in Amsterdam. The event drew at least a million visitors and was the first international colonial exhibition, with 28 different nations presenting their colonial trade and wealth."
Sitting there drinking my coffee and enjoying eating spekkoek I was thinking: "Don't I own a book about that?".
Well I don't own a book about that, but I do own a book about 'De Nationale Tentoonstelling van Vrouwenarbeid in 1898'. The book with the title 'Feministische openbaarheid' is about how the exhibition gave attention to the limited job options women had and under which harsh conditions the female workers earned their living around that time. The "Tentoonstelling" lasted 3 months filled with exhibitions, conferences and demonstrations of crafts. They even had a reconstructed Indonesian Kampong with music and dance performances and of course there was a room filled with Javanese Batiks, Batik Belanda and imitations prints from a cotton print factory (in Haarlem?).
I remember buying this book. I was in this totally too cool bookshop in Amsterdam and I didn't wanted to leave the shop empty-handed when I saw this book on the discount table. I was still very into our feministic history, because I graduated with a thesis about feminism and women in Art called 'What a Art-girl needs to know, Women's Art and Society from 1900 until now' and bought a lot of books about this subject. So I bought it, but never really read it, until now.

In 'Vertrouwd en vreemd: ontmoetingen tussen Nederland, Indië en Indonesië', which I'm also reading, they use information from the book above to show that there was a lot of criticism from the Netherlands concerning Batik Belanda. Madam G.A.N. van Zuylen-Tromp (no relation to Eliza van Zuylen) found Batik Belanda of such bad quality that the traditional Batik had to be protected from its influence. The inspiration and motifs used in Batik Belanda were of no meaning and only based on fashion. The European influence "corrupted" and "degenerate" the East Indian Batik industry.
Ow I'm enjoying this so much, it's like reading a soap opera of real fact & fury

Another nice thing I came across in 'Vertrouwd en vreemd', which I bought because it contain an article 'Little Red Riding Hood in Batik, From Batik Belanda to Batik Hokokai' by Amy Wassing, is that "Eliza (van Zuylen) copied and bought motifs from other Batikworkshops". Aha! 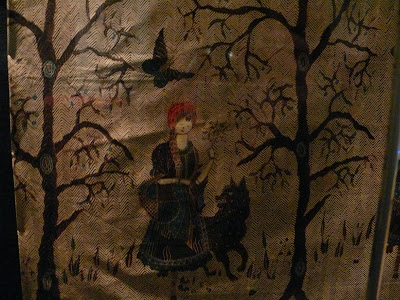 So lets go back to the start, I will tell you more as the story unravels. Once upon a time, there was a little girl who lived in a village near the forest. Whenever she went out, the little girl wore a red riding cloak, so everyone in the village called her Little Red Riding Hood.

All this reading started with the batik I saw at Museum Nusantara, the Little Red Riding Hood-batik. This batik is a very good and clear example of the Western influence on Batik. A French fairytale to warn you to never talk to strangers and keep your knowledge to yourself because the big bad wolf might be outsmarting you (and don't lose your virginity to a sweet talker, but that's a different explanation of the story) ends up on a batik in Indonesia around 1905.

The more I read about the colonial time, "tempo doeloe", I realize people don't change. A lot of the choices made were and still are based on greed, jealousy and ego. Eliza van Zuylen is pointing her finger at Maria Paulina Carp calling her a thief, while Eliza is copying and buying designs from other Batikmakers herself. And this Little Red Riding Hood-Batik was such a design, copied by every big player in the Batikmarket.

Batikexpert Harmen Veldhuisen tells in "Batik Belanda" that Carolina Josephina von Franquemont started with the fairytale batiks. Von Franquemont was the first women as far as known to start her own Batikworkshop. She started age 23 and in 1845 opened her Batikworkshop nearby Semarang. She mostly concerned with developing new dyes and designing new patterns for her sarong, it's unknown if she made batik herself.
For her patterns she used motifs from the Dutch craft magazine Aglaja. She even got the exclusive right by the publisher to do so. By enlarging, rearranging and combining, she created a totally new batik style.
Von Franquemont died in 1867 when in June an earthquake wiped away her batik workshop.* After that her house and belongings were sold by public auction, showing that she had a well-paid business. This inspired other Indo-European women to start their own Batikworkshop.

In 1903 till 1906 more than 20 Batikworkshops were listed in Pekalongan with European names. This is also when the stealing and copying started. The competition was strong between the workshops. You mostly work on commission and if someone's design was very popular, it was easier to make money by copying that design than stick to your own. To protect their designs, Batikmakers started signing their works (see also my post about Maria Paulina Carp "Give honor to whom it’s due".
But this didn't stop the copying at all. Batiks are still made building on motifs by famous Batik Belanda entrepreneurs.

Maybe Von Franquemont started the fairy tale trend, but I think it's Lien Metzelaar's Little Red Riding Hood (LRRH) design that is probably the one that got imitated. Looking online I found three similar Batiks as the one from Museum Nusantara. One is by Lien Metzelaar from around 1905. The background motif on the badan, called bilik or gedekan, is exactly the same as the Nusantara-batik. The one at the Tropenmuseum shows a different motif on the background, also the face of LRRH is a bit crooked. It looks like the "Metz" version has more detail, but it hard to say if you can't see the real deal.
I also found Eliza van Zuylen's LRRH Batik and read that after Lien Metzelaar died, Madam J.C. van Ardenne-Simonet bought her Batikworkshop and designs including LRRH in 1918. They all look so similar...The way she is standing underneath the tree, with a red hat, more than a red hood, the wolf coming from behind. Who was the first to draw it like that? 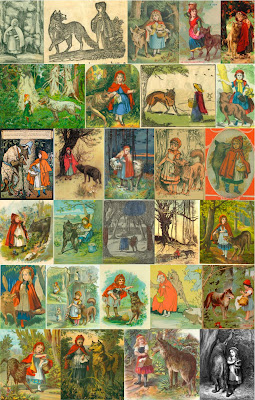 One theory is that freelance artists, "tukung sungging", drew copies of book illustrations and sold them to Batikworkshops. This could be the reason why identical patterns appear in batiks from different Batikmakers. If the LRRH-batik is based on a book illustration from around 1900 and you'll find that illustration you will know which design came first. Well I looked up about a hundred roodkapjes, rötkapchen and le petit chaperon rouge from 1830 till 1908, but found no match, yet.