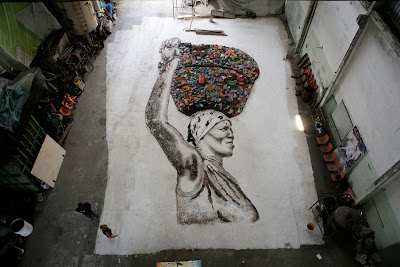 Wednesday I drank coffee and discussed Art with my friend and artist Isa Gama. She showed me some fine works of Art online and inspired me to write a new blogpost. We both like big, epic, monumental Art, but we also care a lot about detail and concept. Something can be big, but that doesn't make it epic. It has to be jaw dropping. When an Artwork is made with dedication and much labor it helps with the 'epicness'. For me most important is that an artist shows a similar quality in the execution of works both big and small. Sometimes one work is really strong but looking at other works of the same artist you'll see that it only was because it's big and in your face. 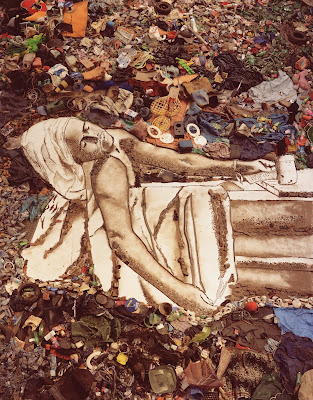 Good example of an artist that is strong in big & epic and small & detailed is Vik Muniz. Vik Muniz (1961, Brazil) is a visual artist living in New York City. Muniz began his career as a sculptor in the late 1980s. Muniz became best known for his 1997 series Pictures of Chocolate and 2006's Pictures of Junk. In this great TED talk Vik Muniz talks about making art with sugar, spaghetti and much more.

In 2010, the documentary film Waste Land, directed by Lucy Walker, featured Muniz's work on one of the world's largest garbage dumps, Jardim Gramacho, on the outskirts of Rio de Janeiro. This DVD will be for rent at Cultvideotheek Next Page in Breda soon! 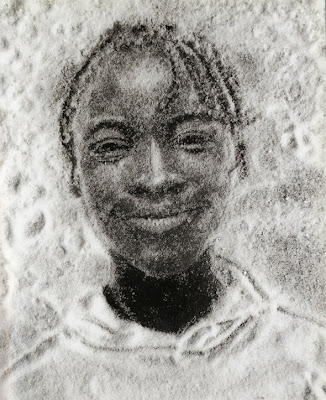 'Sugar Children', 1996 by Vik Muniz In his big large installations the focus on detail is as strong as in the smaller pieces like the portraits made out of sugar. The choice for working big has nothing to do with trying to make it in to something more than it is, but necessary to get details and depth. Of course its grandeur both in the Artworks as the project itself gives it a greater range. More people will be flabbergasted and it gets more media attention this way. 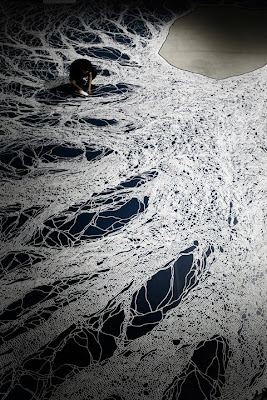 'Forest of beyond', 2011 by Motoi Yamamoto Another great example is artist Motoi Yamamoto. His salt sculptures are big, beautiful, definitely epic and full of detail. I really like his Salt Project "Returned to Sea". Visitors where asked to return the salt used for the artwork to the sea. And document the moment when the salt is returned to the sea. 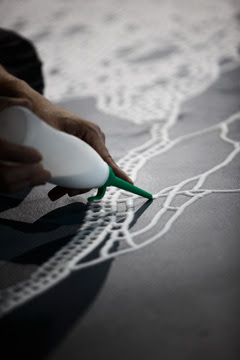 Making of 'Forest of beyond', 2011 by Motoi Yamamoto "The form as the work disappears. However, this salt dissolves in seawater and will support the life of various creatures. Possibly the opportunity when we eat it may come. Of course it is the best joy for me if it can meet again as material of the works." - Motoi Yamamoto

'Returned to Sea', project by Motoi Yamamoto I think the images of the people collecting salt are very strong. Stronger than the pictures sent by the public. It looks like a performance almost, reminding me of making 'Dance in a ricecarpet' and helps me to 'think big' while writing my new project proposals.