Plant a seed and let it grow 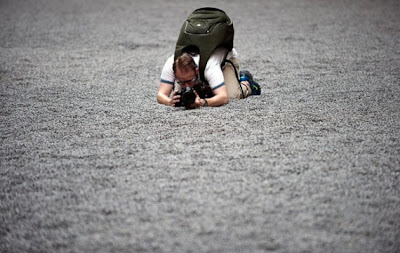 Beginning of last year an artwork and the maker of it where in all the newspapers and strongly represented on different social media. First his installation at Tate, later his arrest. Yes, Ai Weiwei. His art is coming to Tilburg (NL)! I was so happy when I spotted the announcement posters of his exhibition at De Pont! Starting the 3th of March till 24th of June, a real much see! 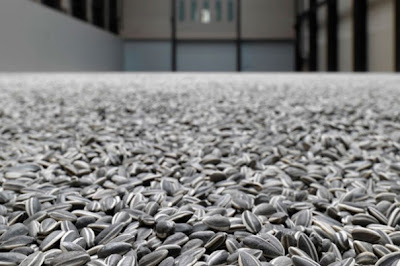 'In October 2010, Sunflower Seeds was installed at the Tate Modern Turbine Hall, London. The work consists of one hundred million porcelain "seeds," each individually hand-painted in the town of Jingdezhen by 1,600 Chinese artisans, and scattered over a large area of the exhibition hall. The artist was keen for visitors to walk across and roll in the work to experience and contemplate the essence of his comment on mass consumption, Chinese industry, famine and collective work. However, on 16 October, Tate Modern stopped people from walking on the exhibit due to health liability concerns over the porcelain dust. In February 2011, a 220-pound (100 kg) pile from Sunflower Seeds sold for $559,394 (well above its high estimate of $195,000) at Sotheby's in London.'
-Wikipedia 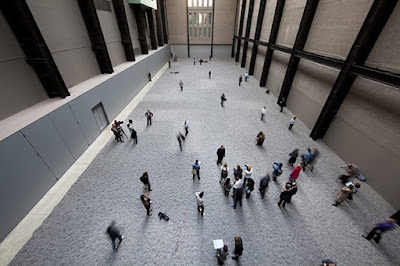 "On 3 April, Ai was arrested at Peking Airport just before catching a flight to Hong Kong and his studio facilities were searched." Reading about his arrest in the paper, I was so shocked and at the same time fell in love with his Sunflower Seeds installation. What could we do, how could we help? On Facebook everyone was talking about it, it really went viral. Wauw, people do believe in Art, freedom and having an own opinion! It really awakened something.

At that time I was invited to show my performance "Dance in a ricecarpet" during Starry Night, an evening inspired by the heritage of Vincent van Gogh, in Etten-Leur. I based the design of the ricecarpet on Vincent's work, making a cycle of his life starting with growing Sunflowers and ending with grain, but I wanted also to say something about what was happening with Ai Weiwei. It felt like a bomb ready to be detonated. I decided to change the performance. We already had to make some adjustments due to the outdoor location and a cancellation by one of my musicians. We started the performance with chaos and destruction, symbolizing the powerlessness I felt and the need for change. The lentils used for Barbara's drawing in the ricecarpet where replaced by sunflowerseeds. Instead of silence, a ticking sound was made, passing time like a ticking clock, but also counting down. This one was and is for you, Ai Weiwei!