Spring is in the air, it's time to get busy in the garden and start growing sunflowers! Last year we moved from an apartment to a house with garden. I was (and still am) so happy to be back on the ground again, watching birds and putting my hands in the dirt. I started a new work in December of 2010, but it developed very slow. My subject for it literally had to grow. I had so many doubts while making this work. Every pattern I added was followed by weeks of thinking. I photographed birds in my garden for days. Made a path of left-over sunflowerseeds (from Dance in a ricecarpet) to get better images. I cultivated Sunflowers and had to wait months before they reached the right frame.
It took me a year to make my painting for a Pagi-Sore Batik design (Day-Night Batik). It was a tense year in which a lot happened. 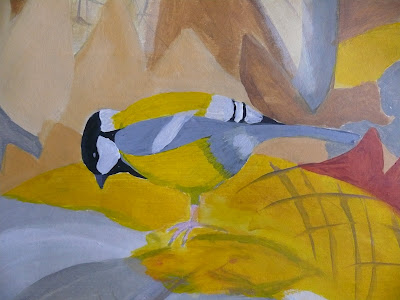 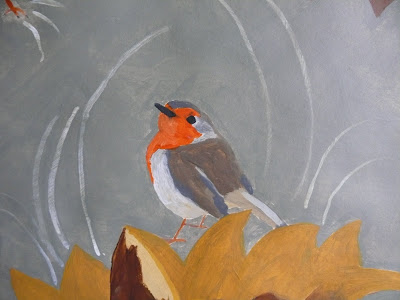 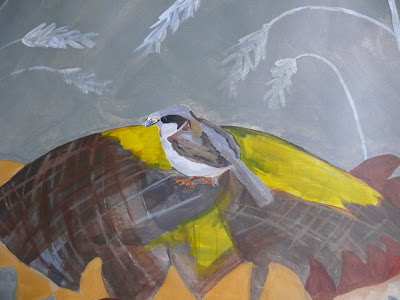 I named the Batik 'Difficult Time'. A reference to the Pagi-Sore Batiks I based my design on.
The Japanese Empire occupied Indonesia, known then as the Dutch East Indies, during World War II from March 1942 until after the end of War in 1945. The period was one of the most critical in Indonesian history.
During this period Hokokai batiks were made. Hokokai is also called 'Difficult time'. *The batiks were commissioned by and created for the Japanese market during their occupation of Indonesia. Workers from the top batik workshops which had been taken over by the Japanese made batik to maximize the dwindled supply of materials (cotton and dyes). They drew and dyed motifs favoured by the Japanese such as butterflies, cherry blossoms and birds. These batiks had as many as seven colours and every available space on the cloth was filled with the minutest isen motifs (filling in the left over space between bigger motifs with a smaller motif). These batiks are often too rich to digest at close range, but they are an extraordinary visual spectacle when viewed fro a distance. Almost all Hokokai batik was made in Pekalongan in the Pagi-Sore format.*

**The batikworkshop of famous Batikmaker Eliza van Zuylen was also forced to work for the Japanese. Batik Hokokai was not only so extravagant and extensive in it's use of colours and motifs due to lack of good quality cotton, but probably also because van Zuylen deliberately stretched the making process. Sometimes they work more than a year on one sarong!** 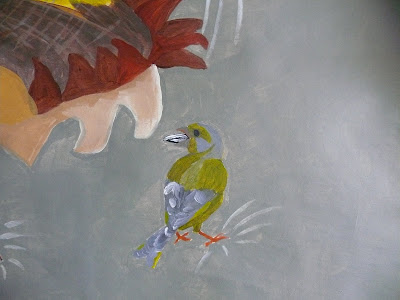 Before I started making "Difficult Time" I was reading a lot about Vincent van Gogh and his love for Sunflowers and Japan. Wanting to combine his inspirations with mine I decided to design a Batik. Not knowing the history of the Pagi-Sore Batik, I chose its format because it combines day and night, beginning and ending, life and death in one work. On the dayside I wanted fields full of growing Sunflowers facing towards the sun, on the nightside birds eating Sunflowerseeds.
I wrote 3 posts on my virtual residence about preparing "Difficult Time", I posted it later on De reis naar Batik. First post was called 'Flower of the Sun' : "The Sunflower is a much used subject in art, and maybe it should be a symbol for art and especially the artist. We grow and flourish under any kind of condition. Our ground maybe malnutrition, but we always turn our heads towards the future and better times. Art is not only beauty, it can also feed your mind and fill your thoughts. Let the Sunflower be our symbol for the survival of art and artists!".
After that "Making fabric look like paper" and "Making paper look like fabric" : "Putting the last layers of paint on the work I still didn't share fully. Only bits (birds) and pieces (Sunflowers), unfinished details, but not on my blogs.
When I'm finished painting, I have to transfer the painting on to tracing paper and send it by post to Indonesia. Where hopefully the Batik makers in Jeruk will use the design for a Batik."

At the moment my transferred to tracing paper Pagi-Sore Batik design is with Willem Kwan, the batikexpert I met during my stay in Indonesia. He will let me know if the design can be used for an actual Batik. If so, the women I met in Jeruk (near Lasem) will make the Batik! I'll keep you posted! 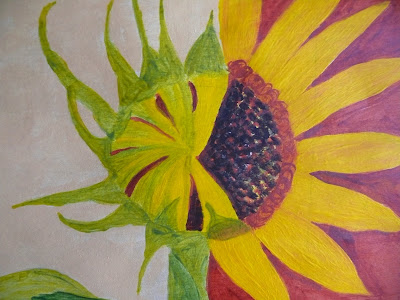 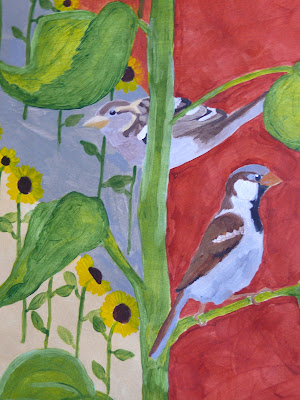 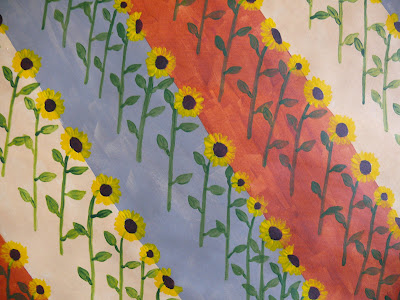