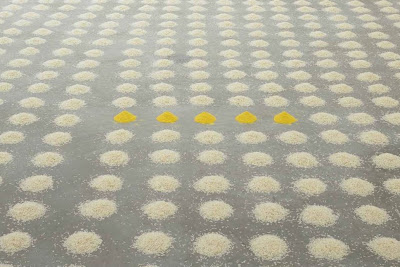 I'm celebrating my 5 year anniversary of my ricecarpets this year. Next to writing posts about Temporary art with the focus on temporary carpets, I would like to make some special projects with my ricecarpets this year. Writing and working on that, I like to start this post with a work by Wolfgang Laib. I never really understood his work until recently. I remember seeing this square on the floor of a museum made of yellow pollen. In the next room a movie was projected showing Wolfgang Laib walking in a field of yellow flowers collecting the pollen by hand. I was only thinking: 'man, what a lot of work for such a small square of pollen".

"Wolfgang Laib studied medicine in the 1970s in Tübingen. From early on he had been interested in art, foreign cultures and eastern philosophies such as Zen Buddhism and Taoism, but also for the mystics of the European middle ages.
His work may be grouped with Land Art and he shows influences of Minimalism. He employs natural materials, such as beeswax and rice. Most notable is his use of large quantities of intense, yellow pollen that he collects by hand, then spreads over large areas of floor or piles to conical heaps...
Laib considers nature as something to be experienced through the senses, but not the goal of his work; it is rather a space for activity and contemplation to point towards larger contexts."
- From Wikipedia

I know better now, and I really like this work, and what a great, strong title, "Without Place–Without Time–Without Body". And I'm just a sucker for works with rice!

In 2007 I made my first ricecarpet called "Ricebird'. I woke up one morning with the idea of feeding the birds in my garden on a way that it would also look good for me. So instead of throwing a hand full of rice on the grass I used a template and made flowers. Monday I made a new "Ricebird" to celebrate that 5 years ago, when the Forsythia was blossoming, I had the idea for my first ricecarpet. Lucky me I have a garden now with a Forsythia and my new neighbors also think I'm a bit crazy.

In 2007 my nextdoor neighbors only bother to open the window upstairs and point her finger towards her forehead. At that moment I thought it was very odd she did that, not realizing I was the one creating flowers of rice in my backyard. Later in 2007 someone throw a raw egg towards my ricecarpet. The people living there told me that the neighbors didn't like people nosing around and that they were angry that they joined this art-route. I can't understand why people get so upset about something so peaceful.
The response of the neighbors now was a little better, more curious than upset or angry, or better said more nosey.

When I first saw Wolfgang Laib's work my response wasn't any better. But it left an impression on me. I'm happy that no matter what my neighbors might think, I learned to create what is in my head and heart. And I'm happy that I have been doing so for the last 5 years! 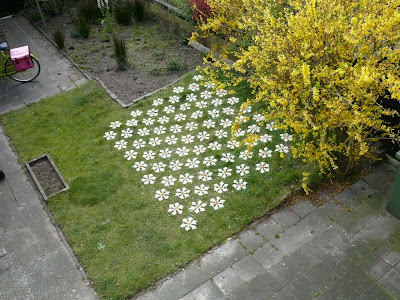 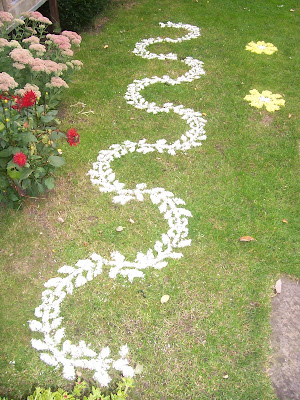 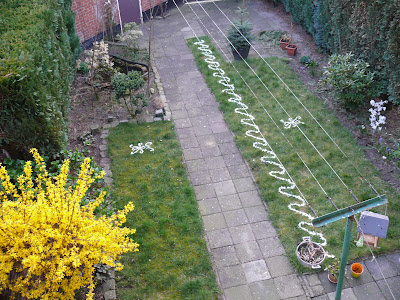