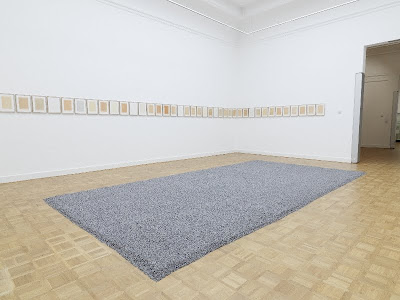 Sunday I visited the Rijksmuseum Twenthe in Enschede. My friend and colleague, with whom I'm preparing a forrest exhibition for this Sunday, has a small exhibition there with a great series of graphic works (made with stencil and dry-point) under the title "The new land".
I wasn't allowed to take pictures in the museum, fortunately the museum has a good online collection overview with fantastic pictures.

Talking about temporary carpets, Emmy told me about this work she saw there: "54 kilograms of lavender" by Herman de Vries. She and her boyfriend were looking at the work when a man wondered in and walked straight into the work. This happens a lot with temporary carpets, I know from experience. Somehow we all know that we should not touch art on walls, but when it's on floors we forget. Walking over it, feeling the material it's made of, these things occur quite frequently. I remember this artwork at the Van Abbemuseum in Eindhoven. It was made of coloured sand (I think). Someone was standing bent over looking at it, the guard was paying good attention to make sure he didn't touch it with his feet. Then he sneezed. Everyone was in total shock, I was laughing so I had to go to another room. When I looked at the work later, I couldn't see any damage to it.

The work "54 kilograms of lavender" by Herman de Vries is very strong. The smell of lavender is in all the rooms, getting stronger when getting closer. We first went the wrong way, losing the smell, but ran into some works by Richard Long!
Finding the work "54 kilograms of lavender" it was very damaged (it was also very busy that day in the museum which is a good thing). The edges were covered with footsteps and what looked like marks of hands picking up lavender. It lost its intensity, how straighter the lines, how more powerful the image is. Never the less, I liked it a lot. Also his other works are great. I didn't know his work, but he is quite the celebrity in Twenthe.

Behind the lavender carpet are framed drawings called "terre de cézanne". Every piece of paper is coloured in with soil taken from the mountain Sainte-Victoire of which Cézanne made many paintings. In the room next to it, framed leaves are on display. The leaves form a rhythm, a pattern. His works are journals. Collecting materials which by framing become a moment in time. 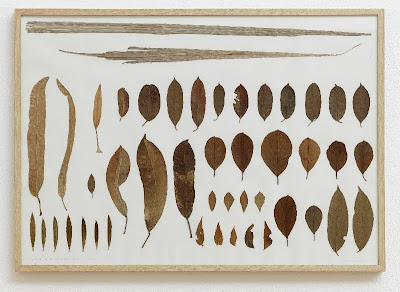 "leaves from the courtyard, hotel amritha" by herman de vries from 1977

"In his many journeys to other places in the world, however exotic or remote those places may seem to be, it is what de vries prosaically calls the 'facts' that make their way into the journals that he creates as a documentation and a record. As with the seeings of my beings, it is what singles itself out from the infinite diversity of possibilities that is caught in the frames of the journals, which are composed of random samples thus encountered in whatever place the artist finds himself at a given moment. How could any plant, blade of grass, leaf, shell, rabbit dropping or earth specimen be more significant than any other? Every natural object is like Blake's 'ev'ry bird' - 'an immense world of delight'. 'If the doors of perception were cleansed' wrote Blake elsewhere, thinking of the 'clos'd senses five', 'every thing would appear to man as it is, infinite.' For de vries, the opening of the senses - sight, hearing, touch, taste and smell - and the consequent expansion of consciousness are primary purposes of art."
-From herman de vries's website (see "journals & journeys") 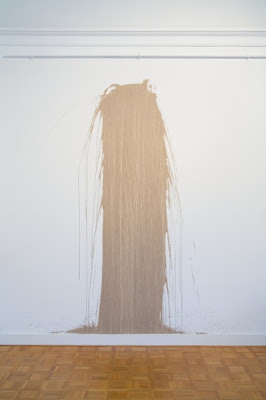 Another great capturing of time in the museum is Richard Long's "Throwing Muddy Water". Emmy told me, after bumping into his work, that there was more. I was as excited as when I was 12 and went to a Backstreet Boys concert (I was equally excited seeing Lou Reed during his 'Berlin Tour' in 2007, so don't worry).
Its a bit silly, getting all jumpy about some well thrown mud on a wall, but knowing that Richard Long made it...
It made me realize that it is a good thing I recognize artworks made by my heroes from a mile away, but probably not the makers, which hopefully wouldn't make me act like a fool when I get to meet one of them.

The Rijksmuseum Twenthe also had a more historical collection. Among it works by Jan Toorop (1858-1928). A beautiful portrait (with a beautiful frame as well) is now on long-term loan. It illustrates nicely Toorop's own style and influence by Art-Nouveau. He made Art-nouveau well-known in Holland. He designed a poster for a Delft salad oil factory. Because of this Art-nouveau got the Dutch nickname "salad oil style" ('slaoliestijl'). 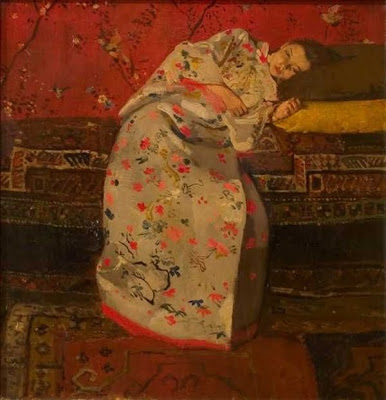 "Girl in a white kimono" by George Hendrik Breitner made in 1895, collection Rijksmuseum Twenthe


More about Rijksmuseum Twenthe on www.rijksmuseumtwenthe.nl

More about Emmy Dijkstra's exhibition in Rijksmuseum Twenthe on www.emmydijkstra.nl (in Dutch)