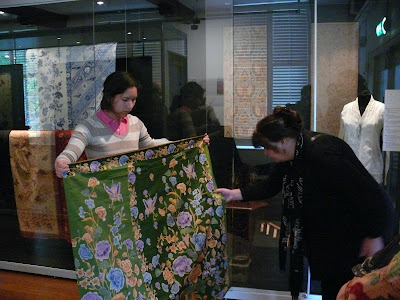 Louise shows a batik that was worn by her grandmother

With my blog De reis naar Batik I write about Batik and other forms of art that interest me. Because my reach with blogging is limited, I try to come up with ideas to do more and different things with sharing my interest in Batik.
Louise Rahardjo, Assistant curator of Museum Nusantara, who I interviewed for De reis naar Batik (see Interview with Assistant curator of Museum Nusantara), told me she did a lot of research about the Batiks on display at the exhibition '"Sarongs van naam. Design in batik 1880-1940"' at Museum Nusantara in Delft. There was much more to be told then could be shown at the exhibition. I asked her if she wanted to give a guided tour sharing this information. 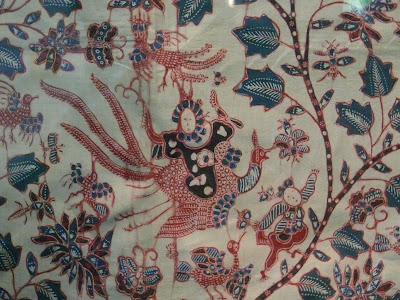 Batik with Chinese fairy-tail about a God riding a phoenix

On Thursday she give a tour at Museum Nusantara. I invited some people, we were with a small, but interested group. I'm planning to organize more of these kind of trips. Maybe in the future: "Batik daytrips in the Netherlands by the Journey to Batik tour operator!", but for now, if you are interested to learn more about Batik and live in the Netherlands, send me an email (see 'About me'). I will keep you up to date if I organize something like this again! 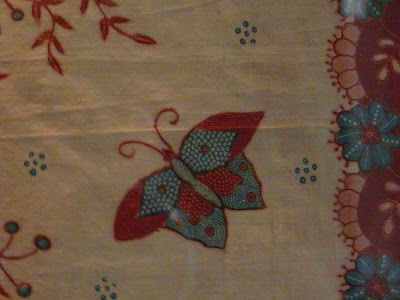 Batik from around 1890, signed by Wed. Jans, Pekalongan 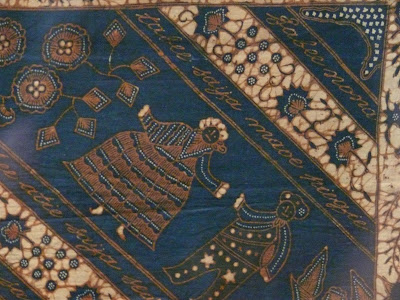 In this Batik a love poem is written. It appears to be written phonetic. At the time most Batik-makers were illiterate. They copied the text from handwritten papers which makes making mistakes or misspelling easy.
There are examples of misspelled names of important Batik entrepreneurs, also revealing copycats. Some important Batik entrepreneurs, like Eliza van Zuylen, only signed a Batik herself after she approved it.
When men had to leave for work (or to return to the Netherlands?) they gave this type of Batik to their sweetheart. 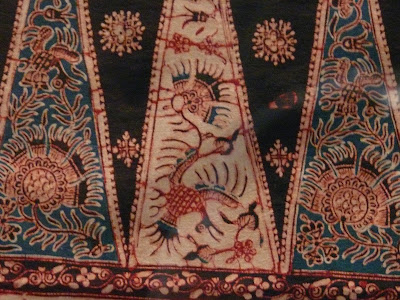 Detail with a phoenix

It was interesting to be at Museum Nusantara with different generations. Johanna and Corrie learned the names of all the islands of Indonesia on school. People had just returned from the Dutch East Indies and still believed they would return. Later our Indonesian history became the past, a sore past that was buried on attics and in basement.
Like Chester said, we have been in Indonesia for over 350 years. And not all was bad. Louise told us that now the younger generations unravel this history. She met with Rens Heringa, textile specialist and author of 'Fabric of Enchantment', who told her that she was receiving more requests by people asking to look at Batiks they found. Grandchildren find Batiks in boxes on the attics and in the basements of their grandparents who passed away. Not knowing about this heritage of us, they sometimes throw important parts of history away. Fortunately a lot of people know the way to places like the Tropenmuseum and Museum Nusantara to ask what it is they found. Batik Belanda is still pretty unknown in the Netherlands. Good thing more people are getting interested in this part of history, and not only people with Indonesian roots, but also the Belanda.

Do you want to learn more about Batik Belanda, the exhibition "Sarongs van naam. Design in batik 1880-1940" at Museum Nusantara in Delft will be prolonged till October. Louise Rahardjo, Assistant curator of Museum Nusantara, will give guided tours explaining more about Batik Belanda and the Batiks on display.
More information about the guided tour on www.nusantara-delft.nl (in Dutch and send an email to join the guided tour).

Also Louise Rahardjo will be giving a lecture about Batik Belanda on the Tong Tong Fair in Den Haag. On Monday 21st of May in the Bibit-Theater at 14.30h. It's going to be a Batikfull day at the Tong Tong Fair that monday with workshops making Batik and how to wear a Batik. There is an exhibition with photos of visitors showing their Batiks and the story behind it.
More information on www.tongtongfestival.nl.