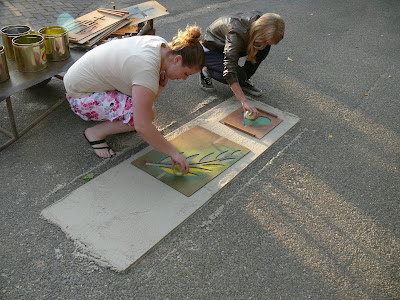 Saturday I went to Klimmen (provence Limburg). I knew that there would be a procession, 'De Grote Bronk' on Sunday morning with flower and sandcarpets (read more on www.sabinebolk.nl/2011/12/de-reis-naar-batik, in Dutch). I didn't know what to expect, so on Saterday I walked around asking people if and where the carpets would be made. I asked at Dolberg if it would be okee if I joined them the following morning to document the making. They planned to start around 5.30h, so I agreed to come around 6h.
I went to bed early and waited that morning for the harmony. The 'schutterij' marched on the day of the procession through the streets waking up the inhabitants of Klimmen so they can start making their temporary carpets on time. I was clearly the only tourist in town and it was special being on the empty streets while the sound of drums echoed on the walls of the houses. I walked a bit behind them towards Dolberg, where the makers were already quite far with the sandcarpets. 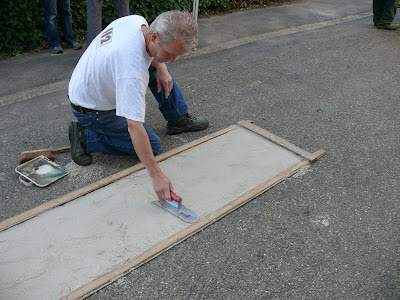 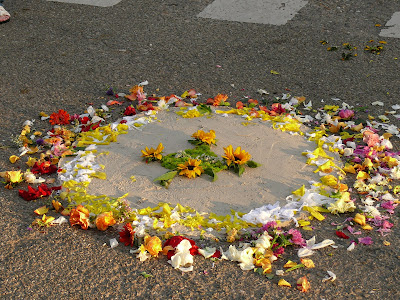 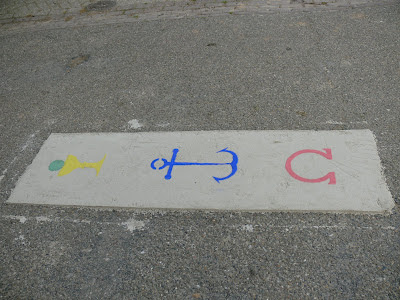 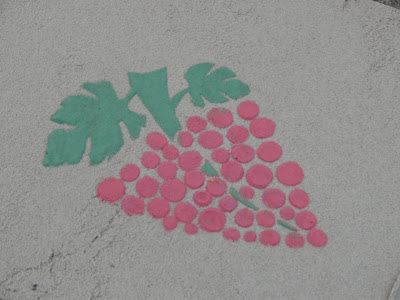 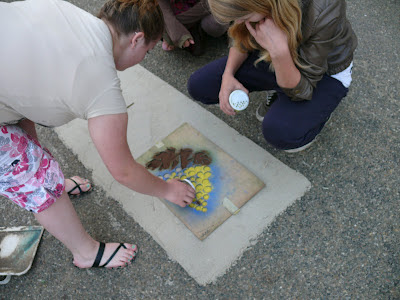 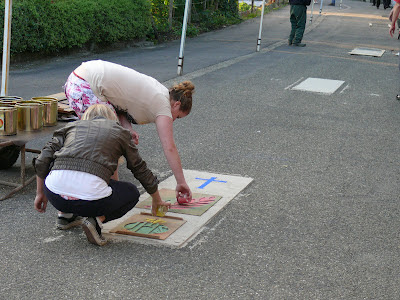 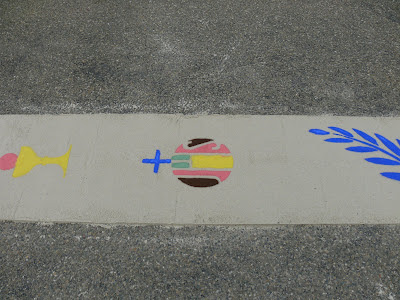 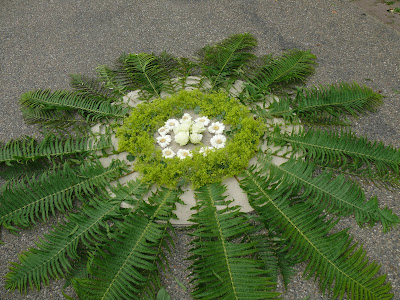 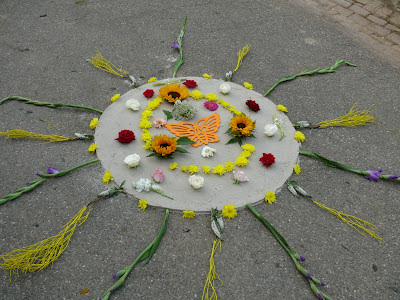 Around 7h I decide to check out the rest of the procession route to see if there where more temporary carpets being made. I was totally surprised when I stumble upon this meters long sandcarpet on the Achtbunderstraat. Being without a neighborhood association they just put some flyers door to door asking people to join making the carpet. A nice big group started that morning at 5h and they were almost finished when I got there. They responded really enthusiastic that I was there to document the making, no one does that, everyone only makes pictures during the procession, they told me and I even got to take a picture from upstairs! 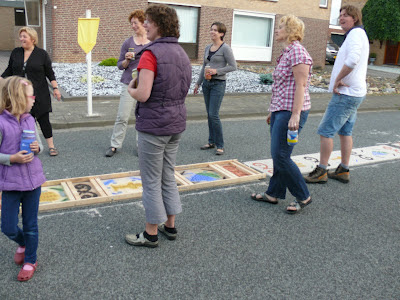 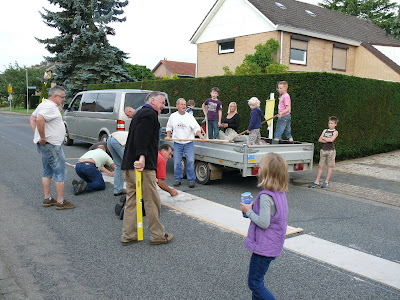 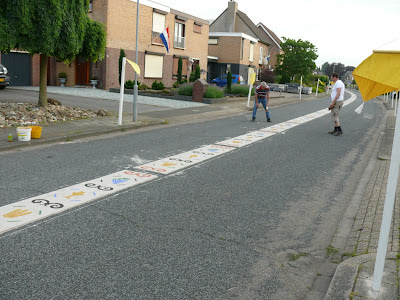 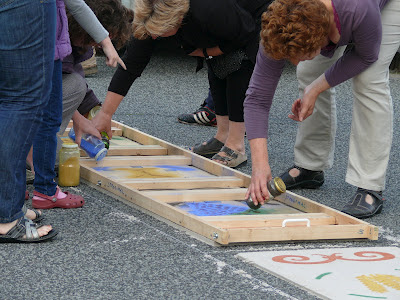 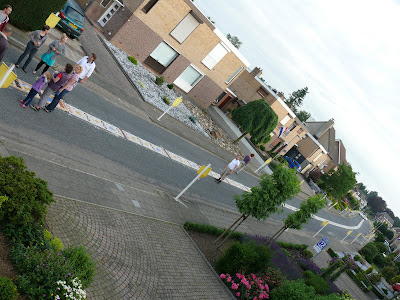 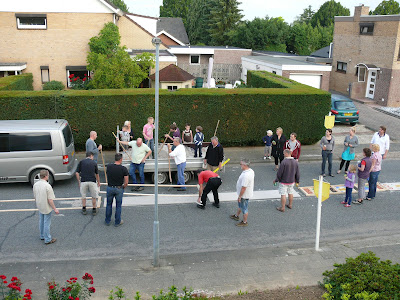 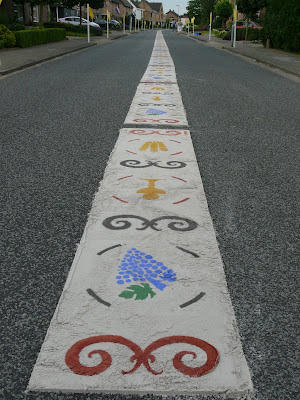 I headed back to Dolberg for some more pictures and some coffee with pie. This great little bar just opened there (Grand opening on 14th of July), Achterum, a resting point to enjoy some pie ('vlaai') with a very pretty view. After the welcome breakfast I walked towards the church. On my way there I met some people I spoke with the day before, making flowercarpets before their house.
At the church everyone was getting ready for the procession. "Hey you're the girl that got up at 6h to make picture of the sand-runners ('zandlopers')!". Because I didn't want to miss the priest walking through the carpets, I walked (ran) back again towards Dolberg. In my next post more about the tradition of 'De Grote Bronk' and pictures of the procession. 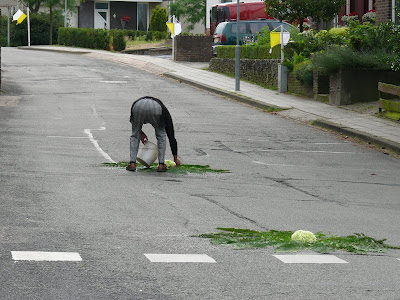 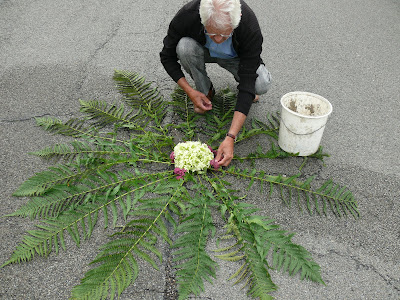 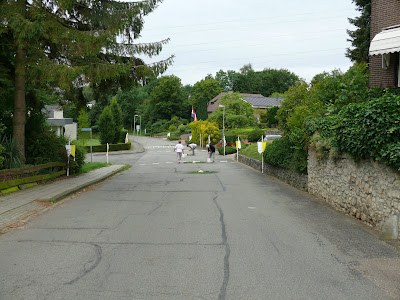 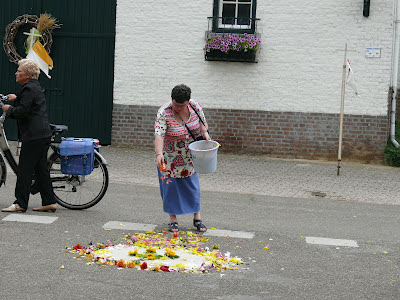