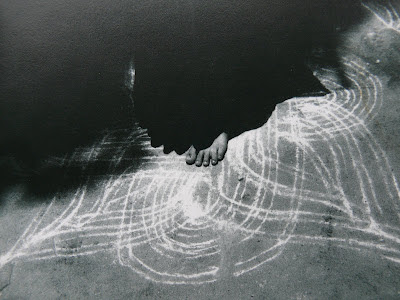 Koen de Wit, clarinetist I'm engaged with :), is working hard towards his release of 'Narziß und Goldmund' (Read more about it in "The making of Narziß und Goldmund"). For finding the right paper for his album-cover, some ECM covers are laying next to his computer. I ask him if he chose that one on purpose, but he had not yet noticed the bare foot in the temporary carpet, like I did.

"The light touch of foot-soles as a woman dances at the centre of the ritual maze, a fragile flower with petals of chalk, a propitiatory choreography traced each morning on the ground.  As if in echo, the faint coughing of a white tiger from the zoo nearby. Rustlings, variations, in persistent notes that extend through the air and disappear into the night. Silences and erasures. A few magical movements will make both the pattern and the music reappear on the doorstep at dawn to greet the ephemeral beauty of the new day. Black the dress, black as as a monsoon cloud suspended over those white furrows, alreadyworked, henceforth fertile: Monodia..."
- Muriel Olesen (photographer of ECM cover 'Monodia')

In my previous post 'Harmonious co-existence' I shared some beautiful pictures (scans from my rice-bible 'The Art of Rice') of Alpana.
Alpana is a sacred art in India, in which drawing are made using rice powder on floors in front of houses and around altars. It is known under different names, in different areas of India, most common 'Rangoli', 'Kolam' and 'Jhoti'. The word Alpana is derived from the Sanskrit "alimpana", which means "to plaster" or "to coat with".

* A compulsory aspect of Lakshmipuja (**is performed during Diwali, the festival of lights. Diwali marks the end of the harvest season in most of India) is the alpana drawn by women...These paintings are made with rice powder mixed with water (**for special occasions limestone and red brick powder for contrast are also used. Modern interpretations have accommodated chalk, and ready-made rangolis of wood, plastic templates and vinyl stickers). There are several motifs that are drawn on the floor around the deity's altar. The motifs are stylized in characteristic ways and incorporate certain patterns associated with Lakshmi such as the lotus, Lakshmi's feet, Lakshmi's companion owl, **the sun, a ladder, a plough, a fish, betel (the leaf of a vine belonging to the Piperaceae family, which includes pepper and Kava), shankhalata (a snake) and sheaves of rice. The alpana represent the world of the goddess and brings good fortune to the home.

** Lakshmi is the Hindu goddess of wealth, prosperity (both material and spiritual), fortune, and the embodiment of beauty. She is the consort of the god Vishnu. Also called Mahalakshmi, she is said to bring good luck and is believed to protect her devotees from all kinds of misery and money-related sorrows.
In Bengal, Lakshmi is worshiped in autumn when the moon is full, the brightest night of the year. It is believed that she showers wealth on this night. She, along with her mount, the great white owl, descends to Earth and takes away the darkness of poverty, stagnation, anger, and laziness from our lives. Her vahana owl represents royalties, penetrating sight and intelligence.

Making alpana is considered an important part of the spiritual process. * Not everybody can do alpana, those who can are considered special and admired for their artistic quality. There are rules to be followed making rangoli or kolam. In front of houses the patterns made should be closing, so that evil spirits can't enter. It is best to make the drawing without pausing or lifting your hand to far from the ground. In some places the kolams are made everyday, in other places only during special occasions like marriages and rituals.
** It represents a philosophy of life that enthusiastically celebrates the impermanence of knowing and devotes itself to a constant wish to live in the present.

Worshipping Lakshmi isn't just about doing rituals, it's about making a nice home for your family and guests, being creative and fulfilled with what you got. This will bring you happiness and therefore fortune.
Just to be sure I made a little owl with a swastika and sun/moon behind it in my ricecarpet yesterday.