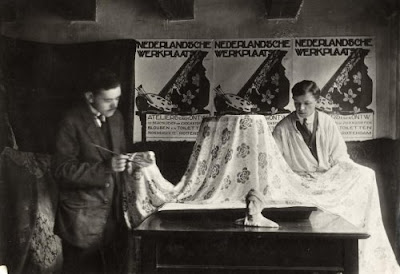 Came across this very interesting picture when I was looking for the Corps Diplomatique photos (see previous post 'Get your national gear on')***. In the description it says: "Two men are making Batik on silk. On the wall a sign with 'Nederlandsche Werkplaats'. Rotterdam, The Netherlands, 1918.".
The next picture was of a man in the same workshop, with the same poster on the wall, appearing to use a canting. If this is so, it's a really unique picture, because man don't use canting (on Java), so photos of man batikking with cantings are very rare.
On the other hand, making Batik was a quite trendy during that time **. In the Netherlands we had our own version of the Arts and Craft movement called Nieuwe Kunst. Artists like Jan Toorop and Gerrit Willem Dijsselhof were inspired by Batik and many Nieuwe Kunst artists, like Bertha Bake, made Batiks themselfs.

Although the Art Movement ended, or faded around 1915, it is more logical that the men on the picture represented that movement instead of De Stijl (started 1917).

The pictures are taken by photographer P. van Tol. If you search on his name in the Nationaal Archief (gahetna.nl), you find many wonderful, almost time capsules of workshops in he Netherlands in the beginning of the 20th century.
The poster is made by Rens Rossel. His signature is on the right corner. Found the poster online in the archive of Gemeente Rotterdam. The full text says: "Dutch workshop/workplace. Studios, own design to paint on silk fabrics. Wijnstraat 68, Rotterdam". Couldn't find more about the workshop or the location. It's all new buildings on that street, so probably it was bombed during the second world war. Rens Rossel also made a poster for a flower-exhibition, after that the archives run dry.

In 1918 an exhibition was held in Rotterdam 'Tentoonstelling van Kunstnijverheid en Volkskunst' (Exhibition of Arts and Crafts and Folkart). A lot of the participants, mostly female , who joined the exhibition made Batiks *. Maybe the men made this pictures for the exhibition or to advertise their studios.

This is all the information I could find by googling online and in my head. I hope to find out one day who these men are and if there are still hand painted silk fabrics by them out there. If you have any tips or ideas about this, let me know! 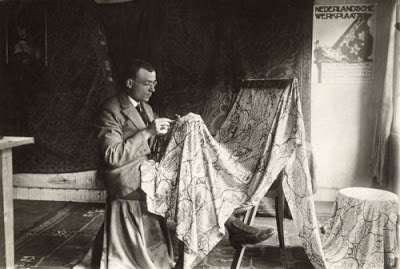 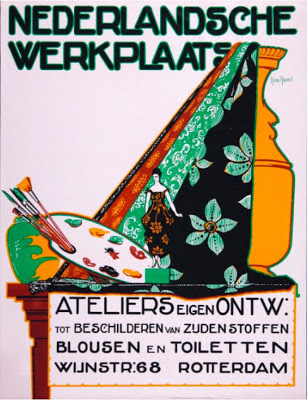 * From the book "Vrouwen in de vormgeving in Nederland, 1880-1940" by Marjan Groot
** See post 'Little Red Riding Hood, where are you going?'
*** Photos of men making Batik are from the Nationaal Archief, http://www.gahetna.nl/

Thanks and looking forward to your finds!
If you find anything about this let me know!