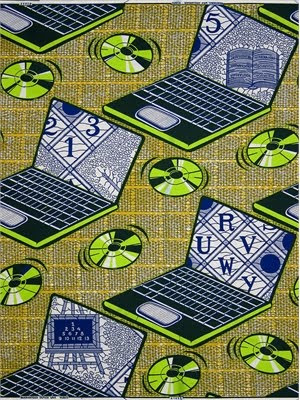 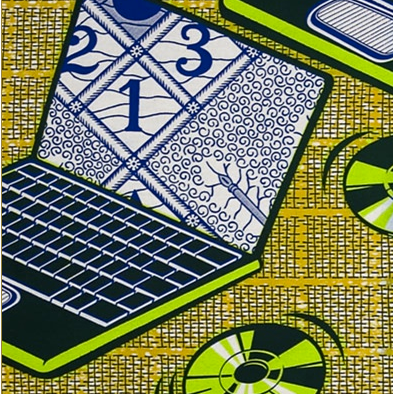 Monday Vlisco will launch a new campaign named "Jeu de Couleurs", jippie! In the first preview on Facebook there is a hint that more electronics patterns are going to be add to the Vlisco collection. With everyone touching their phones in public, it's not strange that electronic devices are getting also popular to wear as a pattern.
In 1905 they thought different about modern designs. Apparently a line of Wax Block Prints was introduced in Indonesia and wasn't received well. The products had prints on them of locomotives, ponds with swans and upside down lanterns. Maybe to modern then, but love to see one of those patterns today on the streets****.

The screens of the laptop patterned Vlisco show a real classic. The Alphabet ABC pattern is worn by people to indicate that they went to school and know how to read and write. They also attach importance to a good education for their children, and they set aside money to provide for it***. If the laptop print will hold the same meaning as the ABC I don't know, but I do like that they updated the design to make it more now. 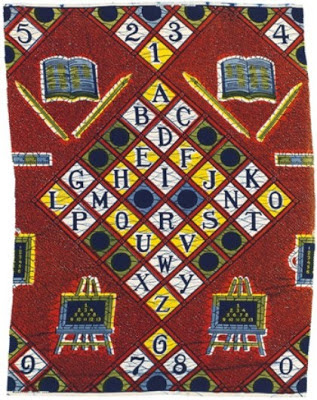 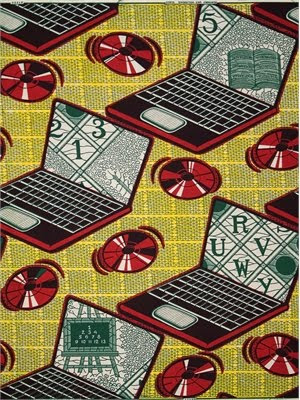 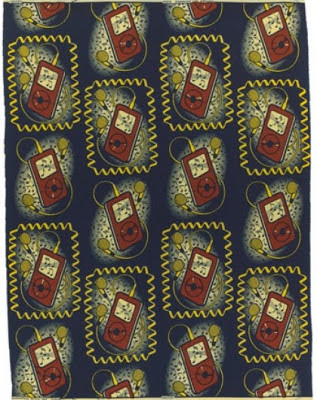 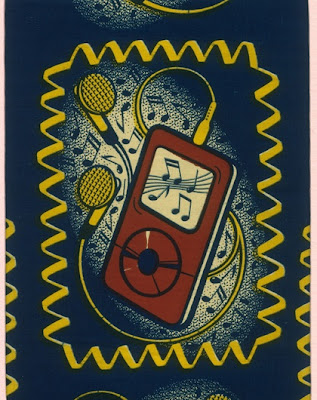 The impact of the new technology on daily life is exemplified in this Ipod-pattern. It was immensely popular in Nigeria***

This trend of putting electronic devices on cloth is not just found in the Wax Block Prints by Vlisco. Even in the traditional kentecloth mobile phones are woven.
Kente cloth has its origin with the Ashanti Kingdom, and was adopted by the people of Ghana and many other West African counties. It is a royal and sacred cloth worn only in times of extreme importance and was the cloth of kings. Over time, the use of kente became more widespread. However, its importance has remained and it is held in high esteem in the Akan family and the entire country of Ghana**.
Although the Ewe (pronounced "Ev-ay") are not as well known outside Ghana as the Ashanti they also weave many of the cloths known worldwide as kente. In fact many collectors regards Ewe textiles as the highest expression of African weaving artistry. Ewe people live around the Volta delta area of south eastern Ghana and across the international border in Togo. Ewe weavers work primarily for sale through markets and to fill orders from important local men and women. Today Ewe weavers are concentrated around two towns, Kpetoe and Agbozume, with the latter the site of a large cloth market which draws buyers from throughout Ghana as well as neighbouring countries*.

Looking forward to the new Vlisco campaign, hope new classics will be born and that they also made some computer illiterate designs! 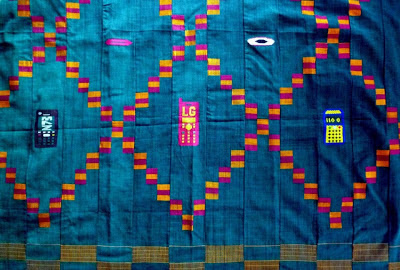 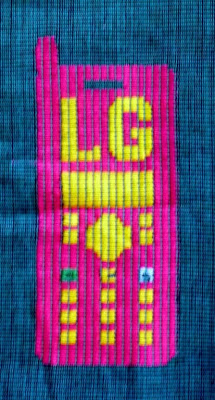 
* From Adire African Textiles . Great blog about Adire Kente Cloth!
** From Wikipedia
*** From Vlisco Stories
**** From 'Javaanse Katoentjes' by Rens Heringa in the book 'Katoendruk in Nederland'
***** See post 'Leaving a mark' for more about kentecloth and Vlisco