A house filled with Indonesia 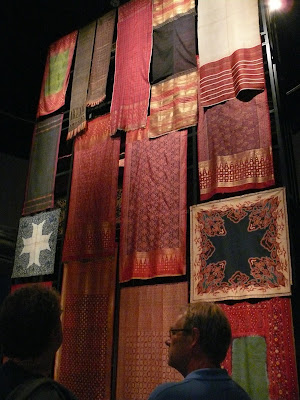 Wall filled with ikats, batiks and other fabrics from Indonesia

A short heatwave made blogging a little bit of a challenge, more for my computer then for me, but still, it has been too quiet on De reis naar Batik.
Two weeks back me and Koen went to the National Museum of Ethnology (Rijksmuseum Volkenkunde) in Leiden. Eversince I found an article about the "spectacular donation"* by deceased Fritz Liefkes I have checked their website monthly. The former conservator of the Rijksmuseum in Amsterdam left them a collection of 750 artifacts from Indonesia mostly from between 1850 till 1950. His only demand was that they made a special exhibition of his collection. And they did!

In the weekend we went, the museum had special activities like making a Wayang doll workshop and Balinese dance. The Balinese dance demonstration was done by the brilliant group Sinar Bulan**. With a lot of humor they explain the differences between Javanese and Balinese dance, show different costumes and make it very accessible. On the end of the day they showed different mask dances from Bali. During the last dance the dancer transformed into an old man. The mask with long grey hair looked funny at first. With her movements she told a story of the difficulty of growing old, really strong and inspiring to see.

The Liefkes collection, a collection build with love, consists of many different objects from very different places. Gold was clearly his favorite material. Next to beautiful jewelry, he owned 450 fabrics of which many were decorated with the prada technique (gold lines on top of Batik patterns) or are embroidered with gold thread.
The entrance of the exhibition started with a great wall full of cloths. A brilliant way of showing them. A simple steel construction and magnets, but what an effect. I was so jealous, but I also realized how great it was that he collected all these beautiful things to later share them with us.

I made a lot of pictures, and still I wish I could have visited the exhibition again. You see so much at once (and it was pretty busy, and that is pretty good) that you miss details or forget to make a picture of a Carolina von Franquemont batik from around 1850, shame on me...
Anyway, enjoy the photos and make sure to visit the museum. They have a great collection, it is a big museum so make it a day to check it out. Me and Koen could only see the Liefkes exhibition, Fetish Modernity, Indonesia and we ran through Japan, China, Korea and Oceania, so we missed the whole of America, the rest of their Asia collection and Africa! 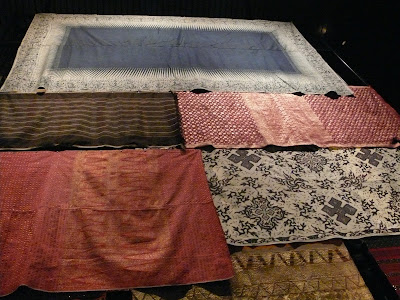 Other side of the wall, also filled with beautiful fabrics. The upper cloth is a ceremonial batik, kampuhan. From the edges filled with trees and chicken, lightning strikes the blue middle part. The middle doesn't represent the night sky, but the balong, the fishpond every acreage On West Java has*** 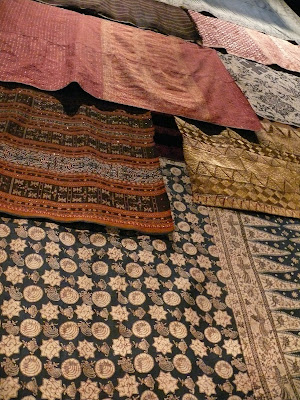 Undermost cloth, a sarong for men. The dark blue batik like a night sky is filled with eight-pointed suns in which the Muslim proverb "Piring aji" is written, next to full moons with a bird in them. It stands for the arrival of Islam*** 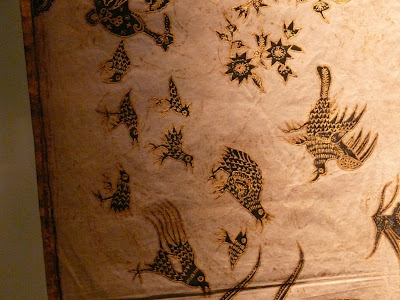 Detail of chicken on a krudung or mirong, head or shoulder cloth, with prada. Style influenced by Pekalongan. From Cirebon, 1875-1900*** 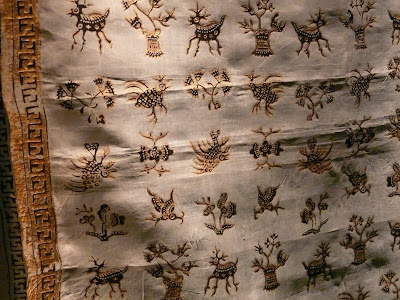 Batik with prada on Chinese silk, the different animals are symbols for all life in the universe, "alas-alasan". Cirebon, 1875-1900*** 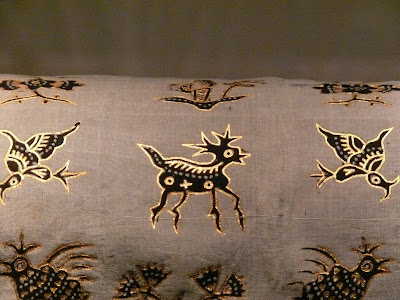 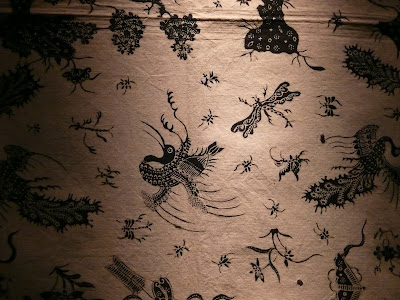 Batik filled with symbols for fertility. The butterflies stand for long life. The medallions with a flying pair of birds stands for heaven, see next photo*** 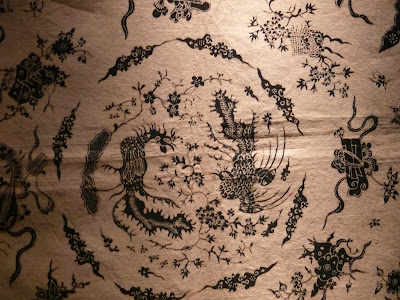 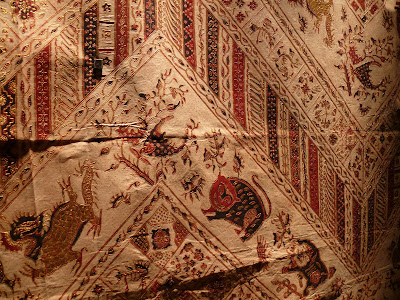 This kain panjang dlorong or obar abir, hipcloth was probably a weddinggift for a Peranakan bride. The cloth is filled with Chinese mythical creatures like the qilin, a gentle animal with hoofs and scales like a dragon. Cirebon, 1860-1875*** 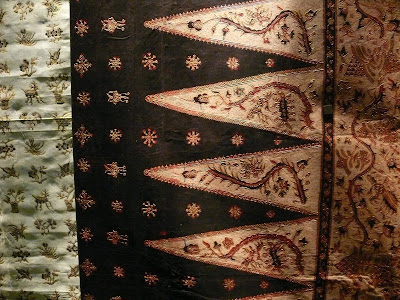 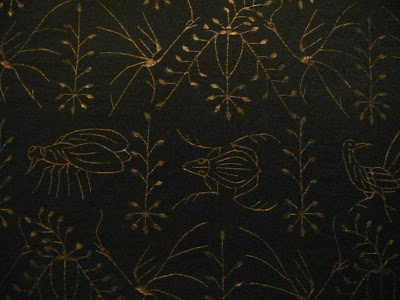 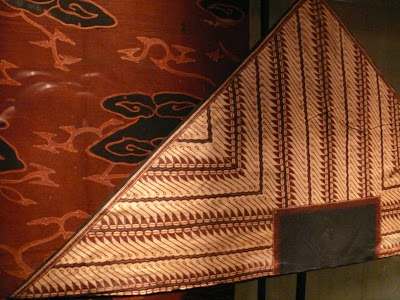 Sigar with aristocratic male motif made by Raja Aluda Tajularifin, wife of Sultan sepuh XI, during her pregnancy to wish for a boy. The red batik behind it is probably a langit-langit, used to hang above the weddingbed. The paper label on it was probably written by none other than batikexpert Gerrit Rouffaer (1860-1928)*** 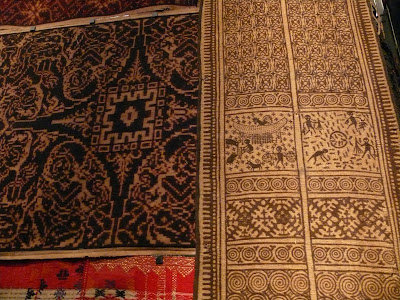 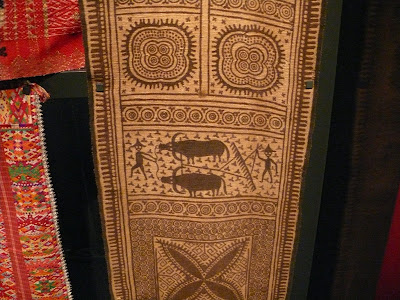 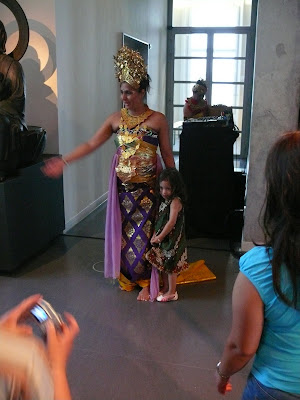 More about the exhibition 'A house filled with Indonesia' on www.volkenkunde.nl