Take some elsewhere, and let some come back to me 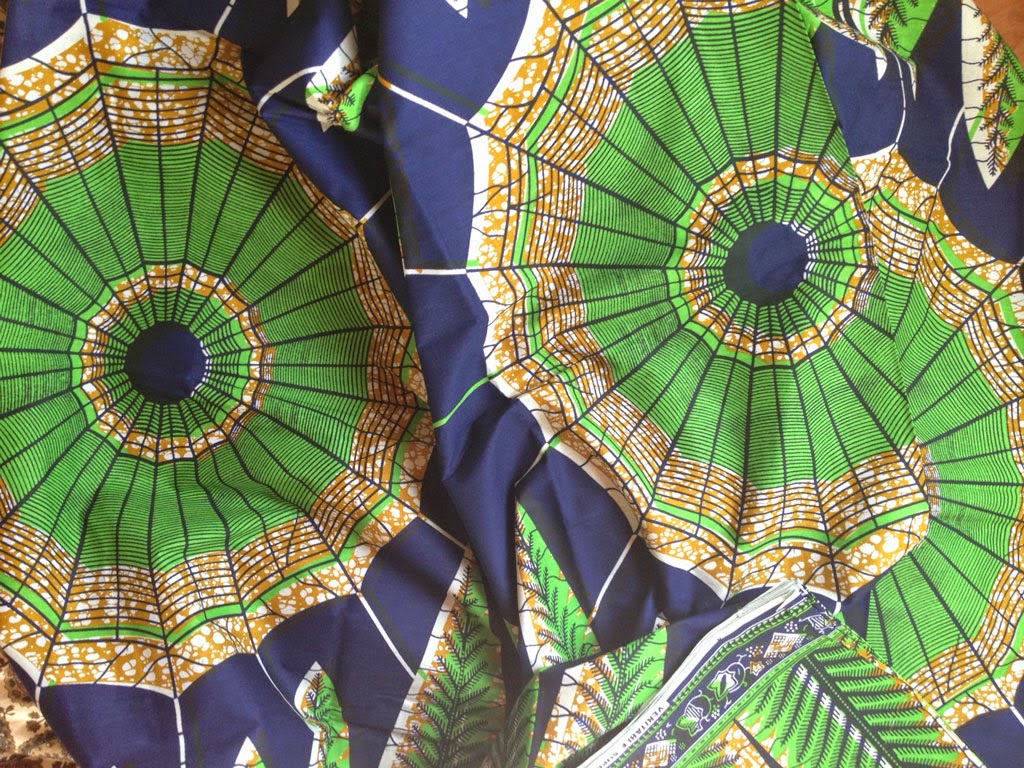 Textiles tell stories. Their colour and symbols, or sometimes their history. My little collection of textiles is more an collection of stories. Every cloth holds a memory, where I got it and who made it or wore it before me. Sometimes the story even persuades me to buy the textile. A lot of times this happens to me with the Vlisco stories, and also when I visited Helmond in December...

This story started a while ago. A message arrived in my inbox from Italy. A photographer was going to spend her holiday in Eindhoven. Being a big fan of Wax Print she was hoping to buy some for a project she was going to do for her thesis.
I gave her some information, and added that if she needed some help on the day she was going to Helmond, I was happy to join her on her Wax Print quest.
When December was almost getting to an end, I got a new message informing me that she and her boyfriend were staying in Eindhoven and planned to go to Helmond the day before New Year.
The roads were covered with ice that day, but somehow the train got me to Helmond.
A very cute girl and boy came out of the same train as me. I felt a bit silly with my big purple coat and silly woolen cap, but they felt uncertain about their good English, so I just started talking with them and heading towards the new Outlet Factory Store of Vlisco we all fell more at ease soon.
I had not been at the new store yet, and was a bit sore about it before, spotting someone on Instagram in the coat I dreamed of owing one day. That, combined with entering and being told that pictures weren't aloud, not even outside...made me a bit disappointed about it. I missed my favorite French saleswomen and after explaining that my Italian companions especially travelled to Helmond to buy wax and just got an 'okay', I fell a bit out of love. 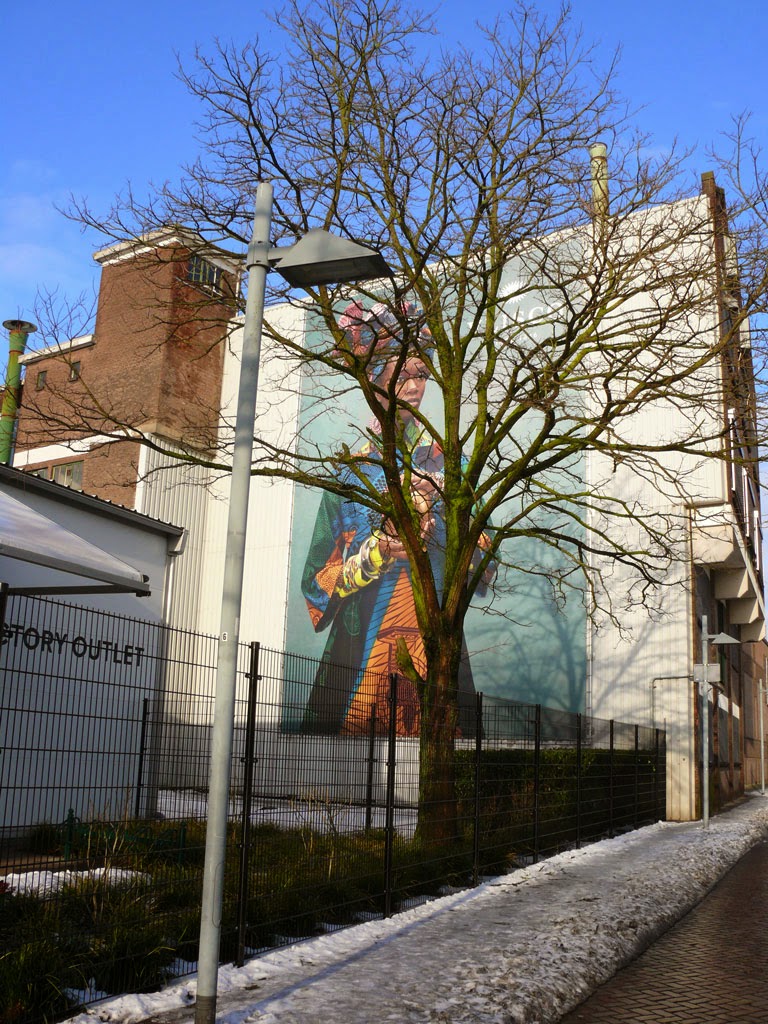 
Fortunately the Wax Print Tour wasn't over yet and after a long slippery detour looking at the amazing, weird Cube houses, we arrived at Jansen.
The white door with a small Enter-sign to enter a greyish building in the middle of a industrial area, doesn't make you suspect entering an African market filled with piles of colourful cloths, including African women making business deals loudly.
I felt a comforting satisfaction coming over me seeing that not much had changed, yet what did change was surprising and lovely. The entrance was now a small Vlisco store, with the newest collection and even with a special European Super Wax edition which made me fall totally in love again.
After a short search, enjoying all the patterns and colours,  the photographer found a perfect pattern for her thesis project and bought the right amount of yards she needed. I hope to tell you more about her project, but for now I will keep it hush hush.
After the buy our ways parted. Finding my path on the slippery road towards the station, I spotted another wax print store. 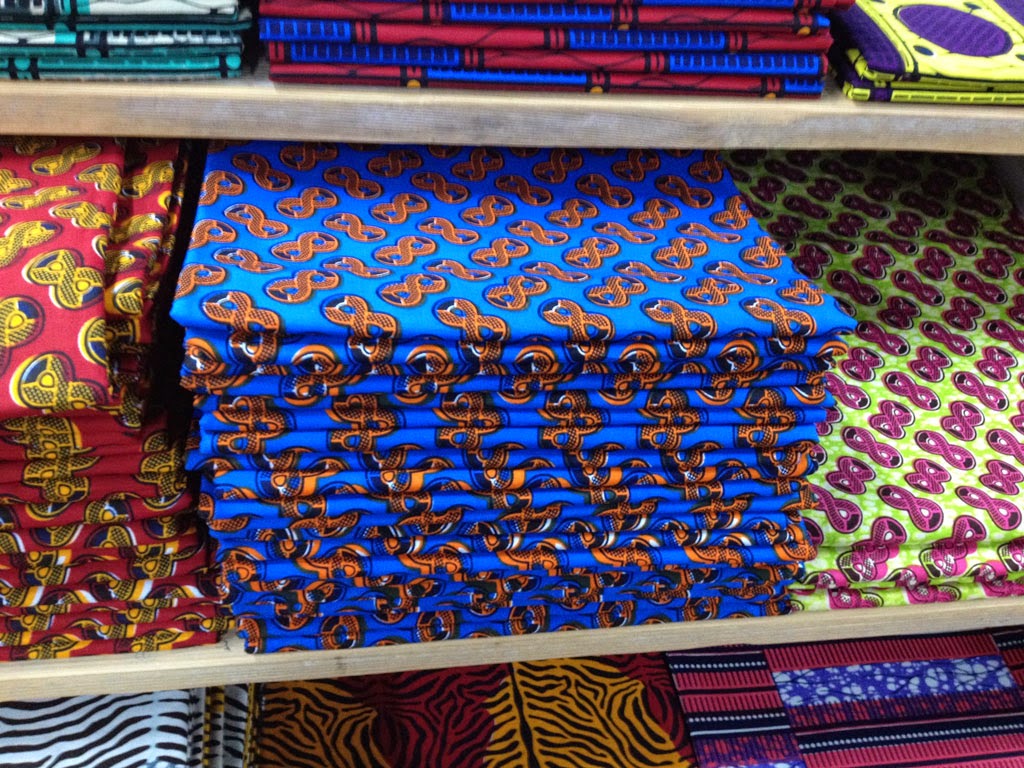 
Happy to get out of cold and always in for looking at more patterns, I entered the store. Rectangular framed iconic Vlisco's covered the walls and two racks were packed with wax prints. I explained to the store owner that I never noticed his store before and that I was happy I finally did. We started talking about Vlisco, his own wax prints Supreme Wax Holland and the stories they shared.
He worked for many years at Vlisco and knew so much about the stories the textiles narrated. He showed me their own original wax prints, a cheaper version, with sometimes a mix of patterns I recognized from Vlisco. They weren't all copies, more a mixture of iconic parts from other stories combined into a new tale. His stories impressed me and when he showed me his favorite textile, I knew I needed to have it.
In the center of the cloth was a huge spiderweb surrounded by leafs with a misprinted strip full of unidentifiable symbols. The cloth was dyed in a bright green with a white wax spotted beige on a very dark blue.
He told me it was one of the most popular patterns in Ghana and use to be a original motif of Vlisco that they didn't make anymore... It was called 'Anansi'. A story about a spider that is friends with everyone. The story was known everywhere from Ghana, to Suriname and even in Amerika.
I never heard that name before and was overwhelmed by his enthusiasm.
With another addition to my collection of stories, I headed home and a few days later I googled 'Vlisco Anansi'. Getting no striking results at first, I did find an interesting passage in a book online. 'Anansi' was mentioned in a book with the title 'Indigo, In Search of the Color That Seduced the World'. And that was just the book I was looking for. 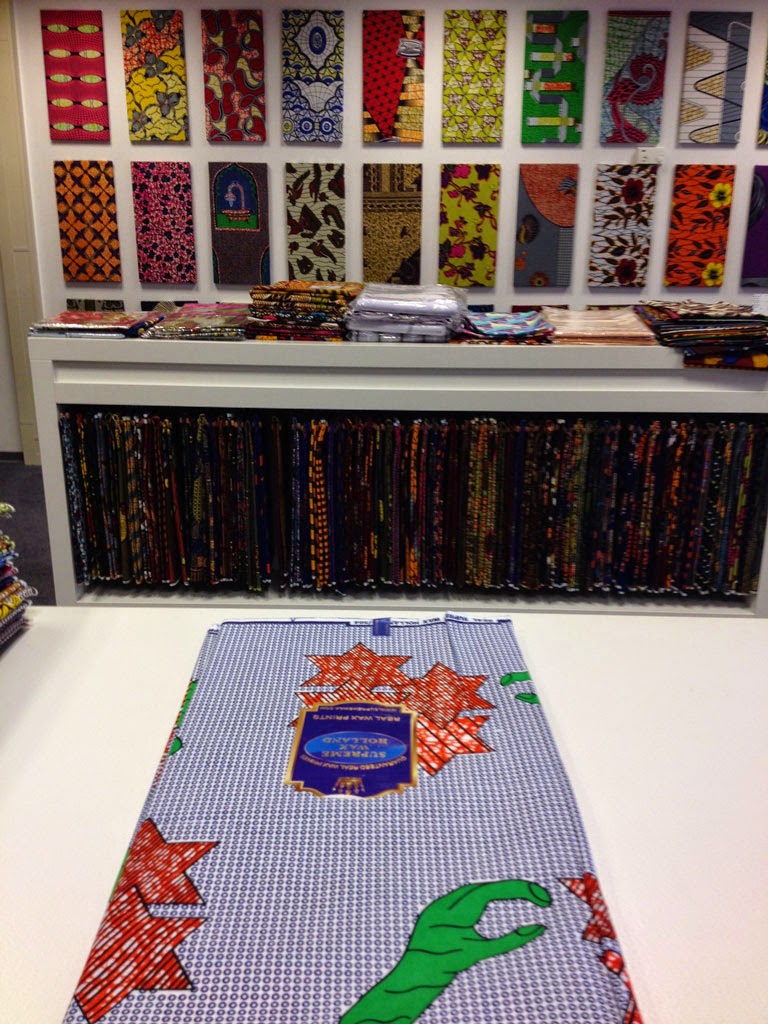 
Halfway through 'Indigo' a fellow collector explains to Catherine why she collects beads. "For me it is not a collection of beads, it is a collection of history of others, a marking of time, of the things we shared. It is not about the beads, but the life they represent". Reading this sentence I knew I did the same. And I laughed on how I needed to have this spiderweb cloth, that I will probably never dare to wear.
Not finding the story on the Vlisco stories site, I continued googling and finding myself lost in the world of storytelling.
"We do not really mean, we do not really mean that what we are about to say is true. A story, a story; let it come, let it go... This is my story which I have related. If it be sweet, or if it be not sweet, take some elsewhere, and let some come back to me."

Anansi didn't turn out to be just a friendly spider, it turns out it was THE art of storytelling. It is a tradition practiced, probably for as long as man walks the earth, and was passed along the colonial route not only to Suriname and America, but also to the Netherlands.
Watching clips on Youtube of Anansi storytellers I felt stupid and ignorant. And I want to apologize if my knowledge of colonial history is limited and petty-minded. I'm trying to get well informed and correct me if I do not have all the facts.

Anansi the spider is not know for his friendly character, but for his witty and clever character. The stories can be old ones explaining how the power of storytelling began or how Anansi is trying to fit in in the Bijlmer neighborhood.
Anansi is clever, but he is also focused on power and wealth. His way with words makes his famous and turns his life into a rollercoaster of bad choices with surprisingly good outcomes. Making him the one getting the better deal at the end.
The tradition of storytelling travelled through the colonial history giving power and freedom to the oppressed. In the stories the oppressors could be laughed at, without them knowing. Clever, witty Anansi always beats them in their endless quest for power and wealth. Making him a mythical resistance fighter.

Two weeks ago I found myself at the studium generale of ArtEz wondering if I was a storyteller or an artist. A lot of dots connected and yet no straight road ahead revealed itself.
I just crossed on some things on the program that I wanted to see, realizing that they were all what I needed to hear.
Charl Landvreugd was to short on stage, but in the few minutes that he explained his project for the Tropenmuseum, I felt so happy that I bought the Anansi cloth.
"A conversation about memory, forgetting and Landvreugds performative revival of rituals of keeping memories alive where written histories fall short". I knew what he was talking about, I knew what the storytellers part was and why the singing women were dressed in blue wax prints. I didn't know everything, but I knew this is what I want to do with my work, with my blog and with my time.


Anansi stretched his eight legs as he sat in the middle of his web, watching the people around their fires in the evening. They were restless and the children were bored. “How can I help them?” Anansi said to himself – he rather liked people, being one himself sometimes. “I know, stories! They need stories to tell and to listen to… mmm” he thought.

He knew that all the stories were kept in a beautiful wooden box by Nyame, the Sky God. He also knew that Nyame kept the box close to him at all times. For this, he would not be able to use trickery and sneak it away from the Sky God.....