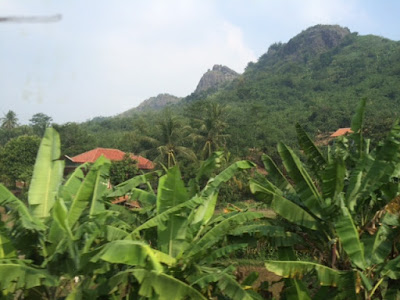 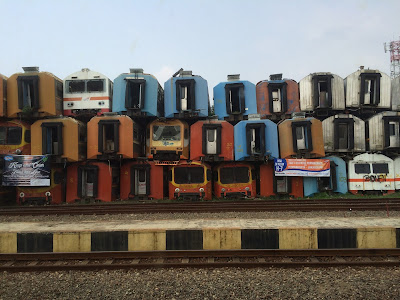 Photo of Rumah Ebo and traveltip from me, take picture of where you're staying, so you will find your way back

After a train ride through impressive landscapes I arrived in Bandung. It was raining again very hard, so I hope this won't become a trend for my ongoing travels.
I had booked a room at Rumah Ebo, a small guest house with a beautiful garden and limited luxury. A big adjustment from the POP! Hotel, but a very welcome one.
After a short night rest, I went to 'Spatial',  a factory building which is turned into creative office spaces for fashion. I was off to meet Muhamed Lukman, Chief Design Officer of Batik Fractal.
I was so happy Batik Fractal wanted to be part of my project. I asked to learn more about JBatik and after an introduction on the software, I gave it a go myself. The program is surprisingly easy to use and I think it can be very handy for Batik makers ones there designs are in the database.
The patterns I played with had for me the specific Batik Fractal feel. Of course when the design is made into a actual Batik Tulis, the handwriting of the pembatik will be more clearer.
The software, originally made to design architecture and ornaments on buildings, works with 'fractal'. Codes to change, double, multiply, rotate or twike patterns. A pattern can easy be changed by just changing colour or by creating a totally new layout. It is a quick and modern way of making designs and allows you to create again and again.
What I think I like the best is that Batik Fractal inspires a new generation to work with Batik. Batik makers that follow the workshops usually take someone of a younger generation with them to help with the "computer stuff". Also designers and other more computer orientated creative people use JBatik and get inspired to create actual Batik. It's a stepping stone that can make a better future for Batik Tulis.
Batik Fractal started in 2007. Their first designs were printed as textiles and later Batik cap design were added. Today they ask Batik artisan that use their JBatik software to sell some of their products through their webshop (see #madewithJBatik on their website http://batikfractal.com). Of every Batik Tulis, information can be found like who made it and sometimes some "making of" pictures are included.
A few of these Batiks where in the office and Muhamed asked if I wanted to document them somewhere in the building or garden. I took the opportunity after a short break eating pancakes in a hipster cafe and before the rains start. Apparently in Bandung it always rains in the afternoon.
The outside was beautiful with plants in recycled cans, the railway track and other factory metal rusted to orange and chicken running around. Great place for a photo shoot and Batik Fractal made a good choose moving. They just unpacked two months ago, so for once I'm very uptodate! 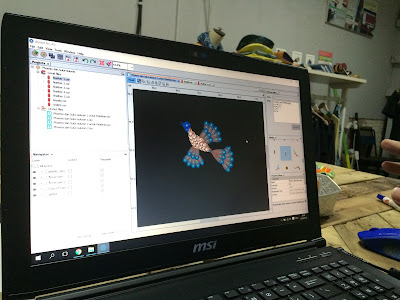 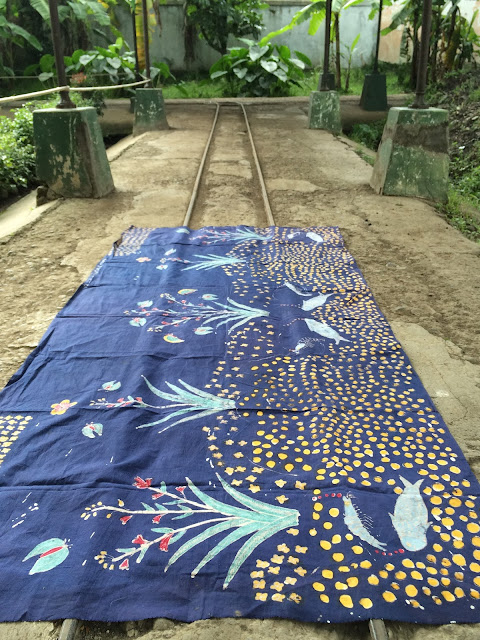 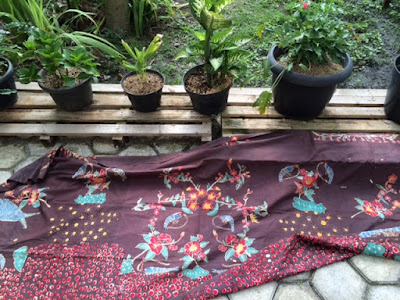 Batik Tulis made with JBatik

While I was taking pictures, Muhamed worked further on my try-out to make an actual Batik design from it. For me it is wonderful to spend a day being creative and it is so great I had such a day already in Bandung!
Returning to the office Muhamed created really fast a very nice design.
The plan now is to let this design be made in Solo at one of the artisan Batik Fractal works more often with. In this way I captured the 'making of' and end result of one design. I hope I can film while the Batik is dyed, cooked & hanging to dry!
But anyway, I'm already happy with the time spend at Batik Fractal. It is so wonderful to be able to ask everything I wanted to know, share ideas about Batik & the future of this heritage and just meet the creative mind behind Batik Fractal.

Keep up the good work! And hope to meet again soon! 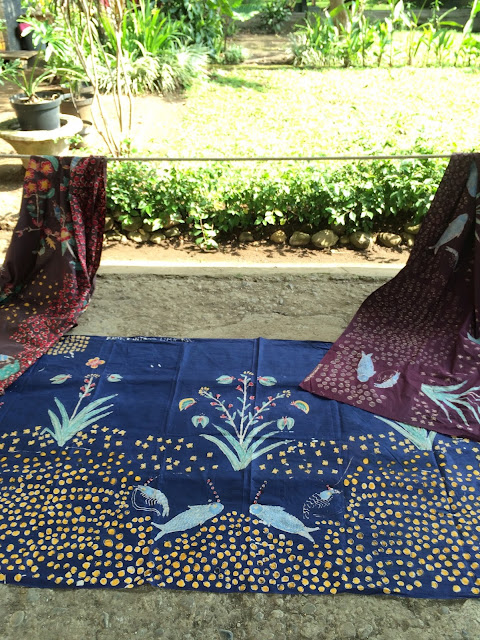 I also got a lot of tips how I should spend my next day in Bandung. First day out really as a tourist alone. Made me a bit nervous, but I relax better doing things. I started with a visit to Hasan Batik, a studio focussed on making home decorations with Batik cap for the Japanese market. I was shown around by Nia, Ibu Hasan Batik. She was very kind and even let her workers hang a huge Batik so I could take pictures. Their Batik Cap is a 'tampal', patchwork design. They play in the design with lighter parts to create a 3D effect.
Nia's sister also creates Batik Cap, but specializes in designing clothing for children. She makes designs with smaller sized classical patterns, but also with cars and cowboys. Very cute stuff!
I fell a bit silly buying only a little table runner, but my focus is on Tulis, but I wanted to support her and her sisters efforts. Batik Cap is still 1000 times better then printed textile! 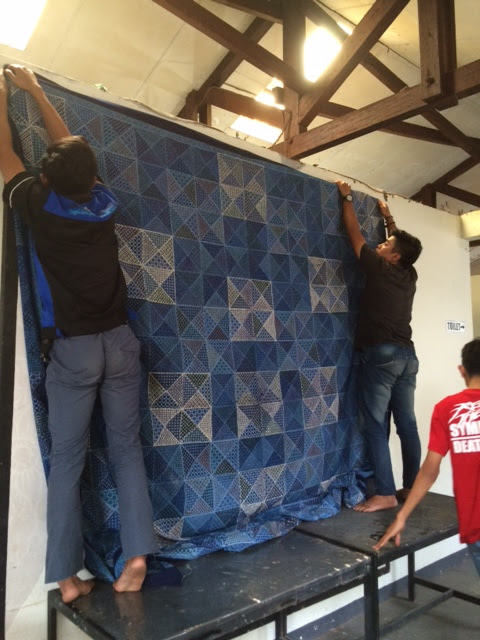 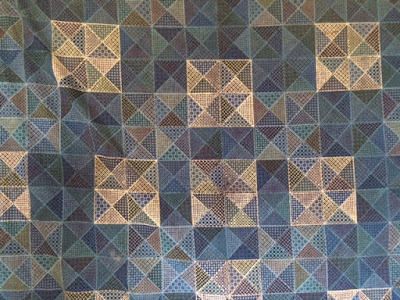 Nia asked me my plan, so I explained it was walking to the other well known Batik studio. Right away she asked one of her workers to take me per scooter. I will never get my 30 minutes of exercise here... it was up hill, down hill and we arrived at Rumah Komar Batik. Their Batik workshop was kinda closed due to the holiday, but I could still take a look. First thing I was shown was a printed Batik. It didn't say anything about it, but I'm surprised they even allow printed textiles in their shop.
She noticed I responded better to cap & tulis, so she continued showing me betted & better pieces.
Bandung doesn't have a Batik culture originally, so in a way it's difficult because you can't work within a tradition. At the same time it is freeing because you can design anything you want! Also a reason Batik Fractal is based here.
She continued showing me their cap motifs with "the bridge" (I haven't seen it myself) and 'angklung' (a bamboo musical instrument). Also a blouse designed by Mr. Komar with a fingerprint in bold colours. Apparently the blouse can be ordered custom design, so with your own fingerprint. Don't know if it is true, but the idea is brilliant!
In the workshop three girls were making a textile combining batik cap with Shibori. An interesting combination and it looked nice. How weird it is that Shibori is now a global trend! Can be Batik's turn after Wax print and Shibori? 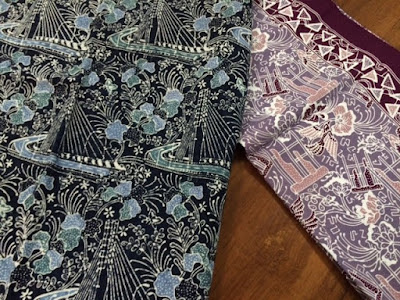 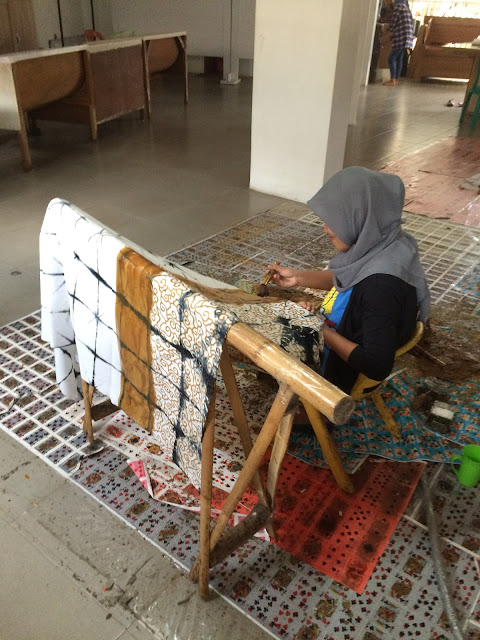 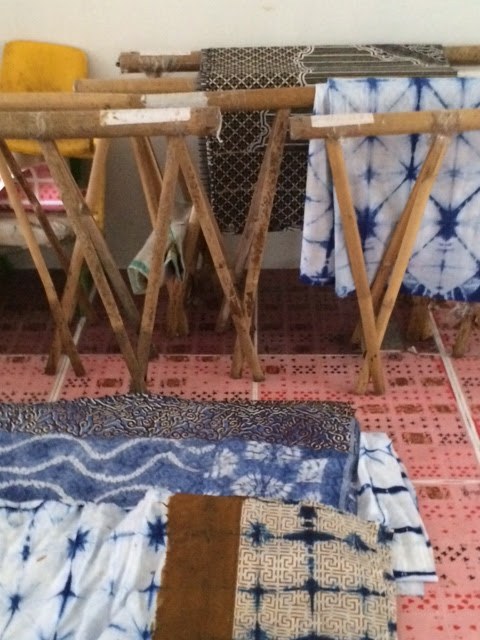 The afternoon was spent with more touristic things. After visiting the Museum Geologi, which I really liked! I went to see 'Jalan Braga' or "Braga Street". A must visit and for me a confronting one. I was told to go for "Dutch desserts", so I jumped in the first place I spotted, because it started to rain. 'Het Snoephuis' is located in this huge, empty space. From the ceiling a very big and smaller Art Nouveau lamps hang which don't work (I asked). The edges in the building are typical for 1920s and you can imagine the matching furniture back in the day. Also the matching "high life" that went along with it. I never felt so sad while eating pie.
I was happy when I reached the end of the street and had a chat with a taksi driver. He was complaining that Uber & Grab makes it hard for him and he didn't own a car himself. He was pointing to buildings across from us, saying: "very old, very nice building here". I was happy to hear that it is appreciated for its architecture and I was happy to pay a bit more for a ride back to the guest house. 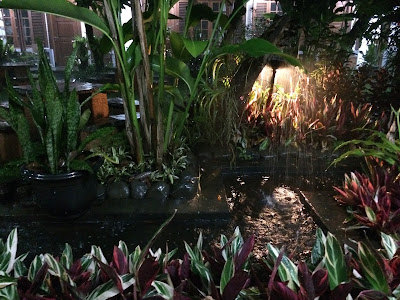