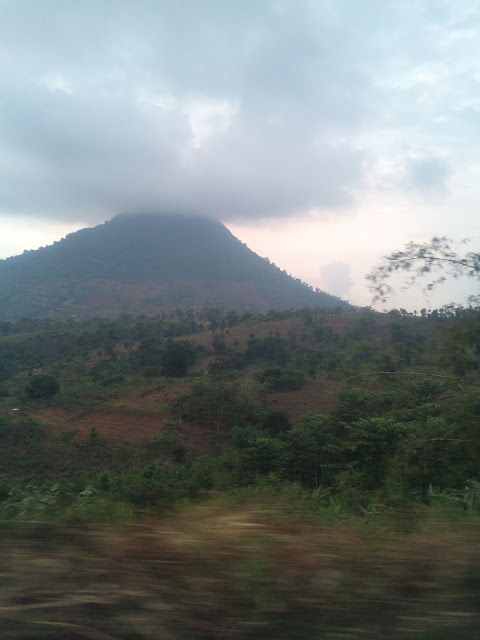 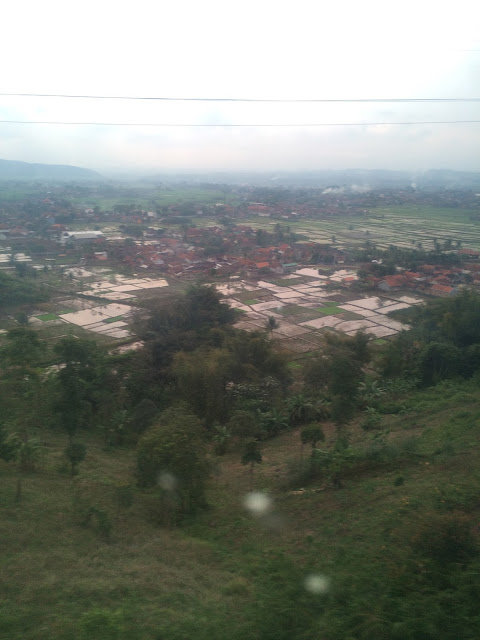 View from the train from Bandung to Yogya

After a train ride that lasted longer then my patience, I arrived with a welcome hug from my dear friend Barbara in Yogyakarta. I had to miss her for 5 year. It is so nice to see the person that is so dear to you laugh, talk and share the last passed years with you. And it is so great to get to know her wonderful husband Joko. Read more about him also in my previous blogpost 'The journey to Batik - introducing Joko Supriyono'. 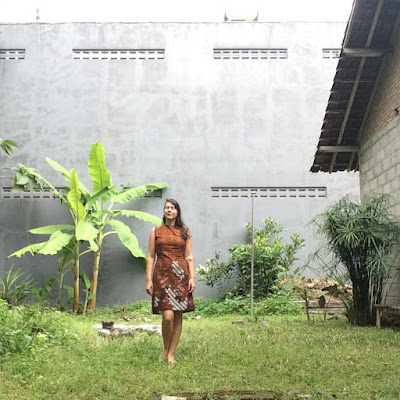 In the garden wearing dress gift from Barbara

The house of Barbara and Joko near Yogyakarta is a little piece of paradise. The next day I spent enjoying the garden, cleaning my cloths and unpacking.
Barbara is teaching English conversation classes, so I accompanied her twice to watch her teach and to converse with the students about Batik, Indonesian and Dutch culture. A nice way of learning and sharing experience of a 'Bule'.
Till Yogya my 'Bule' status was not so underlined yet. In Jakarta & Bandung only Taksi drivers seem to react strongly on it, but most people just think you are on business.
In Yogya the 'Miss, can we take picture' started. Well, it actually started in Bandung when I was sitting on a bench in the Museum Geologi and a guy sit next to me while his friend quickly took a picture of us. I didn't forget, but somehow I was suspecting it. It is a strange, fun, sometimes annoying, but a interesting experience to be ask by random people to pose on a photo with them just because you are a foreigner. 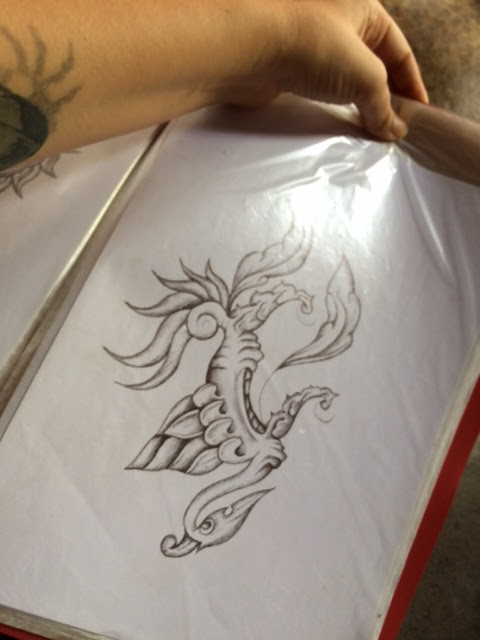 Next to sharing coffee & stories with Barbara, visitings Joko's Tattoo studio and planning my upcoming travels, I also got some Batik fun!
Together with a friend of Barbara I visited a place where they make Batik patterns on wood. Until I actually saw it with my own eyes, I didn't know these Batik motifs are also being made with canting. It is Batik Tulis in wood!
I was so surprised and happy! 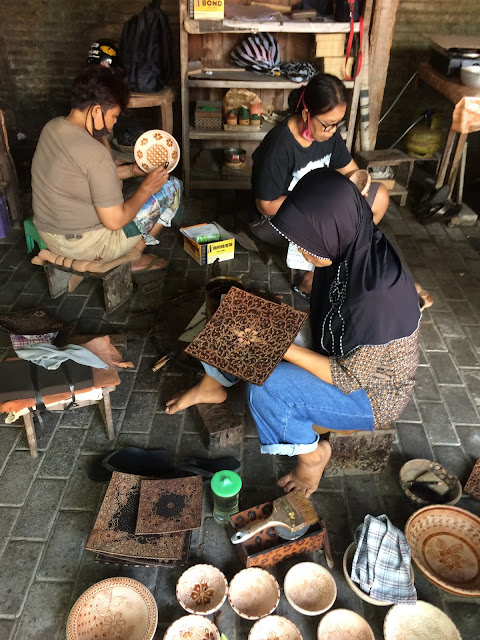 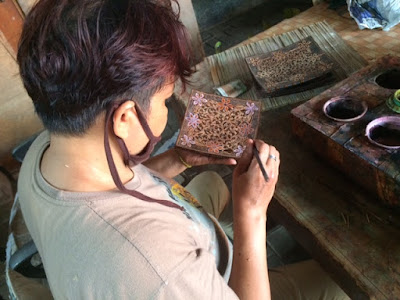 Batik Tulis on wood in Yogya

I also met with Hanif, the daughter of pembatik Ibu Maryati, to arrange my visit to Jeruk. She took me to the Museum Batik in Yogyakarta. A small museum full of old Batiks. The collection is displayed on rolls and some pieces are framed. Photographing is only allowed in the beginning were they explain the process of making Batik. Our guide gave a good tour in English and there are some very nice pieces in the collection. I particularly liked the very high quality Batiks from Lasem. Also because I was there with the daughter of a Batik maker that works directly in that history/heritage. On one cloth was a pattern in the background in a soft green. Little grains of rice. The grains of rice Ibu Maryati in Jeruk uses now in a bigger version.
Another nice piece of which they had two versions, one in Sogan (brown/blue/white) and one in blue & white. It was 'Thumbina" ("Duimelijntje"/ Klein meisje). "Thumbelina" (Danish: Tommelise) is a literary fairy tale by Hans Christian Andersen first published on 16 December 1835 in Denmark. The motif on the Batik was a repeating patten of a girl shaped figure with an flower around her head. Simple, but the first time I saw this fairy tale in a Batik. 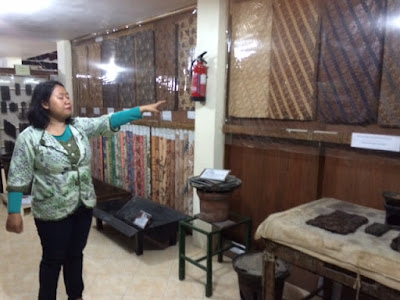 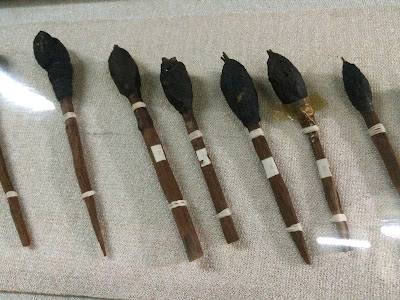 Batik "brushes" were in use before the canting pen 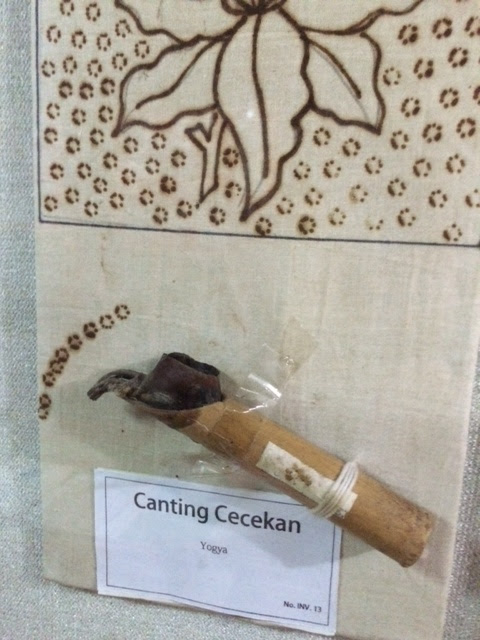 Seven dot canting pen, no longer being used by pembatiks

On Friday 23 September I headed to Solo for the Payung Festival and to meet Rusmilawati. We met before in Yogya on my last night in 2009 and later when she was studying in Leiden. So great to meet friends again after so many years!
The Payung or Umbrella Festival is a yearly event of three days in Solo were they decorate a park with hand painted paper umbrellas and celebrate different Indonesian cultured. Part of the event are two parades. I unfortunately missed the more Batik filled Carnaval on Sunday, but I could see the Umbrella parade.
My first real filming in the "field" so it was great to start with such a colour explosion. Designer Arif Tuep Artwo collaborated with komuniti/community Duta Seni dan Misi Kebudayaan Boyolali. Beautiful girls wore dresses in layers of woven fabric with on the edges a part Batik. I was in luck being early to document, because when the first girls were ready, the photographers started to flock like bees to honey. They asked the girls to pose, asked the dressers to move in the light and so on. It made it clear to me that whatever I film during this journey, I need to keep it real.
Keeping it real not in a philosophical way, but real as in how it unfolds itself before my eyes. I have to find the images, not create them. An overall useful experience! 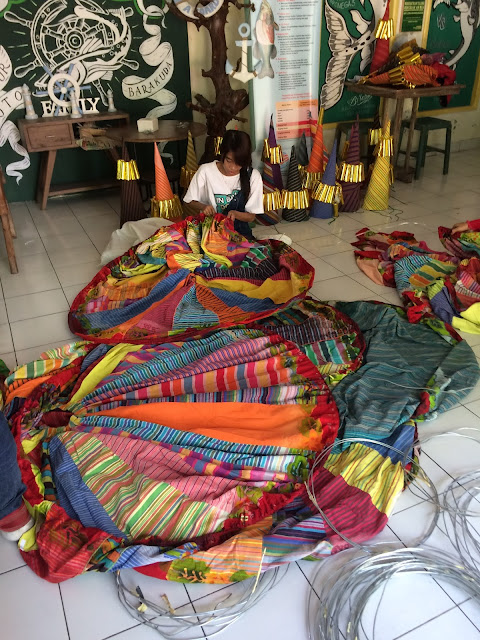 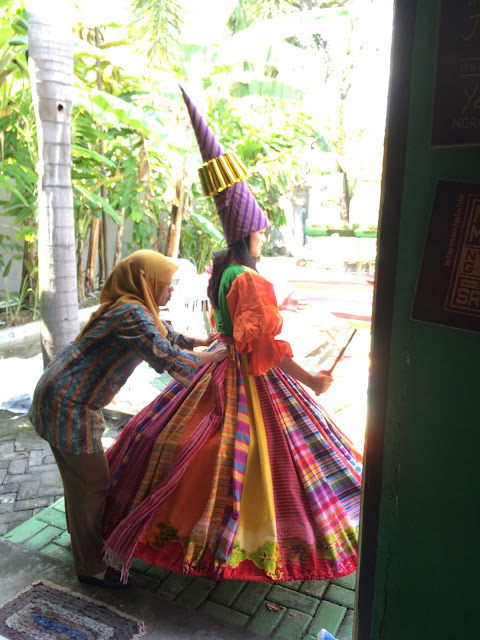 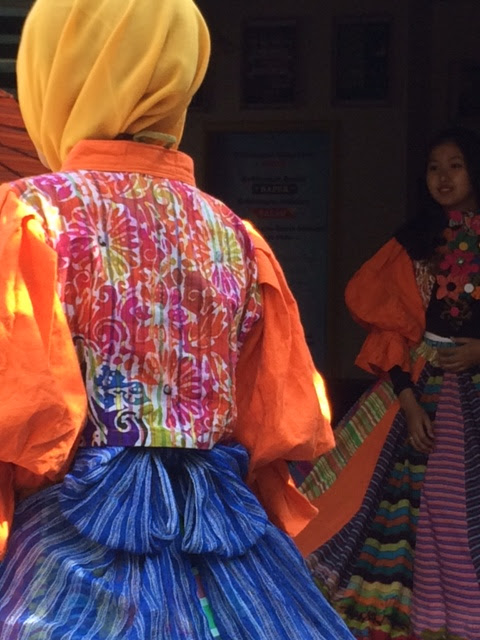