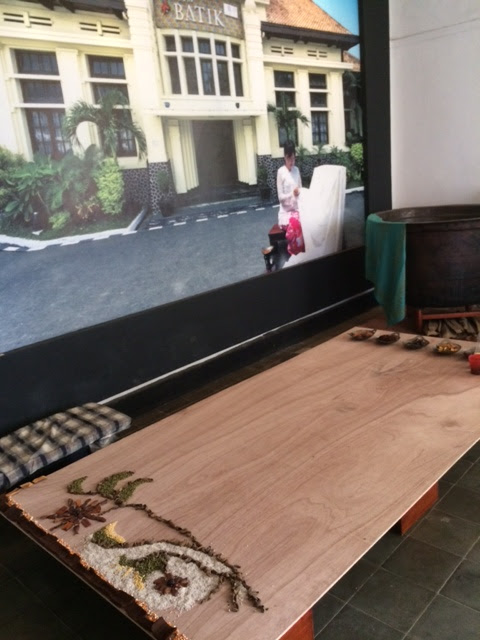 Making of my temporary carpet at Museum Batik

While I write this, rain is pouring down creating a river in front of the house were normally there is a road. On Sunday 10 October I returned to my temporary home in Sleman after an exiting and wonderful week in Pekalongan.
After my "preparation visit" about 2 weeks ago I returned to Pekalongan on 4 October. The Batik Week was starting that day and I was hoping to create an artwork at Museum Batik.


Making the same journey twice is nice and easy. Only thing that was different that there was smoke coming out of the Merapi volcano... at my transfer point in Semarang the people of volcano ask me "why you here again?". 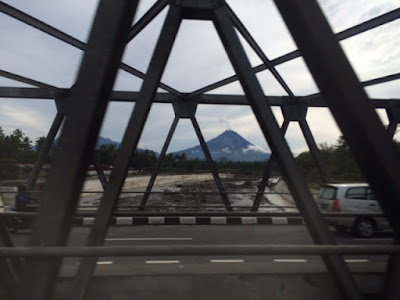 When I arrived in Pekalongan I found out that due to the busy time setting up the Batik Week, no preparations were made for my artwork. Only here you can make in less then 24 hours everything happen. Very fast an employee of the museum offered to get the Natural dyes I was looking for and in the morning I would go with Fajardewa and his wife to the pasar to get beras (rice) and other organic materials. 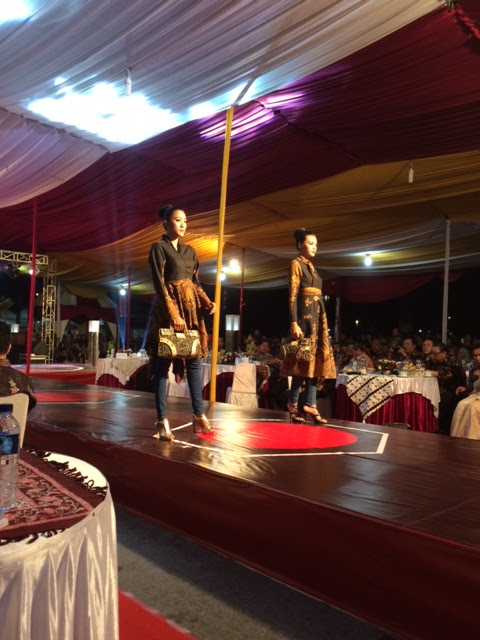 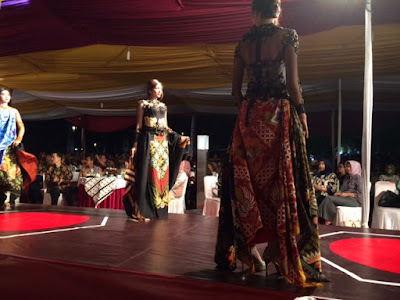 That evening was a Gala dinner & Fashion show at the museum. I was happy I could go and wear my beautiful Kamaratih Batik coat that arrived a day earlier in Yogya!
The Fashion show was a colorful parade of fashion made by local and Javanese designers. Sitting on the side it was hard to tell if Batik Tulis or printed textiles was being used, but there were some nice silhouettes being displayed. Clothing by one designer, I specifically liked,  worked in asymmetrical layers with Batik Cap (I think) creating very feminine yet modern looking outfits. Another one, also from Pekalongan, used popular rock symbols in her designs like the mouth of the Rolling Stones. A nice surprise and very bold. Would like to meet this designer one day! 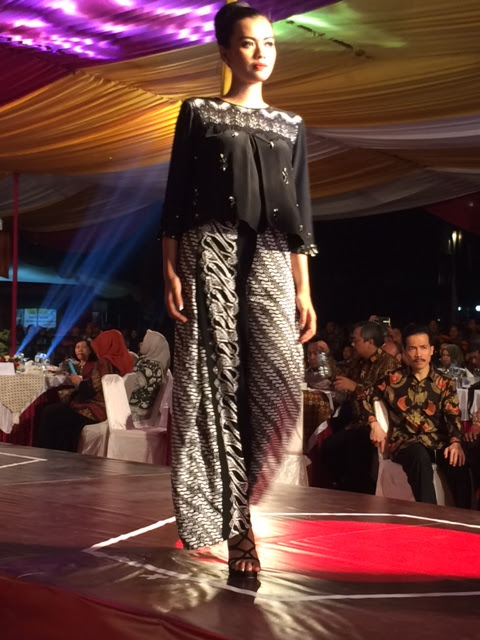 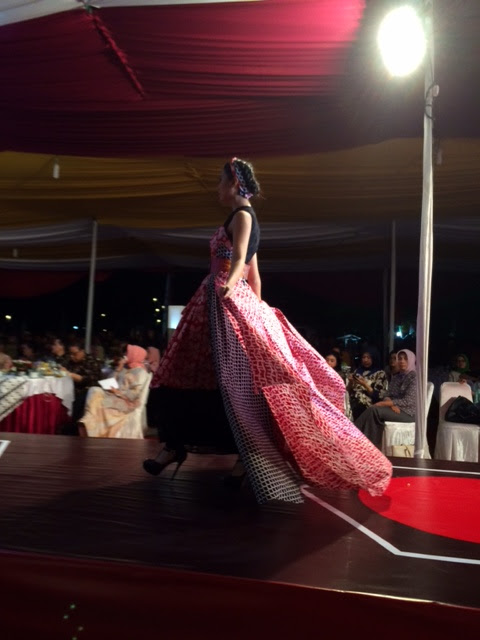 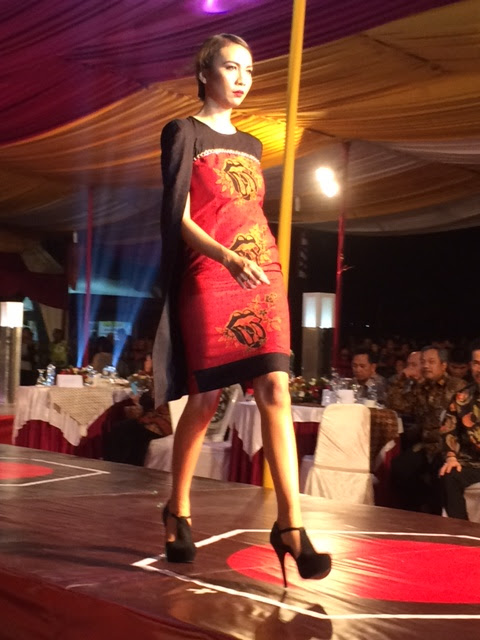 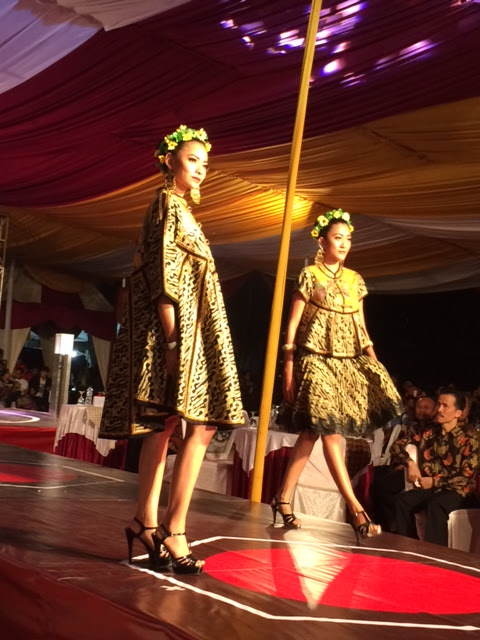 The next day arriving at Fajardewa's house I heard that the Natural dye materials already arrived in the museum. We headed to the pasar to see what materials I could use.
With bags filled with rice, maize and a kind of lentils we continued to get materials for my stage. At a shop we bought a full size triplex plate. I wondered how it would reach the museum, but was told that a becak would bring it. Indeed a becak driver came, taking my bags with materials and placed the triplex plate on top of the seats and headed to the museum. Wow! 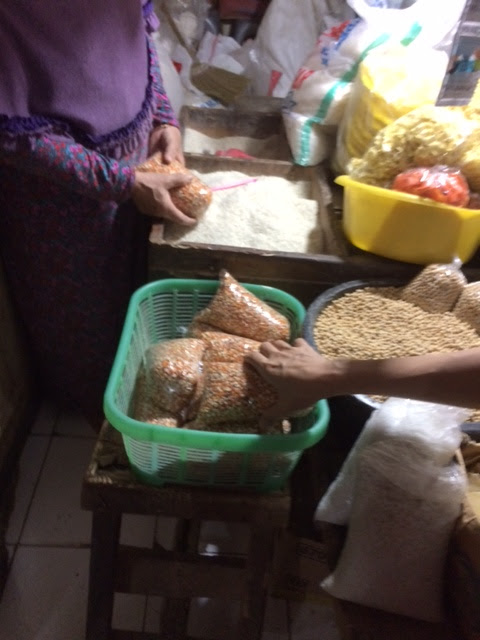 Finding materials at the pasar for my carpet 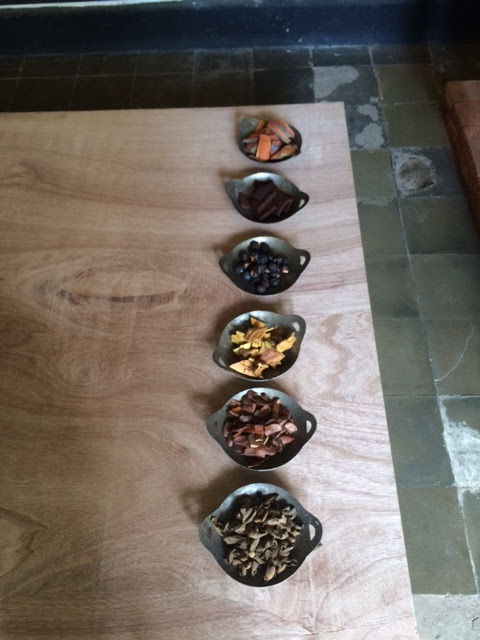 At the museum I started setting up right away. I ask next to the Natural dye for the wajan's they use to heat the wax. I used them to display the materials I was using to make my carpet.
Yes, a carpet, I was going to make a carpet, or better sarong, using materials that are being used to color Batiks. The motif, the design of this temporary carpet, I based on the well known Batik Buketan design Pekalongan is famous for.
Working with new materials is always exiting and I was happy to find that drawing with the Jalawe, Lerak, Tingi, Tegeran and Jumbal worked better then expected. It was wonderful to work on such an inspiring location surrounded by people who recognize and appreciate the materials I use.
The rice I used for the background because it is good contrast color is seen as an actual Batik motif. This motif know as "sprinkled rice" is a classic and Ibu Maryati from Jeruk makes her own modern version of it. 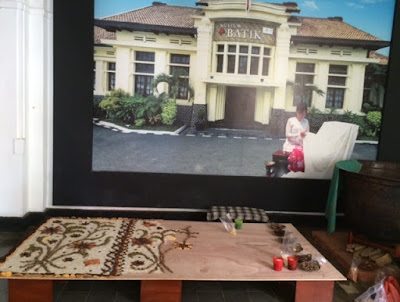 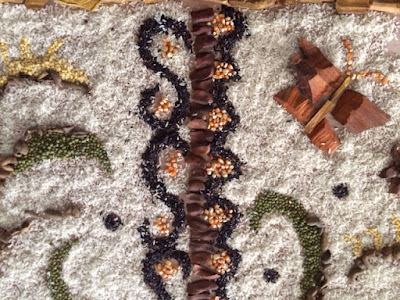 I worked through the openings-hours of the museum and was told not to finish the carpet that day because important guest would come the next day and would like to see me at work. I laughed because I knew I could never finish in one day. But glad I could prepare my carpet in a way I could still work with a crowd around me the next morning. 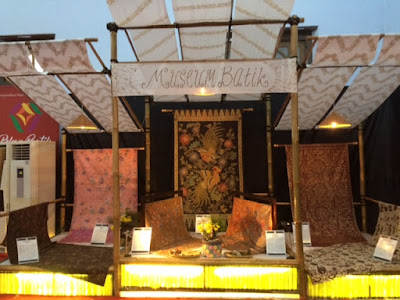 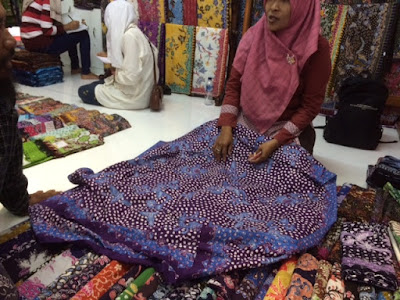 Batik by Ibu Maryati in one of the stands

Around the Museum Batik for the Batik Week was a festival terrain with stands filled with Batik and food. The Museum Batik made a bamboo house to display a small Batik exhibition.
In some of the stands were wonderful examples of Batiks dyed with natural colors and also a stand representing Batik Lasem. I spotted a Batik with a similar 'big grain of rice' motif Ibu Maryati uses in her designs and it turned out it was by her! 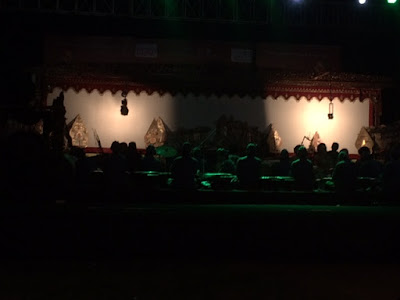 In the evening a Wayang Kulit performance was held for the military. The loudspeakers were a bit to loud for me, but it was a wonderful display. Two Wayang masters told the story. At one point the figures were in a kind of battle. One Wayang master threw one after another doll over the stage after spinning it around in front of the screen. His display got a big applause. 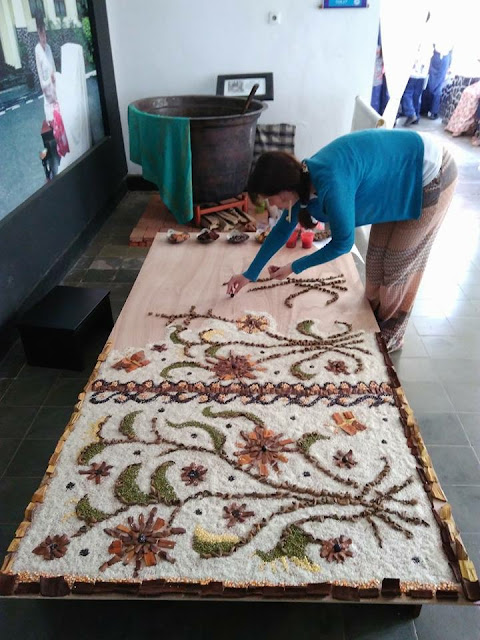 The next day I continued with my carpet with more viewers. Some ask me something, but most just watched me work and just say "Baik" or "Bagus".
My carpet was not only noticed by visitors, also by the media. The local Radio sender Radio Kota Batik came to interview me and later returned with a cameraman. The item he made was shown on national tv! And on Twitter I found many people shared an interview. In this interview some things were written a bit stronger then my actual words like: "I hate Batik print!" And some things are just not true: "I'm 26 en lived 7 years on Java to study Batik with permission of my parents". I wish!
But still great to get so much appreciation and have such a wonderful time making it! 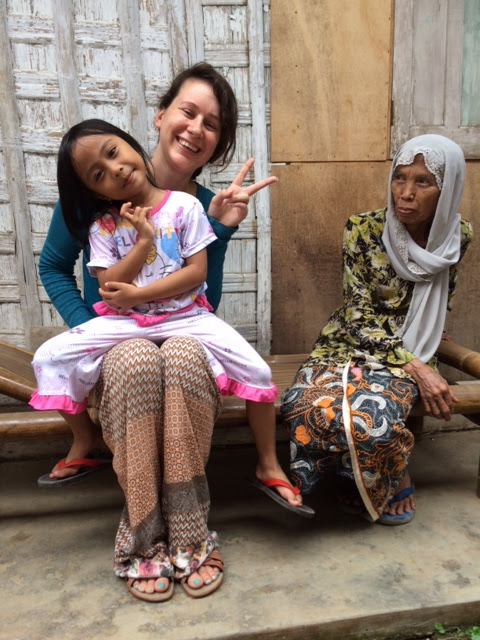 Mak Sium, me and her granddaughter 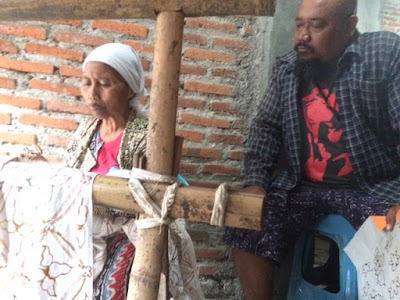 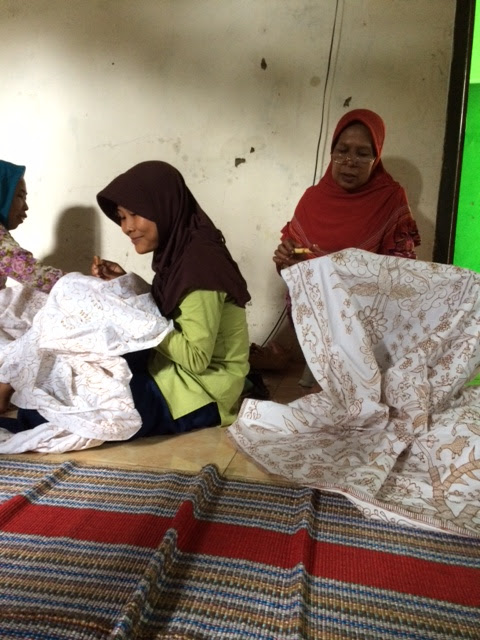 Nurul and her mother

On Friday and Saturday morning I returned to Batang to film some of the Batikmakers I met during my first visit. A great experience and I hope to share more about that in the near future.
In the afternoon the Batik Carnival took place in Pekalongan. Yes! But it was very busy and when the parade finally arrived it started to rain, but still it was a wonderful display. With Batiks and natural materials costumes were made. A lot of birds and butterflies marched by, but some were more creative and made me & Qomar very happy. We were judging every design very seriously and laughed that we should give out our own award as independent jury. 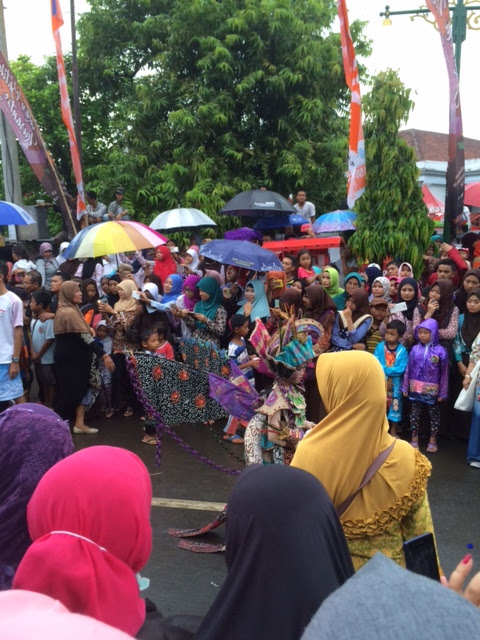 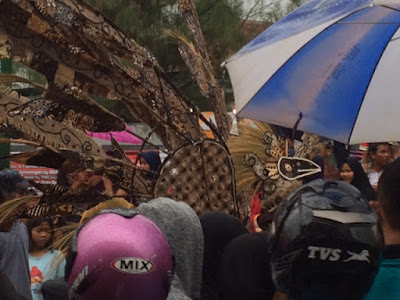 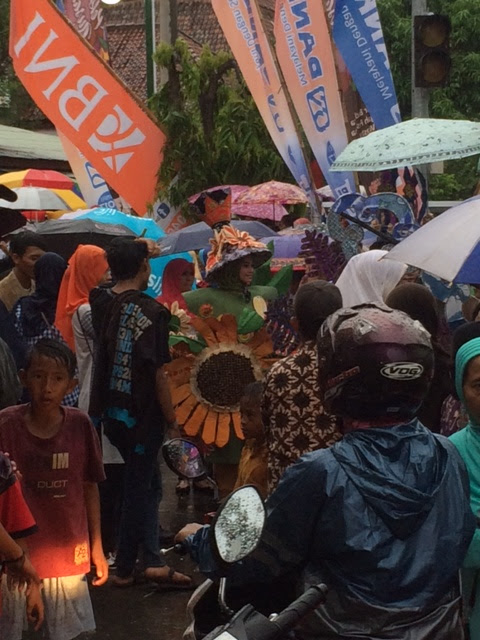 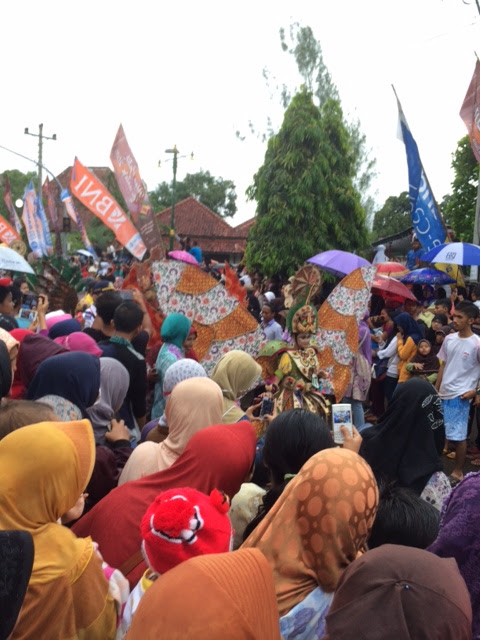 I had a wonderful time in Pekalongan & Batang and would like to give a special thanks to Cornellius Pasattimur Fajardewa, Mr. Mandala, Mak Sium & her family, Nurul & her family, Qomar, Pak William Kwan, Ibu Rasminah & her family & everyone at the Museum Batik!