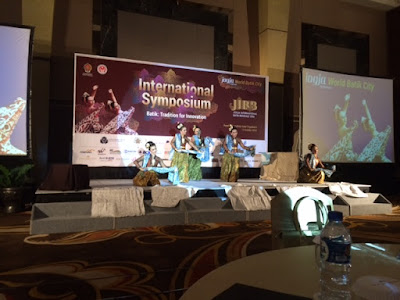 Promised myself not to take flights while being on Java, but I'm writing this first paragraph on a plane from Semarang to Jakarta. I will be more sustainable when I'm back home again... For now this is just the fastest and easiest way to get there.
I just had a dream come true experience in Jeruk. The place where it all started, where my true journey to Batik started. The last 7 years I wished so many times to go there, it was very special to actually be there. I feel kind of sad leaving so fast towards the next adventure, but I know I must and will return there again one day!
The Jeruk-story has to wait, because I first have to write about the Jogja International Batik Biennale (JIBB).
I never heard of this event before so I was happy I could join and that it was precisely in between other travel-plans.
I decided to go two days to the JIBb. One day Symposium, one day exploring Batik culture around Imogiri. I never been there and seeing all the lovely pictures of people wearing 'dodot' (see 'Batik Statement IV') visiting the Sultans graveyard, it was on my wishlist for a long time already.

The Symposium was held on Thursday 13 October at the Royal Ambarrukmo hotel in Yogyakarta.In the conference room it was buzzing with ladies in sarongs with nice jewellery and man in interesting ensembles, some traditional, some more fashionable. The JIBB started the day before, but the program title for Thursday sounded more interesting: "Tradition for Innovation". None of my Batik contacts from Java were there, but I was placed at the table with the international speakers. That meant also that I was sitting at one point alone at the big round table front-row. 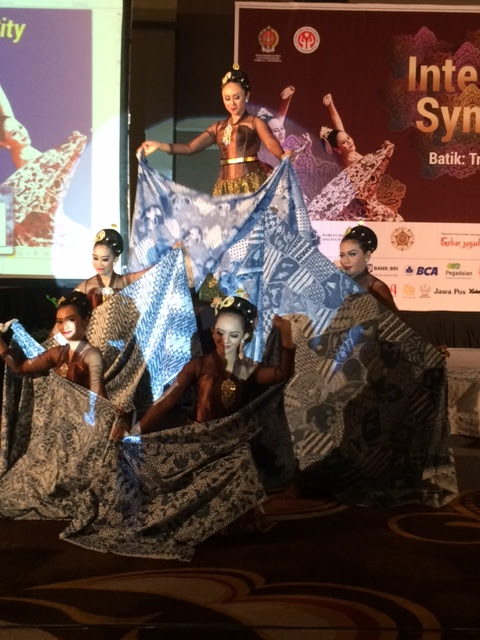 The Symposium started with a very fitting performance of 'Tari Batik'. A new traditional dance in which the dancers show all stages of creating a Batik.
After a speech by the organisation, a speech was held by the Head of Honorary Committee of JIBB 2016 by Queen Hemas.
The speech was held in Bahasa Indonesia, next on the screen was a translation in English. The speech was about "bringing Jogja Batik to the world" and I was a little baffled that this could be both "personal fine Art Batik" and "mass-produced Batik". I hope she meant Batik Cap and not printed textiles...
After the speech the first talk was held by Mr. Mandu who is doing an interesting research on finding prove in old Javanese manuscripts about the history of Batik. Looking forward to hear more about his finds! 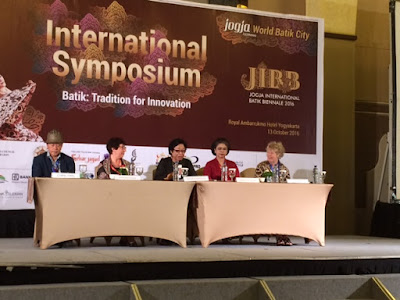 After a short break with a brilliant musical intermezzo by a very talent group of singers from Yogya, the first session started with the title 'Global innovation of Batik'. The table guest were princess Paku Alam X, who started producing really refined new Batik Tulis designs based on old manuscripts from the Kraton. Mr. Eric Ong from Malaysia who talked about being sustainable in fashion by using traditional textiles or techniques like Batik and Sashiko. Tatjana Agababaeva from Azerbajian who makes Batik herself and Annegret Haake from Germany who makes interesting exhibitions about Batik in a castle (location added to my must-visit-wish-list) 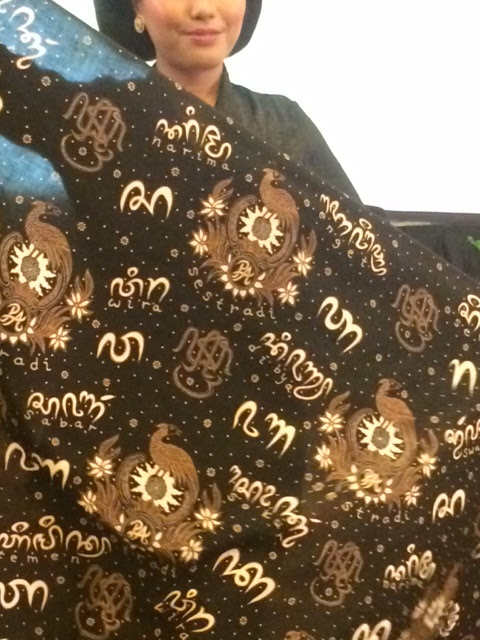 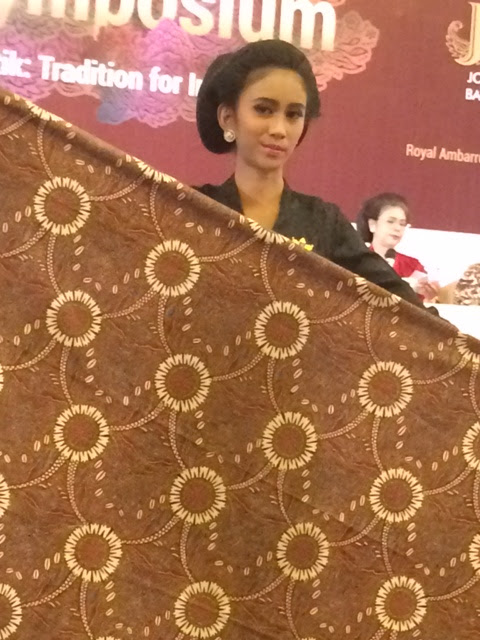 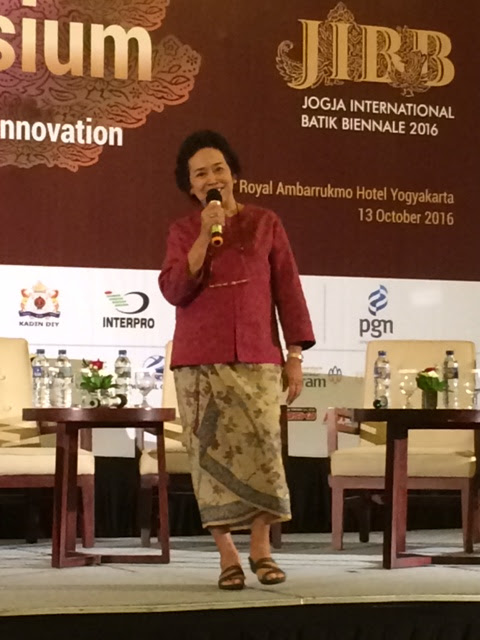 After lunch and a lot of selfies, we continued with the last and second session titled 'Current Issues on Batik Innovations'. Moderator Retno Murti, lifestyle journalist, gave a wonderful introduction showing Batik being used in different ways. Mostly as motifs on object likes cars and cakes, but also Batik Fractal software was in her presentation.
This panel was not so strong as the first one and no real discussion started. It was more everyone sharing their own thoughts, or better point of views, without being critical about this important subject. I heard a lot of similar things that are being repeated since 2009. For example: printed batik is bad for Batik Tulis industry, we need to preserve the tradition, we need to use Batik in fashion. And unfortunately no real solutions are brought to the table. Why not start with paying pembatiks better, using education not only to create buyers of more Batik businessman, but to find a new generation of Batik makers!
But lets not be too critical, I'm happy events like this are being organized. I'm happy talking about Batik with interesting people from around the world! And I'm looking forward to the 2018 edition. 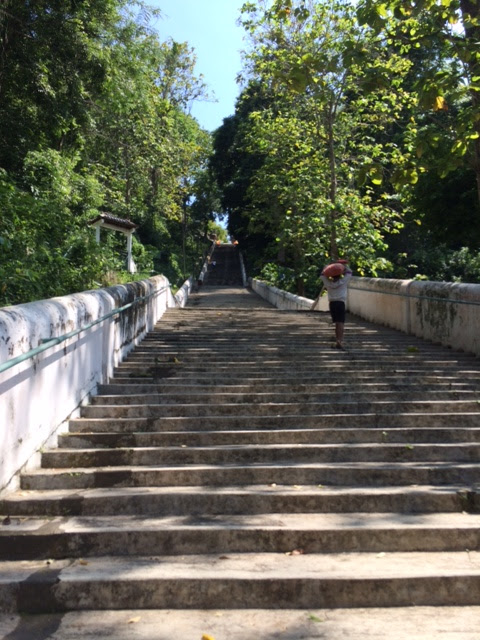 Writing the second halve of this post stuck in traffic in Jakarta...
On Saturday 15 October the Batik culture around Imogiri was on the JIBB program. We were asked in the morning who wanted to walk the steps to the final resting-place of the Sultan. Well of course I wanted to. Turned out I was not the only one, but of 6 mini busses, only one didn't ride directly to the top...

The location of the Royal Cemetery is breath taking, and not only because you have to walk 400 steps up. Barbara told me about walking in a zigzag, I told the group but no one believed me until a man carrying a cement bag on his head zigzagged his way up.
The view on the steps is beautiful and arriving at the last entrance I felt a little relieved I didn't have to do all the steps wearing a sarong.
To enter the final resting-place you have to leave your "belongings" behind. You get changed in traditional wear: for women a batik as a sarong and a batik as a top, hair loose, no jewellery. After the change, it feels really special walking the last steps. 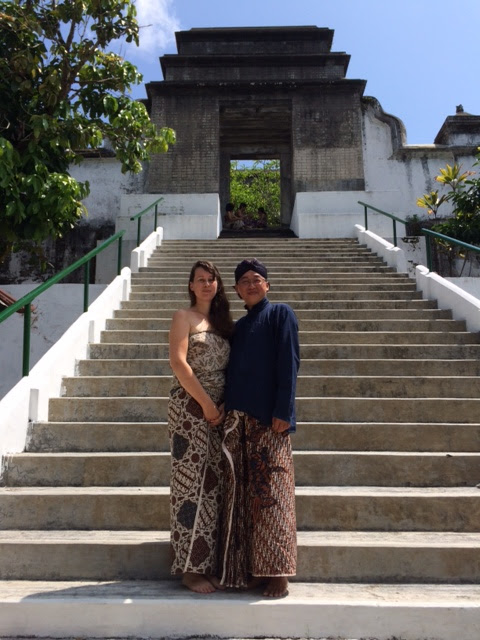 We went down the lion mountain (or is it mountain of snow) arriving at a beautiful old Javanese building. I couldn't follow precisely what happened there, but I understood this was first a Batik Museum but was now still to badly damaged from the earthquake. The entrance was rebuild, but the rest was still in ruins.
Going to the "new" Batik Museum location I spotted more damage on the way. This means people are already not able to rebuild for 10 years in this area... 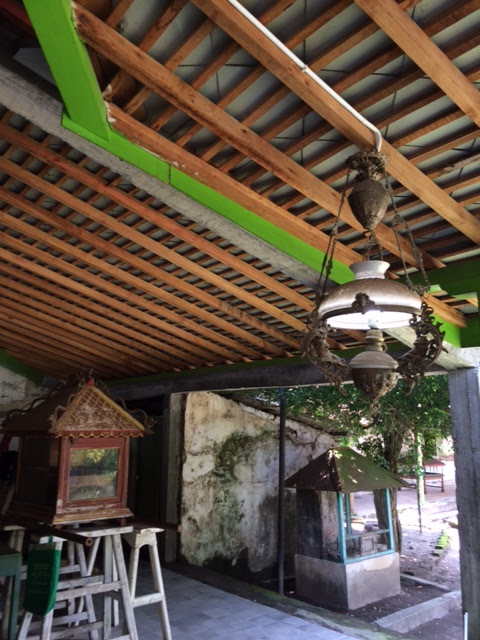 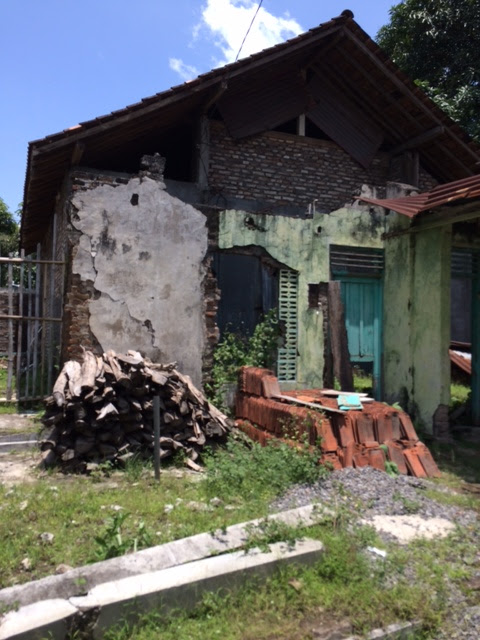 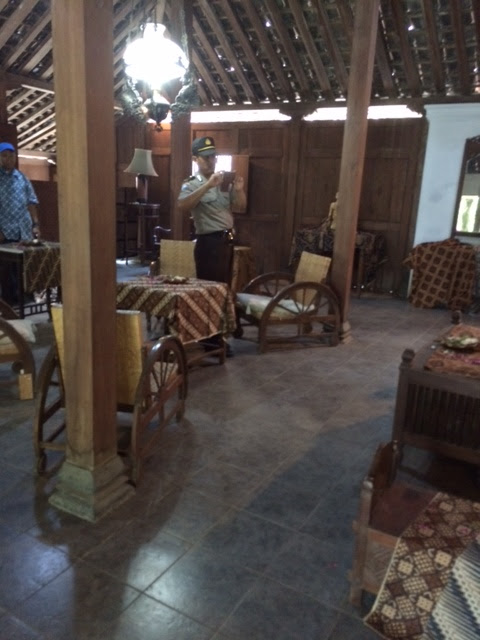 At the Museum Lingkungan Batik in Imogiri-Bantul

After lunch we went to a, in my eyes, Batik theme park. This 'Kampung Batik Giriloyo' is a terrain with little traditional huts in which different Batik makers & sellers present their collection. You can make a small batik yourself with a ready put on design. The batiks are dyed with Natural Dye, so that is pretty cool! They used Mahoni and Jalawe, so it was wonderful seeing the colours of the materials I used for my temporary carpet in Pekalongan. 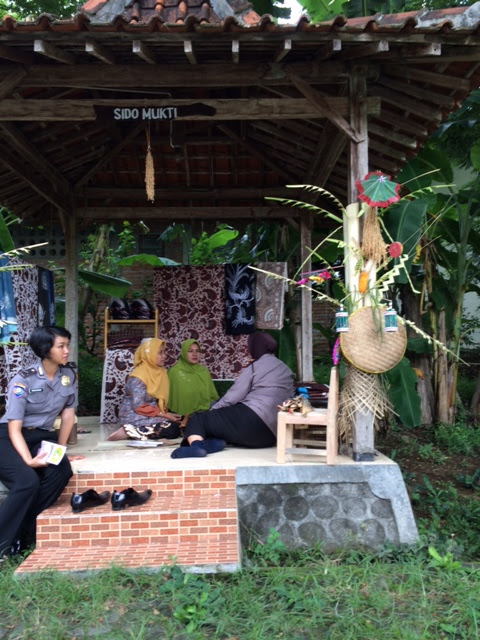 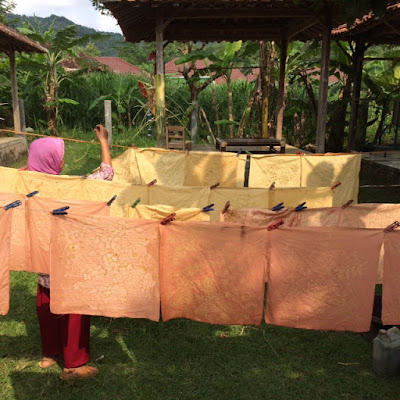 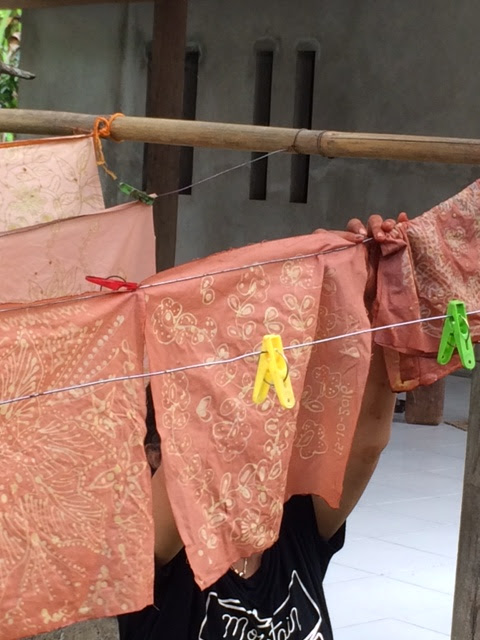 The day ended with a farewell dinner with pop music and traditional dance. I think the program on Saturday was a good balance between seeing Batik in Javanese culture and supporting a region that can still use a lot of support.
I'm happy to have this sight seeing day with a Batik theme and just going along for the ride. Was like a tiny holiday within my amazing journey! 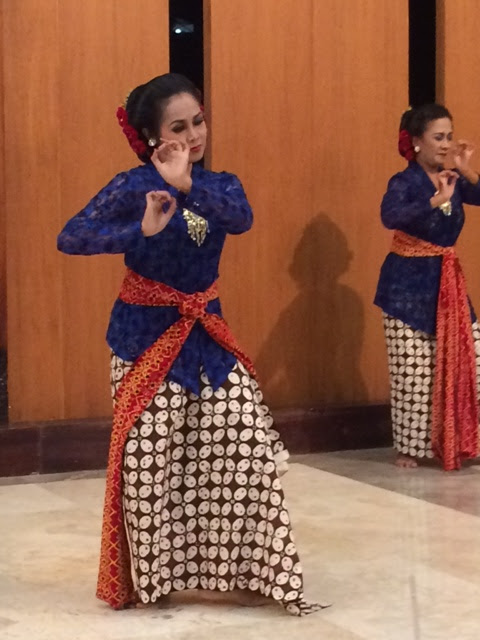