Javanese Batik to the world by Maria Wronska-Friend 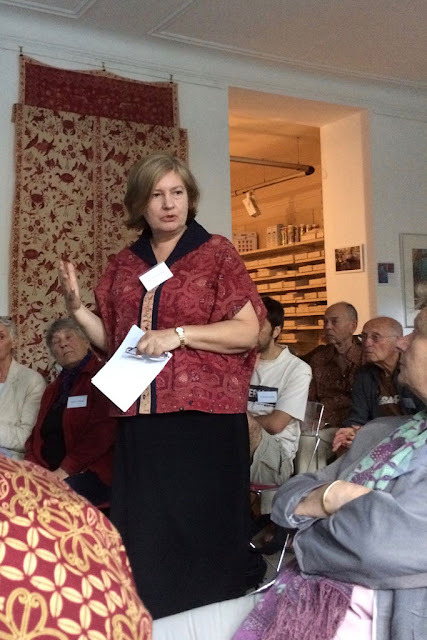 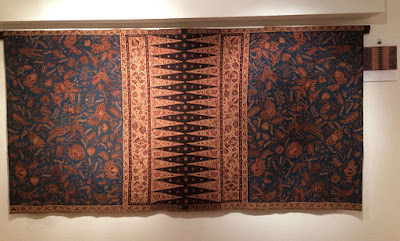 
I intended to write a post on my experience at the brilliant Mini-Symposium, which wasn't mini at all, organised at Galerie Smend in June. I ended up writing only about Maria Wronska Friend's book, which was launched during the evening before the symposium, and about her talk, which was during the symposium. So in a way it is about the symposium after all and I maybe post more about the symposium later.
Let me start with thanking Rudolf Smend for the invitation. What a wonderful opportunity to meet so many Batik fans and share an evening & day full of Batik in Cologne, Germany!

After a very easy train ride to Cologne (love living in Utrecht), I arrived at Galerie Smend just in time for the opening of the Batik Art by Catalina Espina and the launch of Maria Wronska-Friend's book Javanese Batik to the world.  Batiks from Rudolfs collection mentioned in Maria's new book were on display through out the gallery.
First one that caught my eye was this dark blue indigo canvas with just a simple batik crackled white line on it. I knew this work from somewhere...Took me till the next afternoon to find out I had been chatting with the maker of this piece and of the lovely book 'Indigo' (2013) I have at home, the artist Peter Wenger.
His delicate work is best described as poetry written with Batik. He started using the batik technique in 1952. Originally from Germany, his years living in Ireland and the inspiration from it can be traced back in his work; the sea, the myths, the poetry. Peter is now based in France and has been making works till recently, and will hopefully continue again soon. The publications made by Galerie Smend from 2005, 2007 and 2013 are more then just catalogs, they are artworks and a great way of getting to know this artist better. Thanks again Peter for the kind gifts! And great that Maria included this artist in her new book! 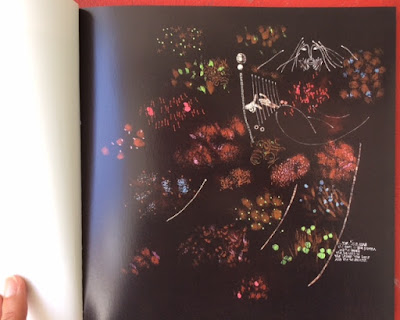 
Maria's book Javanese Batik to the world is in English and Bahasa Indonesia, Batik jawa bagi dunia. Publishing it in two languages must have been an enormous effort for the auteur and it is great she made it. Most Batik books are only available in English or even Dutch...and even some only in Bahasa.
Maria's knowledge is vast and wide. Her interests are so similar to mine and it so wonderful to see how much more there is to discover.
Her book Javanese Batik to the world is actually not about Javanese Batik. It is about how Javanese Batik inspired people across the world to work with Batik. The book includes a chapter on how 'De Nieuw Kunst' movement, the Dutch Art Nouveau**, started making Batiks for interior design, a chapter on the history of Wax Prints, on English Batikmakers from the 70's and on batikked Sari's from India. A must read and I need to make more time to do so myself. 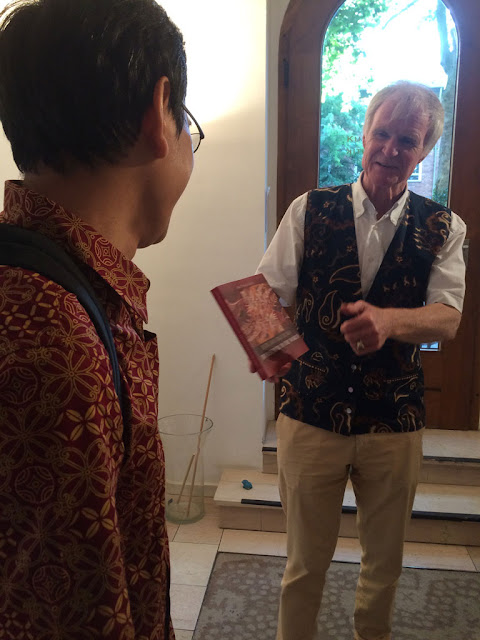 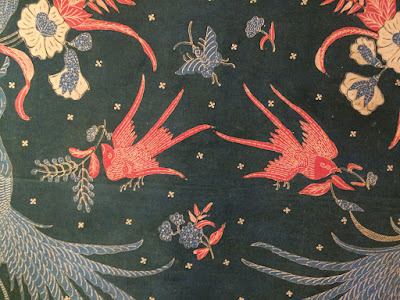 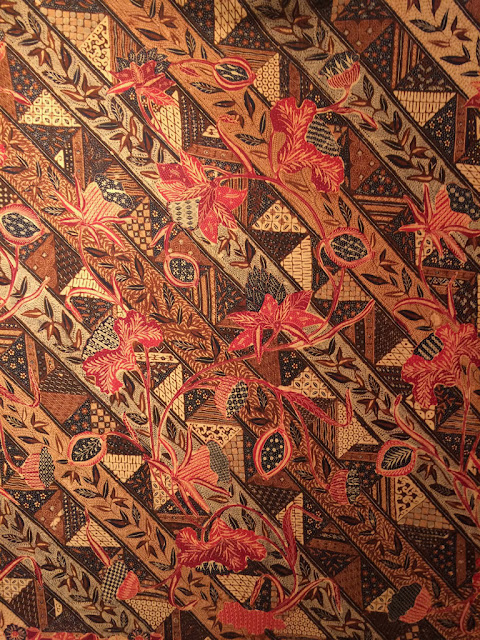 During Maria's talk at the mini symposium, 16 June 2017, she introduced us to her research. I like to highlight two more persons she introduced and of whom I wish to learn more about in the near future. And definitely will thanks to her new book!

Henry van de Velde (1863 – 1957)  was a Belgian painter, architect and interior designer. His influence on the Belgium Art Nouveau was big and he is considered to be one of the founders of this movement. Van der Velde got introduced to Javanese Batik through the collection of Thorn Pikker in 1894. Where artists and designers in the Netherlands used the technique of Batik, because it was handmade and fitted perfect with the ideas of the Art Nouveau movement, Van der Velde took the unusual step of using industrial imitations of Javanese batiks that at the beginning of the twentieth century were printed in several factories in the Netherlands as well as in the United Kingdom and Switzerland.*
He used the imitations in interiors, but also dressed friends and family in it. The ultimate Batik Statements in black and white from a century ago!
In Maria's article on Henry's love for and work with Batik, mostly imitation batik fabrics, you will also find more pictures of his friends and family dressed in batik motifs. Request a copy through the link at the end of this post. 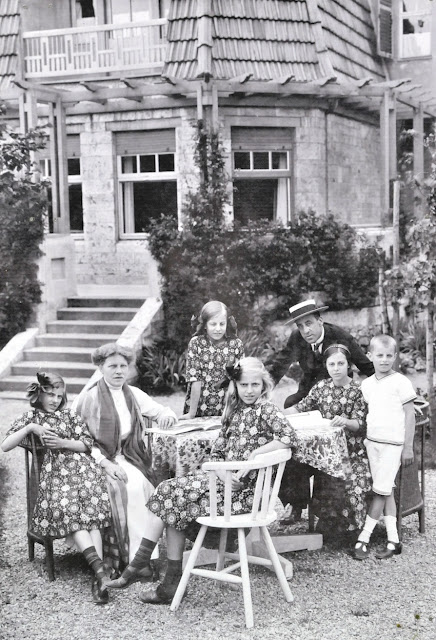 Emily Kame Kngwarreye (c. 1910-1996) was an Aboriginal women who started making Batik when she was 67 years old. With a group of women she was producing batik in the desert under the name Utopia Batik.**** This hard way of producing batik outside made Emily switch to painting with acrylic when she was 80. Her switch from textiles to painting put her on the map as one of the biggest artist from Australia. An overview exhibition in Osaka in 2008 was to best ever visited exhibition ever held in Japan! A whole chapter in Maria's book is about this grand lady and her wonderful batiks. What an inspiration! 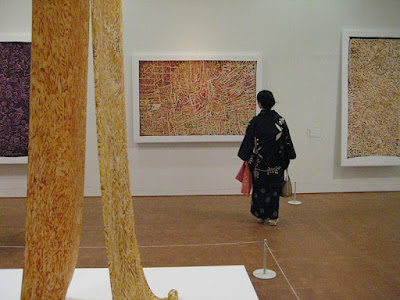 Installation view of a museum visitor looking at Kngwarreye’s batiks at the National Museum of Art, Osaka, 2008. Photo: Sonja Balaga

** More on 'De Nieuwe Kunst', the Dutch Art Nouveau movement, in these previous posts 'Batiking men in 1918', 'Little Red Riding Hood, where are you going?', 'Vlisco designer Johan Jacobs' and 'Give honor to whom it’s due'