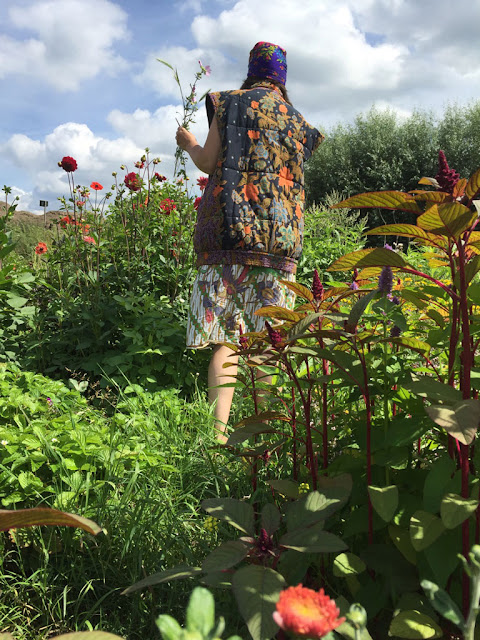 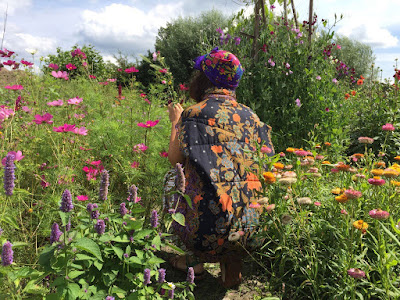 Summertime is Batik time! I spotted this field of flowers and knew this was a good spot for my 4th  Pattern Edition Batik Statement. With this series of 'statements' I try to explain the meaning of a pattern or motif. During my journey on Java last year, I noticed that every dot or line on a Batik has a name. Sometimes the Batik as a whole represents something, but also every individual detail has its own name and meaning. To learn a little more about Batiks and their story I thought it would be nice to capture their meaning in 'Batik Statements'.

Let me introduce: Buketan
Buketan comes from the Dutch word boeket or bouquet in English. Buketan is used as a big motif on Batik in both the kepala, the head, and the badan, the body. It literrally looks like a bouquet of wild flowers, loosely arranged without a vase or bow. Usually its surrounded by flying birds, butterflies and insects.

When you think of Batik Buketan, you think of Pekalongan. The city were the motif was invented and is still being made today.
The motif is first made by, or at least got famous by, Eliza van Zuylen. Eliza van Zuylen (1863-1947) ran a Batikworkshop in Pekalongan producing high-quality designs for a Indo-European, European and Peranakan clientele. Next to designing her own, she copied designs of other batik entrepreneurs. Her Indo-European styled Batik combined traditional Javanese motifs with Art Nouveau patterns. In the book 'Fabric of Enchantment' is written that her design of an asymmetrical tree with wading birds, evolved into a wisteria tree, blauweregen in Dutch, sheltering peacocks. This then became a bouquet of assorted flowers around 1910.

A story of how Van Zuylen designed her buketans goes that she used cut-outs of flowers and arranged them. So the same way as how you would arrange an actual bouquet. Her paper arrangement was then transferred onto paper and turned into a Batik. Fun fact, her sister, Christina van Zuylen, who ran a Batikworkshop also, first sold floral arrangements and bouquets.
Eliza van Zuylen was the last Indo-European to have her workshop open during the Japanese occupation (1941-1945). After the capitulation she got interned by the Indonesians. She passed away in 1947. Her Batik workshop got plundered, yet, Oei Khing Liem, a Peranakan entrepreneur, whose backyard bordered Van Zuylen's batikworkshop, still offered a large sum of money for the rights of her signature. The offer was declined. He already was making copies of her Batik Buketan designs, without the signature.

Chinese Batikmakers started using the design all over the North coast area of Java. And it is within these workshops the Buketan legacy still remains.
Nowadays the best Batik Buketan can still be bought in the Pekalongan area. Widianti Widjaja, granddaughter of Oey Soe Tjoen, still makes her grandfathers famous 3D designs. I heard the waiting list for a Batik from this workshop is 7 years, or was it 3 years, anyway it is worth the wait.
Oey Soe Tjoen started around 1925 with his wife Kwee Nettie Kendoengwoeni. They both designed Batiks, but they got most famous for their copies of Eliza van Zuylen's Buketan. He created a unique three-dimensional effect in which rows of dots create this shadow effect in the flower petals. Apparently Van Zuylen tried to copy this effect and couldn't...
In 1975 the workshop was taken over by his son and is now run by his granddaughter. This fierce lady is in the documentary 'Batik, Our Love Story', showing how the high-quality Batiks stay high-quality. The Batiks are made in 7 colour baths, which means that the wax is applied 7 times. If in any of these steps a mistake is made, they start with a new Batik. In the docu you see Widianti Widjaja preparing the cloths, drawing the designs on and checking the cloths between steps. A hardworking lady with a beautiful product! Hope to visit her workshop during a next visit to Java! 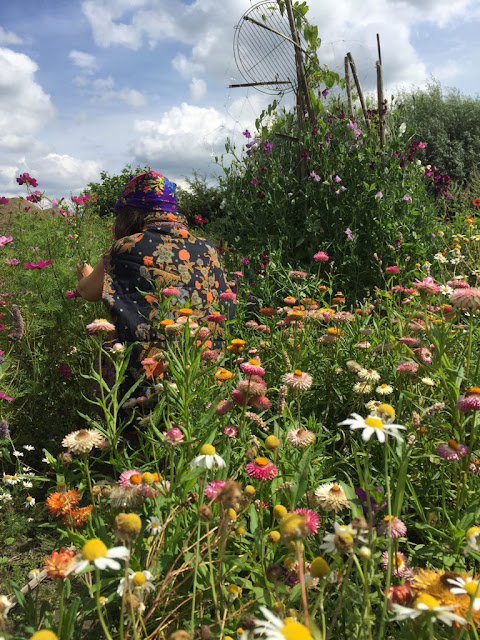 On my Batik Statement I'm wearing a body warmer, made for my mother from a, yes fake, batik my grandmother bought and a skirt, my grandmother had made on Java. The fake printed textile is based on the famous designs by Oey Soe Tjoen. My mother wore this for years when she was working in garden and I got it from her when I was preparing for my first journey to Java. Normally I would always go for a real Batik-Batik Statement, but with all the copying going on of the Buketan motif a fake copy fits the story, doesn't it?

Photos made by Koen de Wit, Thank you!