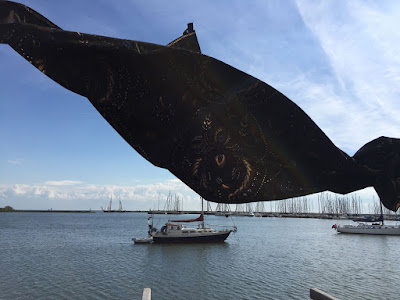 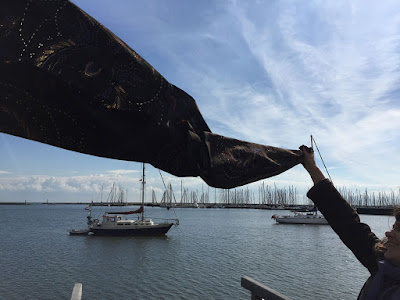 The end of Summer is here and Batik Day is around the corner. Time for a new Pattern Edition of my Batik Statements. With this series of 'statements' I try to explain the meaning of a pattern or motif. During my journey on Java last year, I noticed that every dot or line on a Batik has a name. Sometimes the Batik as a whole represents something, but also every individual detail has its own name and meaning. To learn a little more about Batiks and their story I thought it would be nice to capture their meaning in Batik Statements.

Let me introduce: Pisan Bali
The first time I clearly saw this motif was last year around this time. I was given a tour through Batang meeting different Batikmakers. One of them was the lovely Ibu Rasminah who is also featured in my film 'The journey to Batik, Tari Batik'. She was just finishing this Batik with a big motif on it. It had its first colour bath, blue, and was ready in wax for the second colour bath, brown. Eight big orchid flower shapes formed the base with in between a smaller Garuda winged motif. At the time the pattern was described to me like a kind of seashell.
A week later I returned to the Batang region to film. Arriving at Ibu Rasminah she showed us the finished Batik. It was wonderful, a deep dark cloth with a big yet subtle motif on it, I had to have it and I'm very happy I bought it.
After this first clear encounter with this motif, I started spotting the orchid flower shapes on more and more Batiks, big and small. In the Fashionshow at Museum Pekalongan, in Batiks I already owned and in newly bought ones. There had to be a story for this pattern.
Looking for something else, I found the motif online with the name Pisang Bali. I started googling and found a description that it was a lar motif, wing shaped pattern, like Garuda (note: I will put Lar & Garuda on the list for this series).
I read online that it was called 'Pisang', as in Banana, because it was an abstract version of the banana flower. If you ever saw a Pisang flower, which is beautiful, you know this is not what it looks like, not even with a lot of abstraction.
In my books I found the motif as Pisan Bali, without the g. After asking Pak William Kwan about this, he explained; Pisan means once, Bali means returns. This Batik motif symbolises loyalty. Once you commit to a vow, a promise, you have to keep it.
I read somewhere (sorry, I have the info but forgot to write down the sources, terrible) that the motif was popular to give to travellers, seafarers, who were leaving to wish for their safe return.
Be safe and come back soon!

Thanks Batik expert William Kwan Hwie Liong for the information!
Thank you Koen de Wit for taking the pictures and making the GIF!
Pictures were made at Zuiderzeemuseum in Enkhuizen (NL) 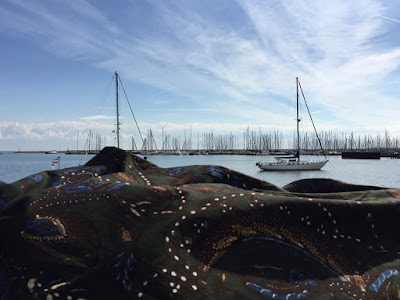