Too Sad to Talk 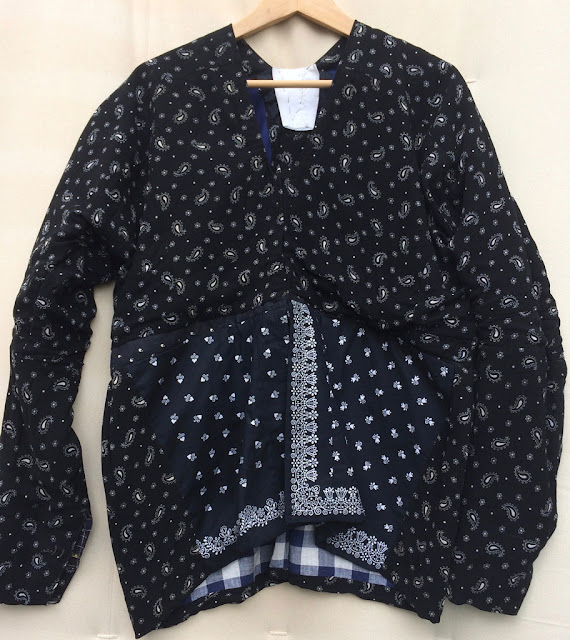 After getting this mourning wear jacket, 'Jakje' in Dutch, from Spakenburg I have been thinking of its meaning and function. While trying the jacket on two ladies sitting in the café of the Museum Spakenburg dropped their knitting needles.
"Do you like it?" asked one, yes, I replied
"Fits perfect", the other one, yes, it fits good I guess
"Do you like it?", yes, I think I'm going to get it
"Are you going to wear it?", yes, I think so.
"You know its Mourning wear", yes, I guessed as much.
They were fussing, pulling the jacket and discussing the price with the lady working there. I wanted it, but I didn't know if it was okay. One kept asking if I wanted it, the other said, she wants it, I can tell. I thought the jacket was newly made after an old design. It turned out is wasn't. It was secondhand, or as one of the ladies put it "No one can make that anymore, they are all dead"...

After examining the jacket, we found all these little mended parts, new pieces of fabrics added and repairs. The jacket was also clearly worn by different wearers or at least was repaired by different people. Most repairs were done with much detail and care, but probably the last one, was done fast and without finishing it neatly as all the other alterations. A jacket tended to for many years while it was worn during the roughest times. 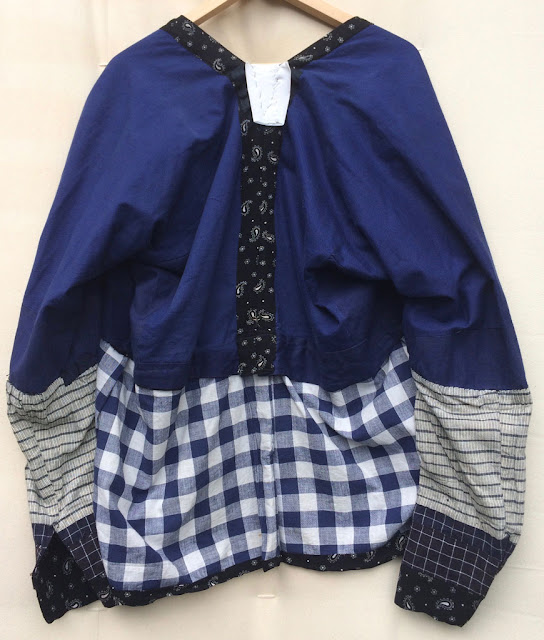 Inside out, at least 9 different fabrics were used in this jacket 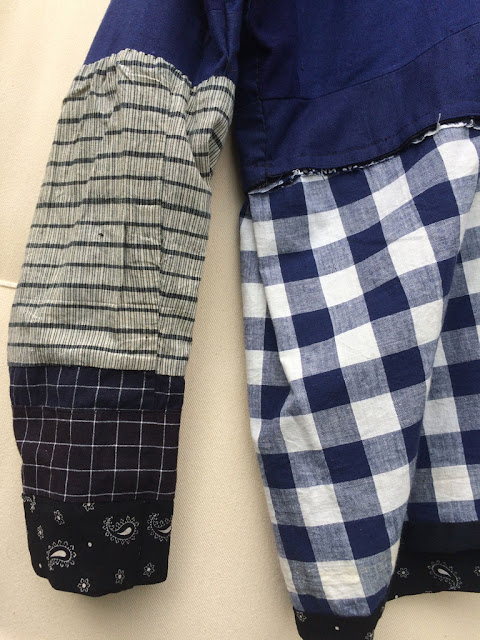 I'm so surprised by the details on the inside
and I wonder if they are pure practical re-use or are these pieces used for a reason? 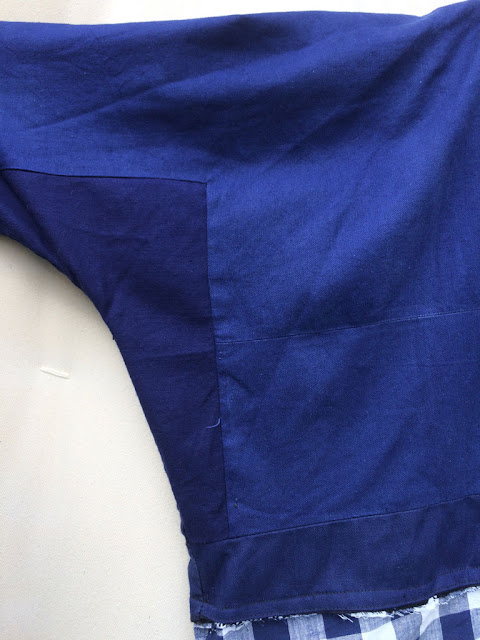 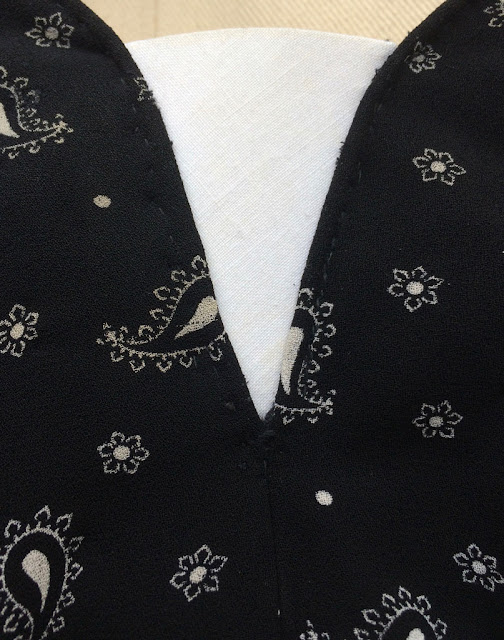 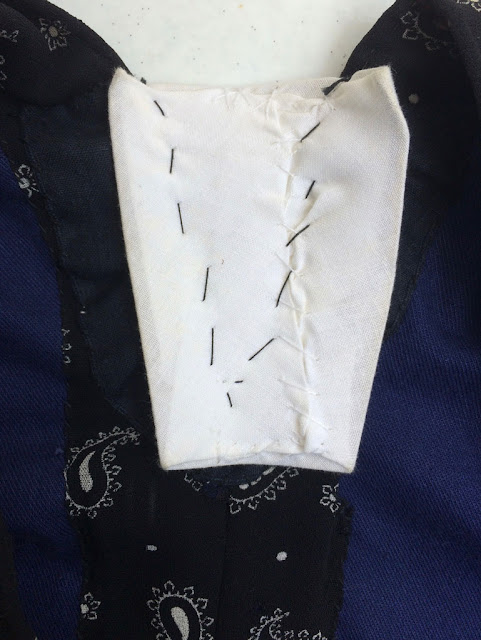 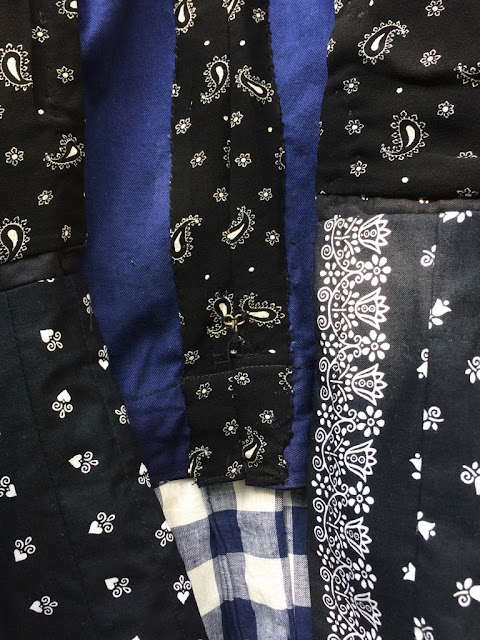 There are so many different traditions of showing grief in clothing. We assume that black is the ultimate colour for mourning, but probably it is more the go-to colour when people want to dress fancy aka smoking & the little black dress. Black was considered a fancy colour and still is. First because it was difficult, and therefor expensive to dye textile black. Later it had already reached its status and became easier to get, so everyone wanted it. As mentioned in 'Fragments Of' (see my previous post New Perspectives on Traditional Wear, which is in Dutch) in Brabant people wore black almost daily, and specifically for funerals & weddings. And it was common in more places to wear a black wedding gown.
I read somewhere there is a tradition of wearing torn clothing during a funeral, I forgot were and why (if you know, please comment below). It had to do with honouring life and showing your grief. I liked that idea.
In the Netherlands every traditional wear had its own set of rules. On Marken they have seven gradations of showing mourning in their clothing. In Spakenburg, were this jacket is from, after a first period of wearing black comes dark purple and after that five years, five years(!), of light purple. At one point you end up wearing mourning wear always. And this is one of the main reasons traditional wear, in the Netherlands, disappeared. The strict rules of mourning. The clothing didn't only express your loss, your feelings, it also came with a pack of rules. You had to act the part, you weren't allowed to do certain things. Going to festivities, go dancing and I'm sure there were a lot more things you couldn't do. I don't know if the rules were the same for man and woman...So it wasn't just expressing loss but actually acting appropriate after loss. Which in some cases would be more acting then feeling I'm sure. But I still think when it comes to expressing feelings with clothing, I wouldn't mind a kind of mourning wear. Not one that makes the wearer act a certain way, mourning is a personal process and shouldn't been surrounded by rules, but one that works for their surrounding. If you are too sad to talk, how great is it if your clothing can do the talking. 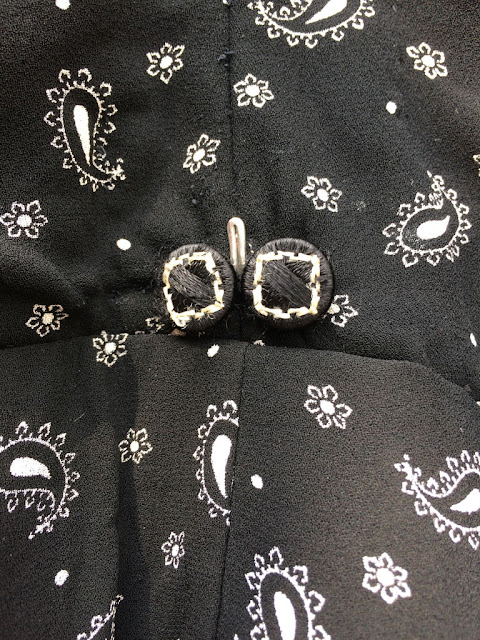 The back, outside with embroidered buttons 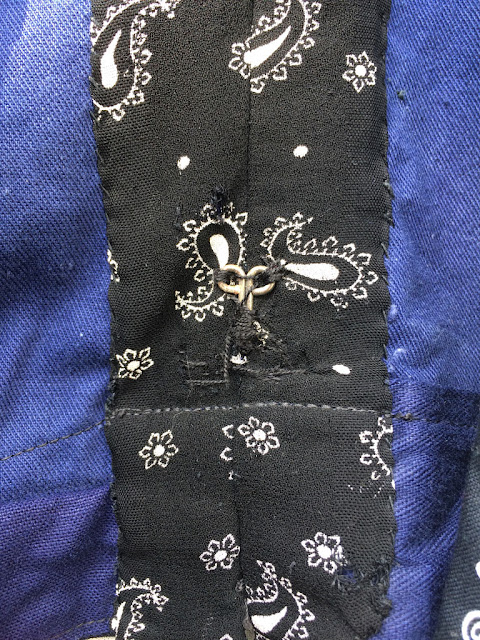 The back on the inside

I'm personally never dressing to my mood, I like to wear clothing that makes me happy. It has to do with people here wearing a lot of dark or "neutral" colours. Why wear gloomy colours when our skies are already grey... and if you look at our traditional wear traditions, gloominess or colourless is not really how you would describe our historical way of dressing, so why the gloomy colours? I always wanted to go against it. I don't wear black (got some black basiscs) and I never wear blue demin jeans. Both clothing choices were made when I became a girl. Sounds maybe weird to put it that way, but that is how I felt when I was 14 years old... Or better said, I embraced being a girl. It had not so much to do with dressing 'girly', I just wore jeans all the years before that and started a new chapter. I started adding more colours to my wardrobe and being totally fascinated by the art movement 'Impressionism' influenced my choice not to wear black also. Dating a gothic a few years later changed that for a while, but still black is hard to find in my dressing choices.

I'm still not sure if it is okay for me to wear this jacket. I think I can, because I'm outside of the tradition. I'm actually thinking of wearing it inside out. The most mended side on the outside. Honouring this handmade beauty and not offending anyone with the actual function of this jacket.


Strike a pose while fitting some traditional Spakenburg mourning wear🙅🏻🖤I spotted this jacket in the gift-shop of Museum Spakenburg🖤At first I thought it was newly made in traditional style, but it is actual wear and has traces of many years of being worn, changed and altered 🖤A wonderful piece which of course I had to have💕❣️#jakje #jacket #traditionalwear #traditionaldutch #mourning #spakenburg #museumspakenburg #black #patrern #handmade #exploringdutchculture Photo by @koendewit 😘
A post shared by Sabine Bolk (@sabinebolk) on Aug 21, 2017 at 1:26am PDT


Mourning wear within traditional wear is an interesting topic which I definitely will re-visit in the near future, for now read more on:

The colour black in 'Past & Present: The Color Black' on Design*Sponge

Article 'An historical overview on dyes, dying and fabric colors in the Renaissance'