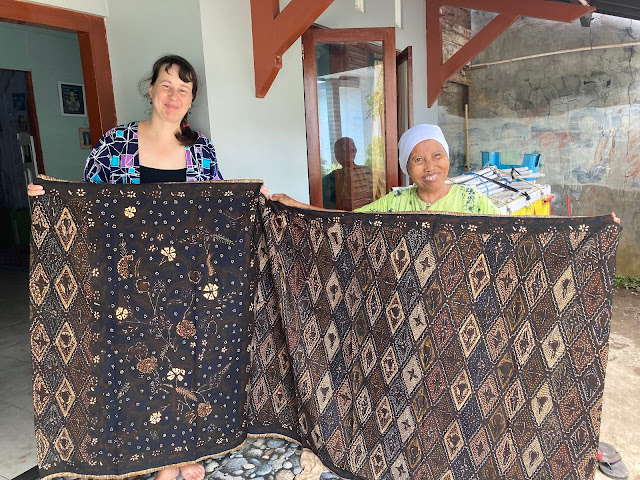 Together with Ibu Rasminah in Batang
The last train ride after the last bus right. Catching up on some writing which will probably find its way online after my return to the Netherlands. But let's see how far we get.*
After Semarang I made my way back to Pekalongan. Only a short train ride away and a short drive with Grab I was welcomed so warmly by the people at the hotel I stayed in before. Every day they would ask where I would go, or where I returned from and be like “wow”. Now they had followed my journey online and were excited to follow the next days ‘live’.
For the first day, Tuesday 15 November, I asked Mas Qomar if he had time to accompany me. Me and Mas Qomar drove around in the region in 2016 when I made my short film. To be here with Mas Qomar again was so much fun. How he is welcomed everywhere with laughs & food, reminded me of last time, including the sound of him eating kroepoek through my recordings, haha.
First visit we made was to Ibu Rasminah. Met Ibu Rasminah in 2016. I was two days visiting pembatiks in the region Batang and it was the last stop we made. She had already heard I was making visits and thought we forgot about her… Her warm laugh draw me right to her. A week later I filmed her and heard it more often while she made a repeating pattern she found boring for me to film. In 2019 we met at the event hosted for pembatiks in the region during which I screened my short film featuring her. Sharing laughs with her now again was just so wonderful.
Now I returned, finally, with Mas Qomar who accompanied me the first visit also, so full circle again.
Happy to find Ibu Rasminah in good heath, 72 years and still making batik every day. Here again I found a bigger pile of stock than usual. Depended on local sells & resellers who come by, covid is still making it very difficult in this region to sell batiks.
Ibu Rasminah style is unique for the Northcoast working in a dark sogan brown with repeating, abstract motifs. A rough line, but very effective patterns that pop from the cotton.
She wanted to pose with me with every motif she had available and she wanted me to send them to her. Luckily her granddaughter later come in with whom I exchanged WA. After every photo Ibu Rasminah wanted to check them, so cute.
While Ibu Rasminah was a long time alone in producing her batik, we learned now that her daughter took up the canting too. With 52 years old not the newest generation, but very relieved the designs are being passed on. Haven’t met Ibu Sri Hartati yet, the batikmaking daughter, but bought two batiks made by her while the others are by her mother. We waved goodbye, wishing we will meet and laugh again next year. 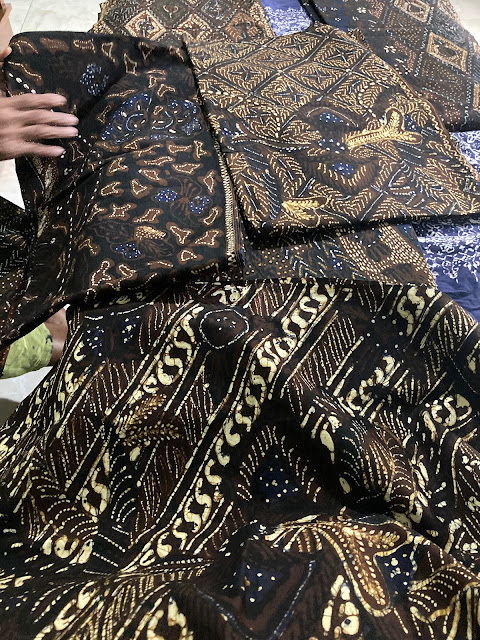 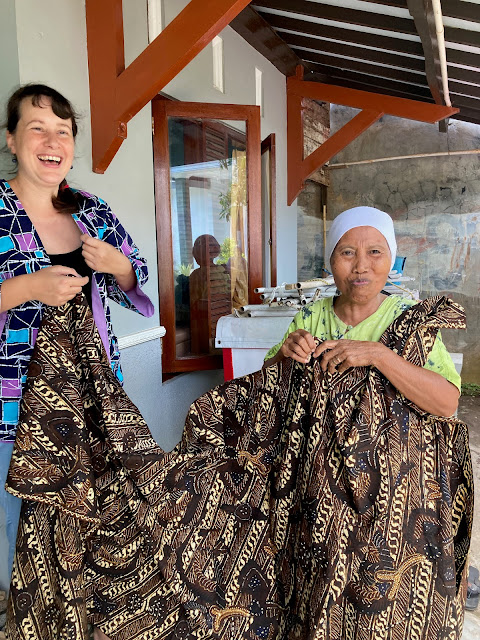 Laughs with Ibu Rasminah
After Ibu Rasminah, I revisited Mak Si’Um. I wanted to revisited more pembatiks to discuss the exhibition further, but some of them were sick… Luckily they recovered fast, but could not see them this time.
So finding Mak Si’Um in good health and working hard as ever was comforting. As always, the whole family was within minutes after my arriving at the house too. They had practical questions, mostly about the wish for Mak Si’Um to attend the opening and how she would get to Jakarta. It was good we could talk it through and they proudly showed Mak Si’Um was already working on new stock for next year. 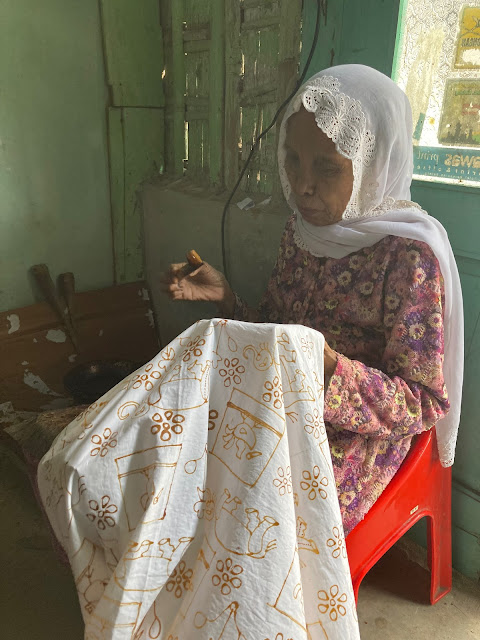 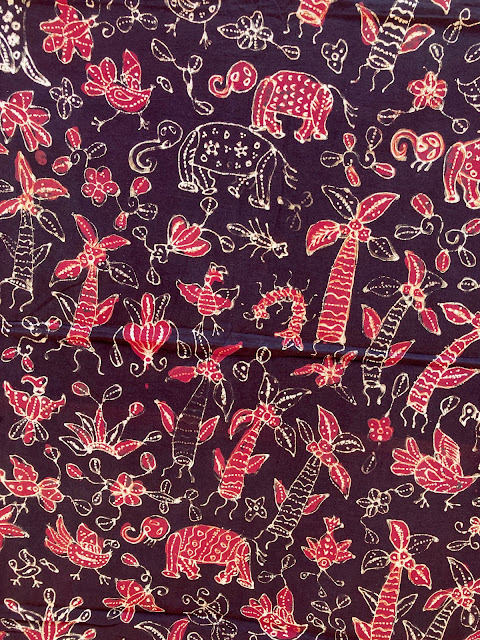 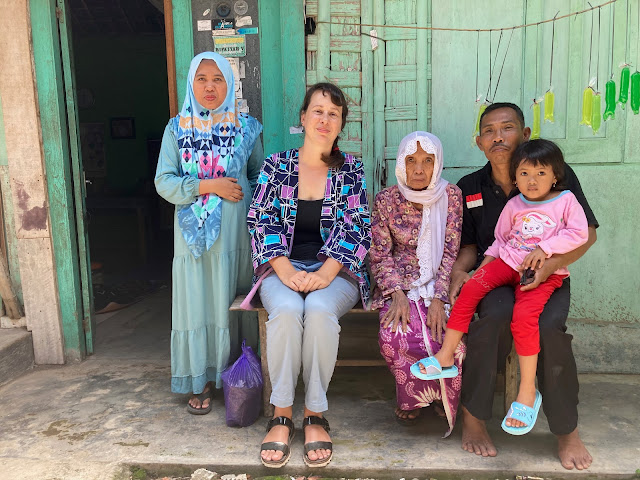 Posing with part of the family
We visit a maker I had not been to before too, Ibu Rujaimah in the desa Masin. The style described as typical for the region is very colourful, full of flowers & birds with much detail. A mixture between the style of Pekalongan from the past and Batang from the present. The granddaughter  Mbak Salmah does the business side of things and we talked about how her nenek’s design were recently copied by another maker in the region that I know well… Seeing now the orginals, the quality is much better, because of course it is the original… The copying of the batik in batik was not the worse, I was told, the designs got also copied in print…So till now the batiks being more visible online through different organizations and events is not yet helping this maker...I advised the granddaughter to start up their own Insta since sells from here seem to work well for makers in the region. And she already did, so go follow here > 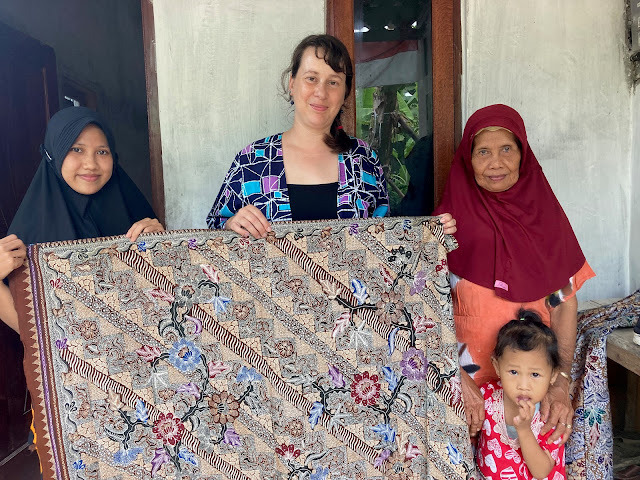 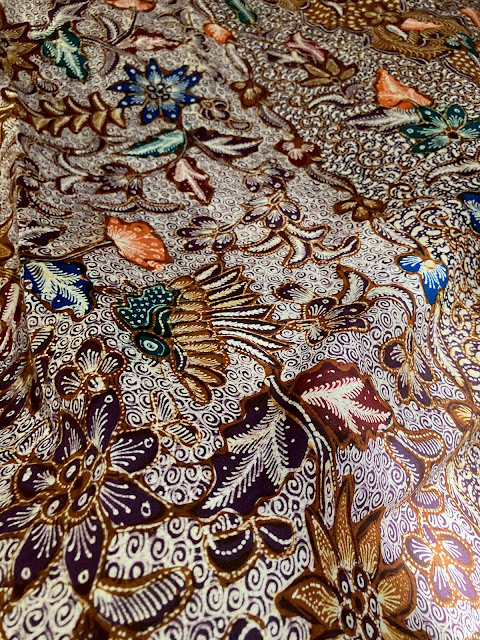 Close up of Ibu Rujaimah Batik
Next to pembatiks, I got to meet a cantingmaker, Pak Jazi. Apparently last of 3 in the region and last time I met his student.
Pak Jazi workshop is not more than a small hallway where he and his family produces cantings for Pekalongan, Batang & Cirebon. Up to 75 canting a day from the finest to the thickest sprout. He demostrated how to complete a canting. Within seconds he cut from bamboo the handle. Amazing to see the ease with which a true craftsman works, so much skill in those hands!
It was wonderful to see, but it also made me a little sad. Wish all parts of Batik craft were being celebrated more and not just the craft, the maker too! 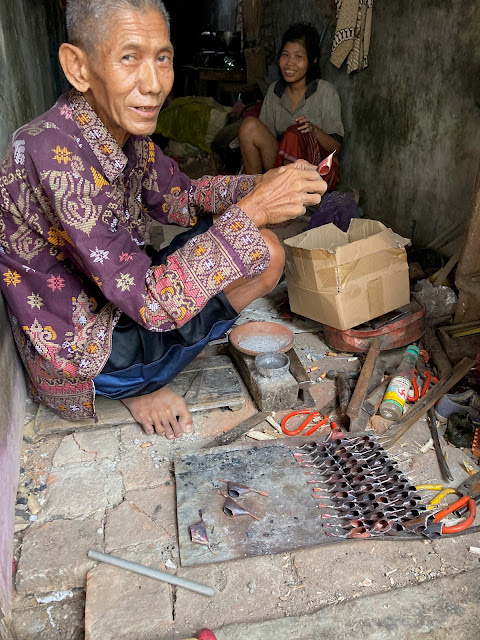 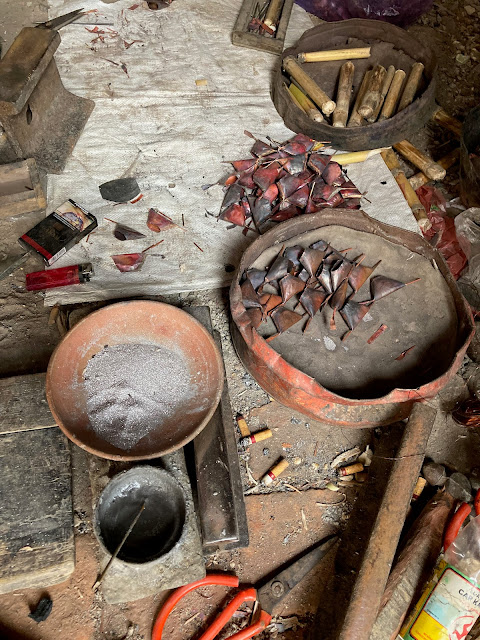 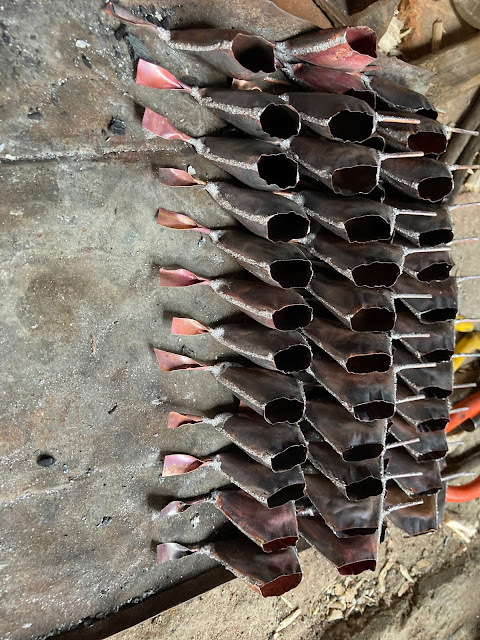 Ready to go in the fire for the final melt
The next day, 16 November, was why I returned to Pekalongan, to film Ibu Widianti of Oey Soe Tjoen. I was really nervous, because I went by myself, but it went really well, I think. I am so happy I could interview her for next years exhibition. Talking on and off camera, provided new insights and her views on Batik are actually very similar to mine. The future of Batik might not look bright, but I still believe all this passion I see in Ibu Widianti and the others I met this journey could bring Batik to future generations. 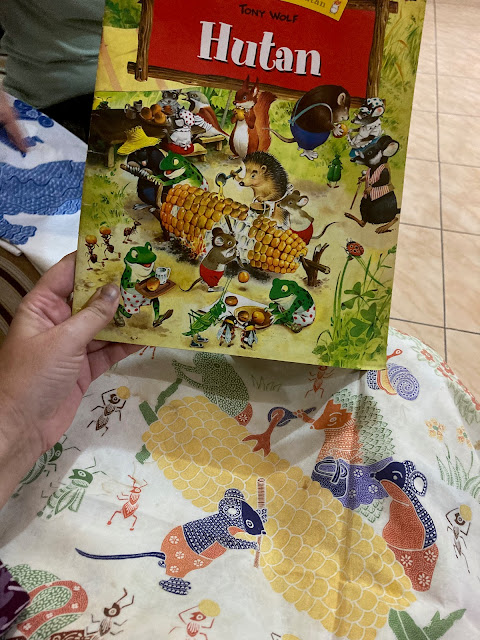 New Batik by Ibu Widianti with the original book 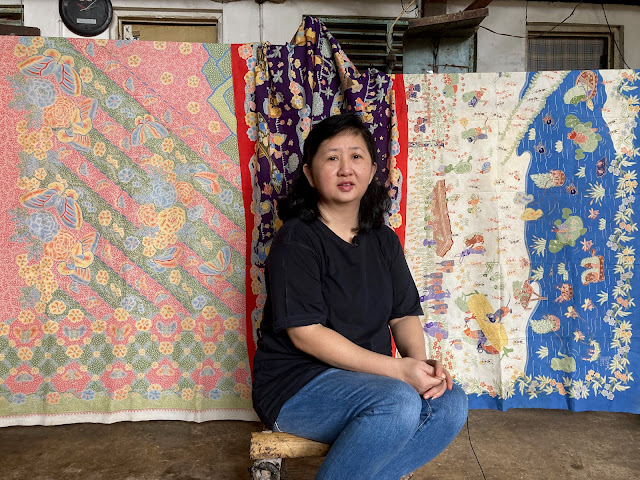 Ibu Widianti after the interview 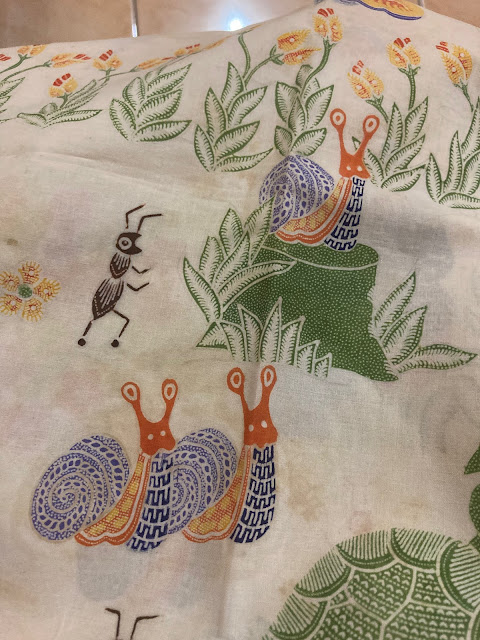 Another detail from the new batik by Ibu Widianti
Talking about that, I got connected with some in Pekalongan. A new generation who started exploring real batik coming from families who make printed textiles & ‘dusters’ (a kind of nightgown worn by most women on Java at home). An exciting development I am totally here for!
The first I met was at Museum Batik. The exhibition was ready showing new batiks from the collection. After looking around batik teacher Mas Roman asked my thoughts on it. I told him there were two pieces that really caught my eye. Two batiks in a classic Buketan design yet the use of colour and graphic background made it very now.
A few moment later I was surprised by a visit from the maker, or better producer, of the batiks, Mas Falahy. It was great to hear from him directly his motivation for these batiks and to dive into batik. Coming from a printers family, Batik was not made before in their workshop, but now they produce Batik Tulis. What an inspiring step & so good Museum Batik supports these efforts! 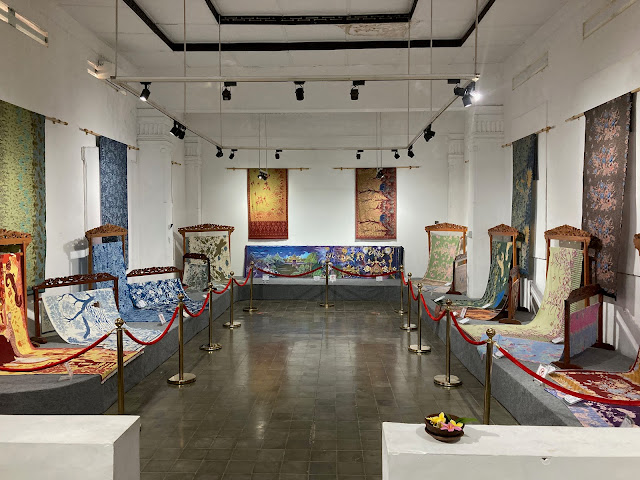 Overview of the latest exhibition at Museum Batik in Pekalongan 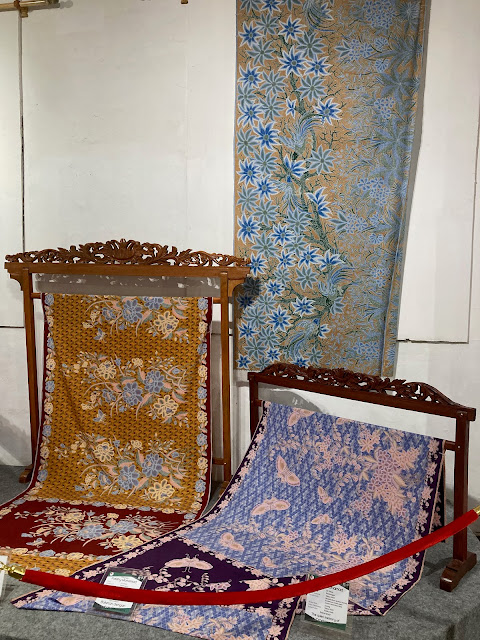 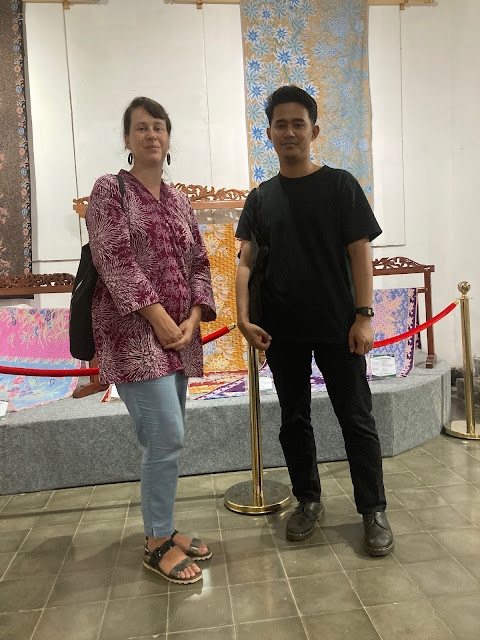 With Mas Falahy
Another one I met reached out through Insta when I was in Pekalongan before. However we didn’t manage to meet. So I contacted her when I got back.
I met with Miss Mila and her mother of Molafi on 17 November. Miss Mila already expressed that she was a big fan of my work, but I did not realize her batik journey was sparked because of my journey to batik. Her mother was telling about how my insta made her daughter want to work with batik, and not just work with it, study it. That she actually started this semester at the university to study Batik. I feel so honoured!
Miss Mila comes from a family who sells ‘dusters’, a big industry on Java. Her mother and grandmother sold them from the old Dutch house in the city center. Now Miss Mila wish is to turn this dusters shop into a brand using real batik! She gifted me one of the first products she made & her mother insisted on giving me a duster, which I will gladly wear at home! So nice to meet Miss Mila and her family, looking forward to follow her batik adventure! 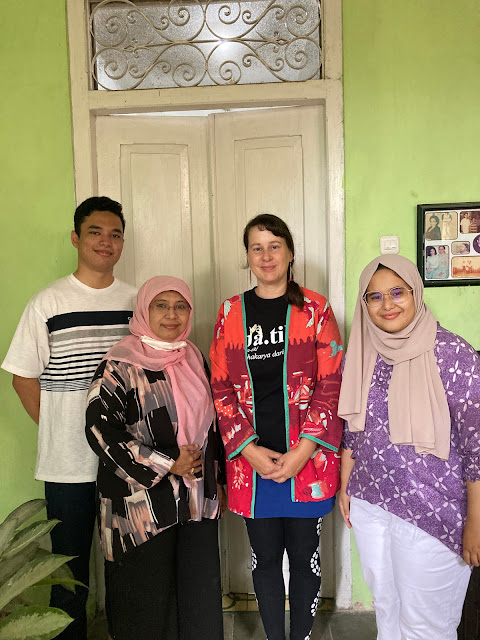 Miss Mila, her mother and brother posing together while the sister makes the photo
It was good to return to Pekalongan, got to  see and meet the people I couldn’t last time, revisit the pembatiks, and people at the museum. Which is always so funny, because I walk in and it is just “Hello miss Sabine” as if I was there yesterday. I feel so senang, so welcomed and want to say thank you Mas Dewa, Mas Qomar, Ibu Nur and Mas Roman for this!
* posting this while waiting I Dubai for my last flight back home 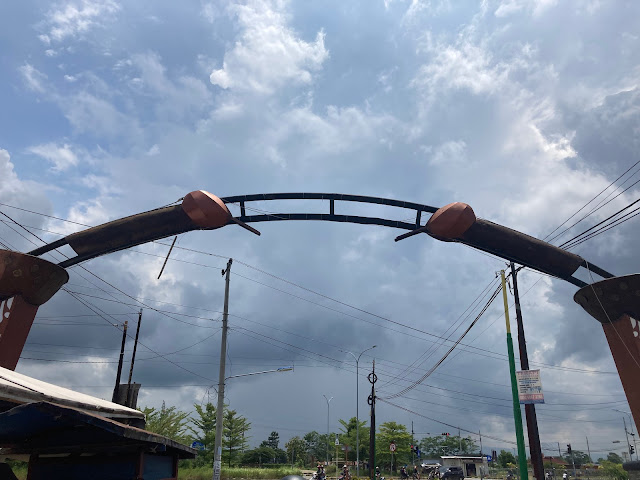 Pekalongan & Batang have numerous gates decorated with cantings,
but most regions have actually no pembatiks/batikworkshops anymore

Email ThisBlogThis!Share to TwitterShare to FacebookShare to Pinterest
Labels: Batik, Journey to Batik 4